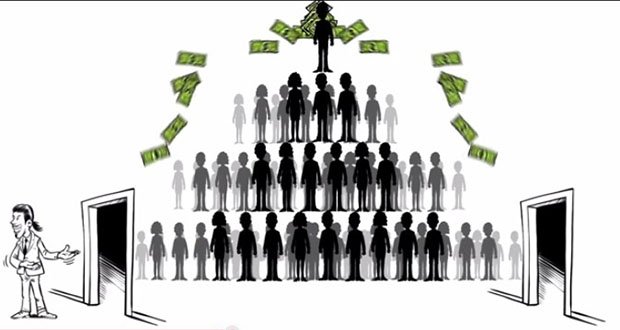 So one of our readers asked us this question the other day: What’s the difference between a matrix scheme, pyramid scheme and Ponzi scheme?

Ponzi Scheme: A Ponzi scheme is when you ask someone for an investment and promise a huge or quick return on investment, then deliver on it by promising someone else the same thing and paying off the first person with someone else’s investment.

Example: At lunch time, Dwight says to Ryan “If you give me your pudding, I’ll give you two puddings tomorrow.” Ryan agrees, and gives Dwight his pudding. Dwight then goes to Phyllis and Stanley and says the same thing. They both agree. Now Dwight has 3 pudding packs, eats one, then the next day gives the other two from Phyllis and Stanley to Ryan to follow through on his promise. Ecstatic about his return on investment, Ryan is more than happy to give Dwight even more pudding containers. He gives Dwight 5, Dwight eats one and gives the other four to Phyllis and Stanley as a return on his promises to them. They too are happy with the return on investment, and invest even more pudding packs in the hopes of doubling their investments. In order to sustain this, Dwight needs to continuously get more people to give him their pudding to pay off his debts to others while simultaneously taking a pack for himself each time.

Pyramid Scheme: The classic red flag of a Pyramid scheme is when someone who is looking to “hire you” tells you you need to “invest in your future” or that you have to “spend money to make money.” The days of a recruitment pyramid scheme are falling to the past because people have caught on to the premise of basically investing in nothing. So nowadays to keep it legal, Pyramid schemes have to offer some kind of tangible thing which is usually something pretty petty or worthless / has marginal value. Basically what this is is a system where one person at the top recruits a bunch of people who invest in something and they only see a return by getting more people to invest in it through them. The closer to the top of a pyramid someone is /the more people you have beneath you, the more money you make.

Example: Phil drives a corvette, and Michael wants to know the secret to Phil’s success. Phil tells Michael he’s made a fortune selling calling cards, tells him they are the wave of the future and that they sell themselves. He tells Michael that the real secret, though, is to buy a bunch of calling cards and then sell them to other people who can then sell them for him. Makes complete business sense, right? After all, you’re just being a middle man. That’s how Michael justifies his investment in calling cards; the only catch is that Phil wants Michael to cover the full costs of the calling cards that Michael purchases from him, and then Phil gets a percentage of Michael’s profits from what he sells. In order to make money back, the quickest way isn’t to actually sell the calling cards but to recruit Ryan, Jim, Toby and Stanley to buy them in large quantities from him with the intention of making a fortune selling them themselves after making a large initial investment, with Michael also taking a percentage of their profits and as a result Phil making a percentage of their profits transitively. The higher up you are on this pyramid, the more you are making off of the people beneath you. Regardless of whether or not they actually sell any calling cards, the “initial investment” on the part of the recruit/salesman is where the people higher up in the pyramid really make money.

Matrix Scheme: This is when you pay a small amount to be on a list of people who could win something significantly more valuable than your initial investment. The more contributions you make, the higher your odds become of being the person who wins the larger prize.

Example: Dwight, being the scheming assistant to the regional manager that he is, has some shady ways of being the best salesman at the office. His secret is the matrix scheme. He calls clients who are interested in getting a brand new Sabre printer. Unfortunately for clients, Dwight knows that he can make more money profiting off of hope than profiting off of printer sales. Dwight tells his client that if they pay twice as much for printer paper, they will be placed on an exclusive list of people who can receive a FREE Sabre printer. Can you hear him saying “What if I told you you could receive a FREE Sabre printer just by buying more paper?” But there’s a catch: there are about 20 clients ahead of them on that list. The more orders of overpriced paper they place through Dwight, the closer to the top of the list they get. Eventually one of the clients receives a free printer, meanwhile, Dwight has sold so much paper at such a high-profit margin that the cost of that free printer is insignificant.

AskUs: Where do internet providers get their internet from and why can’t we make our own?