So one of our readers asked us this question the other day: Why are fiber-optic connections faster? Don’t electrical signals move at the speed of light anyway, or close to it?

It’s got nothing to do with the speed of light. Sure there are differences, but that only affects latency a little, not really speed. It’s more to do with how fast you can turn the signal on and off.

A fiber optic cable can carry hundreds of signals/streams at once. More signals equal more throughput. But so can electrical. Just look at your cable TV connection – 200+ channels, and all sent over one wire. It’s the same principle – different frequencies on the radio dial. Fiber uses the same principle, and can carry 100+ channels, but the frequencies are represented by different colors, split and combined using a prism – though you cant see these colors as they’re deep into the infra-red (like how you cant see the light from your TV IR remote). The main difference is that electrical signal has a limit to how much total combined speed it can carry.

Let’s look more at the differences between electrical and fiber signals. 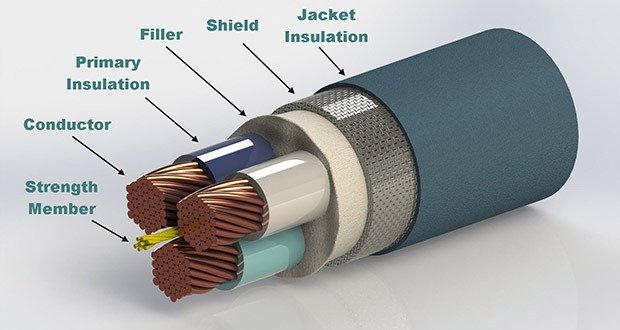 Electric cables are susceptible to noise. Think about if your mobile phone is near a speaker and you get the buzzing. Lots of things aside from your phone can give out this interference – power lines, other cables in the same duct, TV/Radio stations, even background radiation from space. Now imagine that over a very long cable between two cities and you’re talking about a lot of noise on the signal (like radio static on a weak station). Even shielding them only reduces the noise to a certain extent. As well as receiving noise, electrical cables radiate signals – they are like a long antenna, some of the signal gets radiated and lost this way so it gets weaker.

Fiber signals aren’t susceptible to noise. A solid black tube can’t pass any light at all, so the fibers within the cladding are completely blacked out from external light. (Note there can be really tiny amounts of noise from quantum effects and the electronics at each end, but its minuscule compared to electrical.) The light within the also doesn’t leak out. Refraction is like a near-perfect mirror, keeping the signal bouncing inside the fiber for a very long distance.

So we’ve established that electrical signals get noisy, and fiber optics don’t pick up interference. Next, we have signal degradation.

Electricity has “inductance”. This manifests itself very similarly to physical inertia, which means it resists being changed. Heavier objects are harder to move and stop than lighter ones. So electricity has the same thing, it takes time to change the signal – which is what happens when the zero and one bits are transmitted. The longer the cable, the more the inductance (i.e “inertia”), so the longer it takes to change that zero to a one. Therefore you have to send signals at a slower rate to allow the electrons to keep up with the changes. There is a similar related effect called capacitance which also slows down the maximum rate of change.

Light has no inductance, (so there is effectively no “inertia”) – therefore changing it from zero to one is pretty much instant. That means you can change it much faster – more “bits per second” – regardless of distance. (note it’s not really “inertia”, the above is mostly an analogy, but it behaves like it).

Next is resistance. Electrons are large (compared to photons), so they interact with the copper atoms as they travel through the wire. This interaction is analogous to friction. Friction creates heat, which is where the energy goes. In a wire, some electrons lose energy in the same way as heat (which is why power cables can get hot when carrying a lot of current). So over a long distance, much of the signal diminishes due to resistance. For high speed signals (1-10Gbps), this typically happens within a few hundred meters. Not very useful when you need to get cat videos between cities! 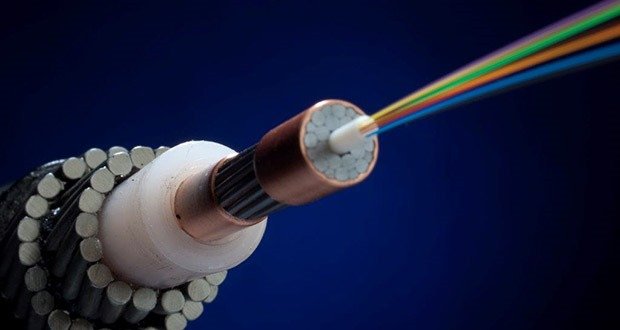 Light interacts much less with fiber optics – the photons are tiny and much less likely to interact with the glass – especially as it’s super clear specially made glass. The signal can travel up to 100km before it gets too weak for the other end to “see”.

So we have problems of “interference” and “signal degradation”. Electrical gets both problems, fiber only degradation, and much less so. Eventually the signal degrades to such a weak one. For electrical signals, the noise from interference drowns out the original signal and you can no longer detect it. For the speeds that matter (1Gbps to 10Gbps) electrical signals are drowned out after just a couple of hundred meters. With fiber, the degradation happens after around 100km (depending on the power of the lasers at each end). There are other interesting effects with fiber (e.g dispersion), but they are more advanced topics.

When the signal starts to get weak, but before it’s too weak to extract, you install an amplifier to boost the signal. It’s much more feasible and economical to install fiber amplifiers/repeaters every 100km than it is every few hundred meters for electrical and that’s why fiber is used for anything except short network connections (usually only inside buildings).

In short, high speed electrical signals can only travel ~100m before they get too weak and drowned out with noise. Fiber optics don’t pick up noise and the signal can travel 100km before you need to amplify it.

AskUs: Does the weightlessness affect blood circulation in astronauts?

AskUs: How did the African slave trade affect Africa’s culture and population?