So one of our readers asked us this question the other day: Why are there no ancient Native American cities in North America? 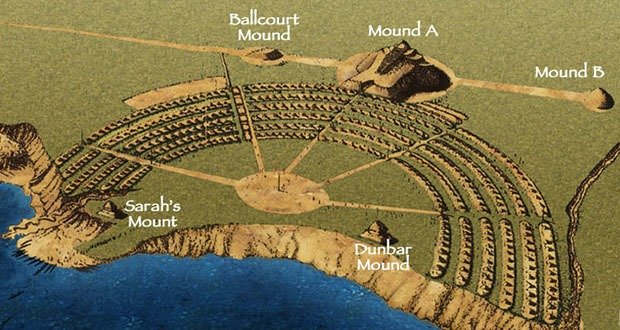 There are many large towns and cities north of Mexico, and their history is as long and rich as those in Mesoamerica. The oldest such site is Poverty Point in Louisiana. The above image depicts a partial reconstruction of the site. It’s a bit out-dated since additional housing areas have been discovered since that image was made, particular around the “Ballcourt Mound.” The core of the site consists of six concentric semi-circles, on which rows of houses were built, and several large earthen pyramids. Mound A, also known as the Bird Mound, is one of the largest earthen pyramids in North America and wouldn’t be surpassed until the Mississippians began constructing their own pyramids thousands of years later. The site was occupied from 1700 to 700 BCE, making it a few centuries older than Mesoamerica’s Olmecs (though not as old as the little known pre-Olmec Mokaya, currently the earliest known sedentary culture in Mesoamerica). Poverty Point appears to have been the epicenter of a culture that was found in a large portion of the lower Mississippi at this time, and it engaged in long-distance trade with partners at least as far away as Lake Superior.

I’m going to skip ahead in time a bit to the Mississippians beginning around 1000 CE. Interesting things were going on in the intervening time, but some significant events occurred at this time that are relevant to your question. First, in the west, we have the rise of Chaco Canyon, the hub of Ancestral Pueblo (Anasazi) culture at this time. Here, massive Great Houses were built, the largest at the site was Pueblo Bonito (reconstruction pic above). There are many such Great Houses in the Southwest, both at Chaco Canyon and elsewhere. Around this time, the oldest continually inhabited settlements in the United States were founded, Acoma Pueblo and Taos Pueblo. 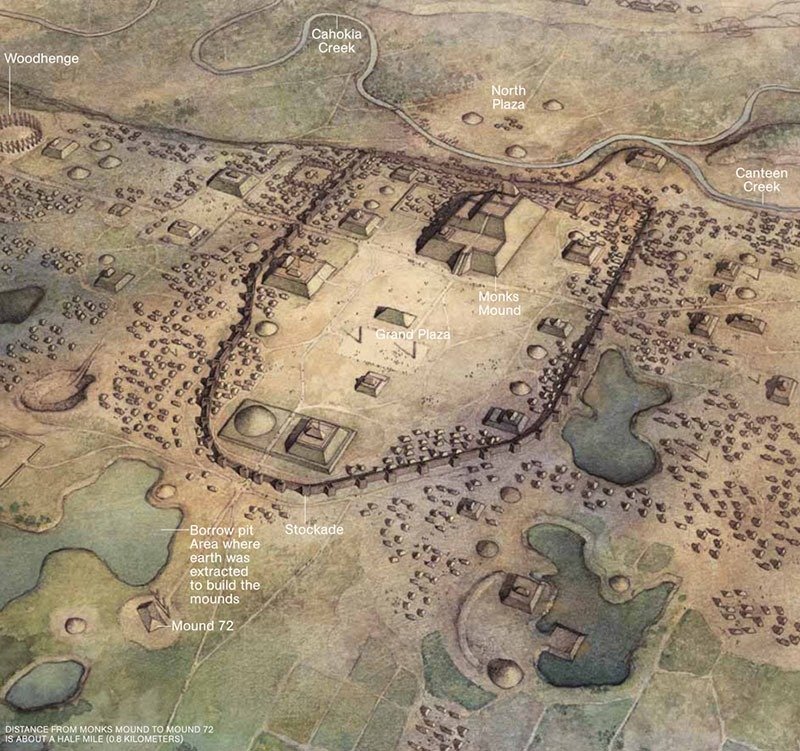 Back in the east, this time sees the rise of the Mississippian polities. Cahokia is the most famous of these. The above reconstruction focuses on the core of the city, which contains pyramid that finally beat Mound A’s title for largest earthwork in North America: Monks Mound. Until its decline in the 1200s, Cahokia was home to many thousands of people (estimates range up to 50,000). Neighboring sites in St. Louis and East St. Louis were perhaps half of Cahokia’s size (based on the comparative number and size of their earthworks). 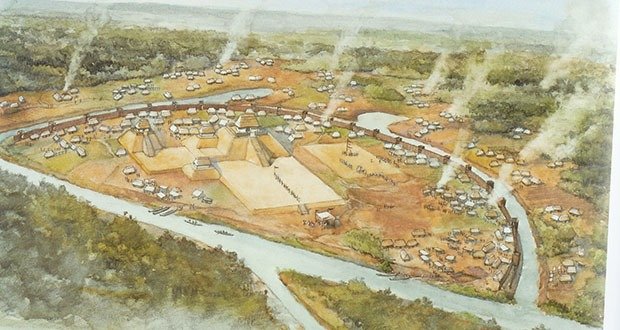 As Cahokia declined, other sites rose to prominence. These included Moundville and Bottle Creek in Alabama,Winterville in Mississippi, Etowah(above pic) in Georgia, Jackson Lake in Florida, and Angel Mounds in Indiana (unfortunately, I don’t have a handy reconstruction for you of this one). Power and prestige would continue to cycle among the various Mississippian polities and these towns and cities would rise and fall over time. Winterville’s power passed to Emerald, a little ways to the south (and incidentally, the home to the pyramid that ties Poverty Point for second place), Emerald’s power passed to the Fatherland Site – or as it’s known historically, the Grand Village of the Natchez. Etowah’s power went to Coosa, which united the southern Appalachians from the Virginia-Tennessee-North Carolina tri-state area down into east-central Alabama. Site Coosa occupied at the time of contact would be abandoned in 1600s, but a new Coosa was built to replace it and became one of the four Mother Towns of the Creek Confederacy. Bottle Creek would remain in power until the mid-1500s. Jackson Lake was disbanded around 1500 and its people, the Apalachee, established two new seats of power at Anhayca (now Tallahassee) and Ivitachuco. In 1608, a Spanish priest reported 36,000 people in Ivitachuco when he was invited to mediate a peace summit between the Apalachee and the Spanish-allied Timucua to the east. Angel was disbanded around 1450, when its citizens burned and buried the building that once stood atop its largest pyramid. They went on to found the Caborn-Welborn culture, a confederacy of large and small towns based around the mouth of the Wabash River. The Caborn-Welborn were recent enough to have received European trade goods, and were probably driven out of the Ohio Valley during the Beaver Wars of the 1600s (they’re most likely one of the Dhegihan peoples or a related Siouan people like the Biloxi or Ofo).

AskUs: Why have we not used IVF to impregnate an elephant with a wooly mammoth yet?

AskUs: How come Venezuela is in such a poor state if it has nearly 300 Billion barrels of proven oil reserves?