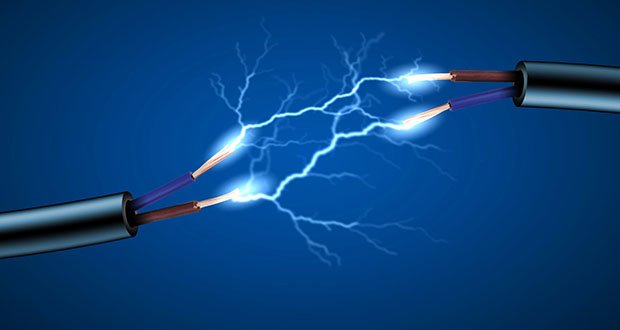 So one of our readers asked us this question the other day: Why is AC better than DC ?

A more mathematical explanation has been pushed below.

We’re going to think about it like water. If we want to transfer energy with water, we need to put it under pressure (blowing through a straw) and we need to move it through a pipe. The more water we move under a given pressure, the more energy we’ll transfer.

Water flows through pipes. Bigger pipes let water flow easier. The reason is that water rubs up against the sides and friction causes it to slow down. Larger pipes have a lot more area that isn’t rubbing up against the sides. Think a soda straw versus a coffee straw – a coffee straw is a lot harder to drink with, or to blow air through. But the friction between the water and the side of the pipe also depends on how fast the water is going. If the water is moving slowly, not much heat is generated. As the water moves faster, a lot more heat is generated and energy is wasted.

So ideally we’d like to transfer our water slowly through large pipes to deliver it over long distances. But since it’s a long distance, we can’t afford to make the pipe that large. So the pipe has to be fairly small and thus we need to make sure the water moves very slowly.

Going back to electricity, water pressure is like Voltage, and the speed of the water is like Current. Current times voltage equals how much power we’re transferring. So if we increase the pressure by a factor of 10 – increase the voltage, we can drop the speed of the water – the current by a factor of 10. If we multiply the voltage by one million, we can drop the current to one millionth of the original speed and still transfer the same energy. At those super-slow speeds, the water rubbing against the pipe isn’t going to waste any energy at all.

AC power lets us use a cool device called a transformer that lets us take in voltage and current on one line, and output a different voltage and current with the same total power on another line. We can’t do this efficiently with DC power. So we use AC power because we can step up the voltage to super-high levels, and drop the current to a trickle.

The Short version is that resistive loss of power transmission is a function of resistance in the wire, multiplied by the square of the current. So high current leads to very high resistive losses heating up the power line and wasting energy. Some examples:

Power (energy in a set amount of time) is a function of the voltage on the power line multiplied by the current. So if I wanted to run a winch that lifted up a 1kg weight at 1 meter per second, I’d need a motor than ran on 10 volts of DC power with a current of 1 amp.

So they’re balanced. However, if I had a motor than ran off of a 20 Volt power, it would need only draw 0.5 Ampere. At 100 Volts, it’d need draw only 0.1 Ampere. Then the question goes to power distribution. Why is there a limit to how far we can deliver electricity from a power plant? We have to run electricity through wires. And when we run electricity through a wire, it heats up slightly and loses some energy.

That power is equal to the resistance in the wire multiplied by the square of the current. RI2 = resistive loss.

So lets change our example above a little bit. Now we’re lifting huge wrecking ball that weighs 10,000kg. To lift it at 1 meter/sec would require 100,000 joules/sec or 100Kilowatts. Using our 10 Volt motor, we would need to draw 10,000 Amps. Now lets say that the we have a very thick wire that is 10 meters long, and has 0.0001 Ohms of resistance per meter. So almost no resistance.

We’re burning as much energy just transferring the power to the motor as we’re actually using for the motor.  So lets switch our 10 Volt motor out for a 100 Volt Motor. The power demand remains at 100 Kilowatts.

Still a lot of waste, but it’s actually manageable now. we’re only spending 1% of our power draw heating up the wire during transmission. If we used a 1000 Volt motor, we’d only pull 100 Amps and our restive heat loss would be 10 Watts across the whole thing. A tenth of the energy spent on an incandescent bulb, spread over 10 meters. The wire wouldn’t even be warm in your hand.

So clearly, when transferring power with electricity, we need to keep the current as low as possible because the energy lost is a function of current-squared. We also can’t make the resistance too low because thick wire becomes prohibitively expensive over millions upon millions of meters of power lines. So if we want to transmit, say, 1 Gigawatt 10 kilometers from a power plant to a city, with 6 gauge wire (1 Ohm per kilometer), we need to figure out how bad that will be.

If we step the voltage up to 1 Million Volts, we’d still have 1000 Amps of current, and would lose 100 Megawatts of power – 10% to heating up the power line.

If we get up to 10 Million Volts, we’d need 100 Amperes, and now our losses are 10 x 100 x 100 = 100 Kilowatts of loss. Which is still a ton of energy, but its spread out over 10 kilometers and represents only one ten-thousandth of the energy transferred as a loss.

AC power lets us use transformers, which very easily and efficiently let us maintain the power of electricity flowing, but trade voltage for current. So I can transfer the energy of a circuit running at 10 volts with 100 amps into a circuit running with 1000Volts at 1 Amp. Or 1 Million Volts at 1 miliAmp.

So for power distribution in our country, we generate power at a station, we step it up to hundreds of thousands of volts and transfer it across the country on those massive high-voltage power lines. Those lines go to a few dozen sub-stations located around your town, that step the voltage down to ~10,000Volts. That energy is carried along power lines to neighborhoods, where every 1 to 5 houses share a small green box somewhere that transforms the voltage down to 120 Volts, which is then delivered to your wall outlet.

AskUs: At any point in time has USA come close to launching nukes?

AskUs: Is letting wounds 'breathe' a thing, if so, what purpose does it serve?

September 1, 2016
Latest Posts
Subscribe to Blog via Email
Did you know?
Loading...
Facts of the Day
Registration is disabled.