So one of our readers asked us this question the other day: Why is Australia chock-full of poisonous creatures, but New Zealand, despite the geographic proximity, has surprisingly few of them?

New Zealand separated from Australia about 60-85 million years ago. The expanse of water between them had completely isolated New Zealand’s ecosystem. Now what’s interesting is what happened afterwards.

As you may know, New Zealand is a very volcanically active place. In fact the largest known eruption in the past 70,000 years originated in the Taupo Volcanic Zone in New Zealand around 24,000 BC. We know of eruptions that were even larger: one the same size as Yellowstone’s largest eruption, except it was only 250,000 years ago! And these are just the ones we know about!

Now, before humans arrived, New Zealand had a very strange ecosystem. We have very few native mammals – bats, whales, dolphins and seals are all we’ve got. Otherwise, New Zealand was populated by birds, fish, some insects, geckos and a few frogs. Because of its isolation, and the lack of predatory mammals, birds were the kings of the food chain. This allowed them to evolve into predatory animals themselves, in a way that wasn’t seen anywhere else. 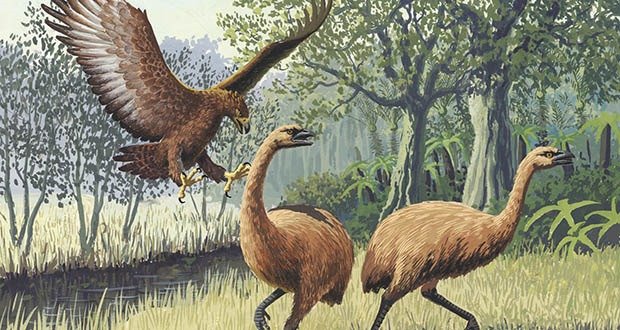 Here is an artist’s impression of the Moa (right) and the Haast’s Eagle (left). This image can help you understand the scale of these creatures (compare to number 4). These animals were able to evolve to such huge sizes because there were no mammals to ‘fill’ that niche. There are also hundreds of other bird species that dominated the New Zealand forest.

You may see where I’m going with this. However, before you jump the gun, realize that the following idea hasn’t been proven and is only discussed theoretically. But the idea is this: millions of years ago, New Zealand did have many native mammals. This is because the land was at one point connected to the rest of the world, and so must have had the same animals. However, some time in the past 30 million years, a giant volcanic eruption destroyed all life on the subcontinent, save a few invertebrates and one reptile – the Tuatara (they call it the living dinosaur).

Once this extinction level event occurred, the ash settled to create a fertile volcanic soil that would lay the foundation for New Zealand’s flora. After a few hundred thousand years, New Zealand became a bountiful land with very few species to take advantage of it. Mammals couldn’t walk here, but birds could fly. So they did, bringing with them the seeds of trees, bushes and grasses from distant continents.

These new vegetative species flourished in the mineral-rich ground, and as forests sprung up birds migrated to the area, along with anything else that could fly or swim (bats, butterflies, fish, etc.). And so over the next several million years this ecosystem developed into one of the most unique on the planet – one free of predatory mammals, dangerous reptiles and venomous insects, and one full of colourful (and sometimes not so colourful) birds, land-averse mammals and beautiful, lush flora.

In short, after splitting from the rest of the world, a giant supervolcano explosion destroyed almost all life on the subcontinent. This eruption created ideal conditions for a land full of forest, which catered to the birds that could fly over here. These birds, isolated from other continents, evolved over time to become the dominant class of animal. Meanwhile, all the dangerous creatures in Australia weren’t able to cross the Tasman sea, leaving New Zealand peaceful and murder-free.