21. Swedish astronaut Christer Fuglesang was not allowed to bring reindeer jerky with him on board a shuttle mission as it was “weird” for the Americans so soon before Christmas. He had to go with moose instead. – Source

22. Chris Hadfield says every astronaut on the International Space Station has deposited urine on the right rear tire of the vehicle taking them to the rocket, as a tribute to Yuri Gagarin doing the same on his first trip into space. – Source

23. The astronauts aboard Skylab 4 went on “strike” for a day because they felt overwhelmed by the demands of Mission Control. They used the time to look out the window and think. – Source

24. There are four bags of astronaut poop on the moon left behind from Neil Armstrong on his Apollo mission to the moon. – Source

25. An astronaut threw a boomerang while in a space station and it returned to him. As long as there is air to provide the necessary forces, a boomerang will return to its thrower, even in the weightlessness of Earth’s orbit. – Source 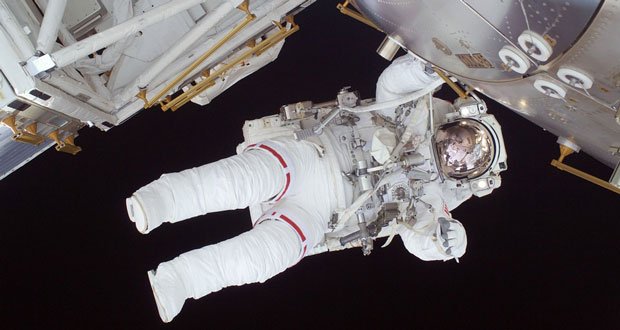 27. Astronaut John Young got really bad flatulence from drinking orange juice during the Apollo 16 mission to the moon. Unknowingly, he broadcast this fact to the world. “I have the farts again. I got them again, Charlie.” – Source

28. Some astronauts experience a profound shift in life perspective after seeing Earth from space. – Source

29. The interior of the Skylab space station was so enormous that astronauts could get “stuck” in the middle, and had to either try and “swim” or wait for air currents to blow them back to a wall. – Source

30. After seeing Stanley Kubrick’s 2001: A Space Odyssey, the astronauts of Apollo 8, the first manned mission to leave Earth’s orbit, was tempted to radio back reporting the appearance of a black monolith. – Source

31. Apollo 13 Astronaut Jim Lovell had a cameo in the movie Apollo 13. He requested to play the captain of the ship that rescues him because that was the same rank he held when he retired from the Navy. – Source

33. For months after returning from long stays in space, some astronauts will still let go of an object in mid-air fully expecting it to float. – Source

34. There is a guy who smells everything before it goes into space with the astronauts to protect them from toxic and obnoxious odors. – Source

35. While in space astronauts sometimes see random flashes of light caused by cosmic rays hitting the optic nerve. We don’t see it on earth because the magnetosphere protects us from the rays. – Source

36. Space Adaptation Syndrome involves nausea and vomiting, vertigo, headaches, lethargy, and overall malaise. 45-75% of all astronauts experience it. It has always resolved within 72 hours. – Source

37. The Malaysian space agency convened a conference of 150 Islamic scientists to determine how a Muslim astronaut on the space station should pray facing Mecca. – Source

38. Astronauts have a patch of Velcro inside their helmet so they can scratch their nose. – Source