In the Earth’s crust, bismuth is about twice as abundant as gold. It has an atomic number of 83. Elemental bismuth may occur naturally, although its sulfide and oxide form important commercial ores. 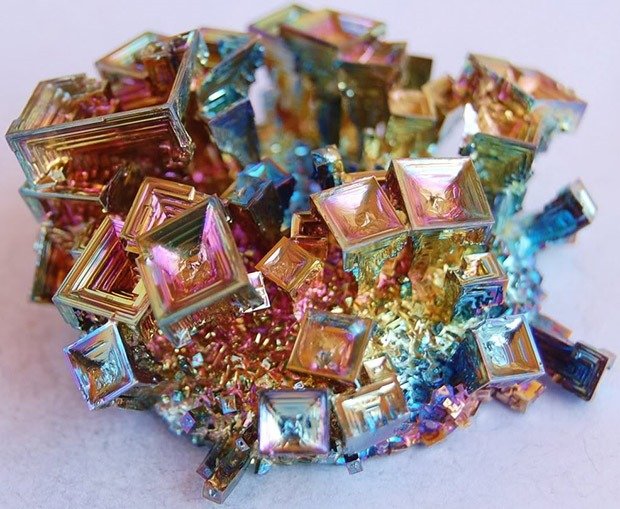 This metal is heavy, 86% as dense as lead. But as so-called heavy metals go, it’s pretty easy going and won’t wreck your organs like the others. In fact, it’s what gives Pepto-bismol it’s super powers. Bismuth is also used in cosmetics, pigments, and other pharmaceuticals. Bismuth’s unusual propensity to expand upon freezing is responsible for some of its uses. As the toxicity of lead has become more apparent in recent years, there is an increasing use of bismuth alloys (presently about a third of bismuth production) as a replacement for lead. 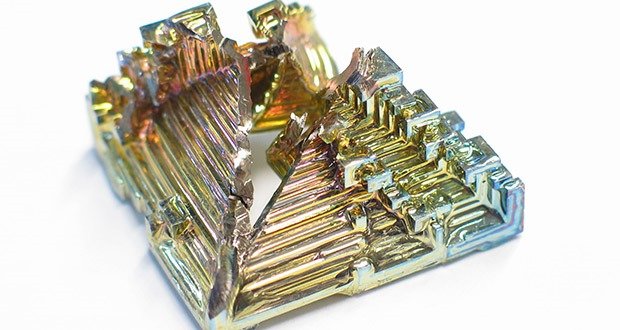 Bismuth is inherently a silvery white/pink color.  Oxidation (rust) is what gives it that magical cornucopia of colors from yellow to blue. 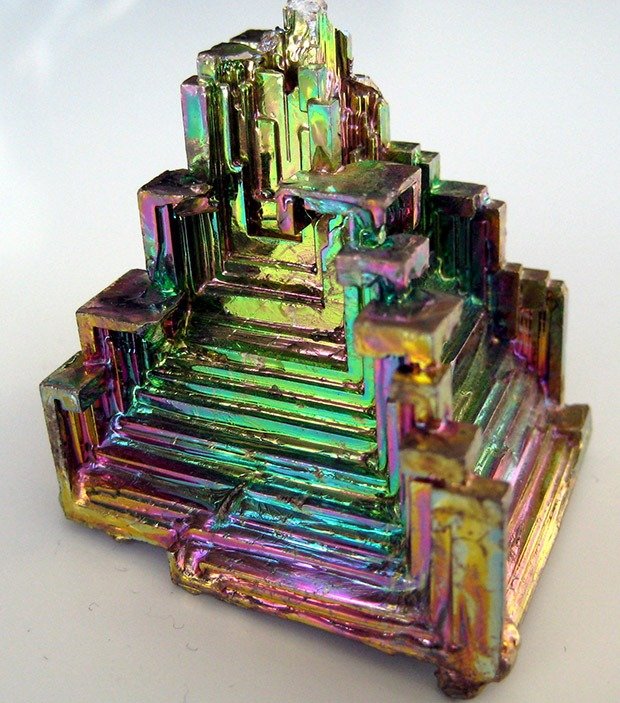 This mineral has a Triagonal, Rhombohedral crystal structure. I find all of those words intimidating, but according to wikipedia: “A lattice system is described by three basis vectors. In the rhombohedral system, the crystal is described by vectors of equal length, no two of which are orthogonal.” So there’s that. 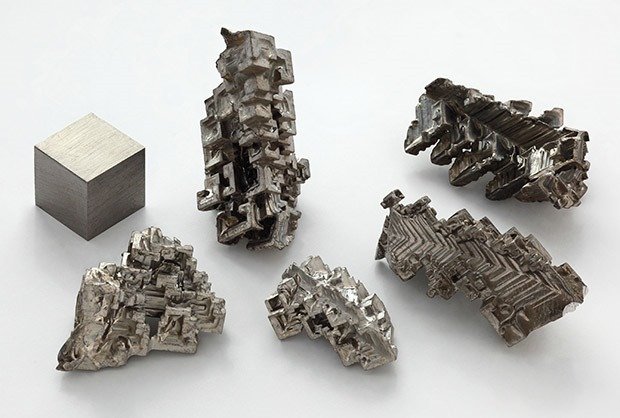 Bismuth is the strongest natural Diamagnetic material.  Diamagnetism is a property of all materials and opposes applied magnetic fields, but is very weak. This basically means it is the Arch Nemesis of magnets. 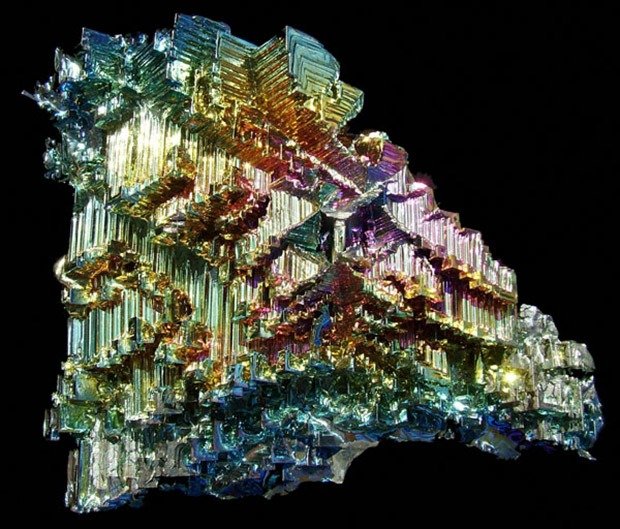 The spiral, stair-stepped structure of bismuth crystals is the result of a higher growth rate around the outside edges than on the inside edges. The variations in the thickness of the oxide layer that forms on the surface of the crystal causes different wavelengths of light to interfere upon reflection, thus displaying a rainbow of colors. 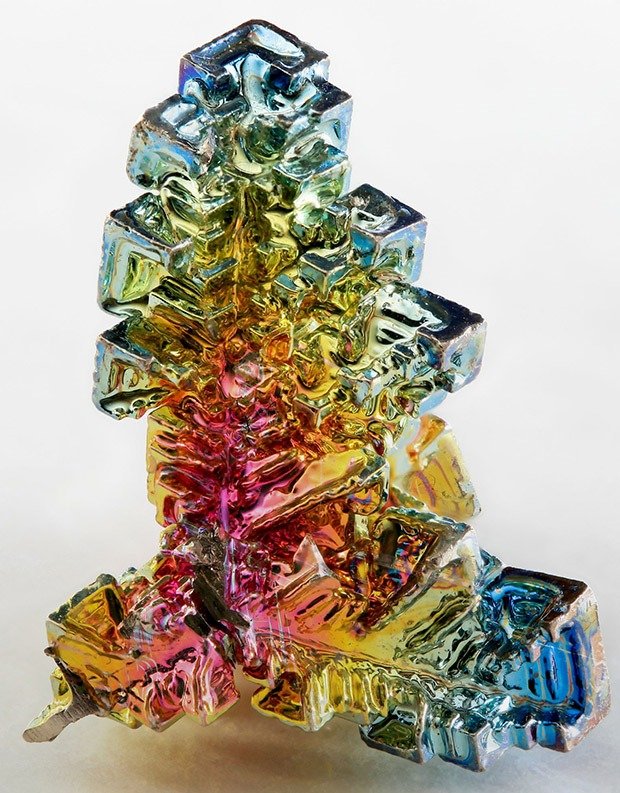 As much as it pains me to admit this, it must be acknowledged that Bismuth that looks like all these pictures, doesn’t really occur naturally. Bismuth occurs naturally in Bismuthinite (Bi2S3) and Bismite (Bi2O3). It must be melted down to be concentrated, and then re-cooled. But, you can do it from home in a regular pot, and the crystals do form naturally in that sense. 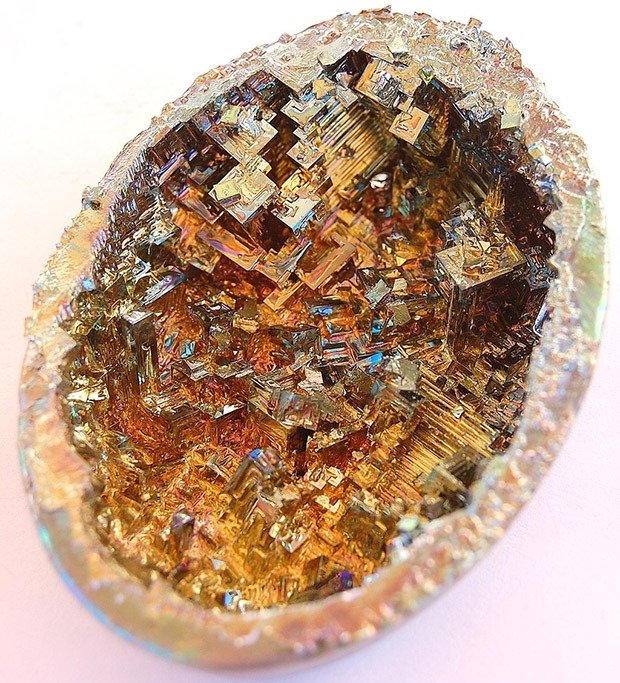 According to the United States Geological Survey, the world mining production of bismuth in 2010 was 8,900 tonnes, with the major contributions from China (6,500 tonnes), Peru (1,100 tonnes) and Mexico (850 tonnes).