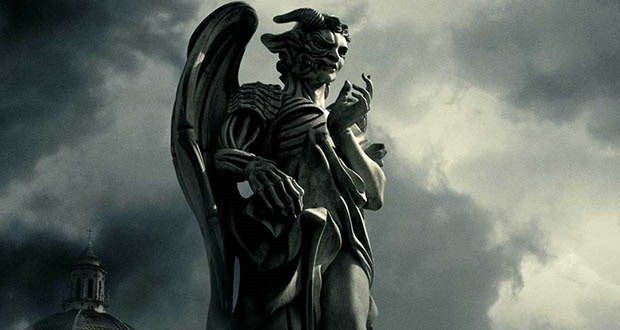 The Ancient Greek word δαίμων daimōn denotes a spirit or divine power, much like the Latin genius or numen. Daimōn most likely came from the Greek verb daiesthai (to divide, distribute). The Greek conception of a daimōns notably appears in the works of Plato, where it describes the divine inspiration of Socrates. To distinguish the classical Greek concept from its later Christian interpretation, the former is anglicized as either daemon or daimon rather than demon. 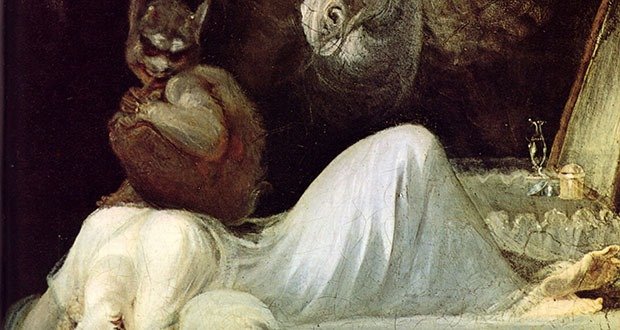 A demon, daemon or fiend, is a supernatural, often malevolent being prevalent in religion, occultism, literature, fiction, mythology and folklore around the world. In Ancient Near Eastern religions as well as in the Abrahamic traditions, including ancient and medieval Christian demonology, a demon is considered an unclean spirit, a fallen angel, or a spirit of unknown type which may cause demonic possession, calling for an exorcism.

In Western occultism and Renaissance magic, which grew out of an amalgamation of Greco-Roman magic, Jewish demonology and Christian tradition, a demon is a spiritual entity that may be conjured and controlled. 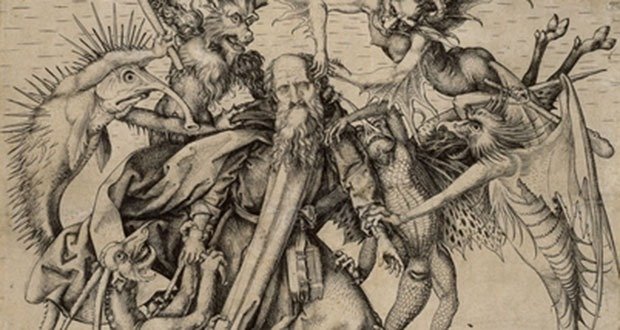 The term had first acquired its negative connotations in the Septuagint translation of the Hebrew Bible into Greek, which drew on the mythology of ancient Semitic religions. This was then inherited by the Koine text of the New Testament.

The Western medieval and neo-medieval conception of a demon derives seamlessly from the ambient popular culture of Late (Roman) Antiquity. The Hellenistic “daemon” eventually came to include many Semitic and Near Eastern gods as evaluated by Christianity.

According to the Jewish Encyclopedia, “In Chaldean mythology the seven evil deities were known as shedu, storm-demons, represented in ox-like form.” They were represented as winged bulls, derived from the colossal bulls used as protective jinn of royal palaces.

Pre-Islamic mythology did not differentiate between gods and demons. Jinn were considered divinities of inferior rank and had many human abilities, such as eating, drinking and procreating. While most jinn were considered peaceful and well-disposed towards humans, there also existed evil jinn who contrived to injure people. 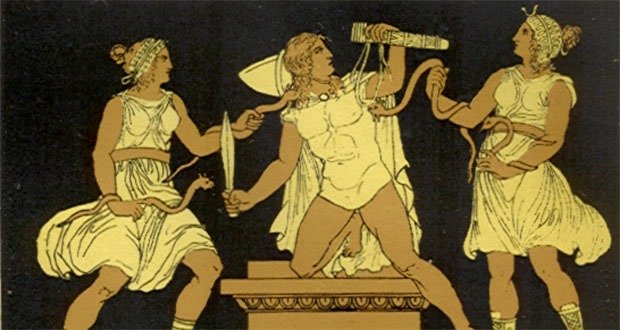 In monotheistic religions, the deities of other religions are sometimes interpreted or created as demons. The evolution of the Christian Devil and pentagram are examples of early rituals and images that showcase evil qualities, as seen by the Christian churches.

Since Early Christianity, demonology has developed from a simple acceptance of demons to a complex study that has grown from the original ideas taken from Jewish demonology and Christian scriptures. Christian demonology is studied in depth within the Roman Catholic Church, although many other Christian churches affirm and discuss the existence of demons.

Building upon the few references to daemons in the New Testament, especially the poetry of the Book of Revelation, Christian writers of apocrypha from the 2nd century onwards created a more complicated tapestry of beliefs about “demons” that was largely independent of Christian scripture. 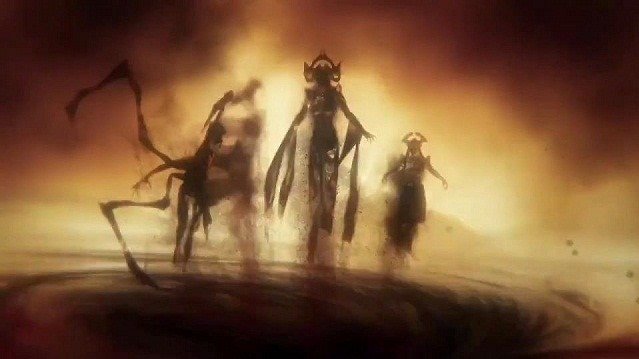 In Greek mythology the Erinyes, also known as Furies, were female chthonic deities of vengeance; they were sometimes referred to as “infernal goddesses.” A formulaic oath in the Iliad invokes them as “those who beneath the earth punish whosoever has sworn a false oath”. Burkert suggests they are “an embodiment of the act of self-cursing contained in the oath”.

They correspond to the Dirae in Roman mythology, and some suppose that they are called Furies in hell, Harpies on earth, and Dirae in heaven. According to Hesiod’s Theogony, when the Titan Cronus castrated his father Uranus and threw his genitalia into the sea, the Erinyes as well as the Meliae emerged from the drops of blood when it fell on the earth (Gaia), while Aphrodite was born from the crests of sea foam. According to variant accounts, they emerged from an even more primordial level—from Nyx, “Night”, or from a union between air and mother earth. 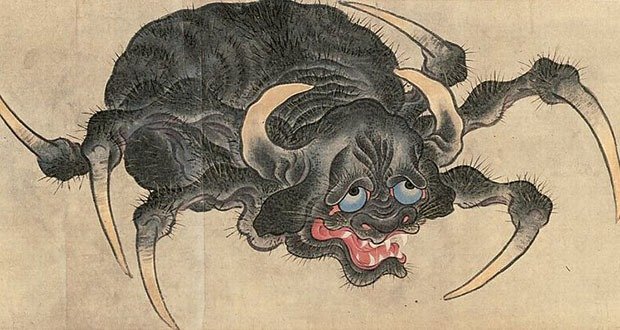 Oni (鬼) are a kind of yōkai from Japanese folklore, variously translated as demons, devils, ogres or trolls. They are popular characters in Japanese art, literature and theatre. Depictions of oni vary widely but usually portray them as hideous, gigantic ogre-like creatures with sharp claws, wild hair, and two long horns growing from their heads. They are humanoid for the most part, but occasionally, they are shown with unnatural features such as odd numbers of eyes or extra fingers and toes. Their skin may be any number of colors, but red and blue are particularly common.

They are often depicted wearing tiger-skin loincloths and carrying iron clubs called kanabō (金棒?). This image leads to the expression “oni with an iron club” (鬼に金棒 oni-ni-kanabō), that is, to be invincible or undefeatable. It can also be used in the sense of “strong beyond strong”, or having one’s natural quality enhanced or supplemented by the use of some tool. 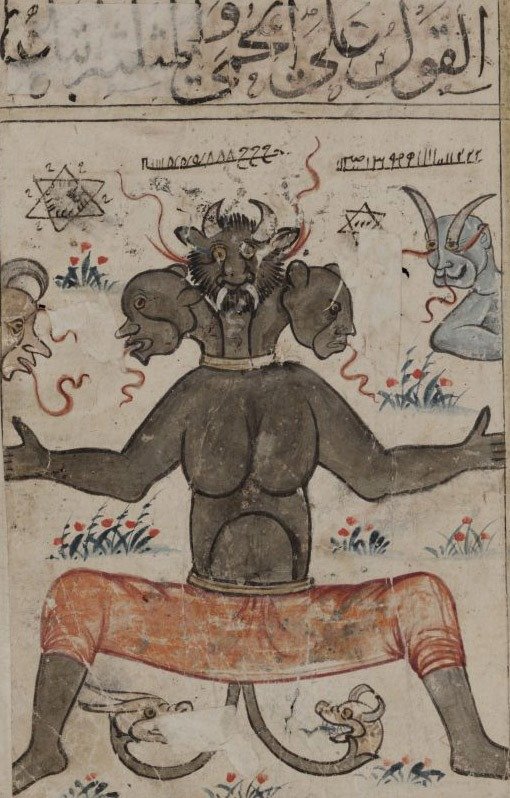 Daeva is an Avestan language term for a particular sort of supernatural entity with disagreeable characteristics. In the Gathas, the oldest texts of the Zoroastrian canon, the daevas are ‘wrong gods’ or ‘false gods’ or ‘gods that are (to be) rejected’. This meaning is – subject to interpretation – perhaps also evident in the Old Persian ‘daiva inscription’ of the 5th century BCE. In the Younger Avesta, the daevas are noxious creatures that promote chaos and disorder. In later tradition and folklore divs are personifications of every imaginable evil.

Equivalents for Avestan daeva in Iranian languages include Pashto and Balochi, all of which apply to demons, monsters, and other malignant creatures. The Iranian word was borrowed into Old Armenian as dew, Georgian as devi, in Tajik as dev, and Urdu as deo, with the same negative associations in those languages.

Jinn or djinn (singular: jinnī, djinni, or genie; Arabic: الal-jinn, singularالجني al-jinnī are supernatural creatures in Islamic mythology as well as pre-Islamic Arabian mythology. They are mentioned frequently in the Quran (the 72nd sura is titled Sūrat al-Jinn) and other Islamic texts and inhabit an unseen world in dimensions beyond the visible universe of humans. The Quran says that the jinn are made of a smokeless and “scorching fire”, but are also physical in nature, being able to interfere physically with people and objects and likewise be acted upon.

The jinn, humans and angels make up the three sapient creations of God. Like human beings, the jinn can be good, evil, or neutrally benevolent and hence have free will like humans and unlike angels. The shaytan jinn are the analogue of demons in Christian tradition, but the jinn are not angels and the Quran draws a clear distinction between the two creations. The Quran states in surat Al-Kahf (The Cave), Ayah 50, that Iblis (Azazel) is one of the jinn. 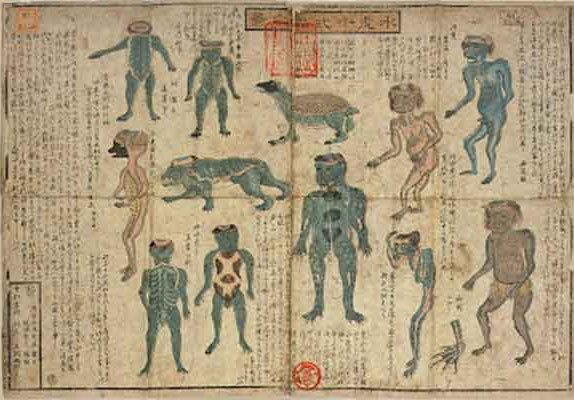 Jinn is a noun of the collective number in Persian literally meaning “hidden from sight”, and it derives from the Arabic root j-n-n (pronounced: jann/ junn جَنّ / جُنّ) meaning “to hide” or “be hidden”. Other words derived from this root are majnūn ‘mad.’

According to the Quran, jinn have free will, and Iblis abused this freedom in front of Allah by refusing to bow to Adam when Allah ordered angels and jinn to do so. For disobeying Allah, Iblis was expelled from Paradise and called “Shaytan” (Satan). Jinn are frequently mentioned in the Quran: Surah 72 is named after the jinn, and has a passage about them. Another surah mentions jinn in the last verse. The Quran also mentions that Muhammad was sent as a prophet to both “humanity and the jinn”, and that prophets and messengers were sent to both communities.

They are usually invisible to humans, but humans do appear clearly to jinn, as they can possess them. Jinn have the power to travel large distances at extreme speeds and are thought to live in remote areas, mountains, seas, trees, and the air, in their own communities. Like humans, jinn will also be judged on the Day of Judgment and will be sent to Paradise or Hell according to their deeds. 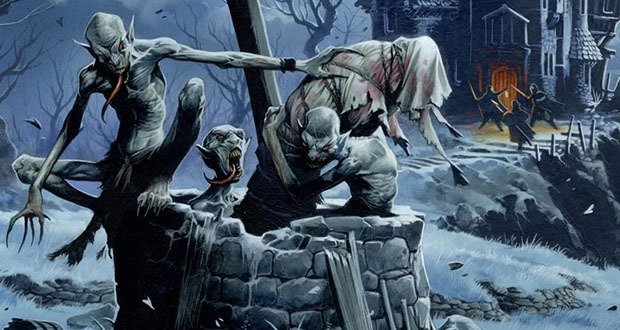 A ghoul is a folkloric monster or evil spirit associated with graveyards and consuming human flesh, often classified as undead. The oldest surviving literature that mention ghouls is likely One Thousand and One Nights. The term was first used in English literature in 1786, in William Beckford’s Orientalist novel Vathek, which describes the ghul of Arabian folklore. Ghoul is from the Arabic al-ghūl, from ghala “to seize”. The term is etymologically related to Gallu, a Mesopotamian demon In ancient Arabian folklore, the ghul (Arabic: literally demon) dwells in burial grounds and other uninhabited places. The ghul is a fiendish type of jinn believed to be sired by Iblis.

A ghoul is also a desert-dwelling, shapeshifting, demon that can assume the guise of an animal, especially a hyena. It lures unwary people into the desert wastes or abandoned places to slay and devour them. The creature also preys on young children, drinks blood, steals coins, and eats the dead, then taking the form of the person most recently eaten.

In the Arabic language, the female form is given as ghoulah and the plural is ghilan . In colloquial Arabic, the term is sometimes used to describe a greedy or gluttonous individual.