Here is part 9 of the Game of Thrones Series about The Blackfyre Rebellion.

King Aegon IV Targaryen (Aegon the Unworthy) was the eleventh Targaryen King (making him Aerys II’s great-great-grandfather). Fathering numerous bastards, he legitimized them on his deathbed leading to a great schism in Westeros. Among his bastards, four were from noble mothers, and have come to be called “The Great Bastards”: Brynden Rivers, Shiera Seastar, Aegor Rivers, and Daemon Blackfyre. 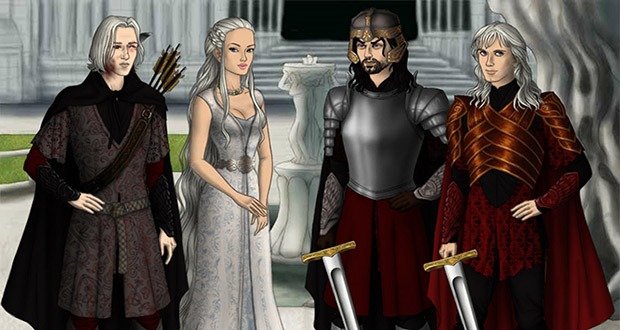 Lord Brynden Rivers, called “Bloodraven”, was a legitimized Great Bastard of Aegon IV and Mylessa Blackwood, his sixth mistress. His personal arms were a white dragon with red eyes breathing red flame on a black field. Shiera Seastar, another bastard of Aegon IV, was his mistress. His half-brother Bittersteel desired Shiera also, which served in increasing the animosity between the two. He was also thought to be a sorcerer.

Shiera Seastar was the last of the Great Bastards of Aegon IV. Shiera was renowned as a famous for her beauty and as a seductress, with long Targaryen silver-gold hair, and a heart-shaped face. Although she had two mismatched eyes, (one blue, the other green), it was said that the “defect” only enhanced her beauty. She was a great reader and at an early age spoke many languages and maintained a large and arcane library. She was also reputed to share her mother’s skill in the dark arts.

Ser Aegor Rivers, often called “Bittersteel”, was a renowned warrior and one of the Great Bastards fathered by Aegon IV. His mother was Barba of House Bracken. In his personal arms, he combined the coat-of-arms of his parents: a red stallion for House Bracken with black dragon wings for House Blackfyre, on a golden field.

Daemon Blackfyre was the bastard son of Daena Targaryen and Aegon IV. As a bastard, Daemon bore the arms of House Targaryen with the colours reversed: a black three-headed dragon on a red field. Thus he became known as “the Black Dragon.” 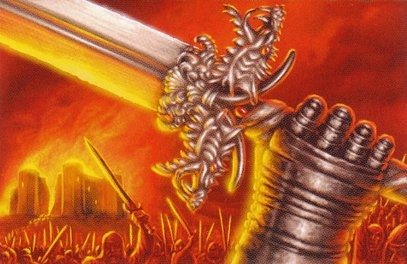 Aegon IV gave the Targaryen sword of kings, Blackfyre, to his bastard, Daemon, instead of his true-born son, Daeron. Since it was viewed that the sword represented the monarchy, this act was quite inflammatory. As previously mentioned, Aegon IV legitimized his bastards on his deathbed, placing them in succession to Daeron. Daeron ascended the Iron Throne as Daeron II upon Aegon’s death. Daeron II was seen as cultured and scholarly, but not strong enough to rule well.

In the intervening time, Daemon heard rumors that Daeron was actually himself bastard of Aemon the Dragonknight. People soon attached themselves to Daemon due to his strength, charm, martial skill, and his possession of Blackfyre. He was called “The King Who Bore the Sword”. He took the name Blackfyre as his house name and for his sigil, he inverted the Targaryen colors to display a black three-headed dragon on red. The final straw came when Daeron II betrothed his (and Daemon’s) sister, Daenerys, to the Prince of Dorne. Daemon and Daenerys were said to love each other deeply. 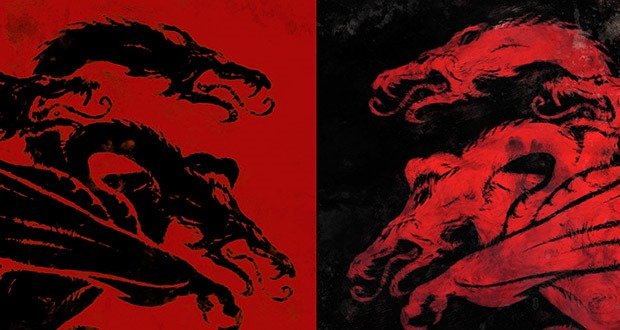 Eleven years after Daeron II ascended the Iron Throne, Daemon declared himself the true heir of Aegon IV and started his rebellion by gathering an army. The Great Bastards split, with Bittersteel joining Daemon and Bloodraven staying loyal to Daeron, becoming the Master of Whisperers. Bittersteel and Bloodraven deeply hated each other due to them both desiring their sister, Shiera Seastar. Bloodraven advocated a hard line against the rebels and Daeron II ended up favoring Bloodraven’s approach.

The realm split between “The Red Dragon” (Daeron II) and “The Black Dragon” (Daemon Blackfyre). The fighting, which lasted about a year, greatly damaged the Riverlands, as most wars have over the centuries. There was also fighting in the Westerlands. The final battle of the rebellion was on a large field southwest of King’s Landing.

Chapter 3: Battle of the Redgrass Field 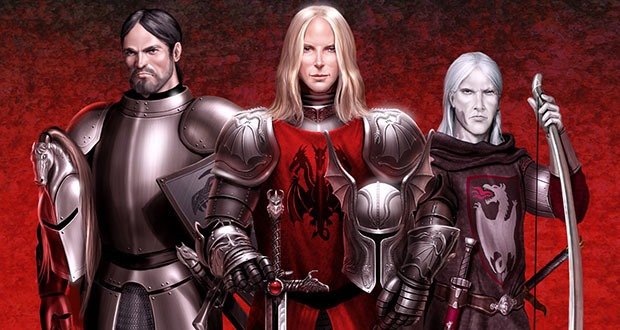 The two massive armies met and began fighting. Daemon slew several men, including cutting down Ser Gwyane Corbray of the Kingsguard, before retreating back to the maesters. Bloodraven used the pause to his advantage and sent his personal company of archers, dubbed “The Raven’s Teeth”, to a small ridge and began raining arrows on Daemon’s position, killing one of Daemon’s twin sons, Aegon. Daemon himself was killed with seven arrow strikes. Daemon’s other twin son, Aemon, picked up Blackfyre and was immediately killed with a hail of arrows.

With Daemon’s death, the rebel forces began to fall apart. Bittersteel was able to turn the rebels around and charge the Raven’s Teeth. He met Bloodraven on the field, ultimately taking Bloodraven’s left eye. Loyalist reinforcements began to arrive under Prince Baelor Breakspear with stormlords and Dornishmen, ending the battle and the rebellion and confirming Daeron II’s reign. With over 10,000 men killed, the grass had been turned red, giving the field its name. Bittersteel was able to flee to the Free Cities with five of Daemon’s sons. 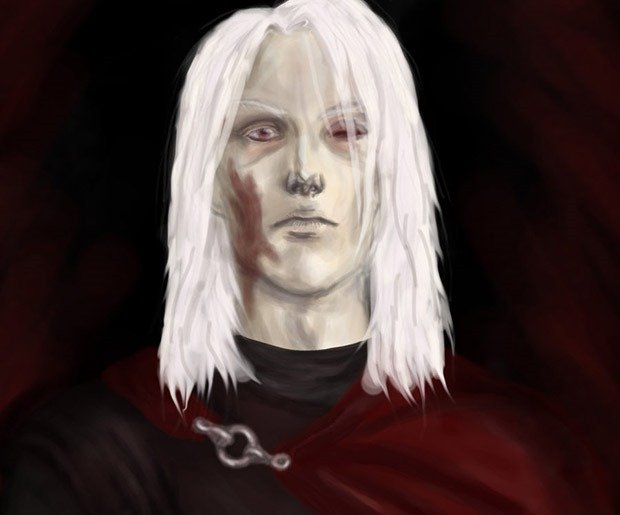 Over the course of the next decades, various claimants to Daemon’s legacy would launch a rebellion in the name of House Blackfyre. After the Redgrass Field, Bittersteel immediately began plotting a return to Westeros from the Free Cities and founded the Golden Company specifically for that purpose. Seventeen years after the Redgrass Field, Blackfyre supporters gathered under the pretense of a tourney. Their aim was to launch a second rebellion under Daemon II Blackfyre, ostensibly one of Daemon’s sons. Bloodraven’s network of spies and sorcerers ultimately exposed the plot, which was put down by Bloodraven himself who was now Hand of the King. These events are part of The Dunk & Egg novella, “The Mystery Knight”.

Bloodraven was adamant about preventing another rebellion and ensured his “whisperers” knew everything possible. The joke told at the time was, “How many eyes does Bloodraven have? A thousand eyes and one”. Bloodraven eventually was exiled to the Wall and became the Lord Commander of the Night’s Watch. 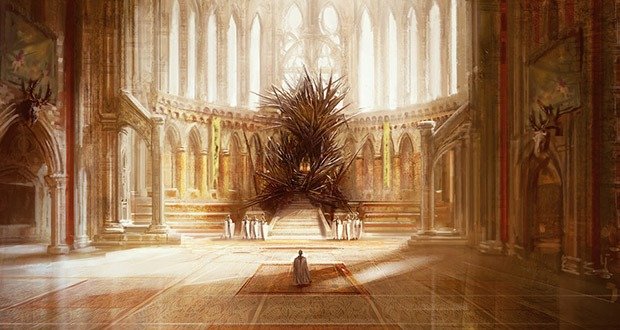 Sixty years after the Redgrass field (about 20 years before Robert’s Rebellion), another Blackfyre pretender in Essos, Maelys the Monstrous, gathered an army. They conquered the Disputed Lands and Tyrosh, and landed in the Stepstones to secure a base of operations from which to attack Westeros. The Iron Throne under Jaehaerys II (the Mad King’s father) called upon his regional wardens to send a large force to repel the invasion. This would be the last time before the War of the Five Kings in the books that the wardens of each region were called to fight. A 23-year-old knight from the Stormlands, Ser Barristan Selmy, slew Maelys the Monstrous in single combat, which earned Ser Barristan an appointment to the Kingsguard.