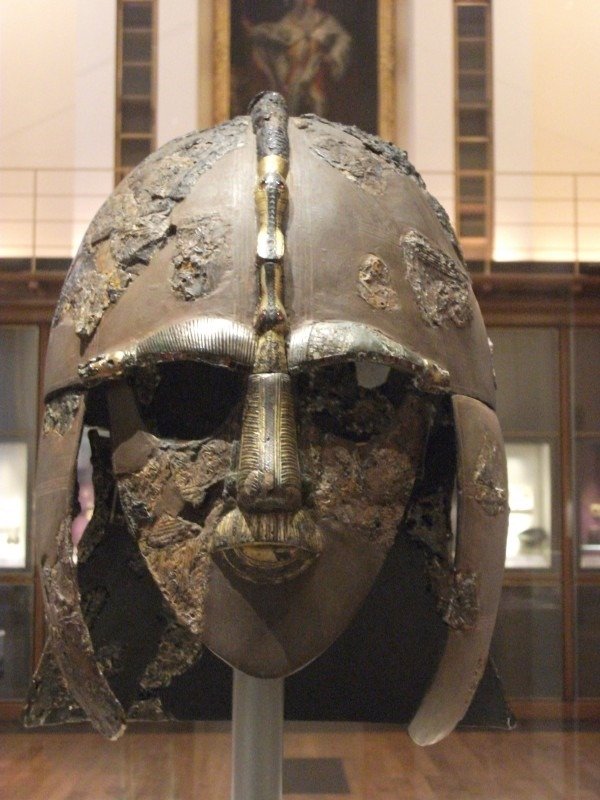 Old English came to the British Isles between 400-500 CE from the area now known as the Netherlands. Now, linguists like to think of languages sort of like how biologists think of species, with kingdoms and phyla and what not. Specifically, English is a member of the Germanic branch of Indo-European, meaning it’s more closely related to German, Dutch, and the Scandinavian languages than other Indo-European languages like the Romance languages, the Slavic languages, or Indo-Aryan languages like Persian and Hindi. Note that English is NOT a Romance language.

It is a member of the Anglic branch of Germanic, along with Scots and a few other languages which are now extinct but were spoken in modern Ireland.

It’s closest living relative besides Scots is Frisian, a language spoken in Friesland within the modern borders of the Netherlands. The Anglic languages, along with Frisian, are (not very creatively) known as the Anglo-Frisian languages. Compared to other Germanic languages, the Anglo-Frisian languages show some innovations not found elsewhere in Germanic. Notably, these language change the “k” sound before certain vowels to the “ch” sound, while other Germanic languages preserve the “k” sound.

Old English is NOT What Shakespeare Spoke 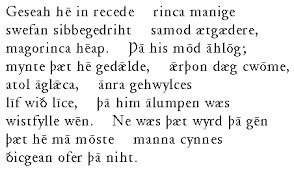 This is a passage of Beowulf, which is actually Old English. Note that you can’t read it, because the English language has changed a lot since Beowulf was first written between the 8th and 11th centuries CE.

BUT if you know some German or Dutch, you might be able to understand some of it. That’s because at this stage of the language, it was much more “Germanic-y” than it is now (we’ll get to what this means later).

How did Old English Get to Britain? 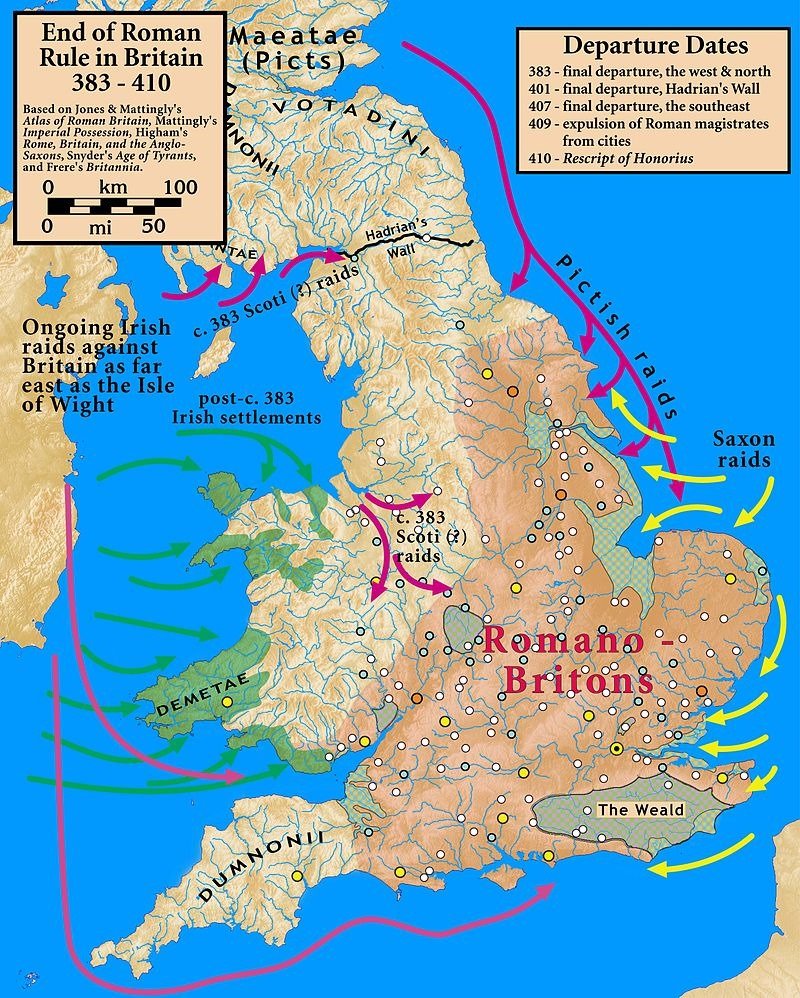 We know that Germanic groups called the Angles and the Saxons (England and the English language get their name from the Angles) were the ones who brought a Germanic language to Britain, but exactly how this happened is something of a debate among historians and archaeologists. It happened in one of two ways, broadly speaking:

The important thing about this debate is that there were already lots of people in Britain before they came, notably the Romans (who probably brought some form of Latin) and the indigenous Celts. Celtic languages in modern day England are largely restricted to the outer geographical reaches (by which I mean Wales and Cornwall – no disrespect at all to the Welsh), there is good evidence from place names that it was once more widely spoken across England. The word “Britain” itself actually is from a Celtic language!

But one way or another, Old English spread and the Celtic languages receded and eventually developed in the modern languages of Welsh, Cornish, and Breton (how Breton got to France is a whole other story).

Surprisingly, the Celtic languages left very little impact on English. Normally, when two languages come into contact, they leave bits of each other behind, either in certain sounds or grammatical constructions. What DID have a big influence on Old English was…. 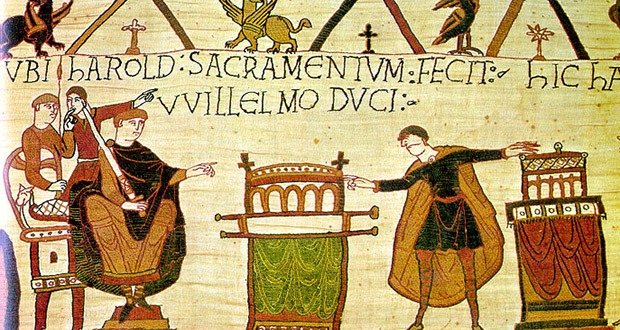 The Normans were a people who spoke a language known as Norman French, a Romance language descending from Latin and closely related to modern standard French.

The Normans invaded Old-English speaking Britain between 1066 and 1072. They brought with them Norman French, which had a massive impact on the language. To this day, some 50% percent of all English words are French in origin. But as with the Celtic languages, the grammatical core and the most common words of English remain firmly Germanic.

The words in that paragraph which are from French are: “Norman (obviously), invade, French (although the French themselves borrowed this word from the Germanic speaking Franks), massive, language, percent, origin, grammatical, core, common, remain” and “firmly.”

Although this influence was great and I could do a whole post on it, the important thing to remember is that English is NOT a Romance language. It is a firmly Germanic language with a lot of Romance fluff around it. 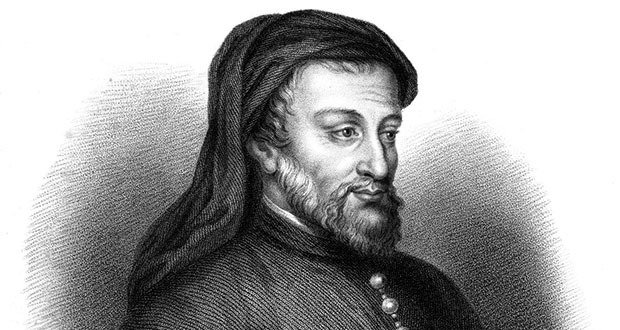 Very little was written in English under Norman rule as the Normans wrote everything in French or Latin, but when the Normans left in 1154 English reemerged. But it reemerged new and different. This stage of the language is called “Middle English.” It was spoken by this sexy dude, Chaucer.

Middle English is characterized by an erosion of a lot of the Germanic grammar and word order. It is unclear what the source of these changes was. They probably represent a natural development, as similar developments happened in Dutch, but it’s also possible that these changes represent the language “simplifying” under French influence. This idea is basically that the Normans had trouble speaking Old English, so they simplified it. 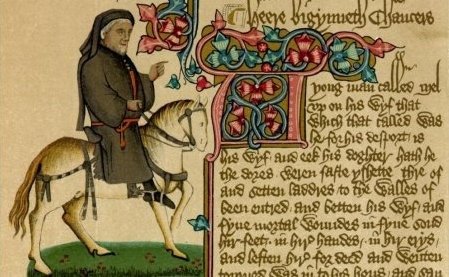 Chaucer spoke and wrote in a dialect of Middle English. Note that Middle English is MUCH easier for Modern English speakers to read, but we know that it was definitely pronounced much differently, and you most certainly could not hold a conversation with Chaucer (basically, all those silent letters English learners hate were all pronounced. Yes, even those silent “e”-s at the ends of words and the “k” in “knight” and the “gh” in “night”). Here’s a passage of Chaucer and the translation below:

Chaucer (from the Canterbury Tales – The Merchant’s Prologue):

“Wepyng and waylyng, care and oother sorwe
I knowe ynogh, on even and a-morwe,’
Quod the Marchant, ‘and so doon oother mo
That wedded been.”

“Weeping and wailing, care and other sorrow
I know enough, in the evening and in the morning,’
said the Merchant, ‘and so does many another
who has been married.” 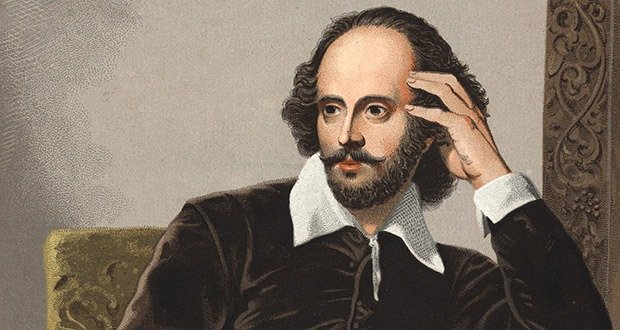 The Middle English period ended in the late 15th century and slipped into Modern English, which is what I’m writing and what you’re reading.

This handsome gent is Shakespeare. He spoke and wrote in Modern English – NOT Old English, as you’ve hopefully now learned.

This transition happened through a series of sound changes from Middle English. I won’t get into the nitty-gritty of these sound changes, but basically they’re what happened to make us pronounce the words the way we do, not the way they’re written, as English orthography (the fancy Greek way of saying “writing system”) was largely solidified during this transitory period. 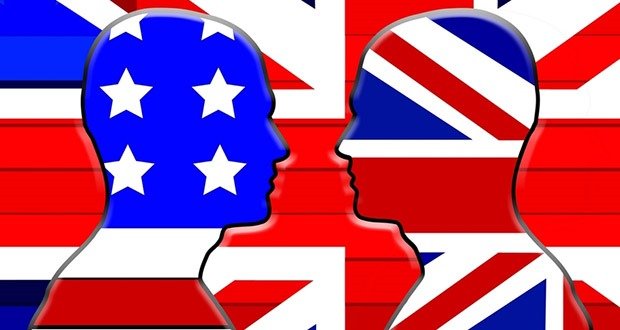 Sometimes I’ve read on the internet things like “American English is a corruption of British English.” This is simply not the case.

The first thing to note is that American English and British English are not single, monolithic entities. They’re living things, and are spoken differently by different communities.

Second, it’s better to think of American English and British English as sister languages/dialects that developed from a common source, sort of like species of dog – they look different, but they’re fundamentally similar, and this similarity can be traced back to a common ancestor.

In fact, many dialects of American English retain some conservative features which many dialects of British English have lost, like pronouncing “r” everywhere – you posh Brits write it for a reason!

We will publish another article “American Versus British English: Dialects vs. Languages” detailing the differences between the two soon.