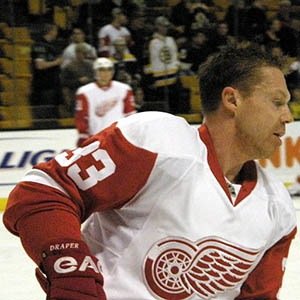 1. Kris Draper was traded for just 1$ in 1993 to Detroit Red Wings. Thus, he began his reputation as the “One Dollar Man” and went on to win four Stanley Cups for Detroit. – Source

2. In 1930 World Ice Hockey Championship, the Canadian team was considered so dominant that it did not participate in the knock-out tournament. Canada was right away put into the final game and the tournament was played to determine an opponent. Canada won. – Source

4. Clint Malarchuk, while playing for Buffalo Sabres in 1989 had his throat slit open (jugular vein) during a game. The only reason he was able to survive was because of his trainer, who a former Army medic. His trainer reached into his neck and pinched off the bleeding until the doctors arrived. – Source

5. In 1930, a goalie named Abie Goldberry caught fire during a game when a puck hit a pack of matches he was carrying in his pocket. He was badly burned before his teammates put out the fire.- Source 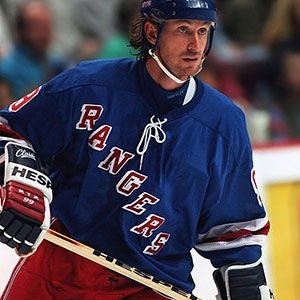 6. Even if Wayne Gretzky had never scored a single goal, he would still have more points than any other past or present hockey player. He had more career assists than any other player has total points. – Source

7. At the age of 6, Wayne Gretzky played in 10-year olds league. The sweaters given to him were far too large for him and he managed this by tucking the sweater into his pants on the right side. He continued doing this throughout his NHL career. – Source

8. The decision to install higher plexiglass panels in all hockey arenas was taken after a player-spectator brawl in 1979. After a 4-3 victory over the New York Rangers, Mike Milbury of the Boston Bruins jumped over the glass, tore off a boisterous spectator’s shoe and proceeded to beat him with it. His actions resulted in a six-game suspension. – Source

9. The Slovakian women’s hockey team qualified for the 2010 Olympics by beating Bulgaria 82-0. They later lost to team Canada in Vancouver 18-0. – Source

10. An average professional hockey player during an average game can lose as much as 5 to 8 pounds (mostly water). – Source 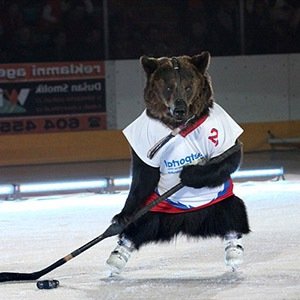 11. In USSR, bears were trained and forced to play ice hockey as part of circus performance. Here is the video.

12. During the 1987 Junior Hockey Championship, a brawl broke between Canada and the USSR. It lasted so long the officials had to turn off the lights in an attempt to quell the fight, but they were unsuccessful. – Source

13. In 1974, Buffalo Sabres’ manager purposefully drafted a hockey player, who didn’t exist to mock the slow drafting process. No one realized it until training camp started – Source

14. In Space Jam, after Daffy suggests naming the team “the Ducks”, Bugs asks “Please! What kind of Mickey Mouse organization would name their team The Ducks?” This actually did happen. In 1993, Anaheim Ducks were established by The Walt Disney Company. – Source

15. Two of the greatest hockey players of all time, Mario Lemieux and Patrick Roy were born on the same day only 200 km (124 miles) apart. – Source 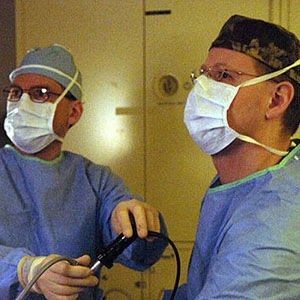 16. Doctors in British Columbia are banned from talking about hockey during surgery. – Source

17. Due to their maturational advantage in development, ice hockey players born in the first quarter of the year enjoy a more easy passage into the NHL. They go more than 40 slots earlier in the draft compared to those born in the third and fourth quarters of the year. – Source

18. There is a team of hockey-playing Roman Catholic priests called the Flying Fathers. They only play exhibition games to raise money for charities. – Source

19. At the 2002 Salt Lake City Olympics, NHL pro Jarome Iginla struck up a conversation with four fans sitting next to his table and found out that they were sleeping in their car. He excused himself from the conversation and booked them at his own expense at the hotel his family was staying in. – Source

20. If both NHL goalies are injured, the team can literally choose any available goalie to suit up and play and this includes fans. – Source 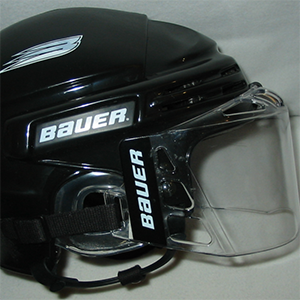 21. Only in 1997 was a rule passed (grandfather clause) that all hockey players in the NHL were required to wear helmets. The 1979 NHL draft were the first group of players, who had to wear a protective helmet. The last player in the league to play under the “helmetless grandfather clause” was Craig MacTavish in 1997. – Source

22. Tiger Williams holds the record for most career penalty minutes in the NHL. He has spent approximately 2.7 days (3966 minutes) of his professional life in the penalty box. – Source

23. The Buffalo Sabres hold the title of being the only team to have killed an animal (a bat) during an NHL game in 1974. – Source

24. Former NHL player, Duncan MacPherson went missing while on a trip to Germany. His body was found after 14 years frozen in a shallow crevasse at the Stubai Glacier ski resort. It is believed that after a fatal accident, his supervisor concealed his body there to avoid bad publicity. – Source (Warning graphic images)

25. Mark Messier has taken the Stanley Cup to a strip joint twice. – Source 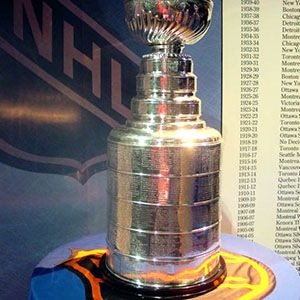 26. NHL does not own the Stanley Cup and any hockey team could potentially challenge for the trophy in the event of a season-long lockout. – Source

27. There are two dozen engraving errors on the Stanley Cup including misspelling Boston as “Bqstqn”, the Toronto Maple Leafs as “Maple Leaes,” and the New York Islanders as “Ilanders.” Only one of the errors is not a spelling error. When the Oilers won the cup in 83-84, owner Peter Pocklington had his dad’s name snuck onto the team roster. The NHL caught the error later and had Basil Pocklington’s name crossed out with X’s. – Source

28. The 1919 Stanley Cup Finals was the only game where no winner was declared due to an influenza outbreak, which hospitalized most of players from Montreal Canadiens and their general manager. – Source

29. After the Toronto Maple Leafs won the Stanley Cup in 1962, they accidently threw the Cup into a celebratory bonfire and had to pay a hefty amount to repair the ensuing damages. – Source

30. In 1905, players from Ottawa Silver Seven, while drunk, kicked the Stanley Cup into the frozen Rideau Canal and had to retrieve it the next morning. (same source as above).