If we somehow traveled through a wormhole that lead us to someplace 65 million light years away, and then we looked back at earth (with an extremely powerful telescope) could we see the dinosaurs roaming the earth? 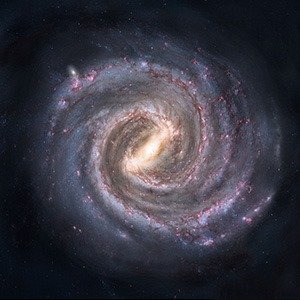 But let’s not let reality get in the way of our adventure; after all, we’ve already assumed wormholes exist. So how big does this telescope need to be? Astronomy is hard, and gets harder the further away you look, because you need bigger and bigger telescopes to get the same resolution- so we can use the lens resolution equation to find an approximate size for the lens.

So pick a wavelength in the visible spectrum- how about 500 nanometers since that’s right at the transition between blue and green, and a distance of 65 million light years. The angular resolution to resolve the earth would be:

Solving for the lens diameter gives about 5.8×1010 meters, which is about a third of the distance to the sun. This is big- this lens would fill up about half of Mercury’s orbit. 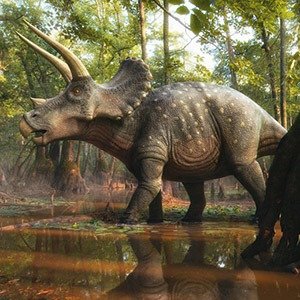 But you wanted to see dinosaurs, not just the earth. If you want to resolve a dinosaur as one pixel or so, then we use the same equation again, but put in the size of a dinosaur (maybe 10 meters?) instead of the earth radius. This lens needs to be 4.4 light years in diameter- where once again I am surprised at the neat tidbits Wolfram has built in, like the length of an adult triceratops.

Anyway, you’re going to run into a problem here because when you start putting a lot of mass in one spot space starts to curve a lot, and eventually it’s going to collapse into a black hole. For something with the density of glass, which is about 2.5 grams/cc, you’re going to hit this point fairly quickly. In fact, a ball of glass 14 light minutes in radius will have enough concentrated mass to collapse into a black hole. 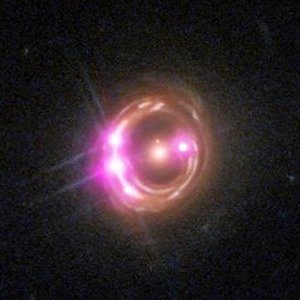 Of course you can actually get around the lens size problem, by having multiple lenses, or moving one around. How about making a cosmic lens made from electromagnetic distortion fields rather than solid materials – the same way we use existing stars /galaxies as gravity lenses already. By using a number of them you can see the same thing by very different routes. If the route takes a lot longer, you see it at a different time.

Wait why does the light change path at different times? And how come they have to wait for distinct images to appear?

Imagine you send two cars from New York to Cleveland. One takes a direct freeway, and the other a different one through Washington DC. While they both eventually arrive in Cleveland, the latter might take a bit longer to get there. This is analogous to the light. While one set of photons has a pretty direct route, another might head a ways off (like the other side of a galaxy) and then get lensed back towards the right direction. Because light travels at a constant speed, this means it takes longer to travel that distance to the viewer.

But, gravitational lensing is not like focusing with a lens though. It can increase the apparent brightness of distant objects under the right circumstances, but it doesn’t focus all the light from the object to a point like a conventional lens. We could use a combination of optical glass and gravitational “focal reducers.” 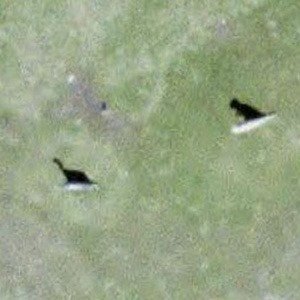 Okay, if we do indeed manage to make a lens 4.4 light years in diameter and it somehow doesn’t collapse into a black hole, how clear will the image be?

Okay, now imagine light as being tiny, bouncy balls which hit and bounce off of things. Then imagine that the balls that bounce into your eye allow you to see the thing they’ve bounced off of.

When you set up a telescope, some of the balls go into the telescope and eventually into your eye. You can see it as those balls are gathered by the lens and focused onto one point – your eye. The fewer balls that go into your eye, the fainter the image will be. Maybe you only get a couple of balls from that triceratops. That’s going to make it really hard to see. So how much balls are going to reach our eyes?

Interestingly, the number of photons doesn’t seem to be a huge limit here (unless I’ve got my numbers wrong).

Suppose we’ve got our 4.4 light year lens (gravitational lens?) set up to collect light from our distant dinosaurs. The sun puts out about 1 kW/m2 at the Earth’s position. The dinosaur reflects some of that — let’s say it’s got a 30% albedo (frustratingly, the internet doesn’t seem to know what the albedo of a lizard is). A largish dinosaur might present a surface to the observer of 300 m2 or so, so that’s 100 kW of light energy being emitted. 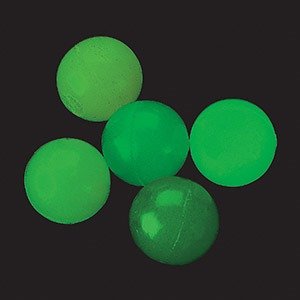 At a distance of 65 million light years, that’s 4.21×10-44 W/m2 of radiation. Now, that sounds miniscule, but over the surface area of a 4.4 light year lens, it amounts to 5.2×10-11 W at the detector. If it were all green light (I mean, it’s a dinosaur, right?), that’s more than 100 million green photons from the dinosaur hitting our detector every second.

Wow, those are big numbers. Okay let’s settle down a bit. How tough would it be to see yesterday? 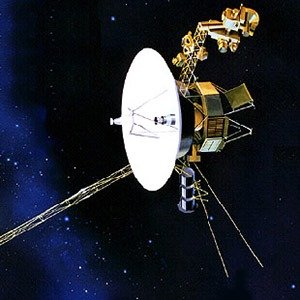 The Voyager 1 is about 17 light hours away, so if it were to snap a detailed photo of Earth somehow, it would be capturing light from 17 hours ago.

However, it would take at least 17 hours to send a command to the spacecraft to take the photo since the transmission speed cannot exceed the speed of light (meaning that by the time the Voyager 1 receives the request to “take a picture of yesterday”, the light bouncing off of Earth now would have also traveled at least greater than or equal to the transmitted command, so it would actually be taking a picture of now or after.)

Keep in mind that this spacecraft was launched in 1977 (38 years ago), took advantage of planetary gravity assist, reached a max speed of 38,610mph(62,136kmh), and it is just now 17 light hours away. Even at those ridiculous speeds, it was still only traveling at an average speed of:

To see something the size of a triceratops yesterday, you’d need a lens 1.8×106 meters in diameter. That’s about half the diameter of the moon.