So if an astronaut farted hard enough in space, would he/she move around? 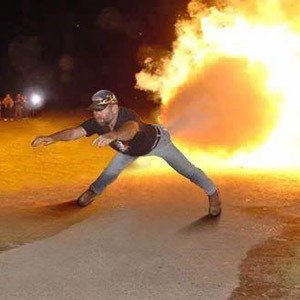 Short answer: Yes. Flatulence would propel an astronaut forward, but very slowly. But if you used the gas as fuel for a combustion reaction, the astronaut could get going much faster.

Longer answer: Gas diffusing will carry a small amount of momentum backwards, so it must exert a force on the person, pushing them forward. Essentially, farts are rocket fuel. So let’s figure out how much and how fast a person farts, to figure out how fast an astronaut can get moving in space.

Anyway, this paper abstract gives us a good idea of the average volume of gas produced by a person in a day. They give it somewhere between 476 to 1491 mL, and this other paper gives the composition as a mixture of methane, nitrogen gas, hydrogen gas, and carbon dioxide. Let’s say the average person produces 1 L of gas each day and we’ll guess that this gas mixture is about 0.5 grams/Liter, which is not entirely unreasonable given the known masses of the gasses in the mixture. That comes out to 0.5 g of flatulence every day for a normal person.

Now, let’s guess that a fart leaves the butthole at about 1 m/s – again, not entirely unreasonable. So putting all this together, we can find that a day’s worth of farts carries backwards momentum equal to

so for momentum to be conserved, the astronaut will now be traveling 7.7×10-6 m/s forward, which is only about 1000x faster than hair grows. If an astronaut in space farted every day, it would take 10,000 years for him to get up to a normal highway speed. 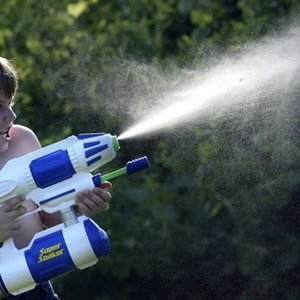 This is incredibly inefficient, but luckily, there’s a better way. The gasses I listed above are combustible – specifically methane. Just spewing the gas backwards to get a push forward would be like putting your SUV in neutral and trying to propel it forward with a supersoaker that sprays gasoline backwards. Instead of throwing it backwards, you can explode it backwards to generate thrust, like a real rocket. After all, every 14 year old knows you can light a fart on fire, but if the astronaut did this the gas behind him would expand in all directions, not giving him much of a push. Instead, we need to harness this energy for a jetpack, so that all the exhaust goes backward. 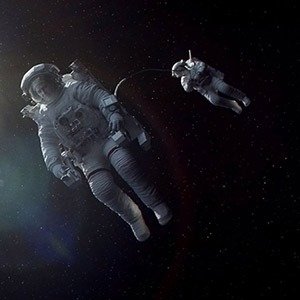 If we take the methane to be about 1% of our flatulence, and the energy of combustion to be 890 kJ/mole, then we find that the chemical potential energy of the gas is about 100 million times greater than the kinetic energy backwards. . If we had one of those fancy gas backpacks that they put on cows to harvest the methane from their farts and a jetpack to burn it, then this gas would be enough to get a particularly flatulent astronaut up to highway speed in a day.

If we were far enough from earth, could we see the dinosaurs alive?