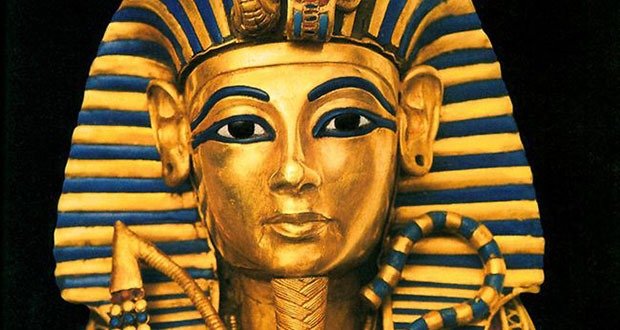 A mummy is a deceased human or animal whose skin and organs have been preserved by either intentional or accidental exposure to chemicals, extreme cold, very low humidity, or lack of air, so that the recovered body does not decay further if kept in cool and dry conditions. Some authorities restrict the use of the term to bodies deliberately embalmed with chemicals, but the use of the word to cover accidentally desiccated bodies goes back to at least 1615 AD. Mummies of humans and other animals have been found on every continent, both as a result of natural preservation through unusual conditions, and as cultural artifacts. Over one million animal mummies have been found in Egypt, many of which are cats. 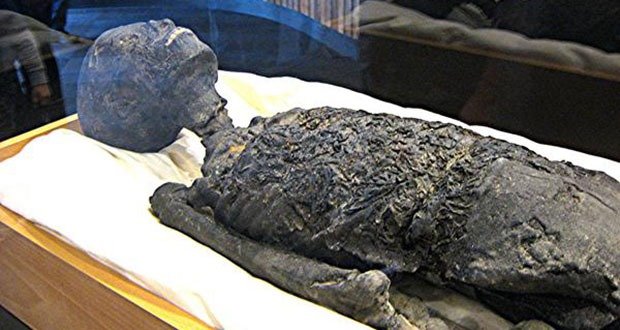 Arguably the most famous mummy ever discovered, the boy king Tutankhamun’s mummy is actually one of the worst preserved bodies ever found. Most of his skin, which is papery and ashen, has shriveled away, revealing many bones. It was initially very difficult for the team to unwrap the mummy because it appeared the anointing oils that were most likely used during the mummification ceremony had caused the mummy to stick to the tomb.

As was traditional, Tutankhamen had many names throughout his life. The name “Tutuankhamun” was his birth name, and “Tutankhaten” was his prince name. When he became Pharaoh, his name was changed again to “Nebkheperure.” He became Pharoah at the age of nine, after his father Akhenaten died, and after a reign of only ten years, died at the age of nineteen. Before his death, he had married his half-sister, and though she was impregnated twice, both were stillborn girls and Tutankhmen died with no heirs.

There’s much speculation about exactly how he died due to the fact that there are no surviving accounts of it in Ancient Egyptian literature, and no scholar, archaeologist, or anthropologist yet has been able to determine cause of death due to the deterioration of the corpse. The prevailing theory is that, due to evidence of a broken leg and an infection close to the time of death, that it was accidental. 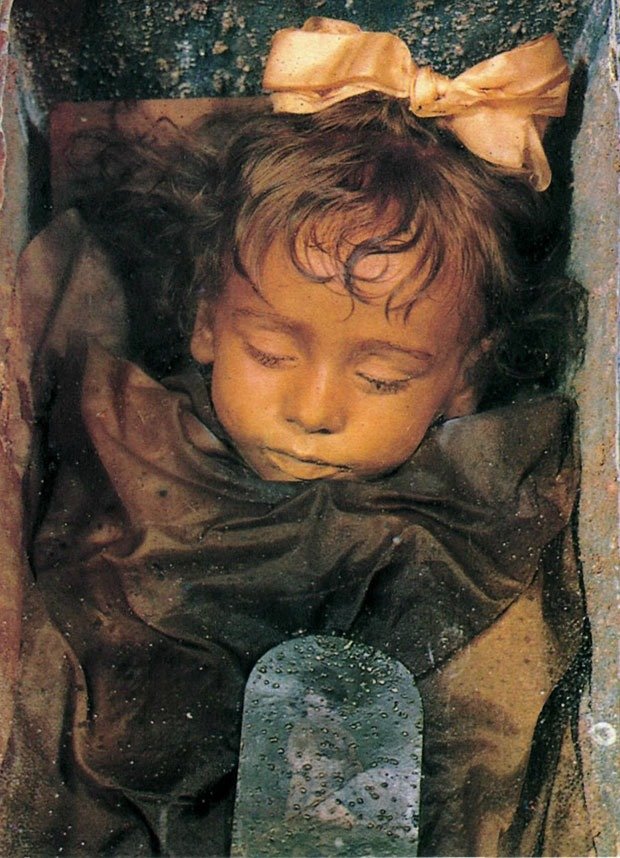 However, some of the most well-known or well-preserved mummies are not to be found in Egypt. Rosalia Lombardo, also called the Sleeping Beauty of Palermo, was born in Palermo on December 13, 1918, and died on December 6, 1920 of pneumonia at the age of two years. Rosalia’s father, Mario Lombardo, was sorely grieved upon her death, so he approached Alfredo Salafia, a noted embalmer, to preserve her. Her body was one of the last corpses to be admitted to the Capuchin catacombs of Palermo in Sicily, where over 8000 mummies reside.

The formula that preserved her so well had been lost for decades but was recently rediscovered. The embalming procedure, performed by Professor Alfredo Salafia, consisted of formalin to kill bacteria, alcohol to dry the body, glycerin to keep her from over drying, salicylic acid to kill fungi, and the most important ingredient, zinc salts (zinc sulfate and zinc chloride) to give the body rigidity. The formula is 1 part glycerin, 1 part formalin saturated with both zinc sulfate and chloride, and 1 part of an alcohol solution saturated with salicylic acid.

The Eyes Have It

Despite the fact that her body is nearly 100 years old, the preservation was so well-done and thorough that an examination and x-ray performed on the body showed intact organs, muscle tissue, and unbroken skin with very little discoloration. The most amazing part about this little girl is that, without explanation, people have observed her eyes to open and close, as though she really is only sleeping.

The Lady of Dai 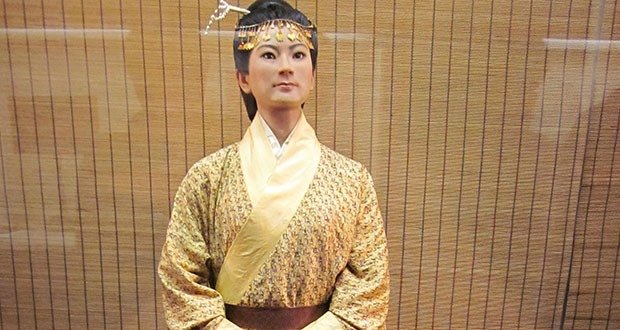 In China, Xin Zhui also known as Lady Dai or Marquise of Dai, was the wife of Li Cang, the Marquis of Dai, during the Han Dynasty (206 BCE – 220 CE). She gained fame more than 2,000 years after her death, when her tomb was discovered inside a hill known as Mawangdui, in Changsha, Hunan, China. After opening the tomb, workers discovered her exceptionally preserved remains alongside hundreds of valuable artifacts and documents.

Xin Zhui lived an extravagant lifestyle. As a noble, Xin Zhui also had access to a variety of imperial foods, including various types of meat, which were reserved for the royal family and members of the ruling class. Much of her clothing was made of silk and other valuable textiles, and she owned a variety of cosmetics. As age caught up with her, Xin Zhui suffered from a number of ailments that would eventually lead to her death.

Alongside a number of internal parasites, she also had coronary thrombosis and arteriosclerosis, most likely linked to excessive weight gained due to a sedentary lifestyle. A fused spinal disc probably caused her immense pain, which contributed to a decrease in physical activity. She also suffered from gallstones, one of which lodged in her bile duct and further deteriorated her condition. 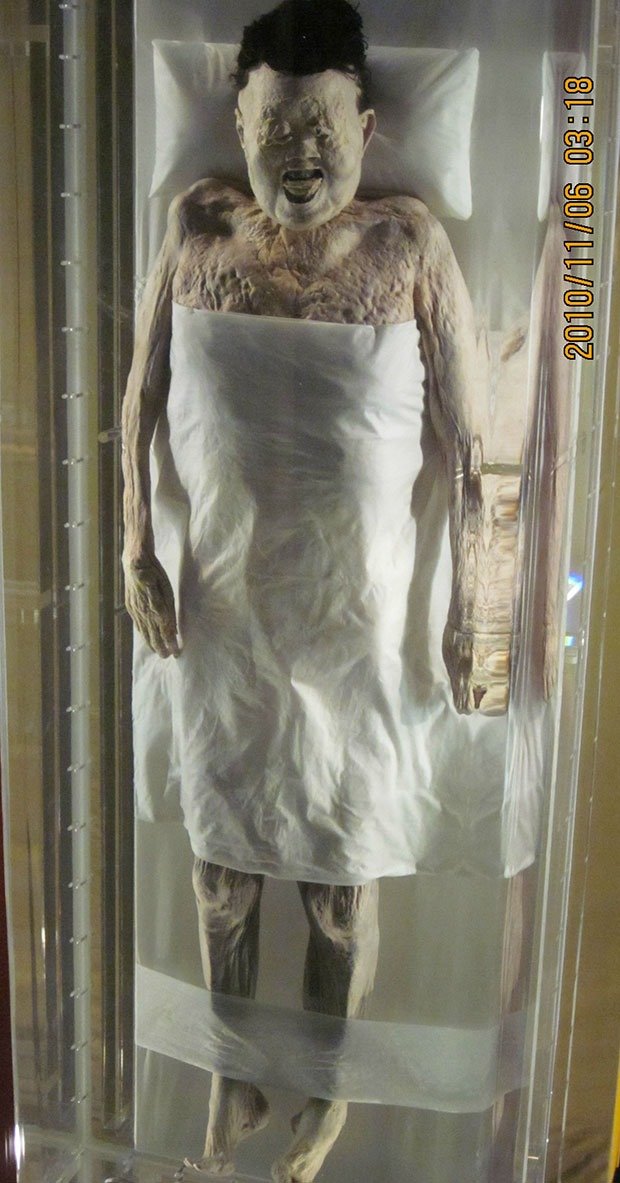 In 1971, workers digging an air raid shelter for a hospital near Changsha unearthed the tomb of Xin Zhui, as well as the tombs of her husband and a young man who is most commonly thought to be their son. With the assistance of over 1,500 local high school students, archaeologists began a large excavation of the site beginning in January 1972. Xin Zhui’s body was found within four rectangular pine constructs that sat inside one another which were buried beneath layers of charcoal and white clay. The corpse was wrapped in twenty layers of clothing bound with silk ribbons.

Xin Zhui’s body was remarkably preserved. Her skin was soft and moist, with muscles that still allowed for her arms and legs to flex at the joints. This preservation allowed doctors at Hunan Provincial Medical Institute to perform an autopsy on 14 December 1972. Much of what is known about Xin Zhui’s lifestyle was derived from this and other examinations. 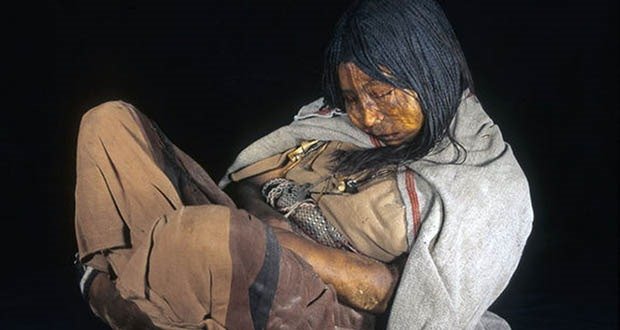 The Children of Llullaillaco or Children of the Cold are mummies discovered by Dr. Johan Reinhard and his archaeological team on 16 March 1999 at Mount Llullaillaco, which lies on the border of Chile and Argentina. The burial is believed to have taken place 500 years before. They are said to be the best preserved Inca mummies of all time. Three days into their search for Inca sacrifice sites, Reinhard’s team discovered the grave site containing two girls and one boy. Several gold, shell and silver statues, textiles and pottery were also found. The younger girl’s body had been struck by lightning, causing burn damage across her body. The other two mummies remained in good condition. Statues made of precious metals and textiles were among the grave goods found.

The oldest mummy, a girl found to be around the age of fifteen, was dubbed “La Doncella” which translates to “The Maiden”. A bacterial infection was discovered in her lungs during an examination. She wore a dress with her hair braided, along with a headdress. DNA testing indicated that the two girls were half sisters, where the boy had no relation. La Doncella had been drugged by coca leaves and a maize beer known as chicha, dying in her sleep, which was also present on the other mummies. It is believed that La Doncella was an aclla, or Sun Virgin. That is, she was chosen and sanctified as a toddler to live with other girls and women who would become royal wives, priestesses, and sacrifices. The practice of ritual sacrifice in the Inca society was to ensure health, rich harvests and preferable weather. 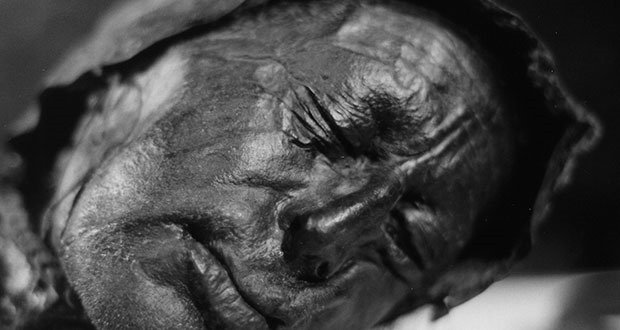 A bog body is a human cadaver that has been naturally mummified within a peat bog. Such bodies, sometimes known as bog people, are both geographically and chronologically widespread, having been dated to between 8000 BCE and the Second World War. The unifying factor of the bog bodies is that they have been found in peat and are partially preserved; however, the actual levels of preservation vary widely from perfectly preserved to mere skeletons.

The oldest known bog body is the skeleton of Koelbjerg Woman from Denmark, who has been dated to 8000 BCE, during the Mesolithic period. The oldest fleshed bog body is that of Cashel Man, who dates to 2000 BCE during the Bronze Age. The overwhelming majority of bog bodies – including famous examples such as Tollund Man, Grauballe Man and Lindow Man – date to the Iron Age and have been found in Northern European lands, particularly Denmark, Germany, the Netherlands, the United Kingdom and Ireland. Such Iron Age bog bodies typically illustrate a number of similarities, such as violent deaths and a lack of clothing, leading archaeologists to believe that they were killed and deposited in the bogs as a part of a widespread cultural tradition of human sacrifice or the execution of criminals. The newest bog bodies are those of soldiers killed in the Russian wetlands during the Second World War. 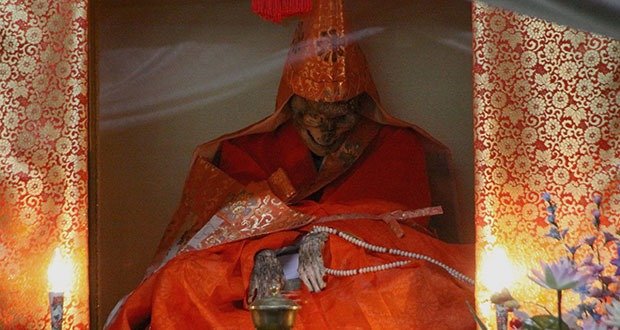 Buddhist mummies, also called flesh body bodhisattvas, full body sariras, or living buddhas (Sokushinbutsu) refer to the bodies of Buddhist monks and nuns that remain incorrupt, without any traces of deliberate mummification. These are venerated by some Buddhists who believe they successfully were able to mortify their flesh to death. The practice to purposely make undecomposed bodies is seen as controversial and contradictory in Buddhism believing in impermanence. Many were destroyed or lost in history.

Some were naturally formed. Some Mahayana Buddhist monks left instructions to be followed after their deaths, which often included having them buried sitting in a lotus posture, put into a vessel with drying agents (such as coal, wood, paper, or lime) and surrounded by bricks, to be exhumed later, usually after three years. The preserved bodies would then be decorated with paint and adorned with gold.The mummies of monks (Sokushinbutsu) in Japan practised nyūjō, which caused their own death by adhering to a wood eating diet made up of salt, nuts, seeds, roots, pine bark, and urushi tea. They were then buried alive in a pine-wood box full of salt connected by a tube for air and would ring a bell signaling they were alive. When the bell stopped ringing the air tube was removed. 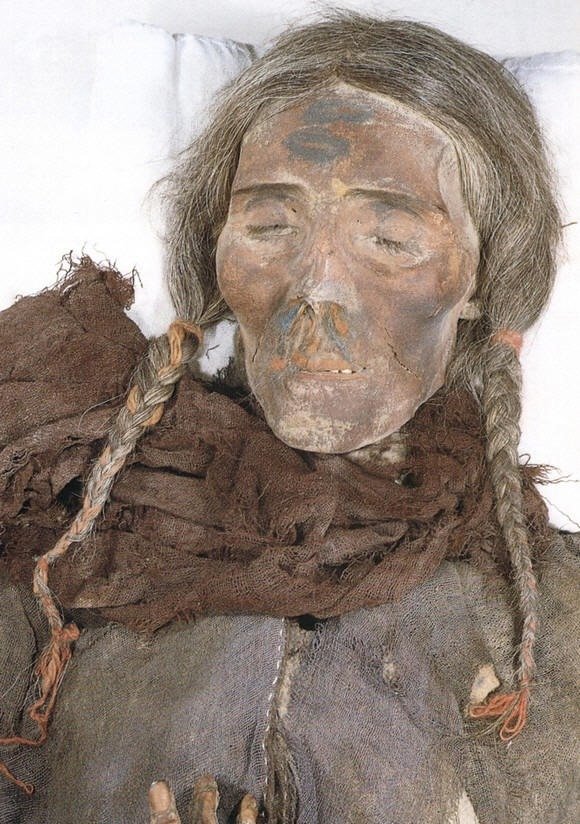 At the beginning of the 20th century, European explorers such as Sven Hedin, Albert von Le Coq and Sir Aurel Stein all recounted their discoveries of desiccated bodies in their search for antiquities in Central Asia. The mummies share many typical Europoid body features (elongated bodies, angular faces, recessed eyes), and many of them have their hair physically intact, ranging in color from blond to red to deep brown, and generally long, curly and braided. It is not known whether their hair has been bleached by interment in salt. Their costumes, and especially textiles, may indicate a common origin with Indo-European neolithic clothing techniques or a common low-level textile technology. Chärchän man wore a red twill tunic and tartan leggings. 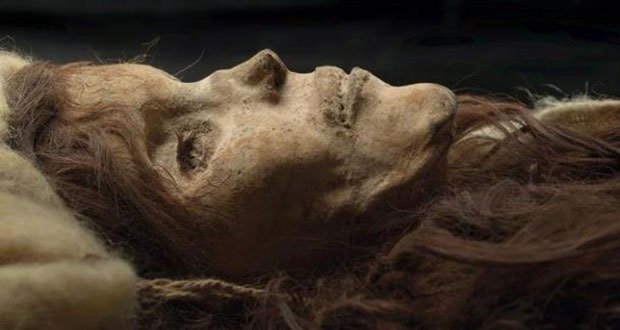 In 2007 the Chinese government allowed a National Geographic Society team headed by Spencer Wells to examine the mummies’ DNA. Wells was able to extract undegraded DNA from the internal tissues. The scientists extracted enough material to suggest the Tarim Basin was continually inhabited from 2000 BCE to 300 BCE and preliminary results indicate the people, rather than having a single origin, originated from Europe, Mesopotamia, Indus Valley and other regions yet to be determined.

25 Kickass and Interesting Facts About Sex