Here are 30 Interesting Facts About Moon. 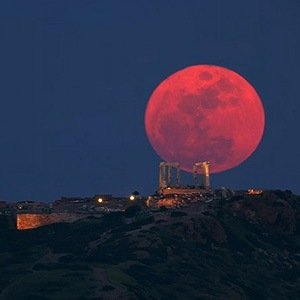 1. The Blood Moon, or Hunter’s Moon, was given its name because it would illuminate the prey of the hunter, much like the harvest moon allowed the farmers to harvest through the night. – Source

2. Candles were put on cakes originally by the Greeks, who would put them on rounded cakes to signify the moon and its glow in honor of Artemis, the Goddess of the moon. – Source

3. To see a lunar rainbow or ‘moonbow’, the moon must not only be full, it also has to be less than 42 degrees in the sky, within 2 to 3 hours before sunrise, and of course, there must be rain at that precise moment. – Source

4. All the American flags placed on the moon are now white due to radiation from the sun. – Source 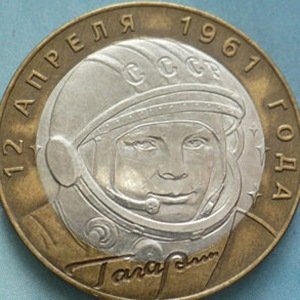 6. Neil Armstrong and Buzz Aldrin left one of Yuri Gagarin’s cosmonaut medals on the moon to pay tribute to his accomplishment as the world’s first man in space – Source

7. During the Apollo 12 mission, a 2-1/2 ton piece of the Lunar Module was experimentally crashed onto the surface of the moon. The unexpected result was that the moon “rang like a bell” for nearly an hour. – Source

8. President Nixon gave the President of Ireland a flag that traveled to the moon and a piece of moon rock. The moon rock was accidentally dumped and is worth $5 million dollars. – Source

10. You will need a telescope 50 times the size of the Hubble to see objects left by humans on the moon. Even if we were to use the Hubble Space Telescope to look at the moon, a football stadium sized object would appear as only one pixel. – Source 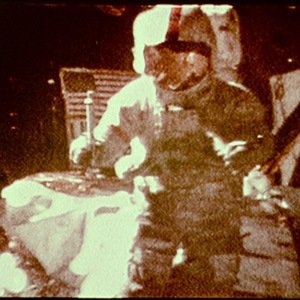 11. Astronaut David Scott dropped a hammer and a feather on the moon, repeating Galileo’s gravity experiment. Here is the youtube video

12. A Soviet probe, “Luna 15”, crashed into the surface of the moon while Buzz Aldrin and Neil Armstrong were still on the moon. – Source

14. Moon dust is so abrasive that during the Apollo missions, it wreaked havoc on astronaut’s space suits. In one case, it actually ate through three layers of Kevlar. – Source

15. Thad Roberts, a NASA intern, stole a safe full of moon rocks, sprinkled them on a hotel bed, and had sex with his girlfriend on top of them. He was sentenced to 7 years in federal prison. – Source 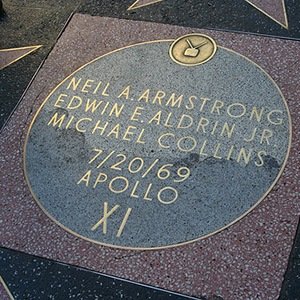 16. Neil Armstrong and the Apollo XI crew have moons on the Hollywood Walk of Fame instead of stars. – Source

17. Apollo 14 commander, Alan Shephard once said “If somebody’d said before the flight, ‘Are you going to get carried away looking at the Earth from the Moon?’ I would have said, ‘No, no way.’ But yet when I first looked back at the Earth, standing on the Moon, I cried.” – Source

18. In the sixties, USA considered detonating a nuclear warhead on the moon to boost morale of the American people. – Source

19. Pete Conrad’s first words during the Apollo 12 Mission on the Moon was said in order to win a $500 bet proving that astronauts are not given a script of what to say when stepping off the ladder. He said “Whoopee! Man, that may have been a small one for Neil, but that’s a long one for me.” – Source

20. In 2006, NASA admitted that they no longer had the original video tapes of the moon landing because they recorded over them. – Source 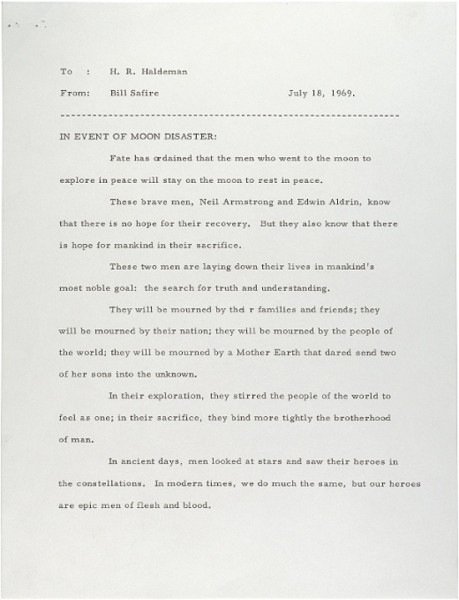 21. President Nixon had a speech ready in the event the astronauts were stranded on the moon – Source

23. Without the Moon, the Earth’s axis would shift unpredictably and seasons would not be constant – Source

24. Neil Armstrong before leaving for the Apollo 11 Space mission signed hundreds of autographs and had them dropped in the mail on the exact date of their moon mission, in case he died during the mission and his family could monetize his autographs. – Source

25. After writing several scathing editorials about a scientist’s “ridiculous” claim that the moon could be reached with rockets, the New York Times published a correction about three days before the moon landing in 1969. – Source 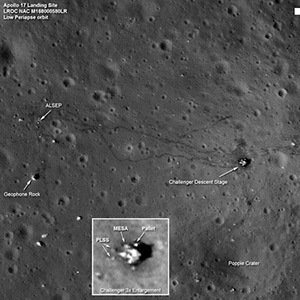 27. Apollo 17 astronaut Eugene Cernan, the last man on the moon, wrote his daughter Tracy’s initials, TDC, in the lunar dust “knowing those three letters would remain there undisturbed for more years than anyone could imagine” – Source

28. Apollo 11 Astronauts went through customs upon returning from the moon. – Source

29. The word “lunatic” originally referred to someone who would become periodically insane with the changes of the moon. It literally means “moon-sick” – Source

30. NASA put a man on the moon with a computer that had 1/6th the computing power of today’s TI-83 calculator. – Source