Here is a brief article about Serial Killers for some chilling early morning reading. 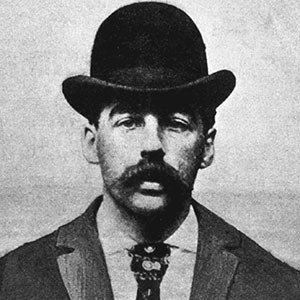 Herman Webster Mudgett, better known as Dr. Henry Howard Holmes, one of the first recorded serial killers in the currently accepted sense, was better known as Dr. H.H. Holmes, a pharmacist. In 1886, he purchased a drug store in Chicago, later buying up property around it until he owned the block itself. The buildings were remodeled into a hotel, named the World’s Fair Hotel in time for the 1893 World’s Fair. 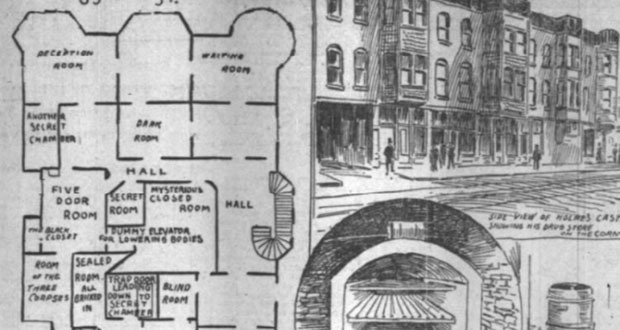 The ‘hotel’ had been constructed by a motley crew of workers, none of whom knew the full layout and all of whom were sacked before completion to ensure their complete ignorance of the structure. Most of the rooms had no windows. Doors and stairways went nowhere, hallways were cul-de-sacs. Gas jets were built into the walls of some of the rooms, blowtorches in the walls of others, and a chute led from the upper floors to the basement, where there were two furnaces big enough to incinerate a corpse or three. The whole place was decked out for torture and murder, with a side order of sick mind games to go. 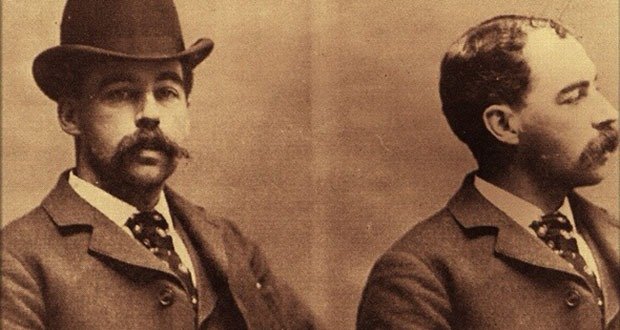 He’d entice a horrifying number of hapless indigents (usually young women) back to the house of horror, killing them and disposing of their bodies via the ovens, lime pits or acid, often selling on the remains to medical schools using contacts accrued during a lifetime working in and around medicine. When he was eventually caught, he’d confess to 27 murders. Convicted and sentenced to death, Dr. H.H. Holmes was hung… but the rope didn’t break his neck, and he’d hang there being slowly strangled for twenty minutes before finally succumbing.

The Murder Castle, as his huge monument to terror and pain eventually became known, was mysteriously gutted by fire in 1895, and the shell of the building was finally demolished in 1938. 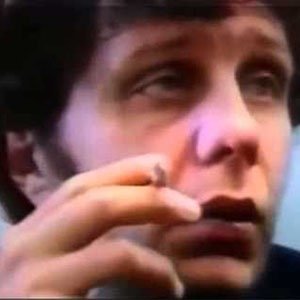 In February of 1997 Ilshat Kuzikov was arrested in St. Petersburg for the murder of three of his drinking buddies over the span of four years, starting in 1992 and ending in 1996.

After further details came to light, it was later found that he had not only killed his friends but had also sampled their flesh. In fact, his cannibalism appeared to be the main motive for the killings, with Kuzikov stating that he would ask the friend over to his flat for a nightcap before stabbing them to death, eating parts of their body and then disposing of them in a garbage dump. 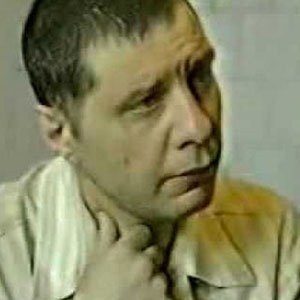 He had even developed a recipe for his uncommon tastes:

“First, you fry the meat in one saucepan in a little oil; liver is best. Then, in another pot, you fry onions. Put them together with either stock or water and simmer for half an hour.” Ilshat Kuzikov was found to be insane when he was brought to trial and he was sentenced to life in closed psychiatric confinement. 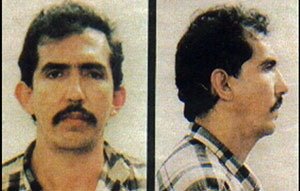 Garavito is widely considered to be the most deadly convicted serial killer ever to have lived, earning him the nickname “La Bestia”, or “The Beast.” He confessed to the killing of 140 children over the course of just half a decade in Columbia, but is suspected of killing and raping at least 400 in total. 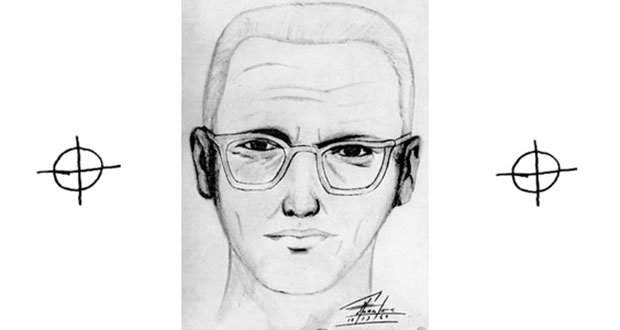 One of the most famous serial killers of all time, the Zodiac Killer terrorized San Francisco residents for the better part of a year. The Zodiac Killer case was as fascinating as it was horrifying, due to the killer’s habit of toying with police and reporters. 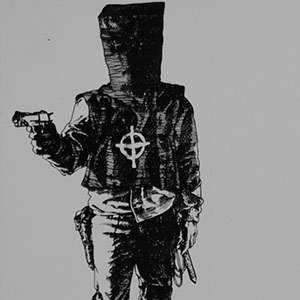 The Zodiac Killer was confirmed to have murdered at least 5 people during his killing spree, though he has claimed the number was actually 37. He was famous for the intricate ciphers he would send to newspapers and police, which would often contain very creepy messages and occasionally threats once solved. 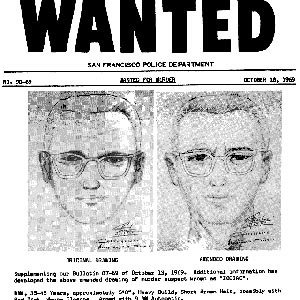 One of the most famous messages was translated to read the following:

LIKE KILLING PEOPLE BECAUSE IT IS SO MUCH FUN IT IS MORE FUN THAN KILLING WILD GAME IN THE FORREST BECAUSE MAN IS THE MOST DANGEROUE ANAMAL OF ALL TO KILL SOMETHING GIVES ME THE MOST THRILLING EXPERENCE IT IS EVEN BETTER THAN GETTING YOUR ROCKS OFF WITH A GIRL THE BEST PART OF IT IS THAE WHEN I DIE I WILL BE REBORN IN PARADICE AND ALL THEI HAVE KILLED WILL BECOME MY SLAVES I WILL NOT GIVE YOU MY NAME BECAUSE YOU WILL TRY TO SLOI DOWN OR ATOP MY COLLECTIOG OF SLAVES FOR MY AFTERLIFE. EBEORIETEMETHHPITI 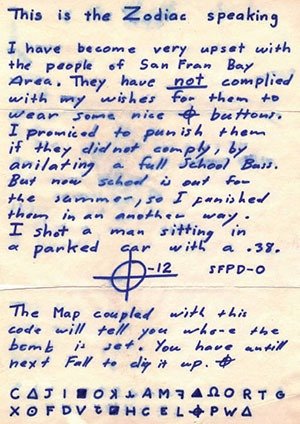 The Zodiac Killer would also hide hints and clues of what he’d do next in his letters, although they’d often prove to be false. For example, in the following letter he claimed that his next target would be a school bus filled with children, though this never came to fruition:

“This is the Zodiac speaking.

I am the murderer of the taxi driver over by Washington St + Maple St last night, to prove this here is a blood stained piece of his shirt. I am the same man who did in the people in the north bay area.

The S.F. Police could have caught me last night if they had searched the park properly instead of holding road races with their motorcicles seeing who could make the most noise. The car drivers should have just parked their cars and sat there quietly waiting for me to come out of cover.

School children make nice targets, I think I shall wipe out a school bus some morning. Just shoot out the front tire + then pick off the kiddies as they come bouncing out.”

The symbol of the Zodiac Killer has become almost as famous as the murderer himself, with its simple design of a circle over a cross. Many have attempted or even claimed to have solved the mystery of who the Zodiac Killer is, but none have been proven to be true.

The Zodiac’s puzzles, cryptograms and riddles have continued to be put under scrutiny to this very day, and the police case file has been open since 1969, but no conclusive evidence has ever been brought forward. 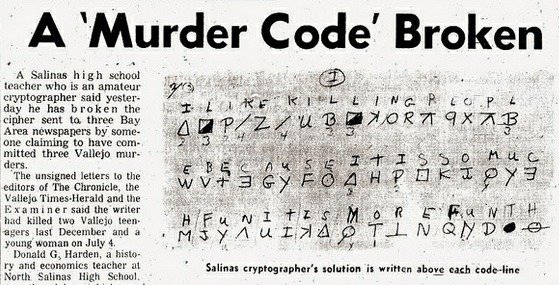 The subject of a number of popular films and books, the case of the unidentified Zodiac Killer continues to mesmerize and disgust people even now. 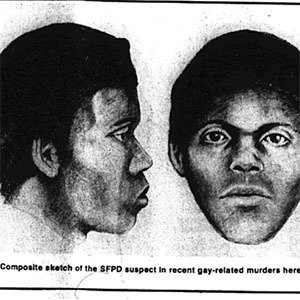 The Doodler, or Black Doodler as he was sometimes referred to, was responsible for 14 killings in under two years. The killer targeted members of San Francisco’s gay community, often meeting with his victims at gay nightclubs and bars.

The Doodler was named as such because of his habit of sketching each of his victims before killing them. He would draw out a picture of his targets, then give it to them as a means to initiate a conversation. This would often lead to them leaving with the Doodler, before engaging in sex and being stabbed to death. 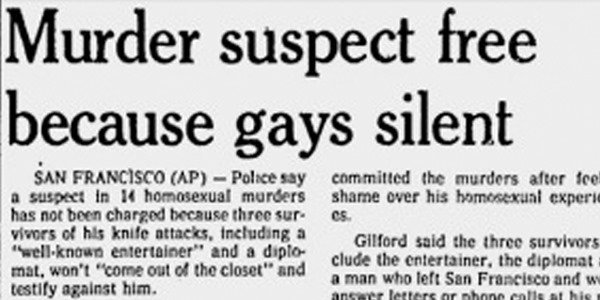 Story Behind Flags of the World - Infograph