1. Sanchi Is Found In India

Ever since the 14th century, Sanchi, also called, Kakanaya, remained deserted and undiscovered. That is, until 1818 when British General Taylor rediscovered the site. It was established an archaeological museum in 1919 by Sir John Marshall.

The Stupa, a Buddhist commemorative monument, was made especially for Emperor Ashoka, who belonged to the Maurya Dynasty. It was built where his wife, Devi, was born and was the place he married her.

3. The Great Stupa Had Multiple Pillars, One Of Which Was Called Ashoka Pillar

The finely polished sandstone pillar was created on the side of the main Torana, a free-standing ornamental or arched gateway. It was named Ashoka Pillar. It is about 42-feet high. The national emblem of India is embedded into the Ashoka Pillar.

4. The Monument Is Known For The Great Buddhist Architectural Style It Was Made In

The emblem consists of a round and slightly tapering monolithic shaft, with a bell-shaped capital mounted by an abacus with crowing monument of four lions. The famous Stupa is situated on the top of a hill in Sanchi Town, which is in Raisen District in Madhya Pradesh. 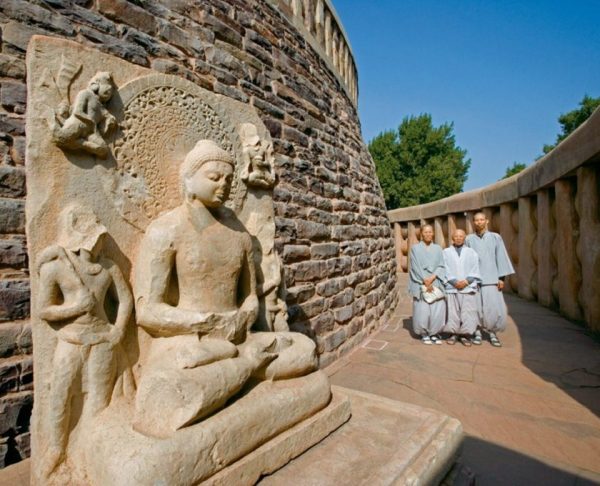 5.  Many Sutpa’s Were Built To Spread Buddhism

The Great Stupa was commission by Emperor Ashoka in the 3rd century BCE. It was commissioned after restructuring the mortal remains of Buddha. Many of the other Stupa’s were built shortly after that to spread Buddhism.

Sanchi was made a World Heritage Site of UNESCO in 1989. Sanchi is known as a haven for all of the Buddhist population.

7. After The 12th Century CE, Sanchi Was Abandoned

After the decline of Buddhism, Sanchi was slowly abandoned. After the last people left, the jungle overran it. It was restored when the Shunga dynasty took over. The Stupa was expanded to double its original size. The Shunga used flattened stone slabs to cover the original bricks.

8. Next Came The Satavahana Rule

Further construction and decoration occurred when the Satavahana’s came into power. According to the inscriptions on the gates, the four decorated gateways, or torans, which face all the cardinal directions, were added during the 1st century BCE. The torans contain illustrations of various events that happened in the life of Buddha based on the Jataka tales.

9. Each Gate Way Is Made Up Of Two Square Posts

On top of the square posts in sculptured animals or dwarves, surmounted by three architraves. All the sculptures are covered in Jataka stories of Buddha’s previous lives. The names of the donors to the gateways are also inscribed into it.

Although Lord Buddha (as he is often referred to as) has never visited the Stupa physically (at least that has been recorded), it is known to carry great value for the Buddhist population. It’s a surprise to a lot of people that the Stupa remained undiscovered and unexplored until the 14th century.