“A lightsaber—any weapon—only achieves worth in how it is wielded—in the effort, the struggle of one who holds it.” – Darth Traya.

Lightsaber combat refers to several schools of martial arts specialized in, though not limited to, fighting with a lightsaber. Such fighting forms were required to compensate for or take advantage of the unique attributes of lightsabers, notably the odd balance of the weapon, all of the weight being in the hilt, and the omni-directional cutting edge. The most prominent lightsaber-oriented combat styles were the seven forms of the Jedi Order, which this post will be about.

There are, of course, several more miscellaneous techniques such as Trakata and Dun Moch, but they’ll be in another post, if people are interested. 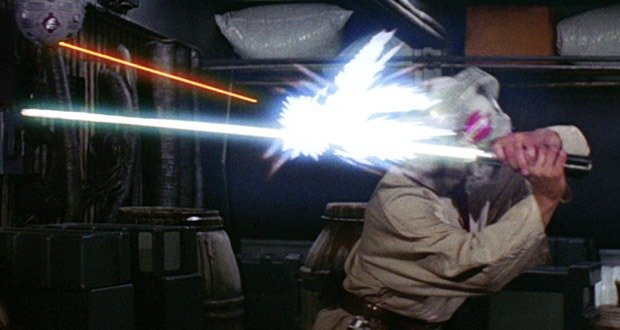 “It is simple, and its simplicity is strength.” – Kreia

Also known as The way of the Sarlacc or the Determination form, Shii cho was the first of the classical 7 forms of lightsaber combat. It was developed during the transitional period within the Jedi order from Metal swords to lightsabers. Shii-Cho was intended to cater to these new weapons, establishing the basic motions and target zones utilized with a lightsaber. As Shii-Cho was effectively an experimental combat form, and was created prior to the emergence of Dark Jedi and Sith Lords, it did not address the issue of lightsaber-to-lightsaber combat, and was quickly replaced by Form II. Despite this, Shii-Cho continued to find a niche as a training form, with almost every Jedi duelist receiving some instruction in it, and including elements in their own combat styles. Shii-Cho was considered an effective fall-back option when no other form or combat style would do.

In combat, Form I lightsaber combat was wild and raw, relying on deliberate tactics and being primarily aimed towards disarming rather than injuring foes, in keeping with Jedi philosophy. Basic initiates in the style demonstrated rather clumsy performance, though in the hands of a master, Shii-Cho was fluid but highly randomized and unpredictable. Such masters include (but are not limited to) Kit fisto, who employed a dual wielded Shii cho variant against droid general grievous, and the famous kyle katarn alongside almost all temple battlemasters during the days of the Galactic Republic.

“He is a fencer. Leverage, position, advantage—they are as natural to him as breathing.” – The spirit of Qui-Gon Jinn to Yoda on Count Dooku

Also known as the Way of the Ysalamiri or the contention Form, was the second of the 7 classical forms of lightsaber combat. Developed for the purpose of lightsaber-to-lightsaber combat, to address the failings of Form I, Makashi was the most dueling-centric of the seven classical forms. Relying on precision and efficiency over Shii-Cho’s wild, sweeping motions, Form II allowed an initiate to defend himself against an opponent with minimal effort, while placing a heavy focus on avoiding disarmament.

Makashi was described as elegant and focused, and was based on balance and footwork to outmaneuver opponents. Fluidity, precision, and economy of motion were relied on, rather than strength, with Form II bladework heavily utilizing jabs and light cuts rather than hack and slash movements. It was at its best when going up against a single opponent, but as time went on blaster wielding opponents became more and more apparent while single-duelists became increasingly absent. As the form was designed for lightsaber combat only, it had next to no defence against blasters which made the form lose alot of its practical applicability, and caused its relative obsolence. It would eventually be supplanted by the more defensively orrientented form III.

“That is so like you, Master Kenobi. I am called a great swordsman because I invented a lethal style; but who is greater, the creator of a killing form—or the master of the classic form?” – Mace Windu to Obi-Wan Kenobi

Also known as the way of the Mynock or the Resillience form, was the third of the 7 classical forms of lightsaber combat. Soresu was developed during the widespread emergence of blasters as an offensive weapon. Essentially a development on Form I blast-deflect training, Soresu relied on tight bladework and subtle dodges to provide maximum defensive coverage, minimizing exposure to ranged weaponry. Over time, Soresu transcended this basic origin, and came to be considered the ultimate expression of non-aggressive Jedi philosophy.

Like Makashi, Soresu relied on economy of motion and energy efficiency, keeping up constant blade-movement to build up momentum and minimize energy-expenditure. Form III focused on strong defensive technique to essentially outlast an opponent, waiting until he began making mistakes due to frustration or fatigue, before taking advantage of these lapses and countering. However, despite its effectiveness, Soresu would receive heavy criticism due to its lack of offensive capabilities, as it facilitated survival rather than victory. As an answer to these weaknesses, the highly aggressive Form IV: Ataru and Form V: Shien forms would be developed side-by-side.

“Ataru is the name given to the movements of this form—though it is aggressive, it is focused, and its best use is in combat against a single opponent.” – Zez-Kai Ell

Also known as the way of the Hawk-bat or the agression form, Ataru was the fourth of the seven classical lightsaber forms, its origins going as far back as the mandalorian wars, when it was more commonly used by Jedi. Though its popularity fell in the later stages of the Republic, it nevertheless remained a formidable weapon among both Jedi and Sith.

An aggressive style, Form IV was fast-paced and effective against single opponents, though weaker in prolonged combat and confined spaces. Also, it was not recommended for use against opponents wielding blasters. Ataru was characterized by Force-assisted acrobatics, such as somersaults and leaping strikes, both for attack and defense. Another characteristic of the form was its fast, powerful strikes from multiple directions.

Form V: Shien and Djem so

Also known as the way of the Krayt Dragon or the Perseverance form, Form V was the fifth of the classical seven forms of lightsaber combat. It was developed by practitioners of Form III who felt that the defensively-minded form would unnecessarily extend time spent in combat by forcing its users to wait for an opportunity to strike rather than create their own openings. Form V combat was characterized by power attacks and defense immediately followed by a counter-strike.

Shien, considered the classical variant of Form V, was more adept at blocking blaster bolts than for blade-to-blade combat, whereas Djem So was developed later and was specifically intended for use in lightsaber combat. Both Shien and Djem So were designed to use an opponent’s attack against them, as evidenced by Shien’s focus on returning blaster bolts to their origin and Djem So’s emphasis on immediate counter-attacks. Although some Jedi felt that Form V encouraged aggression and domination, that sentiment did not stop many Jedi from practicing the form.

Also known as the way of the Rancor, the moderation form or the diplomat’s form, Niman was the sixth form of classical lightsaber combat. The form was characterized by its ”Jack of all trades” philosophy, combining elements of the preceding lightsaber forms into a single, generalized form. Niman balanced out between the various specializations of the other forms, covering many of the basic moves, but focusing on overall moderation. This resulted in a fighting style that lacked a significant advantage, but also lacking any serious drawbacks, and thereby not leaving adherents as exposed as some of the more aggressive or specialized forms. Overall, Niman had a fairly relaxed focus on bladework, designed as a simple, easily mastered fighting form for Jedi who preferred to devote most of their time to study and diplomacy. Despite this, it could be absolutely deadly in the hands of a skilled practitioner

To compensate for the relaxed focus on bladework and lack of significant specialization, Niman training regimens encouraged the inclusion of Force-based attacks in combat, such as telekinetic pulls and shoves used in sync with lightsaber strikes. Also, as Niman was developed from two pre-existing martial arts fighting forms that both emphasized the use of dual-blades, it provided a firm foundation for duelists looking to study into such practices. Ultimately, Niman’s success in combat was dependent on a practitioner’s intuition and creativity in combat, rather than the responses common to the other forms.

“I created Vaapad to answer my weakness: it channels my own darkness into a weapon of the light.” ―Mace Windu to Obi-Wan Kenobi

Also known as the Way of the Vornkr or the Ferocity form, Form VII was the last of the classical seven forms of lightsaber combat. the Juyo incarnation of Form VII was described as the most vicious form of lightsaber combat and was said to involve significant internal focus on the part of the user. As time passed, knowledge of Form VII became restricted among the Jedi Order, whose members were worried that its precepts would lead practitioners toward the dark side. In contrast, members of the Sith, such as Darth Maul, employed Juyo without reservation, as did Dark Jedi such as Galen Marek.

In the later days of the Old Republic, a new variation of Form VII, dubbed Vaapad after a creature native to the planet Sarapin, was created by Jedi Masters Mace Windu and Sora Bulq. Vaapad was explained as being a state of mind rather than just a fighting style, allowing the wielder to channel his own inner darkness into the duel, and accept the fury of the opponent. Windu, Bulq, and Windu’s Padawan Depa Billaba were three notable practitioners of the Vaapad variant. Records of both Juyo and Vaapad survived the Great Jedi Purge and were recovered by the New Jedi Order, who preserved the records of Form VII.

Other practitioners include Rahm Kota, Quinlan Vos and Darth Bane.