Here is a list of Top 10 CQC(Close quarters combat) Weapons. 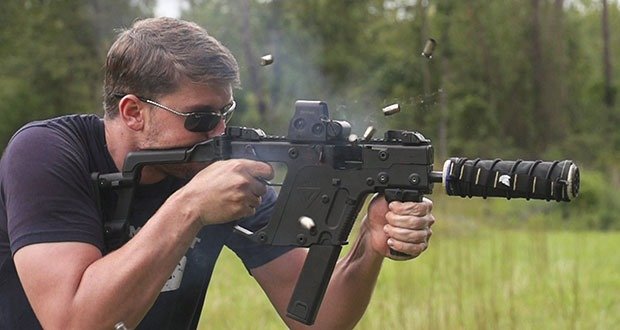 The KRISS Vector series is a family of weapons based upon the parent submachine gun design developed by KRISS USA, formerly Transformational Defense Industries (TDI). They use an unconventional delayed blowback system combined with in-line design to reduce perceived recoil and muzzle climb.

The Vector’s action, the KRISS Super V System (KSVS), is an articulated mechanism which allows the bolt and an inertia block to move downward into a recess behind the magazine well. The theory is that at the end of this travel, energy is transmitted downward rather than rearward, reducing felt recoil.

.22 LR, .40 S&W, and 9×19mm Parabellum variants were mentioned when the gun was first released. Gen 2 variants with multiple design changes including a new 9mm variant were confirmed at the 2015 SHOT show, though the other versions have yet to materialize. The original Vector was designed to accept standard Glock 21 pistol magazines; a special “MagEx 30” kit was available to convert a factory 13-round .45 ACP Glock magazine to an extended high-capacity version, though this is now marketed as a “25+” round kit. The newer 9×19mm versions instead use standard Glock 17 magazines. 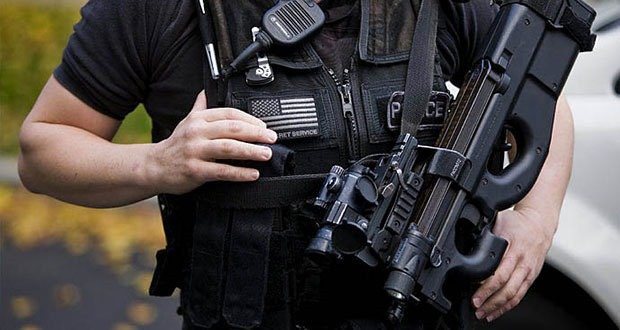 The FN P90 is a personal defense weapon (PDW) designed and manufactured by FN Herstal in Belgium. Created in response to NATO requests for a replacement for 9×19mm Parabellum firearms, the P90 was designed as a compact but powerful firearm for vehicle crews, operators of crew-served weapons, support personnel, special forces, and counter-terrorist groups.

Featuring a compact bullpup design with an integrated reflex sight and fully ambidextrous controls, the P90 is an unconventional weapon with a futuristic appearance. Its design incorporates several innovations such as a unique top-mounted magazine and FN’s small-caliber, high-velocity 5.7×28mm ammunition.

The P90 is currently in service with military and police forces in over 40 nations, such as Austria, Brazil, Canada, France, Greece, India, Malaysia, Poland, and the United States. In the United States, the P90 is in use with over 200 law enforcement agencies, including the U.S. Secret Service. While developed and initially marketed as a PDW, it can also be considered a submachine gun or compact assault rifle. The standard selective fire P90 is restricted to military and law enforcement customers, but since 2005, a semi-automatic version has been offered to civilian shooters as the PS90. 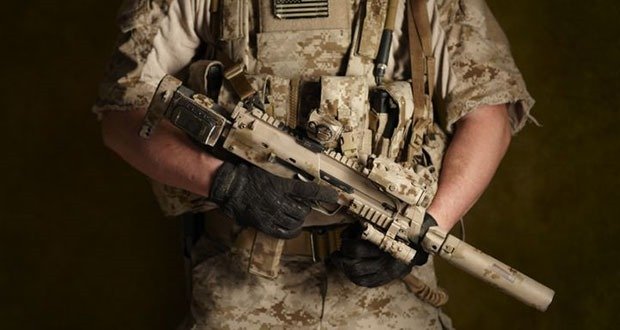 The MP7 is a German Personal Defense Weapon (PDW) manufactured by Heckler & Koch (H&K) and chambered for the HK 4.6×30mm cartridge. It was designed with the new cartridge to meet NATO requirements published in 1989, as these requirements call for a personal defense weapon (PDW) class firearm, with a greater ability to defeat body armor than current weapons limited to conventional pistol cartridges. The MP7 went into production in 2001. It is a direct rival to the FN P90, also developed in response to NATO’s requirement. The weapon has been revised since its introduction and the current production versions are the MP7A1 and newest MP7A2. The proliferation of high-quality body armor has begun to make guns that fire pistol ammunition (such as Heckler & Koch’s earlier MP5 submachine gun or USP pistol) ineffective. In response to this trend, Heckler & Koch designed the MP7 (along with the now-canceled UCP pistol, which uses the same ammunition) to penetrate body armor, but small enough to be used in place of either a pistol or a submachine gun.

The weapon allows a conventional 20-round, 30-round, or 40-round box magazine to be fitted within the pistol grip (the 20-round magazine being comparable in size to a 15-round 9×19mm magazine, while the 40-round magazine compares to a 30-round 9×19mm magazine). The weapon features an ambidextrous fire selector, bolt catch lever, and magazine release. It has an extendable stock and a folding front grip; it can be fired either one-handed or two-handed. It is compact and light, due to the use of polymers in its construction. 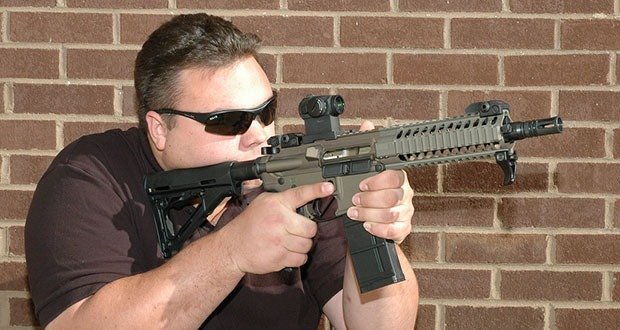 The M6 is a series of carbines designed and manufactured by LWRC International. It is based on the M4 carbine, with which it shares 80% of its parts.The ‘M’ model name is not a US military designation. Like the HK416, it features a proprietary short-stroke self-regulating gas piston system and bolt carrier/carrier key design, which prevents trapped gases from contacting the bolt carrier or receiver of the weapon, which reduces the heating and carbon fouling of the internals, simplifies field maintenance, and improves reliability. Standard length barrel is 16.1 in, with a 1/7 in twist (six lands, right twist) barrel with a ferritic nitrocarburized surface conversion which covers the barrel, inside and out, as well as the piston components. Barrel lengths of 10.5″, 12.7″, 14.7″ and 18″ (available for select models) are available 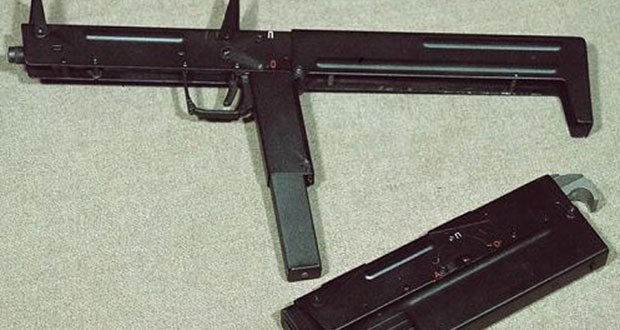 The PP-90 is a Russian 9 mm folding submachine gun, developed by the KBP Instrument Design Bureau in Tula for use with special units of the Russian Ministry of Internal Affairs (MVD). It is designed for close-quarters combat, particularly engagements that require the weapon deployed rapidly in unusual circumstances

During the design phase, the emphasis was placed on safety when operating the weapon. It is impossible to discharge the firearm in its folded position or when the stock is not fully deployed. The PP-90 also has a manual safety and fire selector. The safety toggle, installed on the left side of the receiver housing, has two settings: a top “P” position – indicating the weapon is safe and the bottom “O” setting – automatic fire. The “safe” setting ensures the bolt catch is disabled mechanically. The weapon’s internal safety mechanism features a drop safety that prevents the weapon from firing when dropped with a loaded chamber.

The submachine gun is fed from a detachable 30-round box magazine, placed in a well inside the hollowed pistol grip. The magazine catch is located inside the heel of the pistol grip.

For aimed firing the PP-90 uses flip-up iron sights (notch and front post), which lie flush with the receiver housing’s top cover when folded down. The threaded barrel can also accept a sound suppressor.

The submachine gun with spare magazines and a cleaning brush is carried in a holster that can be slung from a duty belt or shoulder rig. The weapon can also be used with a sling. 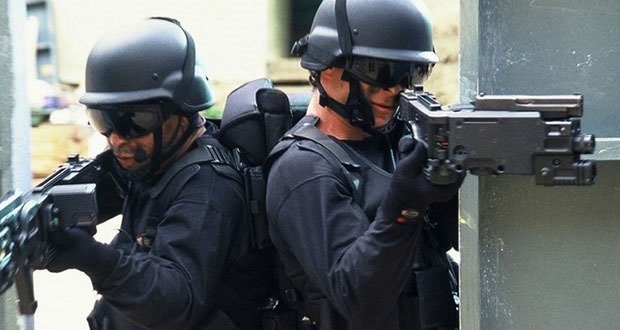 CornerShot is a weapon accessory invented by Lt. Col. Amos Golan of the Israeli Defense Forces in cooperation with American investors. It was designed in the early 2000s for SWAT teams and special forces in hostile situations usually involving terrorists and hostages. Its purpose is similar to that of the periscope rifle; it allows its operator to both see and attack an armed target, without exposing the operator to counterattack.

The CornerShot’s shooting range is claimed to be accurate and effective to 100 meters in 9×19mm, .40 S&W, and .45 ACP pistols, and is claimed to be effective to 200 meters with a 5.7×28mm pistol. The device is available in several variations, including the Beretta 92F, a model widely used by US security forces, the Glock, SIG Sauer, and CZ, the mechanism can also mount various accessories such as detachable cameras, audio/video transmission kits, visible and IR lasers and tactical flashlights, suppressors and rubber bullets. A standard pistol version is available, along with a 40 mm grenade launcher. Because they are fitted with high-resolution digital cameras, any variant can also be used as a surveillance tool. All the models come with the same stock camera and 2.5-inch color LCD monitor, providing a video observation and sighting system with transmission capability. The flashlight and camera let it operate in either day or night. A variety of optional interchangeable cameras, as well as a folding stock, are available, and a universal accessory rail is standard.

Future versions will be mountable on the US M16 rifle and a European joint assault weapon. The system can also be remotely emplaced and operated from behind camouflage, with a wire video-out connection sending images to a commander at a distance or saved to a 2-hour flash memory chip attached to the gunstock. 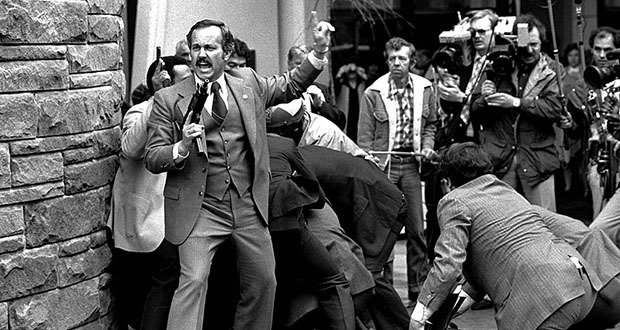 The Uzi is a family of Israeli open-bolt, blowback-operated submachine guns. Smaller variants are considered to be machine pistols. The Uzi was one of the first weapons to use a telescoping bolt design which allows the magazine to be housed in the pistol grip for a shorter weapon.

The first Uzi submachine gun was designed by Major Uziel Gal in the late 1940s. The prototype was finished in 1950. First introduced to IDF special forces in 1954, the weapon was placed into general issue two years later. The Uzi has found use as a personal defense weapon by rear-echelon troops, officers, artillery troops, and tankers, as well as a frontline weapon by elite light infantry assault forces.

The Uzi has been exported to over 90 countries. Over its service lifetime, it has been manufactured by Israel Military Industries, FN Herstal, and other manufacturers. From the 1960s through the 1980s, more Uzi submachine guns were sold to more military, law enforcement and security markets than any other submachine gun ever made. 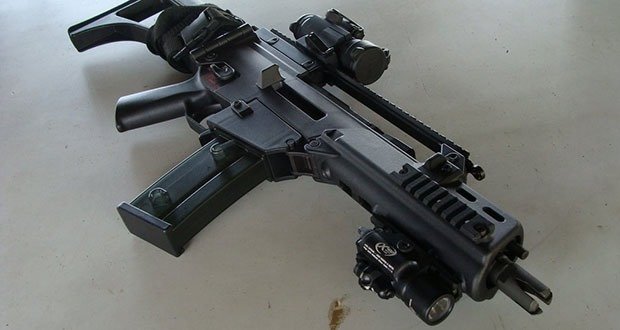 The Heckler & Koch G36C is the variant of the Heckler & Koch G36 rifle. The G36 are 5.56×45mm assault rifles, designed in the early 1990s by Heckler & Koch (H&K) in Germany as a replacement for the 7.62mm G3 battle rifle. It was accepted into service with the Bundeswehr in 1997, replacing the G3. The G36 is gas-operated and feeds from a 30-round detachable box magazine or 100-round C-Mag drum magazine.

It was developed for special tactical applications by police and military special forces. 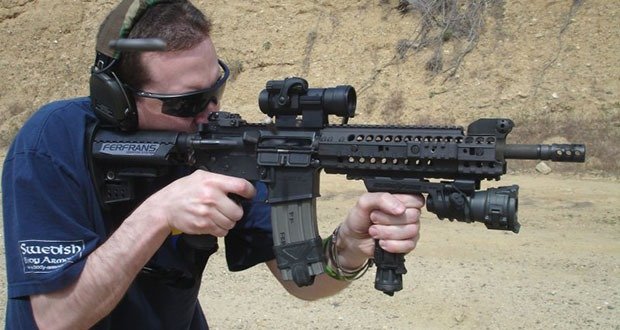 The SOAR is a selective-fire 5.56×45mm NATO assault rifle firing from either a closed rotating bolt (direct impingement) for the standard SOAR model or in a short-stroke piston rotating bolt for the SOAR-P variant.

It differs from the typical M4 due to FERFRANS’ preference for better control on full-automatic mode. Among the features include a patented Delayed Sear Activation System that reduces its cyclic rate of fire in full-auto to just around 550 to 680 rpm, reducing muzzle climb and improving control-ability. It also uses a heavy machine gun barrel for increased reliability in sustained firing, rifled in either 1:7 or 1:9 right-hand twist. 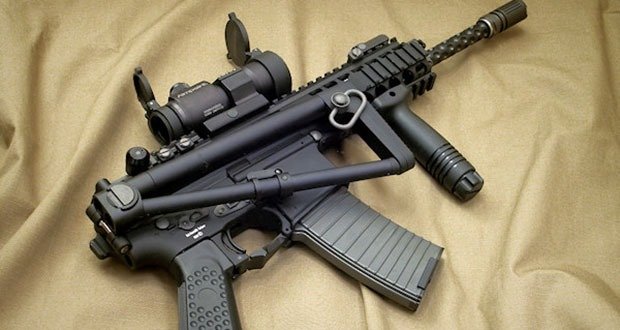 As with all personal defense weapons, the KAC PDW is intended to be compact and lightweight (similar to submachine guns), but have a longer useful range (out to the low end of combat rifle ranges, 250–300 m).

The KAC PDW combines new and off the shelf components in its design. The lower receiver, holding the magazine and trigger assembly, is essentially a shortened M16 rifle lower receiver, which makes the basic operating controls familiar to many potential users.

The cartridge, upper receiver, and operating mechanism are all new designs by KAC.

The KAC PDW uses a completely side-folding stock, unlike the M16 and M4 designs which have their main operating spring in a tube in the stock, and therefore can only partially telescope, and not fold sideways at all.

The KAC PDW is over 10 inches shorter (19.5″ vs. 29.8″ with stocks folded) and more than 1 pound lighter (4.5 lb vs. 6.3 lb) than the currently serviced M4 carbine, a carbine in service with every branch of the US Military, and the barrel have been lightened with a new dimpling process.