On 29 May, 1953, Edmund Hillary and Tenzing Norgay became the first men to successfully summit Mount Everest. At the summit, they buried a cross and ate some candy before heading back down to rejoin their team and celebrate their success. The pair were hailed as international heroes, with Edmund Hillary being knighted for the accomplishment, and Tenzing Norgay receiving the George Medal, one of the highest honors one can receive from the British government. What the two accomplished was fantastic and impressive, and this post isn’t meant to disparage their achievement. 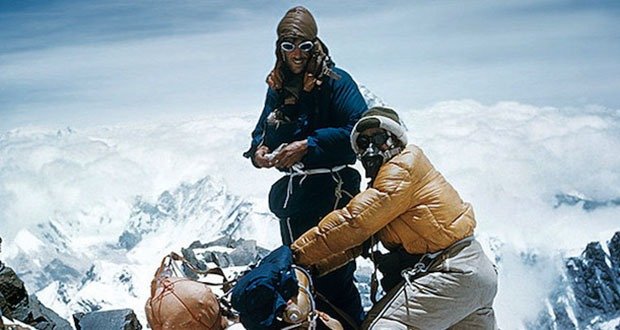 However, Hillary and Norgay were far from the first to try and summit Everest. Since the mountain was determined to be the highest in 1856, there had been a fascination with climbing it. After all, the allure of standing on the roof of the world is hardly something that can be easily denied. Various mountaineering and Alpine groups debated how it could be done, with an 1885 book concluding that it was entirely possible, albeit difficult. People were well aware of the dangers of snow, ice, crevasses, and altitude, and knew these would be worse on a mountain as high as Everest. 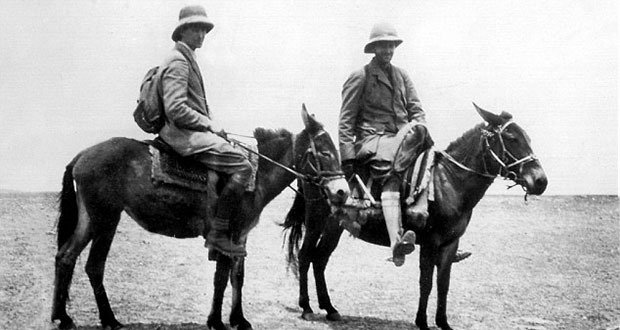 In 1921, George Mallory and Guy Bullock set off on a British expedition to survey the mountain, with Mallory becoming the first European to set foot on the mountain. They made it to just over 7000 meters (just under 23000 feet), but were unprepared to go further. However, on this expedition, the two climbers found what they thought might be a route to the top from the North Col, and made note of it for future expeditions. In 1922, Mallory tried this route again, once again making it no further than the North Col before being forced to turn back. This time, however, he got caught in an avalanche, losing seven porters, and nearly dying himself. 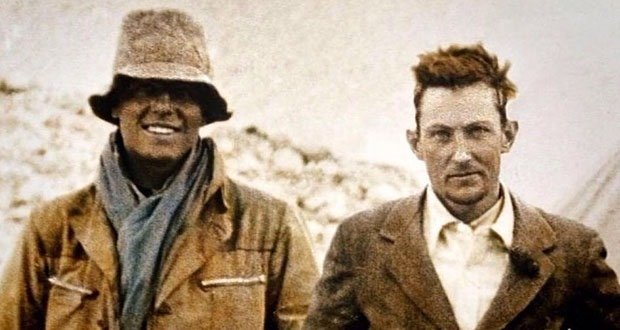 All of this brings us to the 1924 Expedition. This was, once again, a British undertaking, and once again, Mallory was set to try for the summit, this time with Andrew Irvine at his side. Irvine lacked Mallory’s Himalayan and high altitude experience, but Mallory still sang his praises, claiming he “could be relied on for anything except perhaps conversation.” In addition, Irvine made major improvements to the equipment, making it lighter and easier to work with, meaning he was more familiar with the oxygen than anyone else Mallory could have chosen to work with. The two set off for the summit on 8 June, 1924, having had a relatively smooth climb up to that point.

A third, supporting member of the group, Noel Odell, watched the pair leaving their camp from 26,800 ft (8168 m and less than 1000 feet from the summit), headed up the Three Steps (a series of overhangs and ridges) that would lead them to the summit. This is the last time anyone saw them alive, and what happens from there, is mostly guesswork. However, there are a few key pieces of evidence that help solve the mystery of what happened to Mallory and Irvine. 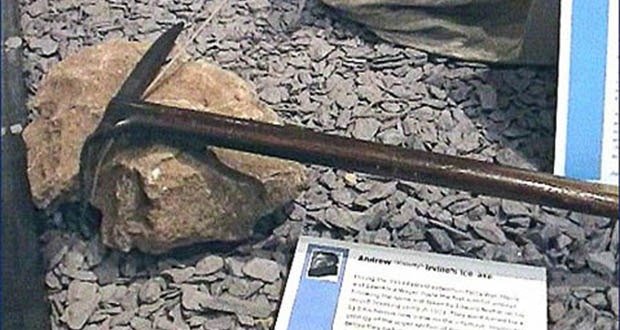 In 1933, another British expedition found an ice axe buried in snow and gravel 250 yards east of the Steps, a significant distance. Because the 1933 expedition was the first expedition since 1924 to make it to that altitude, it must have belonged to either Irvine or Mallory, and indeed, later testing and scouring of diaries and equipment logs showed that it was probably Irvine’s axe. Why an ice axe – an invaluable piece of equipment – was left behind a decent distance from where it was expected to be is anyone’s guess. Some say it’s evidence that Irvine and Mallory fell at that point. Others suggest they intended to come back down for it.

In 1960, a Chinese climber found what he described as a body sitting upright in the shelter of a rock on the Northeast Ridge, the approach that Mallory and Irvine would have been using. Once again, very few European climbers would have used this route, largely because access to it had been closed in the 1950s by the Chinese government. Any European bodies at that altitude must have gotten there before that time. This body has not been rediscovered. 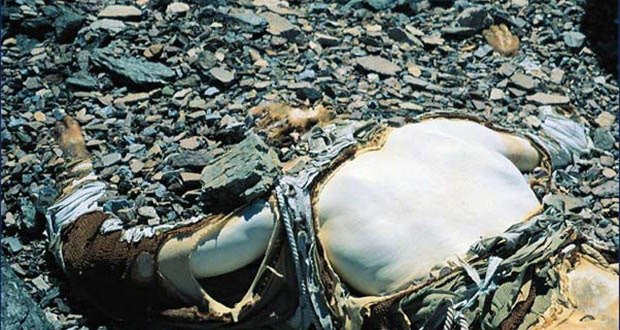 In 1975, another Chinese climber spotted a body that he described as “English dead,” with clothing that disintegrated when touched. This body was rediscovered in 1999, and determined to be the body of George Mallory. Irvine’s body has yet to be discovered. 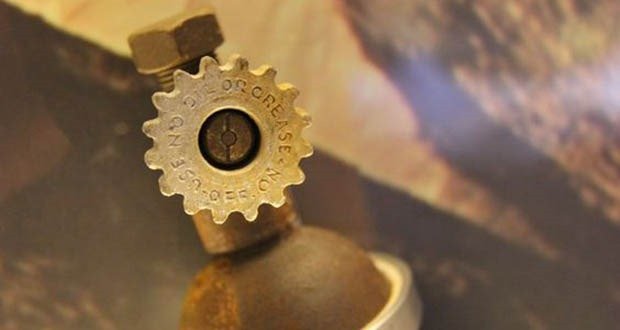 The 1999 expedition actually found several interesting clues, of which Mallory’s body was not the least. This expedition found Mallory and Irvine’s oxygen bottles along the First Step, along with evidence that they hadn’t been functioning properly. This suggests any number of terrifying possibilities, as oxygen is extremely important for climbers at high altitude. Without it, the two men would have been sluggish in their responses at best, and unable to function at worst. The possibility of injury when not using oxygen changes to the probability of injury.

Also interesting was the evidence of how Mallory died. Severe rope jerk injuries show that he fell, but was caught, at least initially. What ultimately killed him, though, were the numerous other fall injuries he’d gotten, including head trauma. It’s absolutely clear that at some point, Mallory fell, and that caused his death. However, the injuries from the fall were not the only injuries he, or possibly Irvine, sustained. Blood on Mallory’s collar matched a pattern of blotting an injury rather than of bleeding freely, suggesting that one of the two men had been injured before the fall. How this influenced the climb, no one knows. 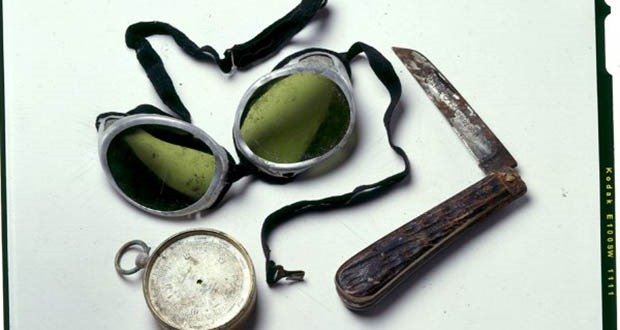 But what offers the most tantalizing clues about the climb are Mallory’s personal effects. He was found with most of what was expected – his watch, rope, goggles, and equipment lists. There was one thing that was missing, though, that has fueled speculation ever since. Mallory carried a picture of his wife up the mountain with him, promising her that if he reached the summit, he would leave it there, burying it under the snow so she could be there with him as well. That picture was not found with him. This doesn’t automatically mean that he buried it on the top of the mountain – perhaps at some point he took it out of his coat to look at it and it blew away or got lost? – but it is a tantalizing clue nonetheless. A morbid hint as to which possibility it might be is that Mallory’s body was found face down – it’s unlikely he fell in such a way that he would have taken the picture out to look at it as he died. He probably died on impact.

The only clue that would solve the mystery at this point would be to find Irvine, and find the camera that he carried with him. Irvine, however, has not yet been found despite several expeditions. It’s possible he will be, but as of today, he’s gone.

So what happened to Irvine and Mallory? Were they the first to conquer Everest? Did they get clumsy? Arrogant? As I said, this is a mystery that rages through the climbing community. Evidence that they made it past the Second Step is scant, but then, it’s also been more than eighty years. Everest preserves things, but snows can bury artifacts and bodies. A lack of evidence isn’t evidence in and of itself.

Hopefully, one day Irvine’s body will be found and the camera will show what happened. Until then, though, this is an incredible unresolved mystery.

25 Most Expensive Dishes and Drinks (Infographic)