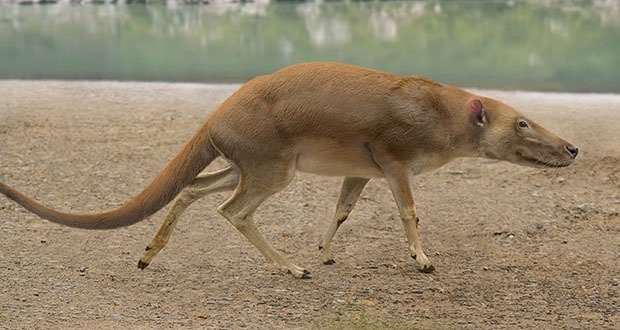 It’s rather odd to think that a small, terrestrial, even toed ungulate living in the Himalayan Mountains some 48 million years ago would be related to the giant, oceanic beasts that roam the seas today. However, paleontologists do think that this 2 foot long (60 cm) beast does have relation to whales due to its ear bones. The ear bones that it possessed bore striking resemblance to both modern whales as well as other well documented extinct whales, making Indohyus a possible “first whale”. 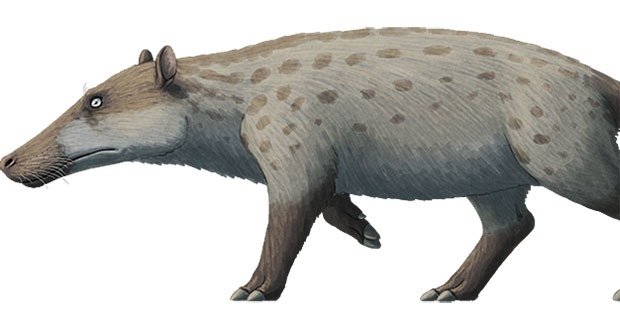 Pakicetids group of early whales that lived in the area of what would become northern India and Pakistan, and Icthyolestes was one of the first whales, living some 50 million years ago. Close examinations of the skull revealed that Icthyolestes had semicircular canals that were the same size as the whales’ closest relatives today, even toed ungulates (which include giraffes, pigs, and sheep). 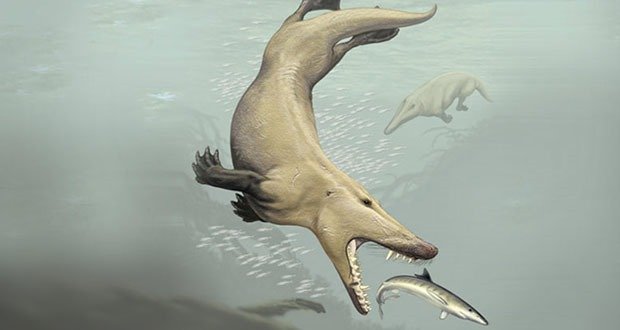 Along with other members of its family, the Ambulocetidae, Ambulocetus is labelled as a ‘transitional fossil’ as its body represents a point where whales started to move into waterways. Ambulocetus lived some 47 – 41 million years ago in Pakistan when it was a coastal region of India, and India itself was an island continent, much like Australia today. Unlike modern whales today, its hips were still attached to its spine, and it lacked a tail fluke. Its hips being attached to its spine allowed the animal to still traverse on land. However, in order to propel itself in the water, Ambulocetus had long, powerful hind limbs. Chemical analysis on Ambulocetus teeth suggest the animal hunted both in fresh and salt water. 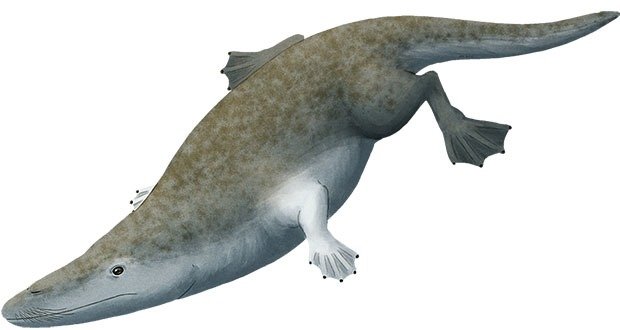 As whales began to transition more and more into aquatic environments, the process of fully transforming into fully aquatic animals began. Protocetids, the family of animals that Rodhocetus belonged to, were key in proving that whales were related to even toed ungulates, and that they were not related to the extinct wolf like animals known as mesonychids. It was within Rodhocetus’ heels where a “double pulley” structure was found, which was characteristic of even toed ungulates. 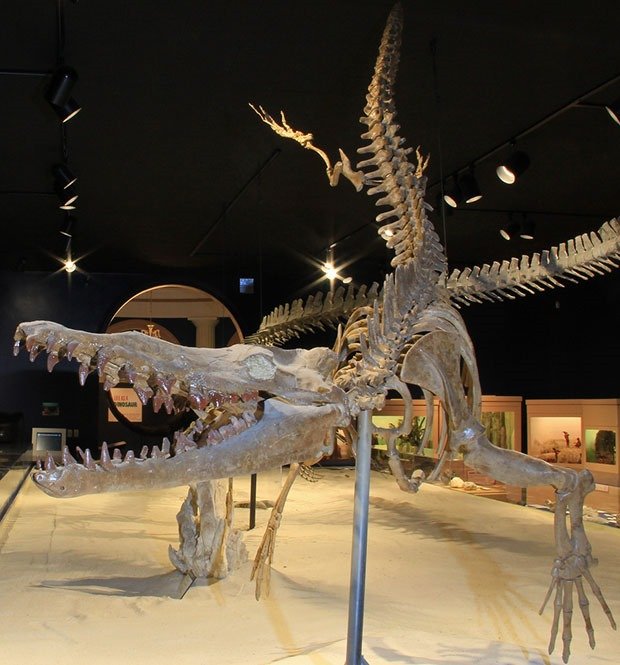 Found in the state of Georgia, Alabama, and Mississippi, Georgiacetus is suggested by some to be the common ancestor of all whales that came after it, including the ones that we have today. This 4.5m long (14′9″) hunter prowled the seas of the early eastern American seaboard. Although it had hind legs, it was not able to walk like its ambulocetid ancestors. Its hips were not attached to its spine, making it unable to support its body, though its hind limbs were still well developed and aided it in swimming. 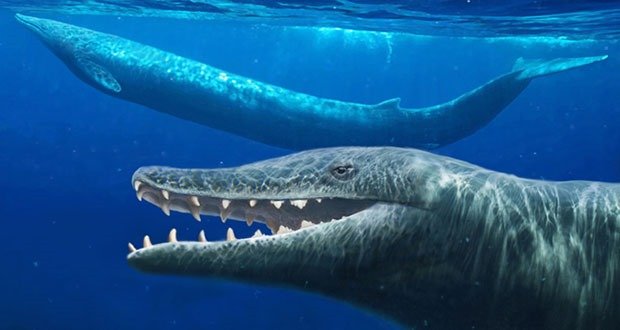 The largest fossil whale on record, Basilosaurus is truly the king of fossil whales. Living some 40 – 34 million years ago in the United States, Jordan, and Egypt this 20 meter long (65’7″) apex predator roamed the seas unchallenged, hunting fish, sharks, and other early whales. The first fossils discovered of Basilosaurus were mistaken for that of a reptile, hence the “-saurus” suffix, and it was reasonable to think that Basilosaurus was a reptile; it was built more like the mosasaurs that hunted the seas a mere 25 million years before it existed.

It is also thought that Basilosaurus had some of the most damaging, bone crushing bites that mammals could ever possess, with crushed juvenile Dorudon whale bones having been found in Egypt with the only culprit in the area being Basilosaurus itself. 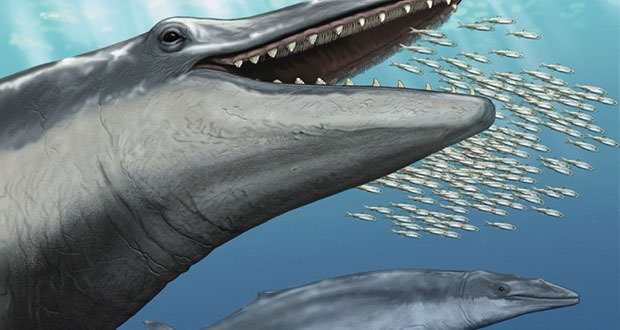 Aetiocetus belonged to the family known as the mysticetes, a group of whales that include the gentle baleen possessing giants that we have today. It had characteristics of both toothed whales as well as baleen, suggesting that this 6 meter (19’8″) long beast was a transition from toothed ancestry to baleen progeny.

One of the first mysticetes to possess toothless mouths, Eomysticetus lived some 28 to 23 million years ago in the Southeastern United States. The 7 meter long (23 ft) animal may have had baleen in its mouth, but other parts of its body plan were still primitive. Its blowhole was in front of its eyes, partway down its snout, and its fins and vertebrae resembled that of its basilosaur anscestors. 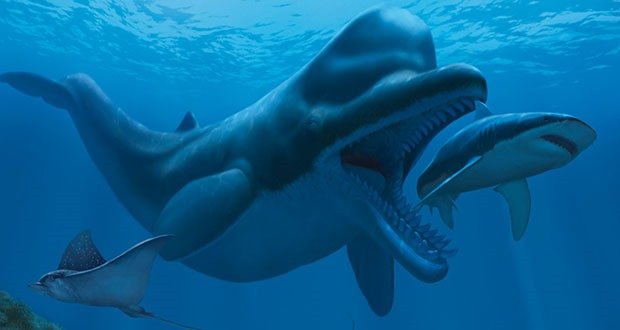 Though sperm whales today are now only represented by three dwindling species, some 23 million years ago they were a diverse group of apex predators and among these was Zygophyseter. This animal is known colloquially as the “killer sperm whale”, as it had teeth both on its upper and lower jaw, as opposed to sperm whales having only teeth on the lower jaw. At 7 meters long (23 ft), it may have had a lifestyle similar to that of today’s orcas, hunting large prey such as other primitive whales. Unlike sperm whales today, its jaws extended from its melon like head, giving it a more dolphin like appearance. 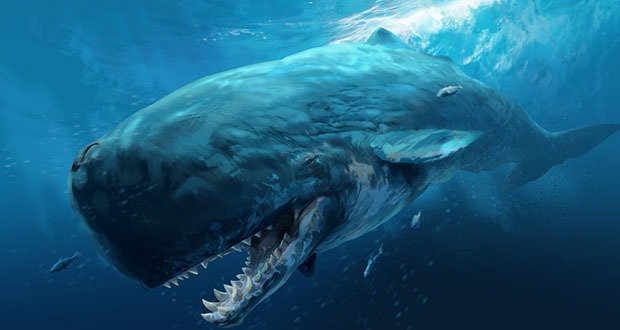 At the size of a modern sperm whale (13.5 to 17.5 meters), Livyatan is one of the larger ancient whales. Like Zygophyseter, it had teeth both in the upper jaw and the lower jaw, allowing it to hunt large prey, such as juvenile C. megalodon, which it shared the waters with. The teeth of L. melvillei grew even larger than C. megalodon, with the whale’s teeth growing up to a massive 36 cm (1.18 foot). Alongside C. megalodon, other animals that may have fallen prey to L. melvillei would have been other whales, dolphins, porpoises, sharks, sea turtles, seals and sea birds.