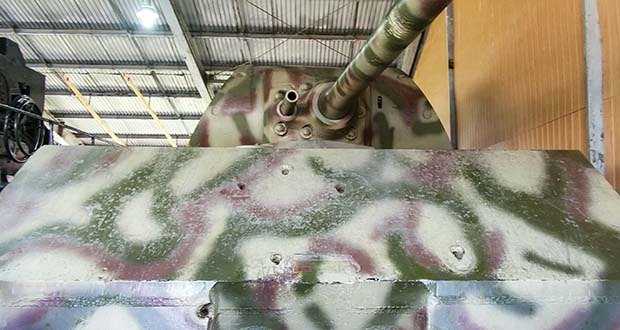 A famous one to start with. 188 tons of Nazi stupidity, the super-heavy tank Maus was the pet project of Ferdinand Porsche, who should have stuck to sports cars. Work was to be split by Krupp and Alkett, however, an Allied air raid on the factory pushed back production. The two completed – though partially wrecked – prototypes were captured by the Soviets in 1945, and the vehicle in this picture is assembled from the pieces. 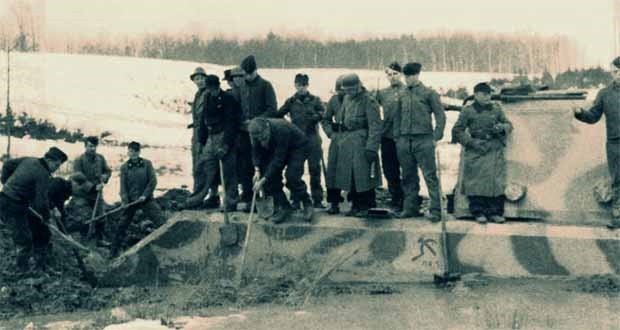 There was some pretty impressive engineering in Maus. For instance, the electric transmission for a vehicle this size was a decent effort for the time period. The vehicle in this picture, for instance, managed to de trench itself after being dug out. Most other tanks of the time would likely have required a tow vehicle. The 55-ton turret could be traversed at 8 degrees/sec – slow, but faster than other contemporary German designs.

The main armament was a variant of the 128mm Pak 44 anti-tank gun. Secondary armament consisted of a co-axial 75mm gun and a 7.92mm MG34 and a 100 mm grenade launcher to deal with infantry. In addition, the crew had three pistol-ports through which personal weapons could be fired to defend the tank. Plans to mount a rear-firing flamethrower and a vertically-mounted 20 mm cannon to attack any aircraft that flew directly overhead were not implemented by war’s end.

Yes, undoubtedly so. It had no strategic mobility, was a waste of scarce resources, expensive, difficult to maintain, and so few would have been able to be built that even if it wasn’t all these things it would have had no impact on the outcome of the war. Worse, the Allies had guns, such as the Soviet BL-9, more than capable of destroying it, 220mm of armor or not.

To put things in perspective, in the same period the Germans were struggling to build two Maus prototypes, the USA was producing a new heavy bomber every hour. 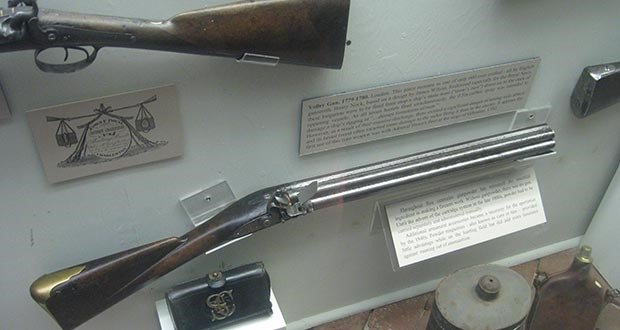 What is this, you might be asking? This, friends is a seven-barreled volley gun, designed in 1779 by a British engineer by the name of James Wilson and manufactured by Henry Nock of London. It was intended to be fired from the rigging of British warships down onto the decks of enemy vessels – the seven barrels would wreak havoc on tightly-packed groups of enemy sailors.

The way it worked was by welding seven barrels together. The central barrel had holes drilled through it to the surrounding barrels. When the trigger was pulled, this ignited the gunpowder in the pan, which then set off the charge in the central chamber, which then resulted in the other six barrels firing. 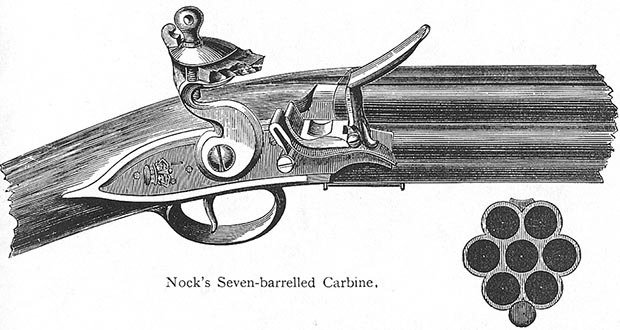 So why didn’t it work? Two Rs: recoil and reloading. Seven half-inch pistol balls produce a lot of recoils – even sailors who hauled ropes and cannon about all day found their shoulders broken by the force. Not good when you’re firing from a precarious “fighting top”; a wooden platform on a warship’s mast. Secondly, it took forever to reload. To put things in perspective, an infantryman of the era was considered good if he could fire three shots a minute from his weapon. Now image having to reload the Nock. Additionally, the thing produced a lot of sparks. Sailors were worried about setting linen sails on fire when firing from the rigging.

Well, yes and no. It was hopelessly impractical as a personal weapon, but it was a decent attempt at improving the concentration of fire for the era. Henry Nock was later famed for his excellent double-barreled shotguns, so presumably, he learned something from it. 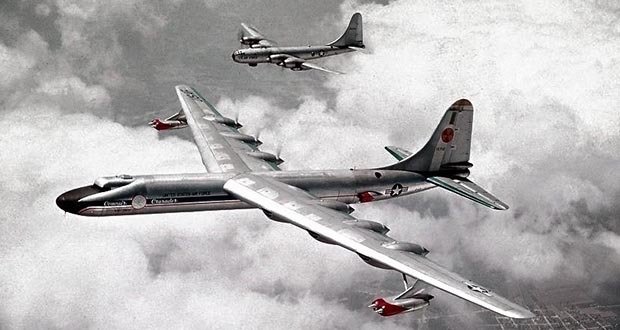 The theory is very nice: put a nuclear reactor in an aircraft, and theoretically, it can remain in flight for days or weeks. This was attractive to the USA and USSR during the Cold War; if an aircraft is already in the air, all you need to do if the sh*t hits the fan is radio it strike orders, rather than having to fuel and arm it and potentially get hit by an enemy first strike.

This is the US testbed, the Convair NB36H

This is the Russian effort, the Tupolev Tu-95LAL.

Neither the NB36H nor the LAL actually used their onboard reactors to power the aircraft, rather they were feasibility studies to see if the crew could be protected. The US designed an 11 ton specially shielded crew compartment, presumably the LAL had a similar system. 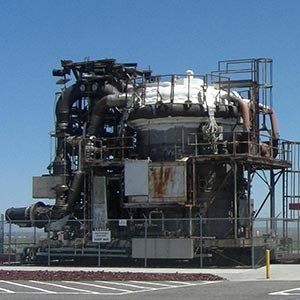 This is Heat Transfer Reactor Experiment-3, an experimental reactor intended to power the American WS-125 strategic bomber, which would have been the end result of the project.

After spending a lot of cash and wanting to go to the moon instead, JFK cancelled the American effort; the Soviets had given up by then. That is in addition to the massive safety concerns of airborne reactors. 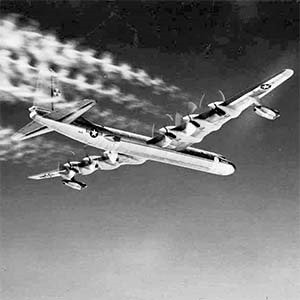 The idea was certainly worth pursuing given the theoretical advantages. Spending $1bn on it in 1960s money though? Cray-cray. 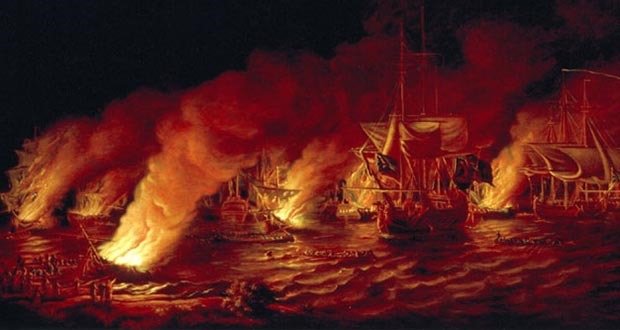 An idea as old as naval war – still a crazy one though.

Fireships are exactly what they sound like: take a bunch of old or damaged ships, load them up with kindling, pitch, tar, or any other flammable substances, and send them towards the enemy. 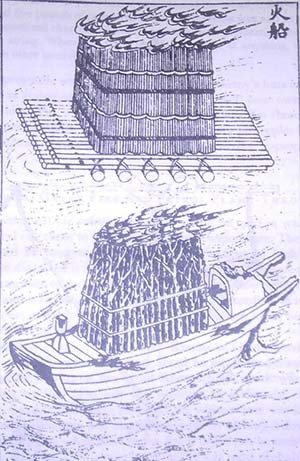 This is a Chinese Song dynasty fireship design – which shows the brutal simplicity of the concept. However, there were some refined versions. During the Siege of Antwerp in the Eighty Years’ War, the Dutch created “hellburners” – fireships stuffed with giant explosive charges, which inflicted catastrophic damage on the Spanish fleet.

By far the most famous use of fireships was during the Battle of Gravelines during the defeat of the Spanish Armada in 1588; a fireship attack led by Lord Howard and Sir Francis Drake. This led to the failure of the Armada, and their torturous voyage around Britain that left thousands dead. 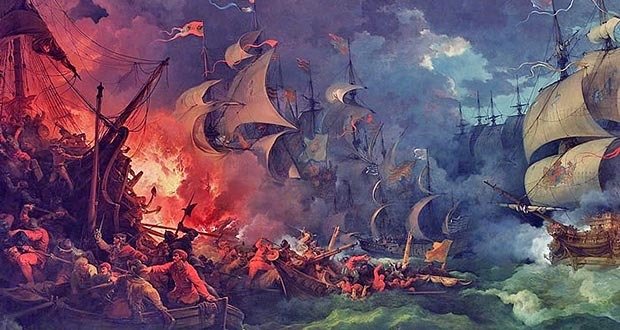 Yes. But unbelievably effective as a method of warfare for thousands of years. 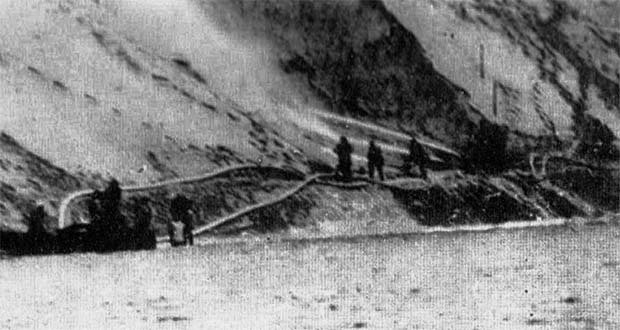 It’s 1973, and Israel’s neighbors would like a friendly chat. Or rather, they want to go to war. For Egypt, that presented a problem; Israel’s 1973 border with Egypt was the Suez Canal. The Israeli side was fortified by the Bar-Lev stop line: a giant complex of fortifications, the most impressive of which was a twenty-five-meter rampart of packed sand.

Israeli intelligence estimated that it would take the Egyptian Army 48 hours to breach it. It took them just 3.

Why? Water cannons. Prior to the war, the Egyptians had bought up a number of very high-pressure water pumps from England. When the time came for the Egyptian Army to assault the Bar-Lev line, Egyptian forces simply blasted the line with water cannons; the giant sand wall, which had been expected by the Israelis to be “a graveyard for Egyptian troops”, was washed away into the canal. 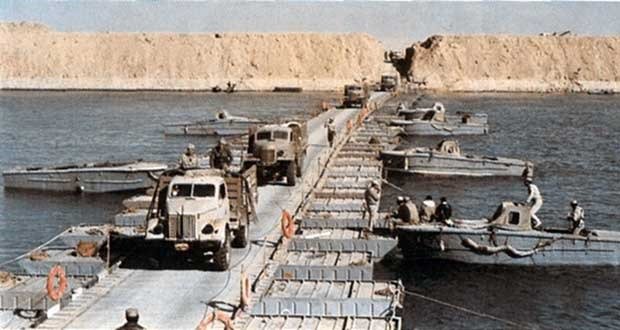 Combined with the strategic surprise achieved by the Egyptian Army, the crossing led to a sweeping Arab advance and a crisis in Israel. President Golda Meir ordered the Israeli Air Force to assemble its nuclear weapons in preparation for an escalation, which led the USA to step in and replace Israel’s losses with a massive airlift effort called Operation Nickel Grass, which eventually turned the tide back in Israel’s favor. 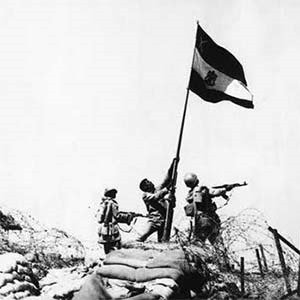 Oh yeah. But it was a very smart solution to a difficult problem, likely saved thousands of Egyptian soldiers’ lives, and remains a source of pride to Egyptians to this day.