Here is 20 Kickass and Amazing Landscapes on Earth – Part 2. For part 1, click here. 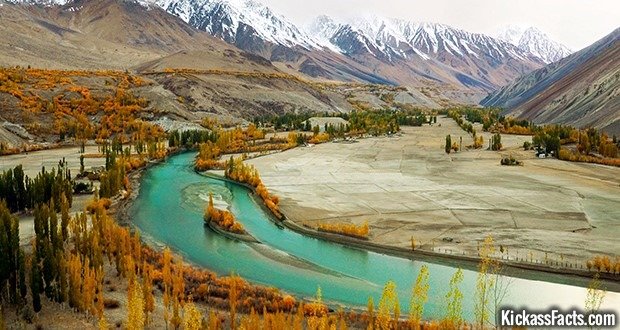 Image:Phandar Valley with the Ghizar River flowing through Northern Pakistan

Phandar Valley is situated 61 kilometers (38 miles) from the valley of Gupis, in District Ghizer of Gilgit-Baltistan, Pakistan. A twisting road passing through lush green fields and forests with a view of flowing river and icy peaks will lead you to this charming valley. From springs of crystal clear waters to lakes and rivers of deep blue water, there are all colors of nature’s beauty in Phandar Valley. The very first glance of this valley will eliminate all fatigue of journey and will reenergize you with its mesmerizing views. Peaceful deep blue waters of River Ghizer and surrounding lush green and golden fields are breathtaking.

Weather of Phandar valley stays very pleasant between June and July and this is the best time to visit this valley because the beauty of this valley goes at its peak during these months. Days are fair and warm and nights are a little cold. 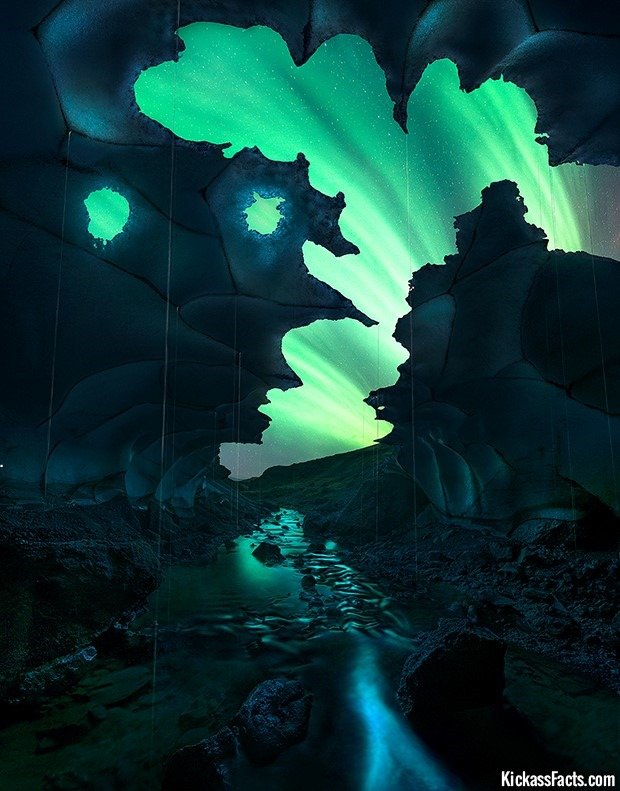 The jewel-like interior of an ice cave beckons adventurers on Iceland’s Vatnajökull glacier. The glacier was the site of a volcanic eruption in November 1996 that melted billions of gallons of ice and triggered a flood that lasted two days. The floodplain was littered with huge blocks of ice.

Due to increased hours of daylight and higher air temperature, ice caves in the outlet glaciers of Vatnajökull have become less stable and more dangerous to visit. It is important that people take the utmost care all the time when near an ice cave and that they evaluate its condition prior to entering. 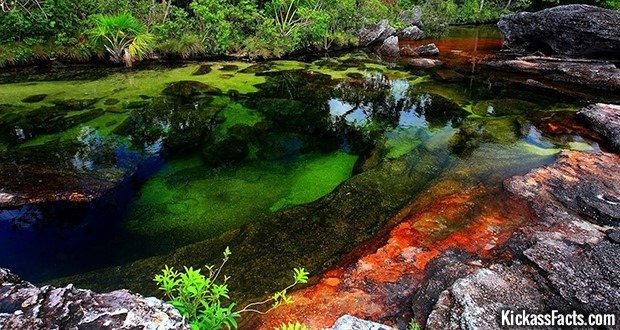 A unique biological wonder, Caño Cristales has been referred as the “river of five colors,” “the river that ran away from paradise,” and “the most beautiful river in the world.” For most of the year, Caño Cristales is indistinguishable from any other river: a bed of rocks covered in dull green mosses are visible below a cool, clear current.

However, for a brief period of time every year, the river blossoms in a vibrant explosion of colors. During the short span between the wet and dry seasons, when the water level is just right, a unique species of plant that lines the river floor called Macarenia clavigera turns a brilliant red. It is offset by splotches of yellow and green sand, blue water, and a thousand shades in between.

This only happens for a brief period in between seasons. During Colombia’s wet season, the water flows too fast and deep, obscuring the bottom of the river and denying the Macarenia clavigera the sun that it needs to turn red. During the dry season there is not enough water to support the dazzling array of life in the river. But for a few weeks from September through November, the river transforms into a veritable living rainbow. 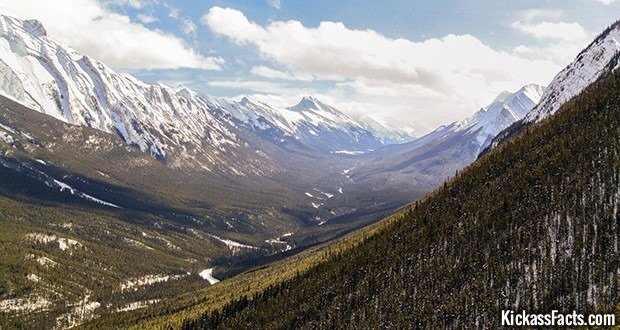 Nestled amongst the peaks of the Canadian Rockies, Banff is known as a traveler’s mecca for good reason. Whether by car, bicycle, hiking boots, skis, snowshoes or canoe, in Banff National Park you can enjoy year-round discovery of the 6,641 km2 mountainous landscape. As the first national park established in Canada and a coveted UNESCO World Heritage Site, what makes Banff National Park so special is its combination of vast unspoiled wilderness, mountain lakes like Lake Louise, and the gateway to it all: the Town of Banff.

Whether you’re on a camper’s budget or living it up in luxury, Banff offers a choice of accommodation, restaurants, boutique shops and activities to make your trip a memorable one. The history of this mountain town is also well preserved at a number of museums and heritage sites, while new memories are created throughout the year at world-class festivals and events.

The allure of Banff is also its close proximity to the park’s incredible attractions and best-kept wilderness secrets. With 1600 kilometres of trails, two gondolas, three ski areas, an exciting heritage and more dining options and activities than you have time for, Banff National Park is a premier destination for authentic hospitality and outdoor exploration. 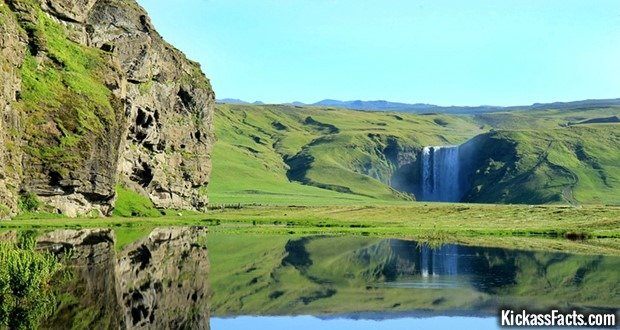 Only a few kilometers away from the south shores of Iceland, lies the village of Skógar along the Southern Ring Road. It is a popular summer-resort centre surrounded by unusual scenic beauty. The breath-taking view of Skogáfoss waterfall and scenic surroundings and the snow-capped heights of two towering glaciers are Skógar’s major summer attractions. There are two settlements by this name. One is Ytri-Skógar (outer or western Skógar) and the other Eystri-Skógar (eastern Skógar), located at a short distance from each other. Ytri-Skógar, commonly referred to as Skógar, is the main settlement. It is an old farm and has a church from 1890. It is located between the Skógá and Kverná rivers.

The greatest attraction of Skógar is of course the beautiful 60-metre high Skogáfoss waterfall in the river Skógá. Like the legends of buried treasures of Egill Skallagrímsson in Mosfell near Reykjavík and Ketilbjörn in Mosfell near Skálholt, there is a similar legend about the settler Þrasi who is believed to have buried his chest of gold under the Skogáfoss waterfall.

If the sun conditions are favourable – one can see a vivid rainbow in front of the waterfalls. The river below the falls holds a large salmon and char population and fisherman are seen here fishing July – October. The path leading to the top of the waterfalls continues following the river upstream – where numerous more dramatic waterfalls of sheer beauty are to be found. A great hike – to say the least!

Here is another image of the Skógafoss waterfall amidst a landscape covered in ash spewed from the volcano Eyjafjallajökull in 2010. 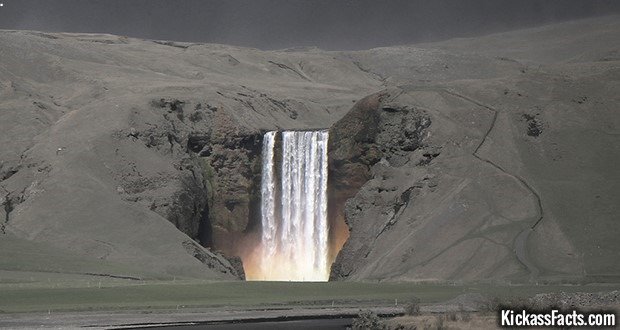 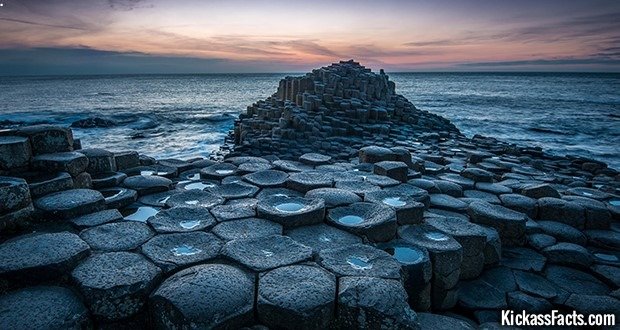 Image: The Giant’s Causeway, an area of about 40,000 interlocking basalt columns on the northeast coast of Northern Ireland by Greg Sinclair

The Giant’s Causeway lies at the foot of the basalt cliffs along the sea coast on the edge of the Antrim plateau in Northern Ireland. It is made up of some 40,000 massive black basalt columns sticking out of the sea. The dramatic sight has inspired legends of giants striding over the sea to Scotland. Geological studies of these formations over the last 300 years have greatly contributed to the development of the earth sciences, and show that this striking landscape was caused by volcanic activity during the Tertiary, some 50–60 million years ago. 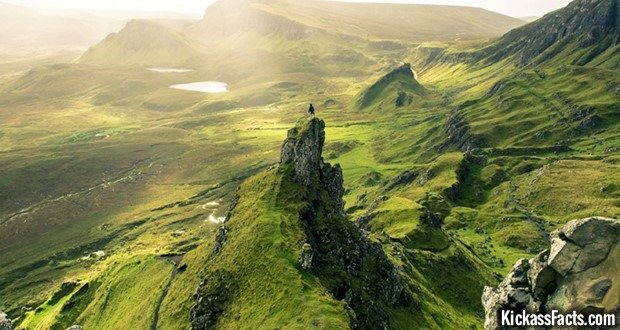 If you are fit enough to walk the narrow path and scramble up and down the steep slopes – you must visit Quiraing in Skye. Go on a bright and clear day for views of the Outer Hebrides and the Scottish mainland, framed by the pinnacles, cliffs and great buttresses. Go on a wet and windy day to feel your spine tingle as the clouds and mist swirl around you in this unreal and menacing landscape. Whatever the weather, you’ll not forget the experience.

The walk is under 5km return for the direct route, or about 7km if you make it a circuit and include the summit above the Quiraing itself. Either way, the starting point is from Bealach Ollasgairte at NG440679. Park at the bealach and follow the good, sign-posted path northwards from there. It will take you on a fairly level walk along the hillside, with good views to be had the whole way. There is a slightly awkward crossing of a burn, made worse if it happens to be frozen. Other than that it is entirely straightforward. 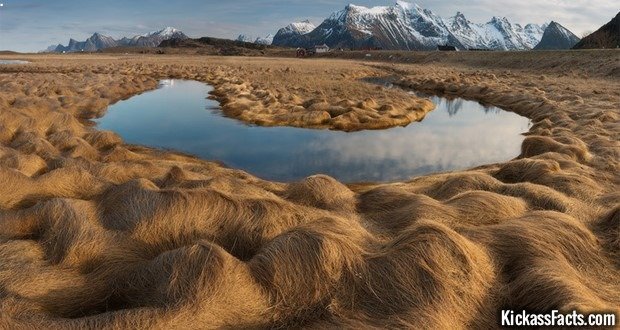 Image: The bizarre grass in Lofoten Islands in Norway by Daniel Korzhonov.

The Lofotens are a group of islands in the northern part of Norway. With their postcard-like fishing villages nestled in fjords, dotting a very rugged coast with abrupt peaks rising directly from the ocean, the archipelago is often described as one of the most scenic parts of Norway.

The archipelago is well above the arctic circle, and at the same latitude as Greenland or the northern parts of Alaska. However, it enjoys a relatively milder climate due to the circulation of the Gulf Stream, and temperatures up to 23C in the summer are not uncommon.

The winters are cold, but remains bearable, and at this extreme latitude (the same as northern Siberia and northern Alaska) winters ought to be very cold, but instead of 40 below, Lofoten temperatures hover around freezing in winter, and starts to climb in April.

The reason the grass is flat in the image above is because the snow has just recently melted (you can even see leftovers in the background). 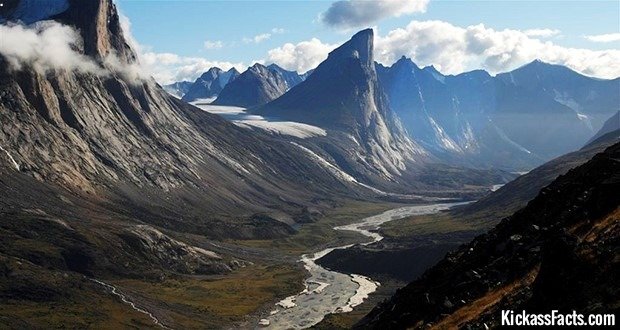 Mount Thor, officially called the Thor Peak, in Auyuittuq National Park, on Baffin Island, Nunavut, Canada, is a granite peak that features the world’s tallest purely vertical drop. The drop measures 1250m and angles inwards at 105 degrees making it more of an overhang. To put the height in context, the Eiffel Tower is 324m, the Empire State Building is 381m, the CN Tower is 553m, and the Burj Khalifa 828m.

Mount Thor is part of the Baffin Mountains which in turn form part of the Arctic Cordillera mountain range. The mountain is made of granite and is the most famous of Canada’s mountains named “Thor”. Despite the fact the mountain is in a remote area, it’s a popular destination for avid mountain climbers. Mount Thor was first climbed in 1965 during the Alpine Club of Canada by an expedition led by Pat Baird. In July 2006, the first successful longest rappel was set on Mount Thor by an American team. 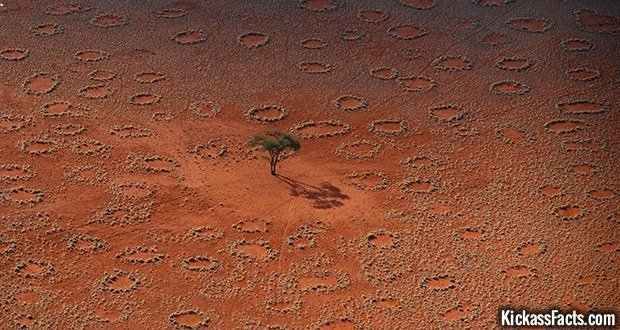 Fairy circles are circular barren patches of land, typically found in the grasslands of the western part of Southern Africa. They are most prolific in Namibia, but are also present in Angola and South Africa. Their diameters vary between 2 and 15 meters. Evidence suggests that the sand termite Psammotermes allocerus is responsible for their creation.