Since we have finished the Harry Potter backstory series, we are back to historical picture series. So here is the part 1 of 2 part series called Communist Soldiers Throughout History – A tale of the rise and fall of an ideology. Enjoy. 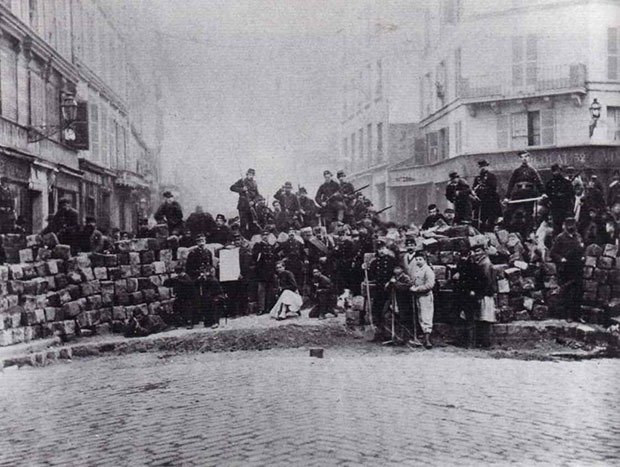 Communards in Paris block a street during the days of the Paris Commune. A revolutionary socialist government that ruled Paris from March to May 1871, the Commune was the result of decades of mistreatment of the poor of the city from the French government. The Commune was liquidated in seven days by the French Army in in “La semaine sanglante” – “The Bloody Week” – but the uprising inspired Communists and leftists the world over. 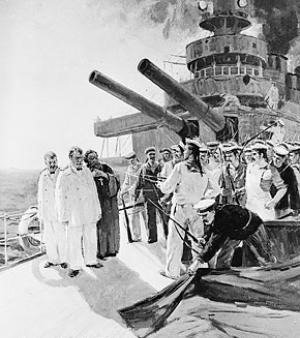 A painting of the mutiny aboard the Russian battleship “Potemkin”, when soldiers of the Russian Navy rebelled against their brutal officers during the 1905 Russian revolution, a two year wave of social unrest that paralyzed the Russian Empire. After leading the Russian Navy on an embarrassing ten-day chase around the Black Sea, the mutineers returned to Sevastopol and surrendered. 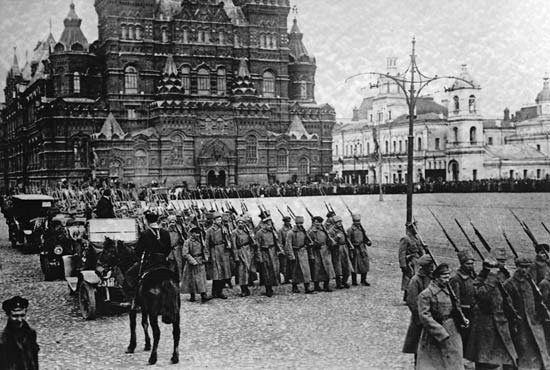 Bolshevik troops parade past St Basil’s cathedral in Red Square. Vladimir Lenin’s Bolsheviks seized power from the provisional government established following the February Revolution that same year. The Bolshevik revolution led to the five year Russian Civil War, and the establishment in 1922 of the Union of Soviet Socialist Republics. 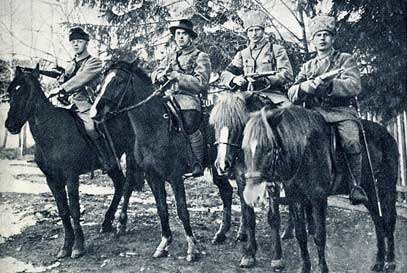 Red Cavalry of the Finnish communist forces during Finland’s Civil War. The Finnish government successfully resisted the Bolsheviks’ attempts to bring communism to Finland, though the scars of the civil war would take a long time to heal. Finland would again resist Soviet aggression in the Winter War. 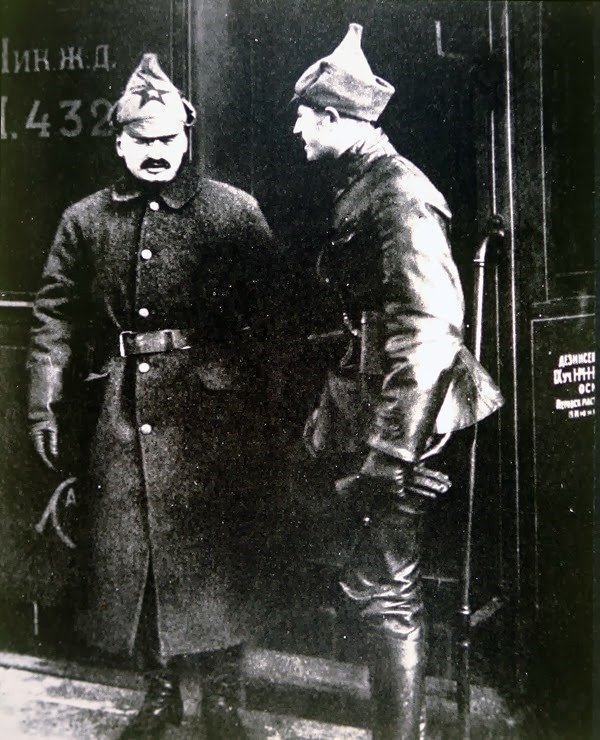 Leon Trotsky, head of the Revolutionary Military Soviet, steps from his armored train confers with one of his “Red Hundred”, the group of 100 bodyguards who accompanied him everywhere, complete with red leather uniforms. Trotsky proved to be an able military commander and led Bolsheviks to victory over their enemies to left and right during the five years of chaos that came in the aftermath of the October Revolution. 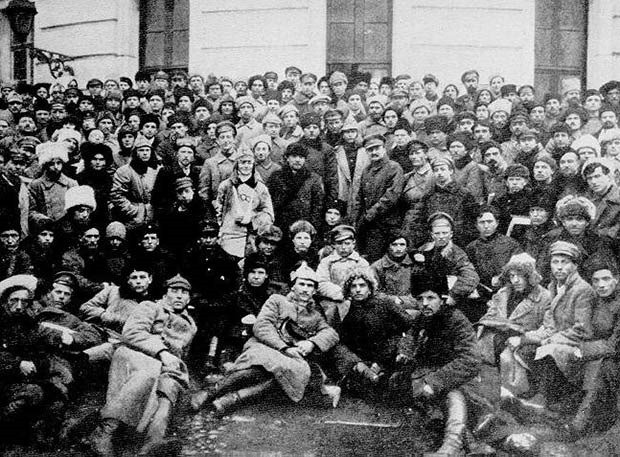 The Bolshevik’s military and civilian leadership pose in Moscow after the crushing of the Kronstadt mutiny, an anarchist uprising amongst the Russian fleet. Trotsky, Lenin, and Voroshilov are in the middle. The Bolsheviks had great success in reclaiming formerly Russian Central Asia and the Kavkaz, but had less success in conquering the former Russian Empire’s Western provinces. 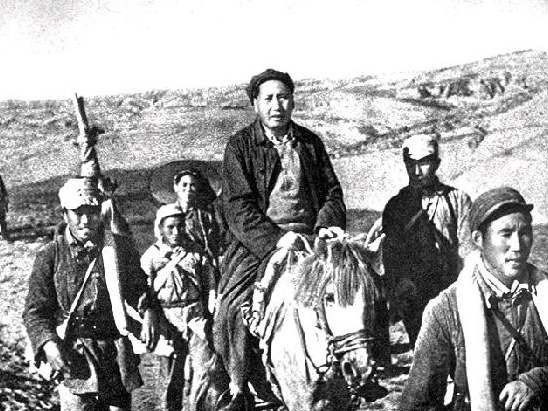 Mao Zedong during the Long March. Over the course of a year, the Chinese Red Army managed to evade the pursuing armies of Chiang Kai-Shek’s nationalist KMT and escape to Yan’an. The March brought Mao to power in the CCP and made him a legend worldwide helped by sympathetic Western journalists such as Edgar Snow. 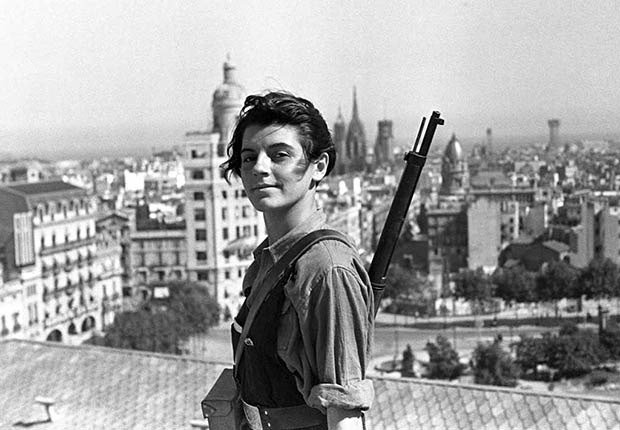 17 year-old Marina Ginestà poses on the roof of the Hotel Colón in Barcelona. Ginestà was a war correspondent and activist from France who served as a translator for the Soviet newspaper Pravda’s bureau in Spain. This was actually the only time she would have carried a gun. Nevertheless, her image is one of the most iconic of the Spanish War. 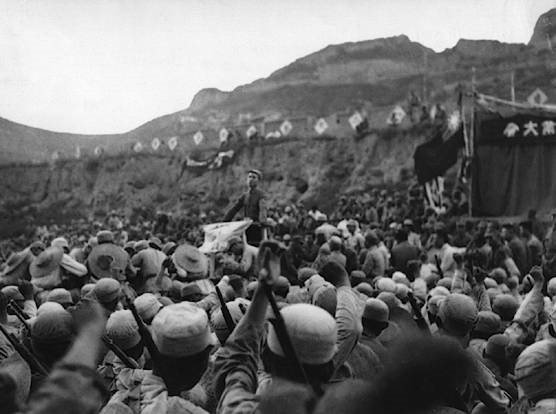 A communist speaker addresses the People’s Liberation Army at the conclusion of the Long March. After the Japanese invasion in 1936, the Communists and the nationalist KMT joined forces to liberate China, which is another way of saying that the KMT liberated China with American equipment whilst the CCP dealt opium and made precisely one offensive in 1940 to keep up appearances. 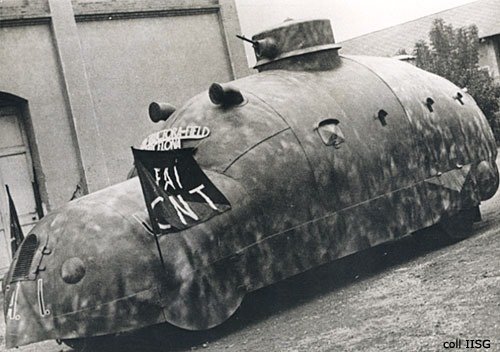 A makeshift armored car – “tiznao” – of the Spanish Republican forces, this one belonging to the anarcho-syndicalist CNT-FAI. Such makeshift vehicles were popular with both sides. The CNT-FAI was one of several factions on the government side, including the Trotskyist POUM, the Stalin-backed PCE, and their umbrella organization the Popular Front. Also involved were the People’s Front of Judea, the Judean People’s Front, the Judean Popular People’s Front, and the Campaign for a Free Galilee (SPLITTERS!). 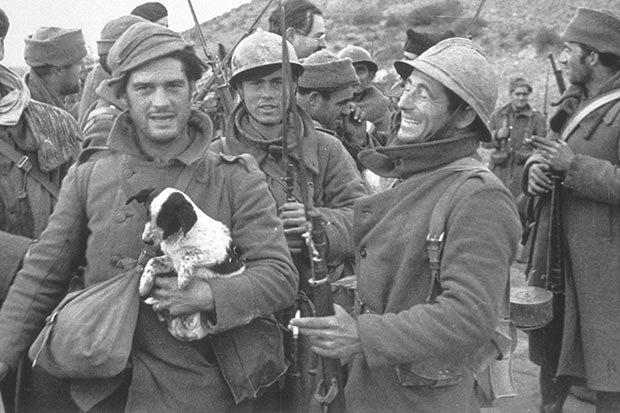 A Spanish Republican soldier clutches a puppy and laughs with his comrades. This soldier is often claimed to be George Orwell, but it isn’t. However, the tall, bespectacled and dark-haired figure behind him and to to right is Ernest Hemingway. 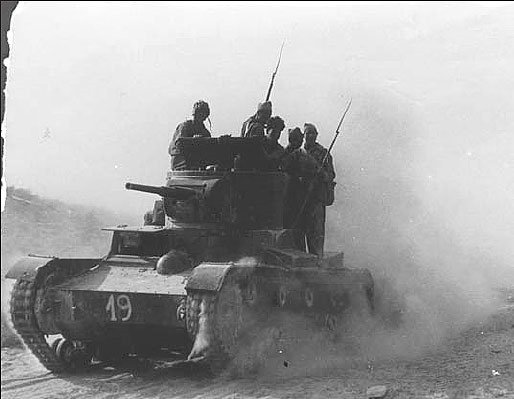 International brigadiers descent towards the front aboard a Soviet-supplied T-26 tank during the Battle of Belchite. International volunteers formed only a small part of the Republican Armies, however – the Spanish Civil War was primarily the Spaniards’ battle, and arguably the international brigades have received too much attention at their expense.