Here is the part 2 of three part series on the rise and fall of Communism. 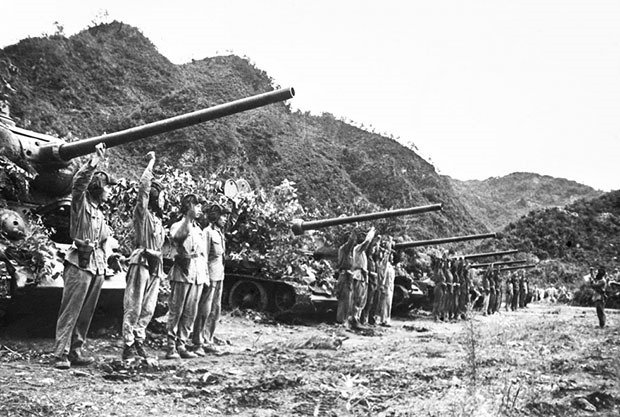 Chinese volunteers salute before their T-34/85 tanks during the Chinese intervention in the Korean War. Taking the UN forces by surprise in late 1950, the Chinese “People’s Volunteer Force” threw them into a headlong retreat, but proved less adept at a long war, and the front had stabilized into roughly the modern North-South Korean border by 1953. Officially, the Chinese were only volunteers, leading the British soldiers in Korea to quip that it was a very well-dressed volunteer who turns up wearing a tank. 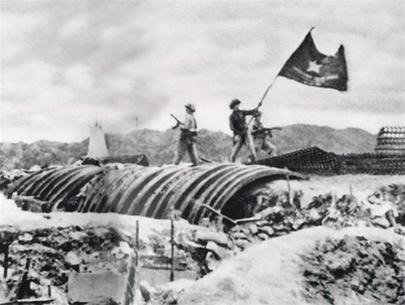 Communist Vietnamese soldiers raise the Red Star over the remains of the French fortress of Ðiện Biên Phủ. After a bitter month-long siege, Vo Nguyen Giap’s forces stormed the town in May 1954, taking over 10,000 prisoners. Giap’s victory set the stage for the conflict between North and South Vietnam that would soon spiral into the Vietnam War. 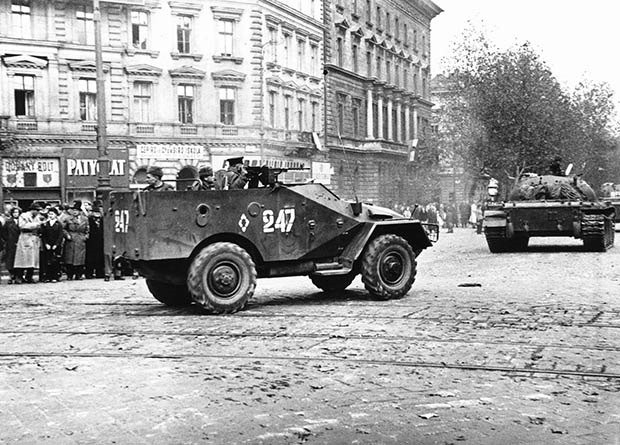 After student protests lead to a new and more liberal government being installed in Hungary, the Soviet Army invades to bring Hungary back into the Soviet sphere of influence. The Soviet forces are quickly successful – but the invasion costs the Soviets 722 dead as well as the sympathy of West European communist parties, most of whom would break from Moscow over the issue. 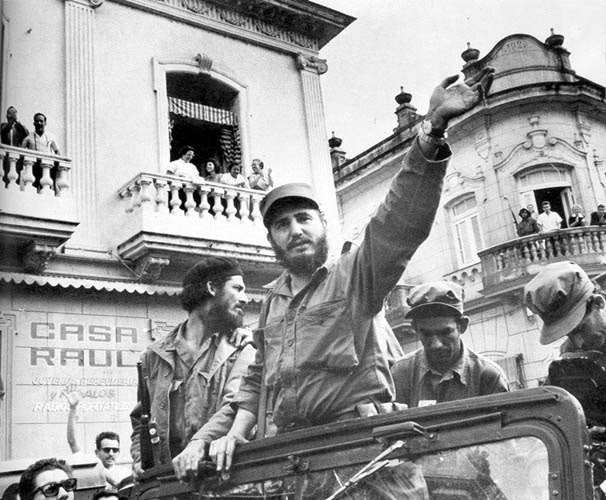 Fidel Castro enters Havana in triumph, after throwing out the corrupt and incompetent regime of Fulgencio Batista. Castro would replace Batista’s regime with his own Communist one, and who was worse really depends on one’s point of view. The US embargo placed on Cuba two years later following Castro’s nationalization of US-owned businesses persists to this day, although President Obama took some small steps towards loosening it in 2015. 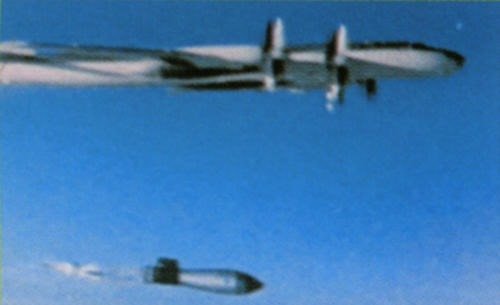 A Tupolev Tu-95 drops the AN602 hydrogen fusion bomb, known by it’s popular Western name, the Tsar Bomb. The AN602 was the most physically powerful device ever created by mankind – the 58 megaton blast was visible 1000km from ground zero. Third-degree burns were caused 62 miles away, windows were broken up to 500 miles away, and atmospheric focusing caused damage in Finland and Norway. The bomb’s airburst caused a 5.5 magnitude earthquake, had it been detonated on the ground the magnitude would have been 8.1. The seismic wave caused by the blast was measureable on its third passage around the earth. The bomb’s massive fireball was five miles in diameter. 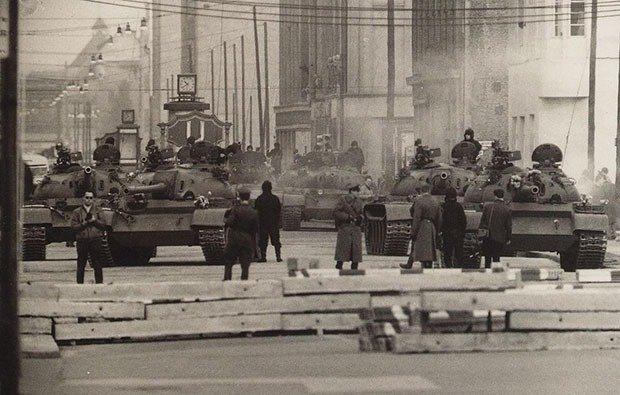 Soviet tanks stand-off against their American counterparts at Checkpoint Charlie in one of the tensest moments during the Cold War. The crisis was prompted by the Soviet ultimatum to the Allies to leave Berlin within six months. The Allies refused. The end of the crisis was brought by the construction of the Anti-Fascist Protection Rampart in the Soviet sector – or, as it was known to the world, the Berlin Wall. 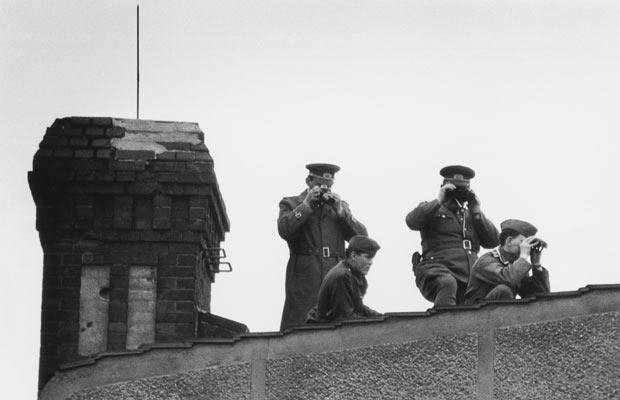 East German Border Guards spy on Queen Elizabeth II during her visit to the Berlin Wall. The Inner German Border was one of the deadliest and most heavily guarded in the world, with the elite East German “Grenzertruppen” being feted as heroes defending the GDR from “West German Nazism”. These heroes were never allowed to leave each others’ sight in case one defected to the “fascist West”. 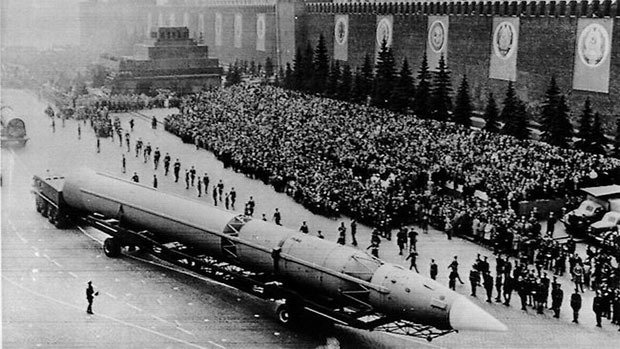 A Soviet ICBM is paraded through Red Square during the 1965 Victory Parade. The Soviet Strategic Rocket Forces were considered second only to the Ground Forces in Soviet budgeting. Only three years earlier, the deployment of Soviet missiles in Cuba had sparked the worst crisis of the Cold War. 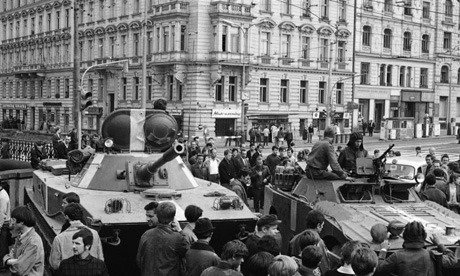 Soviet armored vehicles in Prague, during the Warsaw Pact invasion of that Czechoslovakia in 1968. After Czechoslovakian leader Alexander Dubcek attempted to introduce a more liberal “socialism with a human face”, the USSR after initially wavering took the decision to invade, prompted by the hardline KGB chairman Yuri Andropov, who gave the Politburo fabricated evidence that the Czechoslovaks were plotting with NATO. Andropov would later become leader of the USSR in 1982. 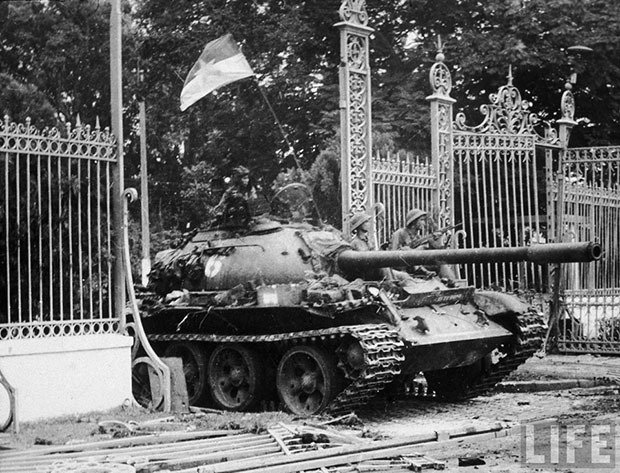 A tank of the People’s Army of Vietnam rumbles through the gates of the Independence Palace in Saigon, marking the total defeat of US-backed South Vietnamese and the reunification of the country. Prior to the Vietnamese arrival, the US Navy had evacuated over 7000 key American and South Vietnamese personnel – an impressive success in its own terms, but still a humiliating retreat before international TV cameras. 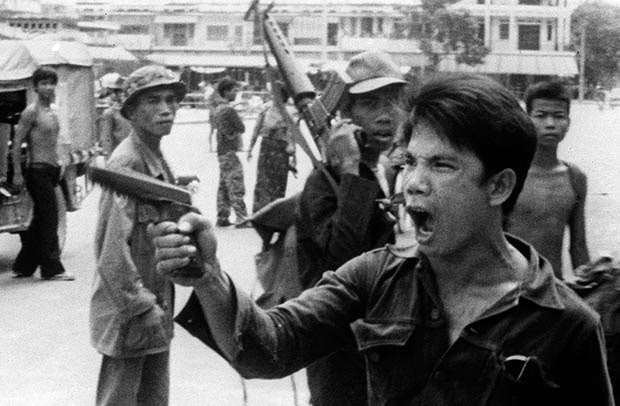 The Communist Party of Kampuchea, better known as the Khmer Rouge, arrive in Phnom Penh. In four years of chaotic rule, the Khmer Rouge would kill 2.2 million of their citizens in lunatic attempt to return Cambodia to an agrarian society. Their policy towards the urban population was summed up with the chilling maxim: “To keep you is no gain, to destroy you is no loss”. Within hours of their victory, the city was “evacuated” – every single resident of the city was ordered to leave for the country side, and its “Killing Fields”, where over a million would die. 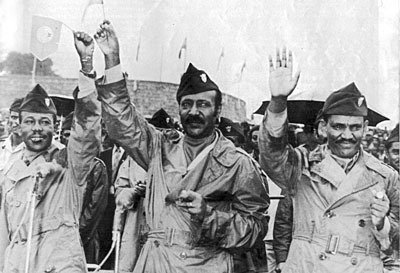 The Ethiopian Derg, a clique of military officers, seize power in Ethiopia in 1974, deposing Emperor Haile Selassie and thus pissing off Rastafarians everywhere. The Derg were backed by the Soviets, leading the US to back their rivals the Somalians and also the Eritrean independence movement. The escalation of tensions tis caused led to the failure of the SALT II arms limitation treaty – “buried in the sands of the Ogaden”.