Here is part 2 of 25 Interesting Facts About Fight Club. For part 1, click here. 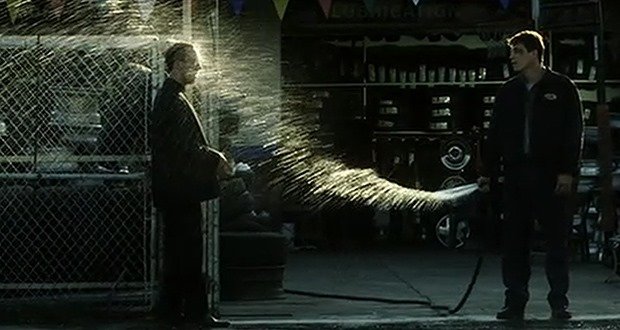 1. When a Fight Club member sprays the priest with a hose, the camera briefly shakes. This happens because the cameraman couldn’t keep himself from laughing.

2. Brad Pitt says he didn’t want his parents to see the movie, but he couldn’t convince them not to watch. They changed their minds after watching the chemical burn scene.

3. Author Chuck Palahniuk first came up with the idea for the novel after being beaten up on a camping trip when he complained to some nearby campers about the noise of their radio. When he returned to work, he was fascinated to find that nobody would mention or acknowledge his injuries, instead saying such commonplace things as “How was your weekend?” Palahniuk concluded that the reason people reacted this way was because if they asked him what had happened, a degree of personal interaction would be necessary, and his workmates simply didn’t care enough to connect with him on a personal level. It was his fascination with this societal ‘blocking’ which became the foundation for the novel.

4. When Tyler (Brad Pitt) catches The Narrator (Edward Norton) listening at the door as he has sex with Marla (Helena Bonham Carter), he is wearing a rubber glove. This was Brad Pitt’s idea, and caused a great deal of controversy with President of Production at Fox 2000 Pictures, Laura Ziskin. She was horrified when she saw the scene and demanded that it be removed. However at a subsequent test screening, the appearance of the glove got the biggest laugh of the whole movie, prompting Ziskin to change her mind.

5. To prepare for their roles, Edward Norton and Brad Pitt took basic lessons in boxing, taekwondo and grappling, and also studied hours of UFC programming. 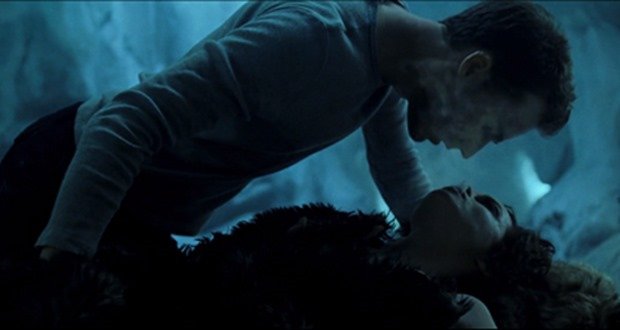 6. The visible breath in the cave scene is recycled Leonardo DiCaprio breath from Titanic (1997), which was composited into the shot.

7. Starbucks pulled their name from the coffee shop destruction scene. They didn’t mind the director placing their product throughout the film, but did not want their name to be destroyed in that scene. Therefore, the gold globe crashes into a shop named Gratifico Coffee.

8. Director David Fincher took 12 takes of the stuntman rolling down the stairs for the fight between The Narrator and Tyler at the end of the film. The take used in the movie is the very first one.

9. In the scene where Tyler is giving an inspirational speech to the Fight Club members, he says “We’ve all been raised on television to believe that one day we’d all be millionaires and movie gods and rock stars.” Right as he says “rock star,” he looks specifically at Jared Leto’s character. Jared Leto formed the band ’30 Seconds to Mars’ in 1998. Their last album went platinum.

10. The scene where The Narrator’s boss (Zach Grenier) finds the rules of Fight Club in the photocopier and The Narrator points out that whoever wrote it is obviously dangerous and might one day storm through the building shooting everyone, proved to be a highly controversial scene for the filmmakers. In early test screenings, the scene got huge laughs and scored extremely highly with audiences. However, these screenings happened before the Columbine massacre. In all screenings after Columbine, the scene evoked no laughter whatsoever and scored extremely poorly, with audiences commenting that they felt it was in bad taste. This prompted the studio to ask director David Fincher to cut the scene altogether. Fincher considered doing so, but because the scene leads into the pivotal Marla breast-cancer scene, he decided that it couldn’t be cut. 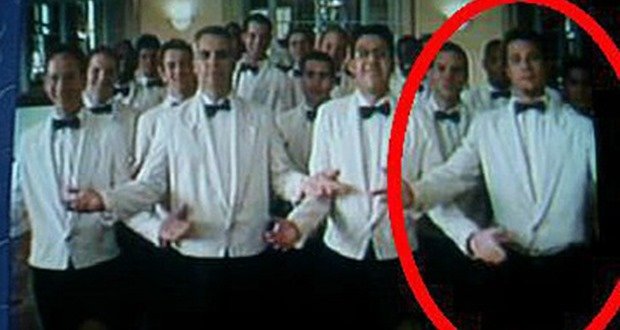 11. In the scene where the narrator is popping a mint into his mouth, a promotional video of the Bridgeworth Suites is playing on the television. You can see that one of the hotel employees in the commercial, is Brad Pitt. He is the one to the right of the TV screen.

12. During rehearsals, Brad Pitt and Edward Norton found out that they both hated the new Volkswagen Beetle with a passion, and for the scene where Tyler and The Narrator are hitting cars with baseball bats, Pitt and Norton insisted that one of the cars be a Beetle. As Norton explains on the DVD commentary, he hates the car because the Beetle was one of the primary symbols of 60s youth culture and freedom. However, the youth of the 60s had become the corporate bosses of the 90s, and had repackaged the symbol of their own youth, selling it to the youth of another generation as if it didn’t mean anything. Both Norton and Pitt felt that this kind of corporate selling out was exactly what the film was railing against, hence the inclusion of the car; “It’s a perfect example of the Baby Boomer generation marketing its youth culture to us. As if our happiness is going to come by buying the symbol of their youth movement, even with the little flower holder in the plastic molding. It’s appalling to me. I hate it.” However, Pitt is quoted on the DVD commentary as saying he has since had a change of heart about the new Beetle.

13. Director David Fincher initially wanted to include a single frame flash of Tyler Durden (Brad Pitt) during the 20th Century Fox logo, but the studio’s legal department wouldn’t clear him to do so. He then tried to include the image during the Regency Enterprises logo, but Arnon Milchan (President of Regency) also wouldn’t allow him.

14. To ensure that Bob’s (Meat Loaf) breasts and love handles hung correctly, his fat suit was filled with birdseed, so that it would ‘spill’ over his pants and give the impression of sagging flesh. Altogether, the suit plus the seed weighed over one hundred pounds.

15. According to author Chuck Palahniuk, much of the specific content of the novel (such as splicing single frames of pornography into family films, attending support groups for the terminally ill, erasing video tapes etc) came from stories told him by friends, and from things his friends actually did. Whilst writing the novel, Palahniuk also interviewed numerous young white males in white-collar jobs, discovering that “the longing for fathers was a theme I heard a lot about. The resentment of lifestyle standards imposed by advertising was another.” 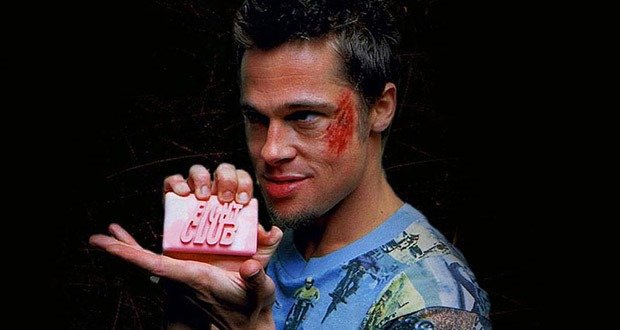 16. Brad Pitt and Edward Norton both really learned how to make soap.

17. The sex scene between Tyler (Brad Pitt) and Marla (Helena Bonham Carter) was shot using the same ‘bullet-time’ technique used in The Matrix (1999); stills cameras were set up in a circle around the bed, and each one would take a single shot in sequence. These single frames were then edited together and enhanced with CG, as both Pitt and Bonham Carter were fully clothed in motion capture suits during the shoot.

19. Edward Norton lost 17-20 pounds for this role after having to beef up tremendously for his role as a Neo-Nazi skinhead in American History X (1998). Norton achieved this form by running, taking vitamins and just ignoring the on-set catering.

20. Director David Fincher shot 38 takes of the scene between Tyler Durden (Brad Pitt) and The Narrator (Edward Norton) in Lou’s Bar after The Narrator’s apartment has blown up. Each take was filmed with two cameras, and for every individual take, Fincher would give the actors a rough idea of what to do, and they would improvise most of the dialogue. The scene as it exists in the finished film is made up of segments from numerous different takes and much of the dialogue, especially Tyler’s dialogue, was completely ad-libbed on set.

21. Tyler appears in the film at least 4 times before Jack sees him briefly on the moving walkway at the airport.

22. During the shooting of the night exteriors of Tyler’s house in San Pedro, the helium balloon lights which were floated above the house by director of photography Jeff Cronenweth prompted a number of UFO sightings, resulting in the Lomita Sheriff’s Department visiting the set to inquire what was going on.

23. Much confusion exists amongst fans about the Narrator’s name. Many believe it is Jack due to his use of the phrase “I am Jack’s…”, but others argue that he only uses the moniker Jack because that was the one he saw in “Annotated Reader”. Interestingly, in the press packages released for the movie, which came in the form of an Ikea-esque catalog, the character is referred to as Jack, as he is on the back of the DVD, and in the booklet accompanying the DVD, where the Chapter list is referred to as “Jack’s Chapters”. Also, the original screenplay by Jim Uhls refers to him as Jack. On the other hand, in the closed captions for the film, he is referred to as Rupert. Edward Norton reveals that he refers to the character as Jack on the audio commentary on the DVD and Blu-ray.

24. Following Fight Club’s release, several fight clubs were reported to have started in the United States. A “Gentleman’s Fight Club” was started in Menlo Park, California in 2000 and had members mostly from the high tech industry.

25. Bob wears a shirt during his fights, despite one of the eight rules being you are not allowed to wear shirts or shoes during fights. This was because Meat Loaf’s fat suit had to be covered during these scenes.