Here is part 2 of 25 Interesting Space Images. If you missed part 1 of this segment, here is the link to it. 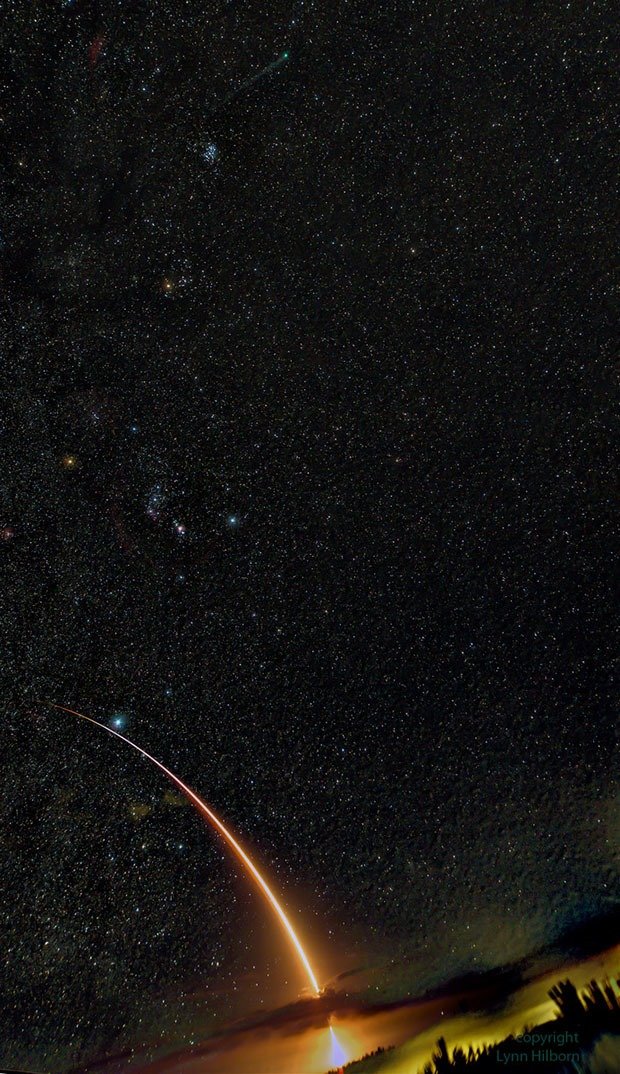 Blasting skyward an Atlas V rocket carrying a U.S. Navy satellite pierces a cloud bank in this starry night scene captured on January 20, 2015. On its way to orbit from Space Launch Complex 41, Cape Canaveral Air Force Station, planet Earth, the rocket streaks past brightest star Sirius, as seen from a dark beach at Canaveral National Seashore. Above the alpha star of Canis Major, Orion the Hunter strikes a pose familiar to northern winter skygazers. Above Orion is the V-shaped Hyades star cluster, head of Taurus the Bull, and farther still above Taurus it’s easy to spot the compact Pleiades star cluster. Of course near the top of the frame you’ll find the greenish coma and long tail of Comet Lovejoy, astronomical darling of these January nights. 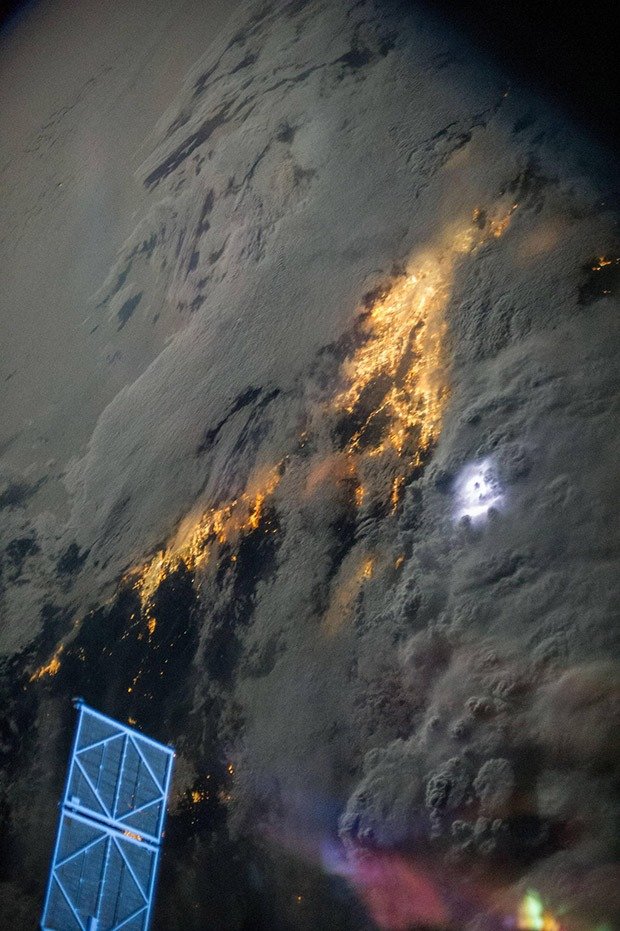 Storms over Southern California, with lightning and city lights visible through the clouds. Courtesy of the crew of Expedition 36 aboard the International Space Station. 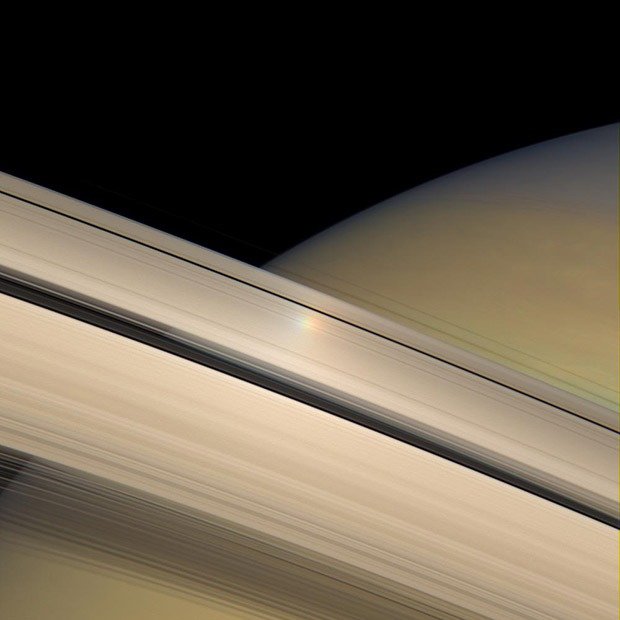 A rainbow on Saturn’s rings.

The rainbow of color seen here is actually an artifact and a by-product of the spot’s movement and the way the color image was produced. Cassini acquires color images by taking sequential exposures using red, green and blue spectral filters, which are then composited together to form a color view. The bright patch traveled across the rings between exposures taken for this view, creating a series of three colorful spots showing its position at three separate moments.

This view looks toward the sunlit side of the rings from about 9 degrees below the ringplane.

The images in this view were acquired with the Cassini spacecraft wide-angle camera on June 12, 2007, at a distance of approximately 523,000 kilometers (325,000 miles) from Saturn. Image scale is 31 kilometers (19 miles) per pixel. 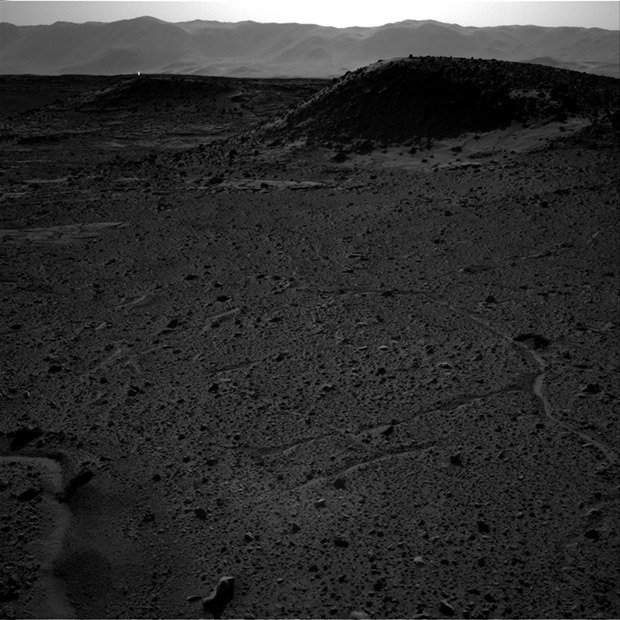 Strange flash of light (near the top of the dark hill on the left side of the image) captured on Mars by NASA’s Curiosity rover on April 3, 2014. NASA says it is either a glinty rock or a vent-hole light leak in the camera housing. The other camera took a photo at the same instance and nothing appeared in the shot. Here is an animated GIF of the two shots. 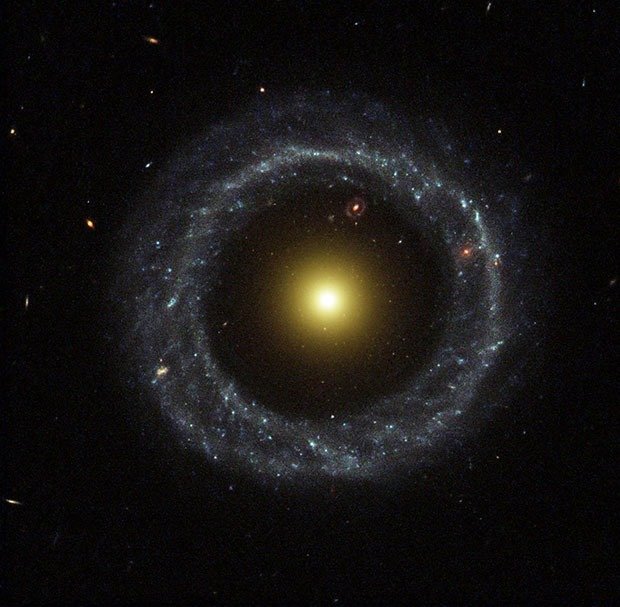 Hoag’s Object – a ring galaxy discovered in 1950 by astronomer Art Hoag, who initially thought it to be a planetary nebula. A nearly perfect ring of hot, blue stars pinwheels about the yellow nucleus of this unusual galaxy.

How Hoag’s Object formed remains unknown, although similar objects have been identified and collectively labeled as a form of ring galaxy. Genesis hypotheses include a galaxy collision billions of years ago and the gravitational effect of a central bar that has since vanished.

This image, taken by the Hubble Space Telescope in July 2001, reveals unprecedented details of Hoag’s Object and may yield a better understanding. Hoag’s Object spans about 100,000 light years and lies about 600 million light years away toward the constellation of the Snake (Serpens). Coincidentally, visible in the gap (at about one o’clock) is yet another ring galaxy that likely lies far in the distance. 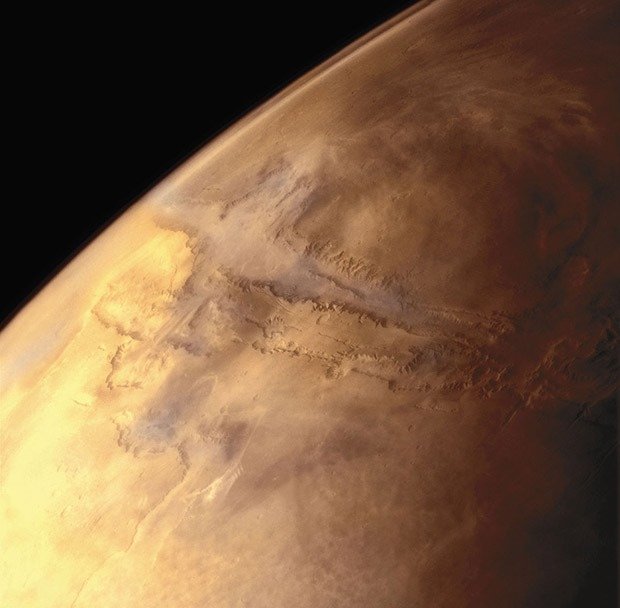 Valles Marineris isn’t a canyon in your traditional sense – the main channels weren’t carved through erosion processes such as dust storms, running water, or glaciers. It’s a massive crack across the side of the planet.

The canyon system lies just to the east of one of Mars’s other well known regions, the massive Tharsis volcanic plain, home to Olympus mons, Arsia mons, Ascraeus mons, and Pavonis mons. All massive sheild volcanoes with summits ranging from 14km to 21km. For comparison, Everest is 8.8km tall. Olympus mons alone covers an area the size of Colorado, and visibly distorts the horizon line.

Mars doesn’t have any tectonic action, so when a hotspot formed (think like what built the Hawaiian islands), all the fresh magma was belched out into one spot, rather than creating a trail of smaller volcanoes. This isn’t 100% accurate, as Tharsis took a damned long time to form, and Planetary scientists are still debating whether some mountain’s positions are due to drift or the product of a large fault. The actual formation of these mountains is a pretty deep area of research.

All the added weight on the Tharsis region caused the surrounding surface to slowly buckle due to gravitational strain. Marineris is the largest of many rift valleys pointing radially outwards. A good terrestrial analogy is the East African Rift.

As a side note, the region’s formation added enough mass to cause Mars’ spin to become unstable, causing the axis of rotation to change in order to put Tharsis across the equator. It’s also thought that Moon’s interaction with the Earth helps to stabilize Earth’s spin, potentially making it more habitable than if the Moon wasn’t there. 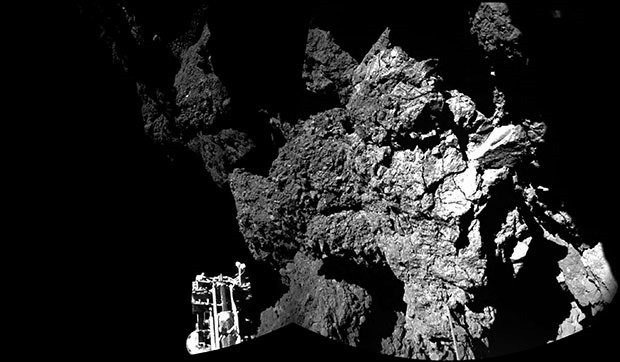 First image from CIVA confirming that Philae is on the surface.  Philae‍‍’​‍s mission was to land successfully on the surface of a comet, attach itself, and transmit data about the comet’s composition. The Rosetta spacecraft and Philae lander were launched on an Ariane 5G+ rocket from French Guiana on 2 March 2004and travelled for 3,907 days (10.7 years) to Churyumov–Gerasimenko. When it landed the comet was located between the orbits of Mars and Jupiter and coming into the inner solar system. 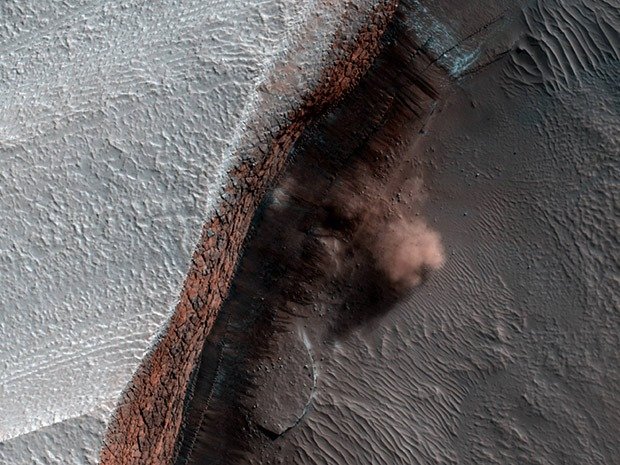 Martian landslide caught mid fall. This image was captured serendipitously by the HiRISE camera on board the Mars Reconnaissance Orbiter back in 2008.

The full image reveals features as small as a desk in a strip of terrain 6 kilometers (3.7 miles) wide and more than 10 times that long, at 84 degrees north latitude. Reddish layers known to be rich in water ice make up the face of a steep slope more than 700 meters (2,300 feet) tall, running the length of the image. 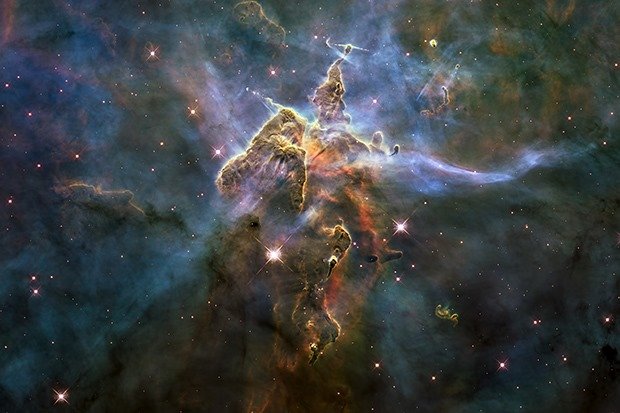 Hubble image of ‘Mystic Mountain’, deep in the Carina Nebula.

This is a really big cloud of dust millions of light years away. If you went into it, you wouldn’t notice much of a difference. The night sky might be brighter from reflections in dust particles, but you wouldn’t see much of a difference. Think of it like flying into a cloud or driving into fog. It looks solid, but when you’re in it, it’s pretty transparent. Other than the dust though, you might catch a glimpse of some extraordinary formations. These kinds of dust clouds and nebulas are the breeding grounds for protostars. If you’re lucky you might catch the birth of a solar system! 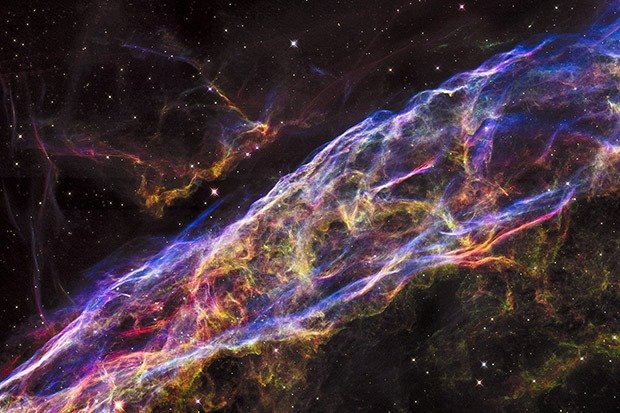 Veil nebula supernova remnant. In reality, it would look pretty gray, if you had eyeballs a few meters or so in diameter. The nebula is extremely feint. The reason why it looks so vivid is because the Hubble space telescope is equipped with narrowband filters that isolates light coming of a certain kind of atom. These atoms are being excited by radiation which causes electrons to go up one or more energy level, when they ‘fall’ back down they emit a photon of light corresponding to the type of atom.

The camera sensor only ‘see’ black and white, so they take pictures through different filters and map them to the different colors channels to make a color image.

For example, in this image the red corresponds to the alpha hydrogen emissions, which wavelength actually is in the red part of the spectrum. So it is as ‘natural’ as possible. Here is a true color image vs the one shown above, which is shot with narrowband filters.

The Butterfly Nebula with its 3 light year wingspan. Being a planetary nebula, means it is the result of a dying star. The center is the star that produced it, and this star is still shining in ultraviolet light. 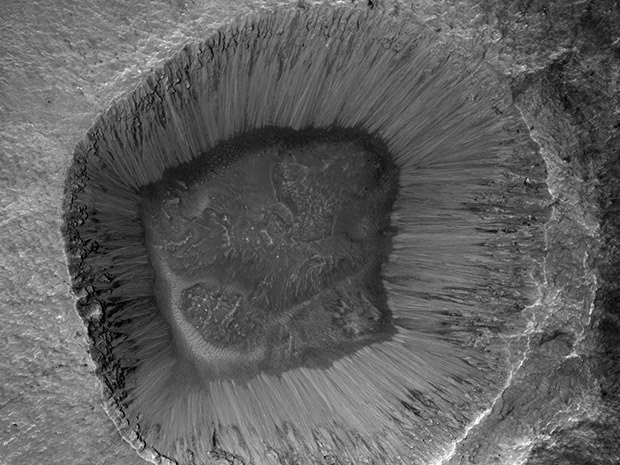 A fresh 3-kilometer diameter impact crater on Mars. The rim is still “sharp,” meaning it hasn’t eroded too much, but could be on order of thousands of years or more. So by fresh, they mean in terms of the age of the universe.