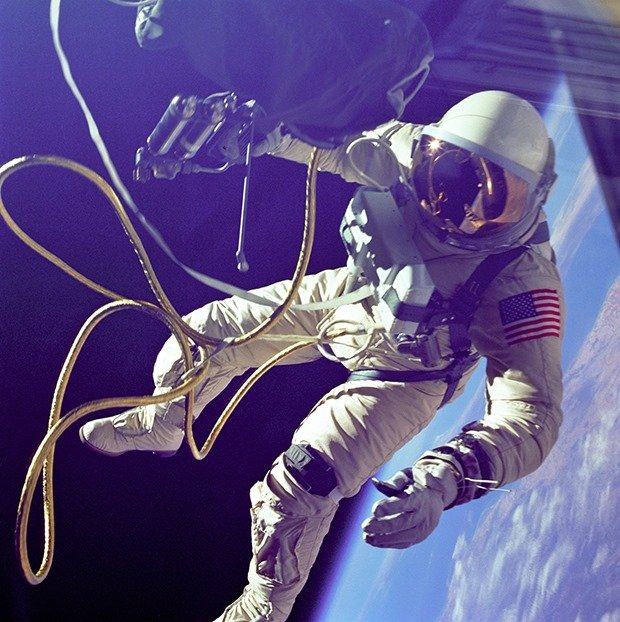 On June 3rd 1965, Ed White became the first American to step outside his spacecraft and let go, effectively setting himself adrift in the zero gravity of space. For 23 minutes White floated and maneuvered himself around the Gemini spacecraft, logging 6500 miles during his orbital stroll.

White was attached to the spacecraft by a 25 foot umbilical line and a 23-feet tether line, both wrapped in gold tape to form one cord. In his right hand White carries a Hand Held Self Maneuvering Unit (HHSMU) which is used to move about the weightless environment of space. The visor of his helmet is gold plated to protect him from the unfiltered rays of the sun. 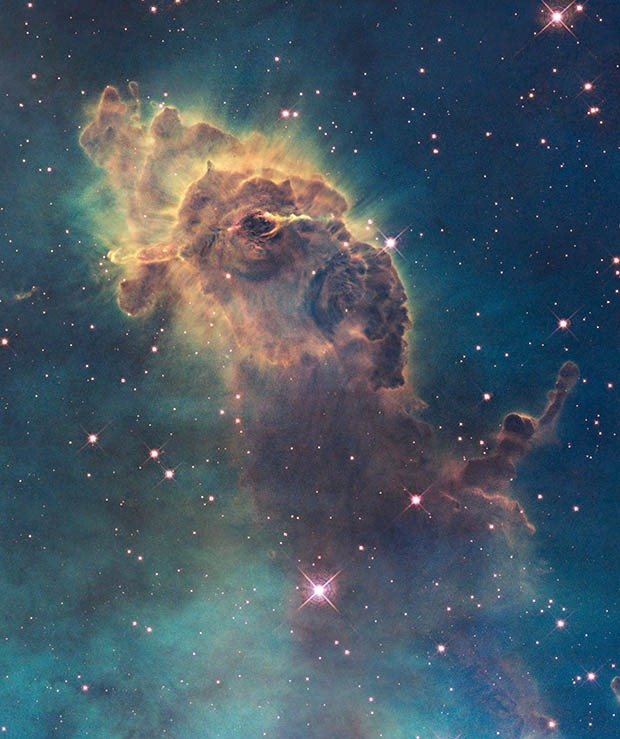 Jet in the Carina Nebula taken with Hubble’s WFC3 detector. 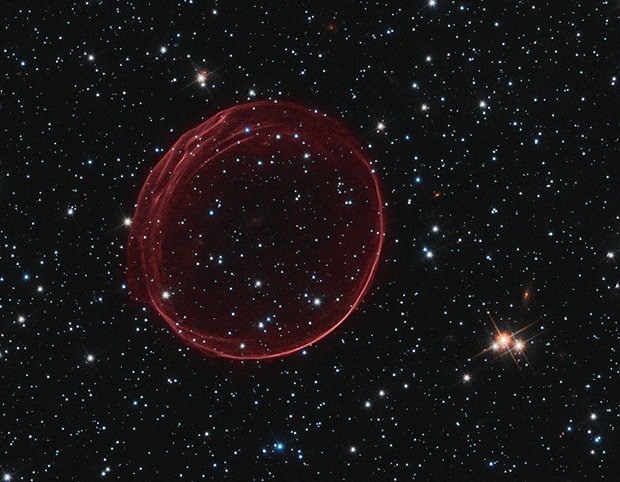 A supernova’s remnants floating in the depths of space, photographed by NASA’s Hubble Space Telescope. The pristine shell, or bubble, is the result of gas that is being shocked by the expanding blast wave from a supernova. Called SNR 0509-67.5 (or SNR 0509 for short), the bubble is the visible remnant of a powerful stellar explosion in the Large Magellanic Cloud (LMC), a small galaxy about 160,000 light-years from Earth. Ripples in the shell’s surface may be caused by either subtle variations in the density of the ambient interstellar gas, or possibly driven from the interior by pieces of the ejecta. The bubble-shaped shroud of gas is 23 light-years across and is expanding at more than 11 million miles per hour (5,000 kilometers per second).

Hubble’s Advanced Camera for Surveys observed the supernova remnant on Oct. 28, 2006. These observations were then combined with visible-light images of the surrounding star field that were imaged with Hubble’s Wide Field Camera 3 on Nov. 4, 2010. 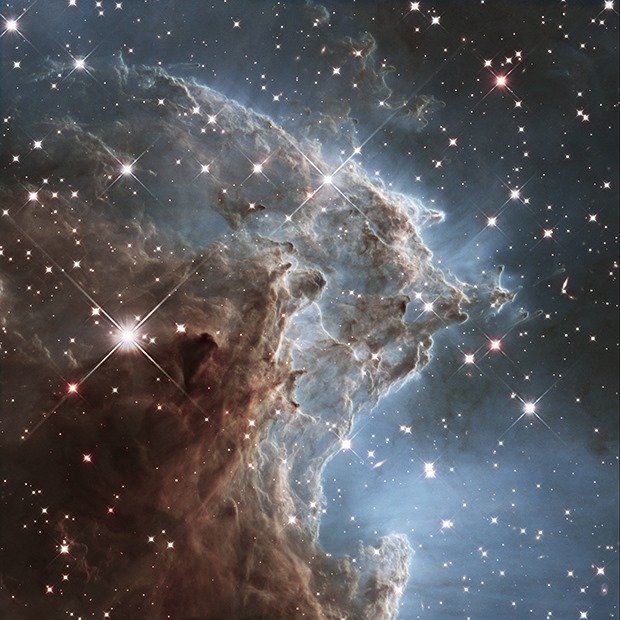 On its 24th anniversary, Hubble snapped this awesome infrared-light portrait of the Monkey Head Nebula. This “wave” is a cosmic crest of hydrogen gas and dust in the Monkey Head Nebula, a star-forming region 6,400 light-years from Earth in the constellation Orion. Hubble’s infrared view shows how the dusty cloud is being sculpted by ultraviolet light from hot stars in the center of the nebula. 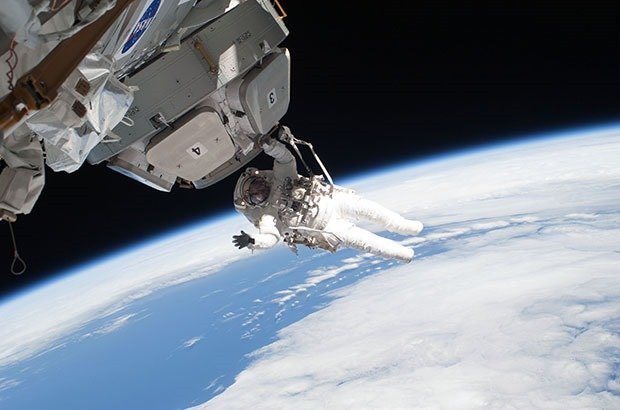 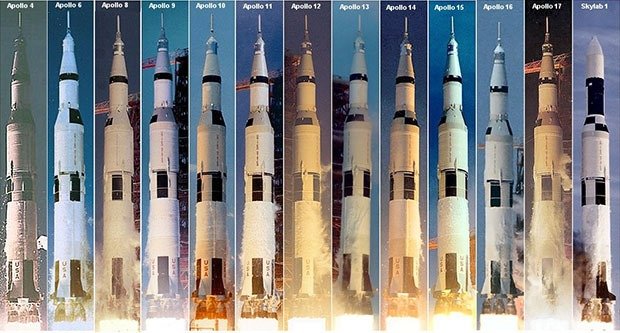 Saturn V Launches. Their launch dates were as follows: 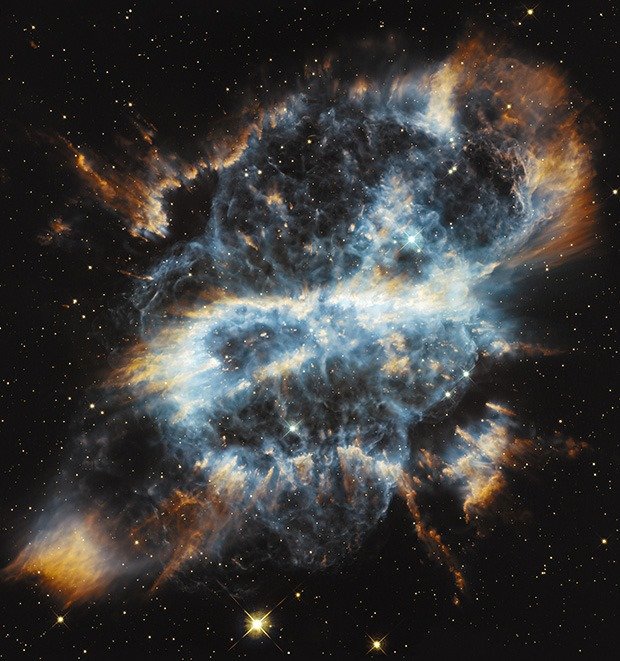 NGC 5189: An unusually complex planetary nebula. Why is this nebula so complex? When a star like our Sun is dying, it will cast off its outer layers, usually into a simple overall shape. Sometimes this shape is a sphere, sometimes a double lobe, and sometimes a ring or a helix. In the case of planetary nebula NGC 5189, however, no such simple structure has emerged. To help find out why, the Earth-orbiting Hubble Space Telescope recently observed NGC 5189 in great detail. Previous findings indicated the existence of multiple epochs of material outflow, including a recent one that created a bright but distorted torus running horizontally across image center. Results appear consistent with a hypothesis that the dying star is part of a binary star system with a pressing symmetry axis. Given this new data, though, research is sure to continue. NGC 5189 spans about three light years and lies about 3,000 light years away toward the southern constellation of the Fly. Planetary nebulas occur when low mass stars shed their outer layer relatively calmly. They are considerably smaller, a few light years across or so. 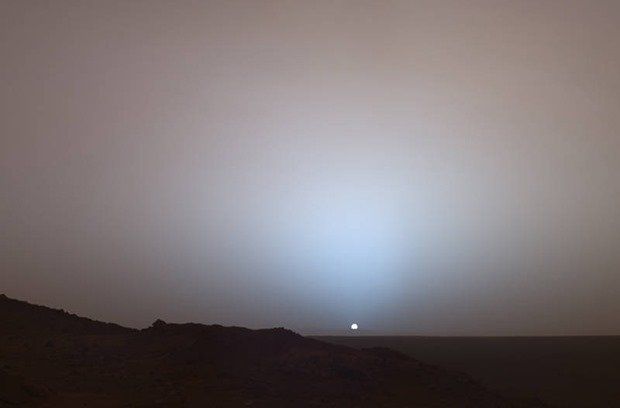 On May 19, 2005, NASA’s Mars Exploration Rover Spirit captured this stunning view as the Sun sank below the rim of Gusev crater on Mars. This Panoramic Camera mosaic was taken around 6:07 in the evening of the rover’s 489th Martian day, or sol. Sunset and twilight images are occasionally acquired by the science team to determine how high into the atmosphere the Martian dust extends, and to look for dust or ice clouds. Other images have shown that the twilight glow remains visible, but increasingly fainter, for up to two hours before sunrise or after sunset. The long Martian twilight (compared to Earth’s) is caused by sunlight scattered around to the night side of the planet by abundant high altitude dust. Similar long twilights or extra-colorful sunrises and sunsets sometimes occur on Earth when tiny dust grains that are erupted from powerful volcanoes scatter light high in the atmosphere. 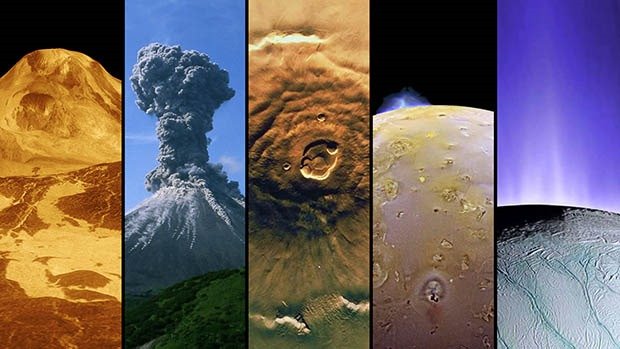 Funny story about Maat Mons – Venus is a really flat planet, due to a lack of tectonic plate activity, and due to what we think are global periods of volcanic floods. This picture, which is one of the few reconstructed views of the feature, has its vertical scale exaggerated by a whopping 22.5 times. 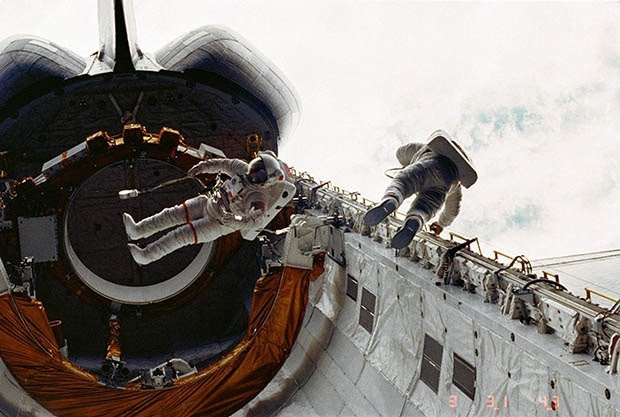 In 1983, the first spacewalk of the shuttle program: Astronauts Story Musgrave, left, and Don Peterson float in the cargo bay of the Earth-orbiting space shuttle Challenger during their April 7, 1983, spacewalk on the STS-6 mission.

I saw Story Musgrave at the Vancouver Film Festival several years ago; he did a Q&A after an art film about himI saw Story Musgrave at the Vancouver Film Festival several years ago. He was one of the most articulate, haunted, sad people I’ve ever encountered. Suicide has stalked his life (father, brother, and son, I think) and I think that being a super-high achiever was a coping mechanism. The man has six or seven PHDs in highly unrelated fields like medicine, computer science, chemistry, math, etc. He took over the family farm at 9 and started flying crop-dusters at 14 or 15. He wanted to be a helicopter pilot and joining the Marines was the way to do it, so he had to finish high-school. He did it in something crazy like a summer, while running a farm. He was asked how he joined NASA and he said that he was a trauma surgeon at the time and just before he went into surgery a NASA person asked him if he would like to become an astronaut under their new program of getting more mature, highly specialized professionals to join the Astronaut corps. He finished his surgery and flew down to Houston and was up in space within four or five years time. Someone asked him if he was happy. He said he’s as happy as he can be. Utterly fascinating conversation and very sad, too. 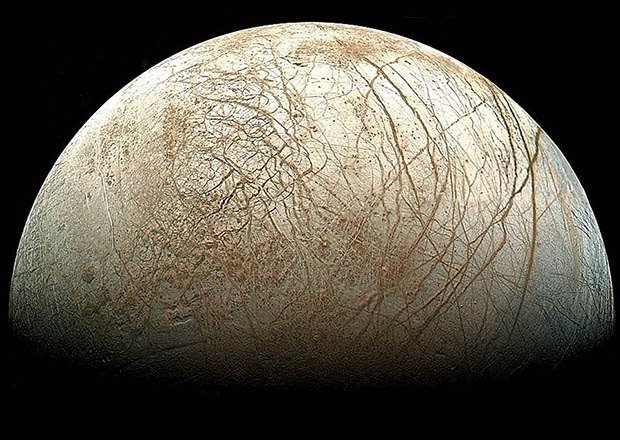 Although the phase of this moon might appear familiar, the moon itself might not. In fact, this gibbous phase shows part of Jupiter’s moon Europa. The robot spacecraft Galileo captured this image mosaic during its mission orbiting Jupiter from 1995 – 2003. Tidal forces from Jupiter cracks the ice on the surface. This also heats the Europa, causing a layer of liquid water to exist between the core and frozen surface. Scientists hope the core gets heated enough to have ‘black smokers’ (hydrothermal vents) at the bottom, which would make chemosynthetic life possible. 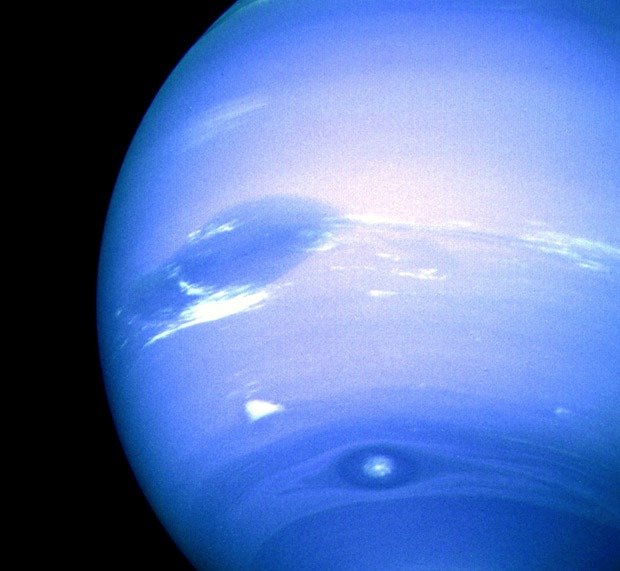 In 1994, the Hubble Space Telescope team made some new observations of Neptune and when they attempted to find The Great Dark Spot as gone. But they found an all new dark spot appropriately called, New Great Dark Spot, forming in the northern hemisphere. And they’ve found subsequent Dark Spots since then.