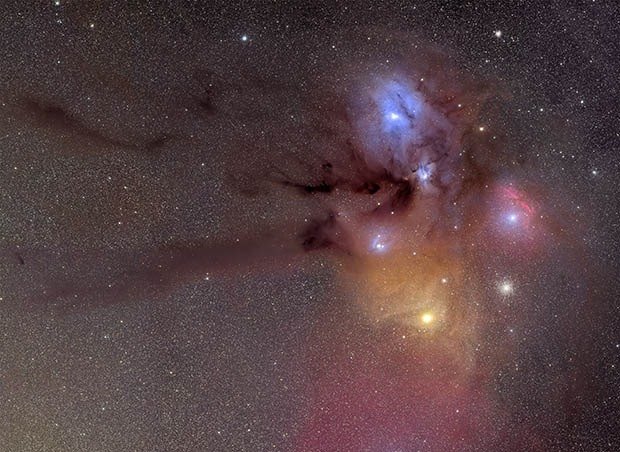 A dust cloud referred to as the Dark River appears near the red supergiant Antares, part of the constellation Scorpius.

Murky looking, the Dark River’s appearance is caused by dust obscuring background starlight, although the dark nebula contains mostly hydrogen and molecular gas. Surrounded by dust, Antares, a red supergiant star, creates an unusual bright yellowish reflection nebula. Above it, bright blue double star Rho Ophiuchi is embedded in one of the more typical bluish reflection nebulae, while red emission nebulae are also scattered around the region. Globular star cluster M4 is just seen above and right of Antares, though it lies far behind the colorful clouds, at a distance of some 7,000 light-years. The Dark River itself is about 500 light years away. The colorful skyscape is a mosaic of telescopic images spanning nearly 10 degrees (20 Full Moons) across the sky in the constellation of the Scorpion (Scorpius). 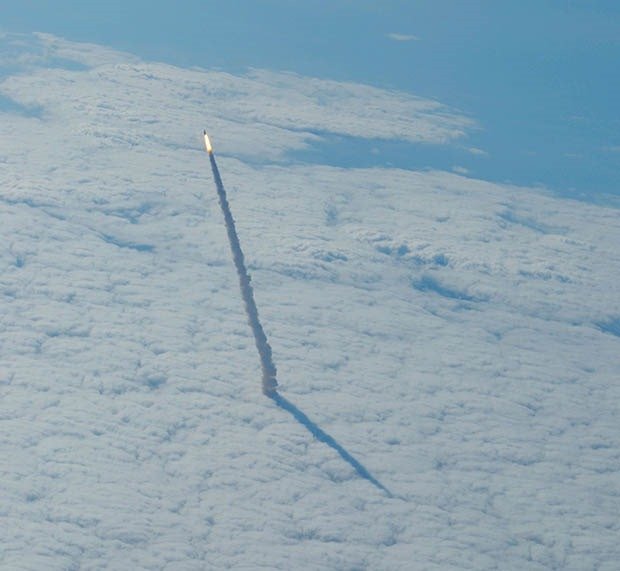 This is space shuttle Endeavour launching to orbit photographed in May 2011. Images of the rising shuttle and its plume became widely circulated over the web shortly after Endeavour’s final launch. The above image was taken from a shuttle training aircraft and is not copyrighted. Taken well above the clouds, the image can be matched with similar images of the same shuttle plume taken below the clouds. Hot glowing gasses expelled by the engines are visible near the rising shuttle, as well as a long smoke plume. A shadow of the plume appears on the cloud deck, indicating the direction of the Sun. 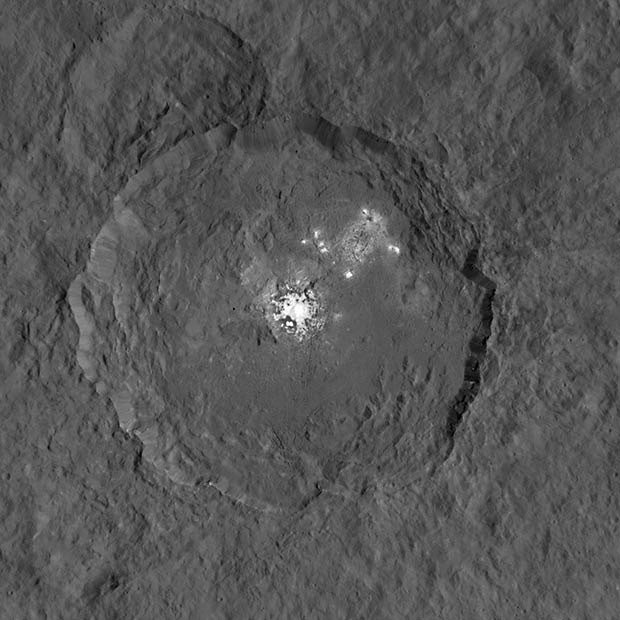 Ceres’ Bright Spots Seen in Striking New Detail: Image taken by NASA’s Dawn spacecraft shows Occator crater on Ceres. On 9 December 2015, NASA scientists reported that the bright spots on Ceres may be related to a type of salt, particularly a form of brine. Ceres is the largest object in the asteroid belt, which lies between the orbits of Mars and Jupiter. 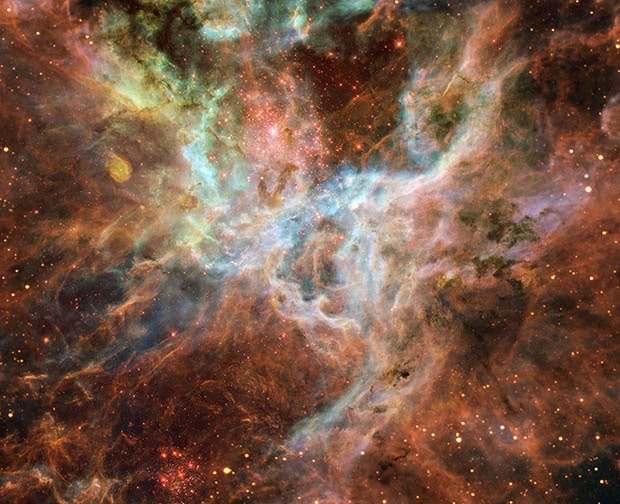 The Tarantula nebula is located 170,000 light-years away in the southern constellation of Dorado, in our neighboring galaxy, the Large Magellanic Cloud. Just above the centre of this image there is a huge cluster of very hot stars called R136. These stars there are among the most massive stars we know. 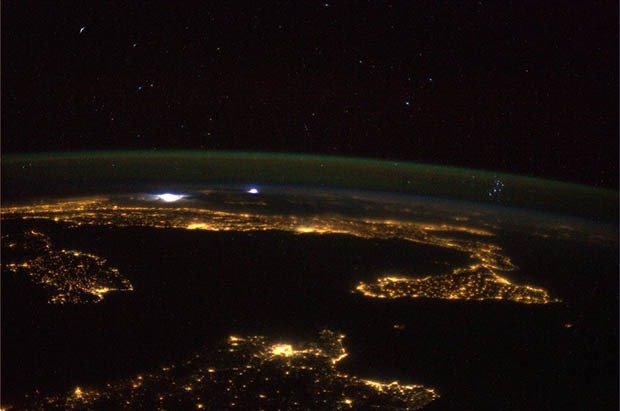 The Mediterranean, the Pleiades and a storm in the distance. Photo taken from ISS by astronaut Luca Parmitano 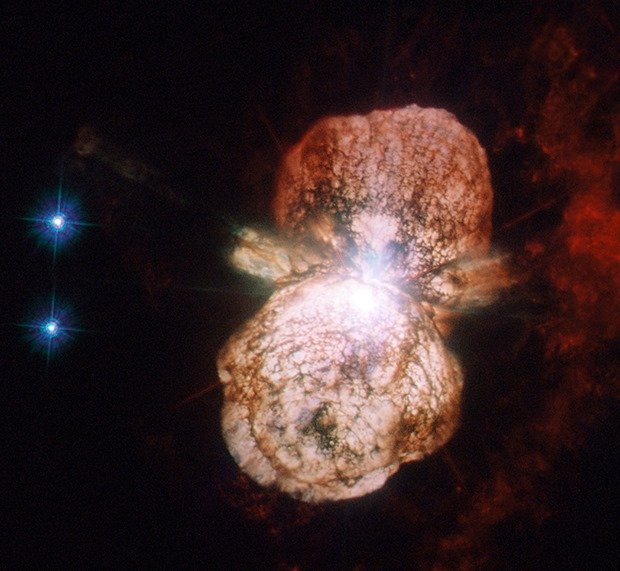 Gigantic lobes of gas and dust billowing from the supermassive star Eta Carinae at a speed of 1 million km/h.

Eta Carinae is a stellar system in the constellation Carina, about 7,500 to 8,000 light-years from the Sun. The system contains at least two stars, of which the primary is a luminous blue variable (LBV) that initially had around 150 solar masses, of which it has lost at least 30. A hot supergiant of approximately 30 solar masses is in orbit around the primary, although an enormous thick red nebula surrounding Eta Carinae makes it impossible to see this companion optically. The Eta Carinae system is enclosed in the Homunculus Nebula, itself part of the much larger Carina Nebula, and currently has a combined bolometric luminosity of over five million times the Sun’s. Because of its mass and the stage of its life, it is expected to explode in a supernova or hypernova in the astronomically near future. 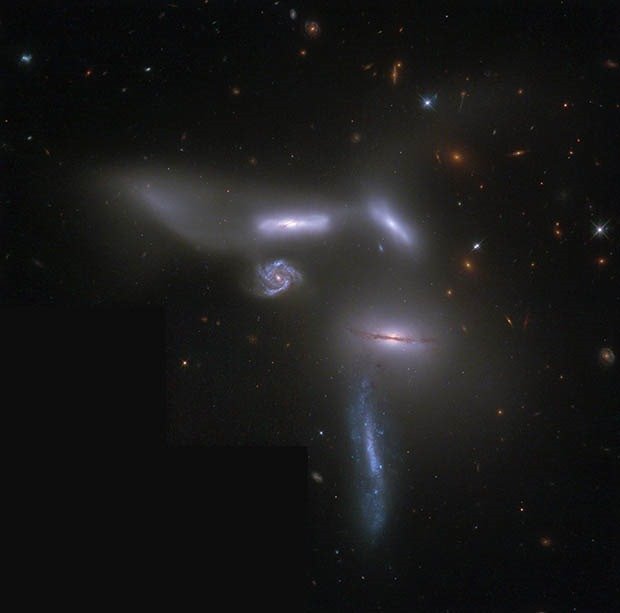 What will survive this battle of the galaxies? Known as Seyfert’s Sextet, this intriguing group of galaxies lies in the head portion of the split constellation of the Snake.

The sextet actually contains only four interacting galaxies, though. Near the center of this Hubble Space Telescope picture, the small face-on spiral galaxy lies in the distant background and appears only by chance aligned with the main group. Also, the prominent condensation on the upper left is likely not a separate galaxy at all, but a tidal tail of stars flung out by the galaxies’ gravitational interactions. About 190 million light-years away, the interacting galaxies are tightly packed into a region around 100,000 light-years across, comparable to the size of our own Milky Way galaxy, making this one of the densest known galaxy groups. Bound by gravity, the close-knit group may coalesce into a single large galaxy over the next few billion years. 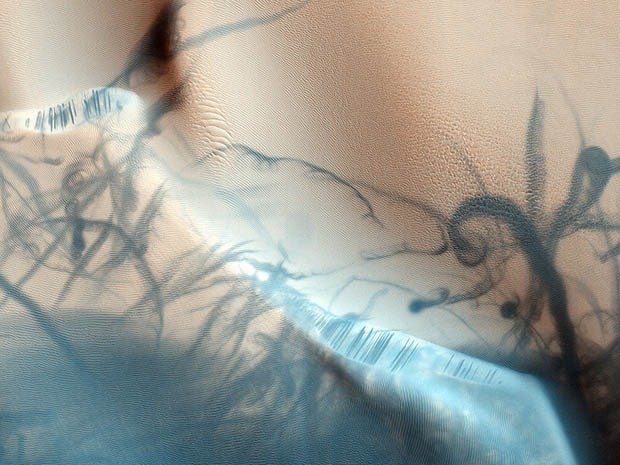 Dust trails on Mars taken by  Mars Reconnaissance Orbiter.  This portion of a high-resolution picture from the HiRISE camera on board the Mars Reconnaissance Orbiter shows twisting dark trails criss-crossing light colored terrain on the Martian surface. Newly formed trails like these had presented researchers with a tantalizing Martian mystery but are now known to be the work of miniature wind vortices known to occur on the red planet – Martian dust devils. Such spinning columns of rising air heated by the warm surface are also common in dry and desert areas on planet Earth. Typically lasting only a few minutes, dust devils becoming visible as they pick up loose red-coloured dust leaving the darker and heavier sand beneath intact. On Mars, dust devils can be up to 8 kilometres high. Dust devils have been credited with unexpected cleanings of Mars rover solar panels. 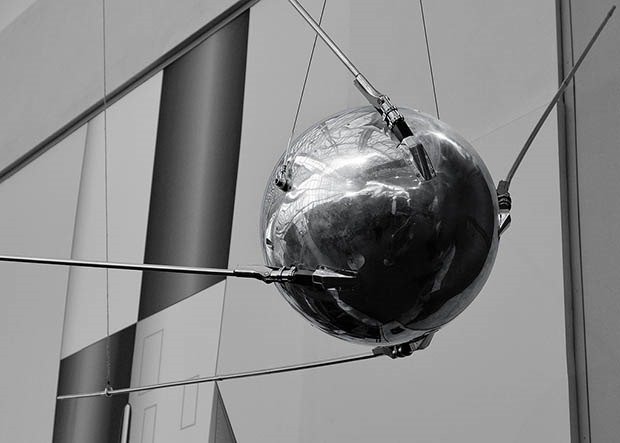 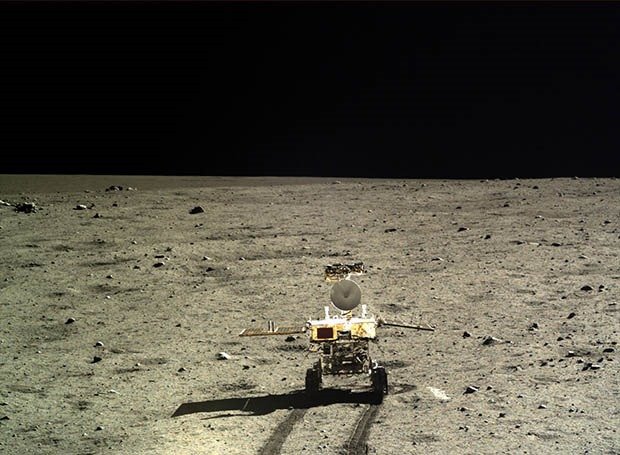 The Chinese lunar rover Yutu starting its mission. The Chinese moon lander Chang’e 3 landed on the moon on 14 December 2013 and released the rover shown in the image, known as Yutu, to explore the lunar surface. Unfortunately the rover had some mechanical problems and turned immobile in late January 2014, but it still was apparently able to gather various useful data in the immobile state. 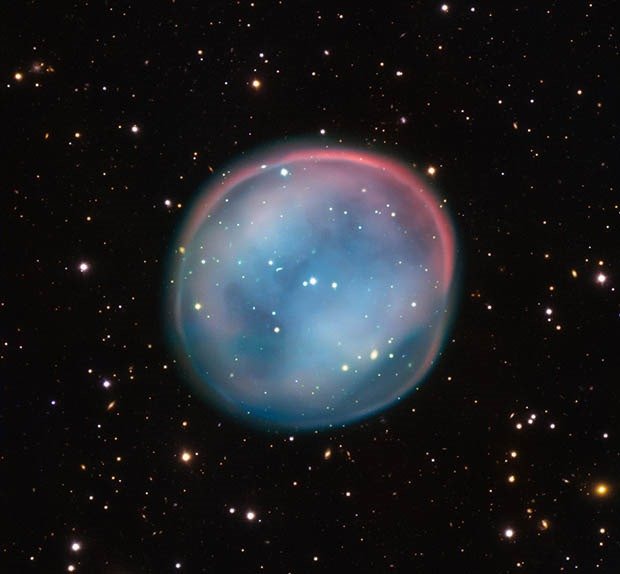 The sun’s ultimate destiny will mirror the drama captured in vivid new photos of this ghostly bubble — the glowing remnant of a slowly dying star. A collapsing star released this shell of glowing gases, known as the Southern Owl Nebula, which has grown to 4 light-years across. The phenomenon happens to stars up to eight times the size of the sun as they age: any bigger, and the collapse will trigger a supernova explosion instead of this outpouring of gases. 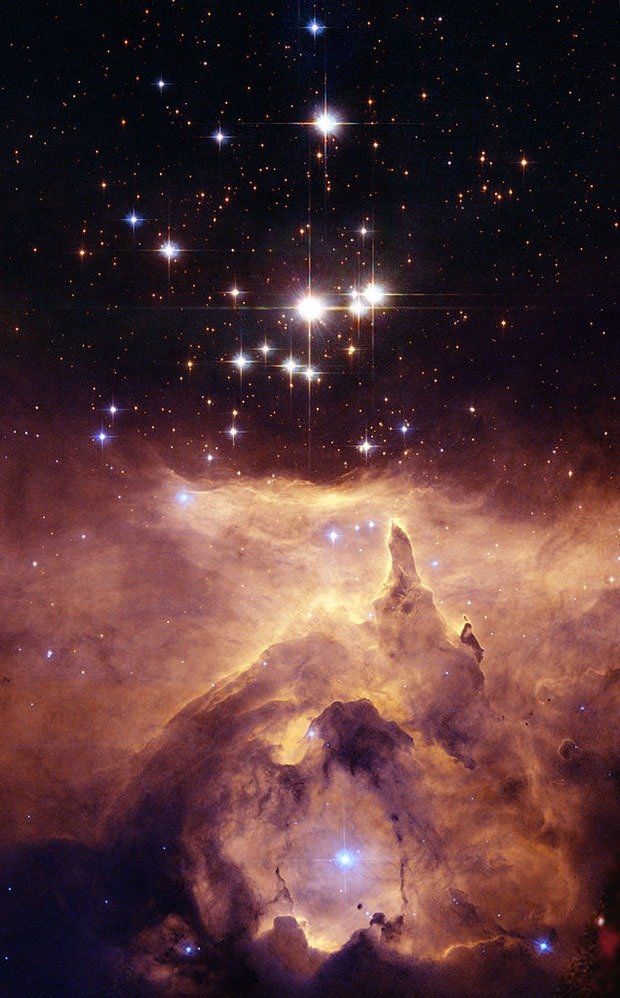 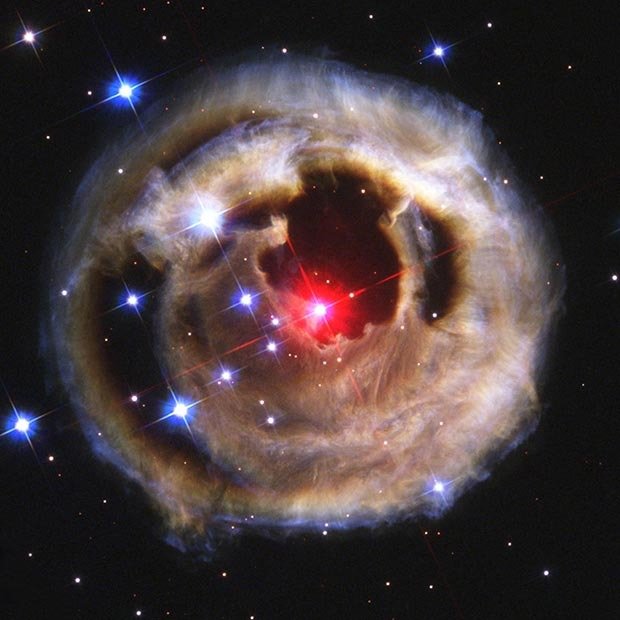 Red Supergiant Star V838 Monocerotis. Red supergiants usually have a diameter several hundred times that of the Sun and weigh 10 times more than the Sun. The red supergiants phase is very short lived, they only last for a hundred to a million years before exploding into a supernova. Here’s a timelapse-like animation of multiple Hubble photos of this nubula as it expands.