A view of Byzantine Constantinople in AD 1000. Another view. For reference, here’s a schematic labeled map (from the late middle ages). 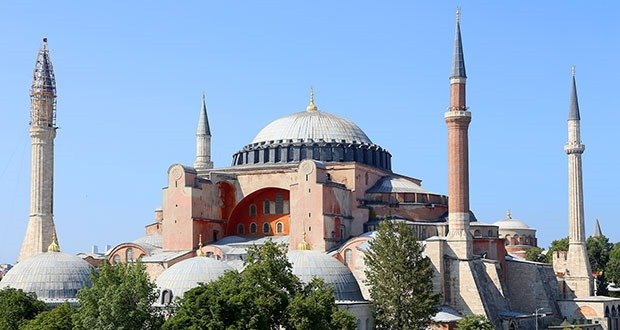 As often in these maps there are not enough houses. Hagia Sophia is about 80m wide. It takes about 40 pixels on the image. On the other hand, the image is 1200 pixels wide, so there should be about 2.4 km (being very generous) from Theodosian Walls to Boukoleon. In reality there are around 6km. So it needs to be at least 9 times bigger.

I’m a big believer that a lot of these maps are approximations since it’s hard to fit entire cities onto paper without it just being massive. Just judging by the historical size of the city, and the total population, this has an average of a thousand people per building. For a more realistic view see this: Byzantium 1200.

That’s super dense for a city 800 years ago. They sat on the biggest international trade route between east and west. It was also the capital of Rome for a thousand years, well at least half of it, technically and it got a lot smaller towards the end. Constantine moved the capital to Constantinople while the empire was still in one piece. The final division would occur a couple decades later. And it was only half of it for about a hundred years, at which point the western half fell. It was truly a cultural wonder, and its existence and fall were partly responsible in a few different ways for the Renaissance in Italy and the rise of Russia.

The Vikings called it “Miklagård”, basically meaning “The big city” or “The big trading center.” Slavs called it “Tsargrad”- the city of the Tsar or Caesar or emperor. Many peoples, like the Greeks and Armenians simply called it the City, Poli(s). The name Istanbul is derived from the Greek phrase meaning “in the city” or “to the city”, reinterpreted as a single word.