Here are this week’s interesting maps.

The whole Indian subcontinent lights up brightly as usual along with the eastern corridor of China. They both are very fertile. Ganges-Brahmaputra in India and Yangtze river basin in China are very fertile regions. In fact, the Sunderbans in Eastern India and Bangladesh are considered the most fertile region in the world. Also India despite being the seventh largest country by area, has the largest arable land (China is 4th after the US and Russia) which can support a large population.

For all the criticism of the one-child policy in China, it helped keep the population growth in check. China’s now stable at 1.35 billion while India keeps growing and is now at 1.25 billion. Indian fertility rate is currently 2.45 (per woman) and has been steadily falling from 5.8 for the last 50 years, without the massive human rights violations. You need about 2.33 children per woman to be able to sustain a population. India’s nearly there. Sure, they would have curbed growth a lot more with a one child policy, but they are absolutely heading in the right direction, and continue to. This is part of the reason why the UN actually expects global population decline from 2050 onwards. Populations in rapid growth centers, like India and parts of Africa, are increasingly urbanizing. People in cities have lower fertility rates.

China went for two child policy recently. They have reached stability and now they don’t want the population to decline, just stay the same. China now has over 30 million more men than women because of people aborting female babies, and this will only increase. On top of that, China will face significant challenges supporting an aging population.

The sudden sharp decline of people between North East India and Western China is because of Himalayas that run right along that border. The area north of the mountains, Tibetan plateau and the Tarim Basin/Taklamakan Desert (famous for camel caravans) is less habitable. 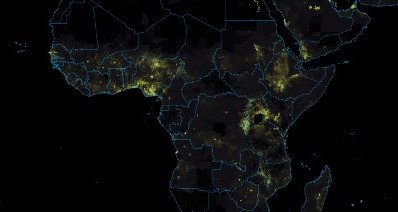 Another surprising place that lights up brighter is the central African countries of Nigeria, Tanzania and Ethiopia. All of those seem even brighter than the U.S. coastlines – although the population of the U.S. is relatively evenly spread.

These three together have almost exactly the same population as the US, but the US is way bigger. Tanzania will be one of the most populated countries in 2100. Tanzania will have like 300 million in 2100, and the DRC will have 388 or so. 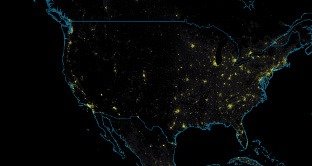 If you look closely at the US, there seems to be a very distinct line running straight north out of Dallas all the way to Winnipeg. Lots of people to the east of it, then the population density immediately drops once you go west of it. It’s the 100th meridian, where the great plains begin.

The 100th meridian is actually really interesting in a few ways. One of which is that it also majorly divides crops based on rainfall(to the east, corn, to the west, wheat). The Rocky Mountains cause a massive rain shadow effect across the Western United States. There is very little rainfall from the Rockies all the way to the 100th meridian. As a result, there is little to no reason to live there. It is nearly impossible to sustain a large population, which is why the area never developed.

Everything east of the line was settled by people moving west after the colonies. People rushed to get land for fertile farming and kept pushing and pushing until the essentially hit this line, so they stopped. The population then grew in those eastern areas because there was no place for it to expand to(without going all the way to California). As time went on we began to pull water from underground aquifers to farm wheat in the western, dry area, but by that time our population growth had slowed down severely. The result is a sharp divide in population density.