The best single thing to remember is, “don’t make it a thing that is different from other things.” People talk about specific flirting behaviors: smile, touch, use eye contact. What’s the connection between the general principle and these specific behaviors? When we’re relaxed and not repressed by anxiety, our feelings naturally reveal themselves to people around us. When someone is relaxed and open, you can tell when they’re happy and when they’re angry, how pleased they are to see you, when they’re bored or interested by what’s going on, and when they’re offended. Flirting is just a special case of this. If you’re interested in a woman, it should show just like your other feelings show. If your behavior doesn’t indicate that you’re interested, but out of the blue you ask the woman out, your invitation will seem confusing and possibly creepy. The inconsistency screams that something is wrong. 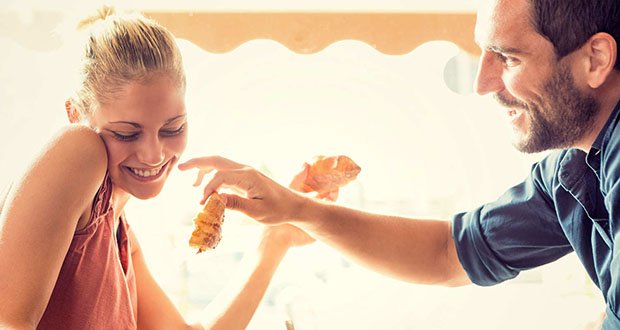 Objective descriptions of flirting can help with this: smile, touch her arm, lean in and speak low, and so forth. It may seem awkward and artificial, but at least she knows what’s going on: you’re interested, but you’re awkward and nervous. (If she can tell what’s going on in your head and feels like you’re being open about it, that pretty much erases the creep factor.) HOWEVER, I think flirting behavior checklists are best studied as a description of how your interest in a woman would naturally express itself if you were open and uninhibited. If I was attracted to a woman, I would stand closer to her than if I wasn’t attracted to her. If I felt we were making a connection, I might lean in and make a joke in a low voice for just the two of us. I would naturally feel comfortable with certain kinds of touching. Flirting behaviors aren’t a game plan or a code; they’re a natural side-effect of feeling attracted and connected. 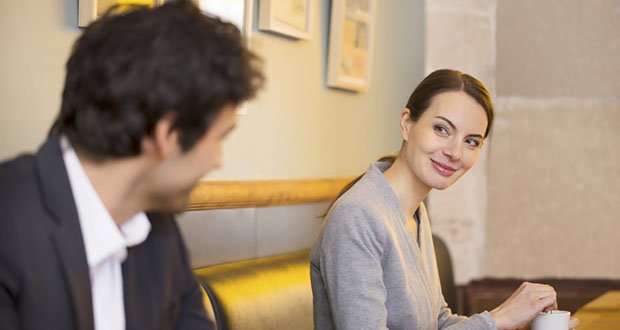 Luckily, many people who have trouble expressing their feelings of attraction via flirting are simply repressed across the board and don’t express their other emotions any more fluently than they express attraction. When you say, “It’s not exactly in my nature, and any scenarios I create in my head result in me feeling like I’d be really uncomfortable/self-conscious,” it sounds like this is your problem. If that’s the case, then you can practice expressing your emotions in many scenarios every day. That’s why I say “luckily!” Remember it isn’t a thing that’s different from other things. Learning to express happiness, anger, frustration, fear, and relief loosens you up and helps you recognize and work around your repression. Slowly turn up the volume on your emotions (figuratively, and maybe literally, too.) When you express annoyance with your cable being out. When you express ambivalence about your parents coming to see you. When you express delight at being invited to a party. (Expressing your feelings openly will require you to confront unpleasant and embarrassing feelings. Is there some hostility towards the call center employee mixed into your annoyance about the cable not working? Is there an undertone of craven desperation in your gratitude at being invited to the party? Any time you feel it isn’t appropriate for you to express your feelings, you should figure out why. Oftentimes we repress ALL of our emotions because we’re afraid that some of them may be inappropriate. Analyzing the social appropriateness and inappropriateness of your feelings will give you the confidence to selectively repress certain emotions instead of repressing your entire personality. It might also motivate you to do some emotional housekeeping.)

Once you’re more comfortable expressing your feelings, you’ll be comfortable flirting, too. Then, when you read about flirting behaviors, you won’t think, “This isn’t me,” you’ll think, “This is how people in my culture act when they feel a certain way about someone. It’s perfectly appropriate for me to feel that way, and when I do, this is how I will act, so that people will know how I feel.” 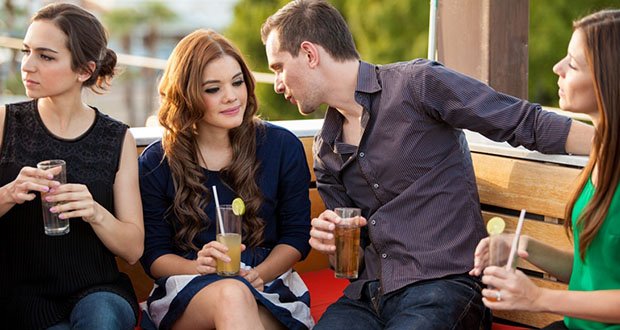 Seeing flirting as a natural expression of feelings helps you understand that there are situations where it’s appropriate to flirt even if a pick-up isn’t a socially appropriate outcome. Women like to be appreciated; there’s never any harm in communicating honest admiration and even attraction. You don’t have to worry about being creepy by flirting with women out of your league, or even flirting a little bit with a married woman. You only have to worry about what feelings you communicate via your flirting. Never express the feeling that a woman SHOULD go home with you, or that you’ll be aggrieved or in any way judgmental if she doesn’t. (Or do if you want. It’s douchey, and like all douchey things, it probably works on some people.) If you find yourself at a bar sitting next to Natalie Portman, flirt away, but make sure you don’t even express the HOPE that she’ll go home with you, because dude, she’s married. That would be insulting. Just allow your admiration for her beauty and accomplishment to shine through. (And stop if she gets bored.) If you’re flirting with your girlfriend’s sister or your buddy’s wife, make sure you are A1 super pro all-star at expressing your feeling of the appropriate boundaries in your relationship, and make sure your feelings really do reflect those boundaries. That’s elite level sh*t right there, and even expressing things perfectly to your flirting partner won’t save you if the third party misunderstands. I don’t play with that fire except in very, very limited and impossible to misunderstand ways, but others have more confidence in their skills.

Personally, I’ve found this perspective on flirting to be extremely liberating, and it has helped across my entire life. The ability to express your feelings more flamboyantly is EXTREMELY useful when you find yourself communicating with people who are, shall we say, a bit “louder” with their emotions than the family or culture you grew up in. Also, it’s much healthier to habitually express yourself than to habitually repress yourself. Every time you mute your emotional reaction to something, you are sending a message to yourself that you and your feelings are not socially accepted. When you express yourself, sometimes people will disagree or even laugh, but at least you respected yourself enough to speak up. Being open about your feelings might alienate your from some of your habitual acquaintances, but it will also help you find like-minded people. (Remember in American History X when Ed Norton took off his shirt in the prison yard so everyone could see his swastika tats? “All the wrong people knew who I was anyway, so I figure I’m just gonna put up a flag and hope a friend sees it.” I wish I could come up with an equally good non-evil example, but Ed Norton’s character understood that it was better to let his freak/Nazi flag fly and hope for allies than to surrender his pride to his detractors by hiding who he really was.) 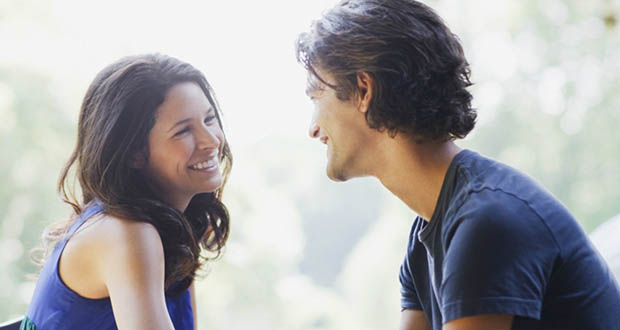 And, of course, it’s very nice to meet someone and know that all you have to do is let your feelings drive your behavior. There are some toxic feelings that drive women away, but they’re the feelings that any nice person can dispense with: self-hatred, hostility, coldness, fatalism, and so on. You don’t have to radiate world-mastering confidence. It’s okay to be nervous and a little self-conscious. After you date a few women who are attracted to anxious, self-conscious guys, you might decide that you aren’t actually into such women. In that event, you can examine your feelings and your way of expressing them to figure out what you should change to attract the women you really want. Or you might enjoy dating those women for a while, have a revolutionary leap in confidence, and suddenly find yourself going out with a different kind of woman, because your way of expressing yourself naturally changed to reflect your increasing confidence. Awesome how that works, eh? The way men and women get together will start to seem like an imperfect but somewhat logical system rather than a bizarre cross between mountain sheep mating rituals, the Konami code, and Rube Goldberg’s acid dreams. For you, one part of the system is malfunctioning: your ability to express yourself openly and accurately. Fix that and you will get to see the system working as intended.