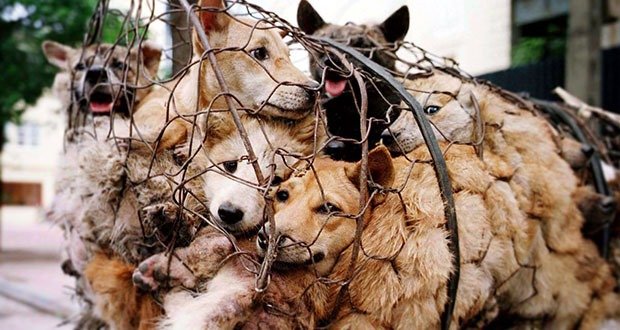 21. In June Yulin, China will be hosting its annual dog and cat meat festival where dogs and cats stolen out of back yards and off the street will be packed as tightly as possible and transported to Yulin to be cooked, boiled, skinned and butchered alive and fully conscious to be eaten. Here is vice’s report from last year, as this is an annual thing. Even though there is much opposition, the government just says it doesn’t condone it or it isn’t happening.

Also in Vietnam and other regional countries, like China, sun bears are kept in crush cages (literally just large enough to hold the bear) and have their gall bladders drained a few times a day for their bile to be used in traditional medicine concoctions. There are alternative ways of obtaining the chemicals in the bile as well. The bears live a life of agony and there have been unsubstantiated reports of a mother bear smothering her cub and slamming her head into a wall killing herself when she was able to get free. There have been substantiated claims of the Bears in extreme psychological and physical distress slamming their heads in the bars and losing much of their fur, they have their limbs hacked off if someone wants a bear paw for their traditional medical concoction, etc.

22. Investment Banks (what we often really mean when we refer to “Wall Street”) are doing the EXACT same things in 2016 that allowed the Great Recession back in 2008 to be so SEVERE (as in stockmarket dropped 40%, our country’s bottom two quintile has only just begun to recover to pre-recession levels almost a DECADE later).

The main culprit (there were obviously A LOT of other things going on) is something called Collateralized-Debt-Obligations (CDOs). Remember hearing about subprime-mortgages a few years back? Well the only reason there was SO MUCH demand for these subprime-mortgages back in the 2000s leading up to the Recession was because CDOs can eat it ALL up.

How does it work? Imagine taking out a mortgage by signing your dog’s name (because that was how easy it was back in early-mid 2000s). That mortgage is held by the commercial banks and trusts and mortgage lenders that regular people like you and me are familiar with. Now, the commercial banks would collect a whole bunch of mortgages (very shi*ty ones mind you), hundreds and thousands of them, and pool them into a single mortgage-backed securities. And then they’d create thousands, millions of these securities.

These securities (usually bond-like things) can still be traced to the individual mortgages, it’d just take A LOT of time to sort out the credit-worthiness of the base (which no rating agency bothered to do anyways). As in a astute investor could still go analyze the underlying mortgages to see if they are really credit-worthiness (obviously almost no one did).

Well the mortgage-backed securities weren’t the end of the story. Investment banks (like Goldman, Morgan Stanley, JP Morgan, Merrill Lynch, you get the idea) were the market makers of the mortgage-securities. The more they sell these things backed by crappy mortgages the more brokerage fees they earn. However, they always ended up with a good amount of the sh*ttiest of the sh*t mortgage-securities that no investors would buy. Sooo they repackaged the sh*ttiest of the sh*ts into CDOs, called these CDOs (which by definition were worse) “diversified”, and then sold them to investors, telling them CDOs were as safe as US Treasury Bonds! (and with 8%, 10% interest!)

Who WOULDNT want to buy these magical things called CDOs? And thus the subprime mortgage market ROAAARED as there was virtually limitless demand for mortgages to feed the CDO machine (billions, TRILLIONS worth of CDOs and mortgage-backed securities were sold by the Great Recession). And yes, you can create CDOs out of CDOs. Its like a way to magically create money out of thin air (imagine millions and billions of dollars of CDOs, all based on the mortgages of one county in Miami), and if all the mortgages go bad, people who actually bought the CDOs (the pension funds, retirement funds, mutual funds) loses all their money, which they did.

The investment banks themselves bought their own CDOs too! Hundreds of billions worth of CDOs were on the books of investment banks and all became worth NOTHING. Why do you think we had to bail them out, and let the fed go through with TARP (Troubled-Asset-Relief-Program)? What do you think those troubled-assets WERE?? ITS THE CDOs!

ALOT of things on the books of the investment banks were transferred to the books of the federal reserve, and its still there to this day. (although the underlying mortgages probably aren’t as worthless as before)

Going back to my first statement, DA*N INVESTMENT BANKS! BACK AT IT AGAIN WITH THE CDOs! Just go take a look for yourself 🙂 (a quick google search suffices. Also, its seems to appear under a new name, “bespoke traunch opportunities”).

Yay capitalism right? Much Innovation. So Smart. Yet if it weren’t for the CDOs and money that’s based on NOTHING, the Great Recession would not have been the WORST recession since the Great Depression. Keep your eyes open guys and stay vigilant.

23. I work in marketing and PR, and many people think it is a job for lazy people, and this is what smart people want to make you believe because PR is making people more ignorant. Edward Bernays, the father of PR, admitted that Public Relations is another word for Propaganda. Now, with the new brand and evolving techniques in managing public opinion & perception, we are fed stories after stories, targeting our emotions, to increase further distrust, racism, and inequality.

The basis of all this comes from Le Bon’s “The Crowd”. A very effective theory around group behavior, the control, and manipulation of groups. It would take far too long to explain it all, but feel free to read Le Bon first and then move towards Bernays.

You will realise that Bernays spent a lot of time helping the government and intelligence agencies. The most famous example is him using Public Relations to overthrow the Guatemalan government for Chiquita Bananas. It said that he advised the CIA for a while, where Operation Mockingbird was born, the operation that puts journalists, editors and news anchors on the payroll of the CIA. Officially the Operation is not active anymore, but come on. Seriously?

PR was also used in the invasion of Iraq. If you Google the moment when Iraqi people pulled down Hussein’s statue, you will find some articles about the involvement of a PR agency, which staged the whole thing for the press.

24. A large percent of the workforce, at least in the US, is via temporary contracts. The employers seem to have the upper-hand in all negotiations. As a chemist with two degrees, I expected to be making decent money out of college. I ended up in a 1.5 year “temporary” position at Proctor and Gamble (through a different company) with hundreds of other “temporary contractors”, doing the jobs of actual chemists and getting paid less than what people think the new minimum wage should be. $14 an hour to do method development and research, basically be the hands of a phD. Their business structure on the R&D side is to have one phD, and 40-50 “temps” to cut costs. It’s despicable. And it isn’t just them. You have to be pretty damn lucky to get a job anywhere through an actual company and not a staffing agency these days, at least in chemistry.

For those curious, next job was a year as a temp for $18/hour for a different company. Recently moved to a different state, and was making $20/hour for yet another temp agency before I was let go due to a reduction in force. Left on good terms with references at all 3 jobs, but no permanent positions.

When people talk about the economy I just laugh. Sure, jobs are being added. Sure, the minimum wage sucks. But it seems skilled jobs like mine and others I know that I have worked with (accountants, engineers) have fallen through the cracks somehow. The spotlight is on the lowest paid jobs in fast food or Walmart – I feel my “class” is just out of reach. We aren’t low enough for people to care, and we aren’t high enough to be in the position to not care ourselves. I’d be willing to venture a guess this isn’t isolated, but I don’t have the numbers to back it up as nobody is looking into it.

25. I’m not dumbfounded that people don’t know since it’s such a small country without influence, but Montenegro is the only country in Europe with a totalitarian government disguised as democracy, with the same man ruling for over 23 years now. There have been protests all throughout 2015 and going into 2016, but I fear people will be bullied into silence and hunger yet again. No one cares that there’s a dictator in Europe.