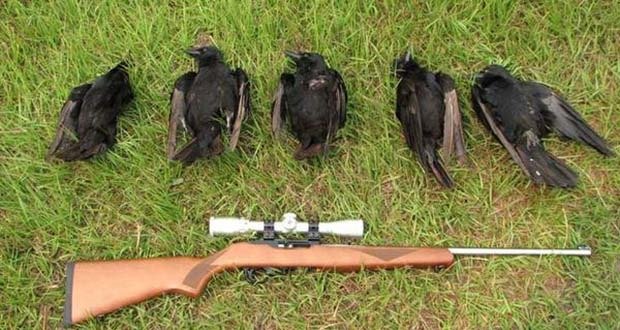 21. I met a guy growing up who “was in the military”. He had a black bag in the closet that no one was allowed to look in, and would get calls in the middle of the night and be gone for a week or two.

I one time watched him exterminating crows that were destroying his mother-in-law’s garden. He would sit there totally motionless for 5 minutes with the pellet gun in his lap. Then all of a sudden he would snap the rifle to his shoulder, and then just sit there for another couple of minutes. Then with no warning he would shoot, and always hit. The murder of crows wouldn’t even notice. He did that for a couple of hours until they were thinned enough to start noticing that maybe this wasn’t the garden to mess with.

What made him even scarier is that he had pretty major heart problems, so whatever he did for the military, he did it well enough that they kept him on staff despite that.

22. I worked inpatient mental health in college. We had a frequent flier who was a bodybuilder who abused steroids. We always had a team to escort him to the locked unit because he would always go off and would have to be restrained. I was the team captain on one of his admissions and thought well crap. I’m only 5’4”, he was 6’7” and all muscles and agitation. I told him, “I’m small and you’re tall. You are going to very nicely walk down the hall on your own with your chin up. Got it?” He yes mam’d me and I never had a problem with him. When he went off he could flick people off like a booger on a finger.

23. I went to high school with this terrifying girl. She was overweight, never shaved her legs (or anything for that matter), had acne all over her body, and looked like she had never showered. Aside from her physical appearance, the things she said were really creepy. She would always talk about death and killing people. She shaved her head one day, Britney Spears style, and kept it like that for months. She had been suspended several times for making threats on other students. Not the “I’m going to kick your ass” kind, but the “I swear I am going to kill you if you come to school tomorrow” threats. In class, she would always doodle pictures of guns and knives. She had been removed from class multiple times for freaking out on teachers/students, and even flipped a desk one time. She wasn’t bullied that badly. People mostly just avoided her. I was always nice to her, mostly l because I was scared of her.

Anyways one day I’m in class talking to my friend about school clubs. The scary girl came up and started talking to us. My friend was really freaked out but I tried to make conversation. She ended up saying something along the lines of, “Yeah, I’ve always wanted to start ‘The Future School Shooters of America club!”

I was thoroughly freaked out. My friend and I decided to go to guidance and tell a counselor about it. I haven’t seen her since. I have no idea what happened to her.
Sometimes I feel bad about it, knowing that I probably got her expelled, but another part of me says that I may have stopped a school shooting.

24. A friend right now actually. He’s only 19 but there’s seriously something dark about him. One time we were in a parking lot with some of his friends and this jerk yells at us from across the lot, just being a D-bag. I ignore him, but my friend gave him this look. I don’t know how to explain it. It was like death incarnate, like whatever thoughts he had become physical. I was seriously afraid. It wasn’t just an “angry” look, it was literally murderous. Not too long after that he looked at me like that. It was like he looked through me. Boy, I felt weird. Thing is, I can now recognize that particular look. Not too long after that incident I was watching a TV documentary about Chinese kids addicted to the internet being put in special camps. At one point a boy is told to talk with his father about his feelings. Anyway, the boy gave him the exact same look as my friend did. I told my mom “he wants to kill him”. Sure enough, not a few moments later he gets up and almost strangles his dad before people pull him off. My mom was shocked. I’ve seen actors try to pull it off. Nope, it cannot be replicated.

Anyway, there’s just something about my friend. He seems normal around other people and stuff, but if I try to talk to him 1 on 1 after he’s been quiet for a bit… I just don’t know, I try avoid looking him in the eyes. It’s just creepy. I get a feeling, like there’s a pressure in my stomach/chest just warning me to run.

Link to documentary I am talking about.

25. I’ve met and have known gangsters, drug dealers, killers, ex spec op soldiers, and 2 people that have killed their abusive/murderous parents in my time. I was never scared or intimidated by any of them because I knew they weren’t crazy. All except one. We’ll call him Kenny.

Kenny was recently released from jail after 10 years. Apparently he had ties to the local mob and was actually pretty high up. We were sitting in a coffee shop when he came in. My friend is the son of one of Kenny’s circle so he comes over and says hi, introduces himself to me.

Right away I could tell this guy was off. He was cold in his demeanor and he had dead eyes. He gave off a really bad vibe like I could kill you without batting an eye.
Anyway, I guess he was there to extort the owner of the shop. He was back in town so he wanted his dues. After he spoke with us he had a heated discussion with the owner. The shop got quiet. Kenny’s entourage made their presence known and discouraged anyone intervening.

At this point, the owner’s GF got in Kenny’s face and without hesitation, he started beating her mercilessly. No one could do anything without risking some serious consequences. Even the owner had to sit and watch while Kenny went to town on his GF. It was disturbing.

Needless to say, everyone noped out of there real quick. Never saw the guy again but heard he got locked up again 2 months later on extortion and attempted murder charges. Some people just don’t belong out here.