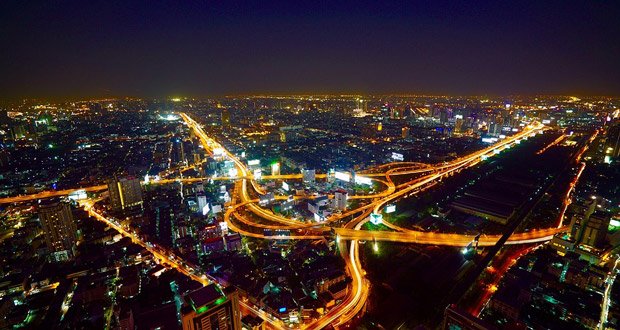 1. Traffic is so bad in Bangkok that Thai Traffic Police has a unit of officers trained in basic midwifery in order to assist deliveries which do not reach the hospital in time. – Source

3. There’s a batch of beef stew in Bangkok that’s been simply “topped up” for 40 years. Any bowl you order could have bits of decades old. – Source

6. In between the two runways in Bangkok’s Don Mueang International Airport, the 14th busiest airport in the world, there is a fully functioning golf course. Golfers are held back by a red light whenever planes land. – Source

9. “Nazi Chic” is a popular fashion trend in Bangkok. – Source 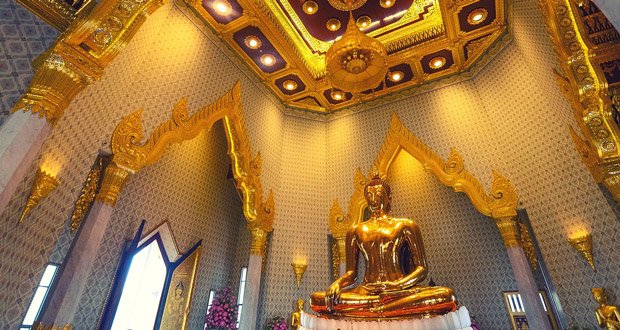 11. The largest solid gold statue on Earth is a Buddha located in a temple in Bangkok, Thailand. The seated figure is approximately 9.8 feet tall and weighs about 5.5 tons. – Source

12. There’s a restaurant in Bangkok where they catapult a flaming chicken to a unicyclist who catches it with a spiked helmet. – Source

13. In 2009, Bangkok nightclub fire caused 66 fatalities, it started during a performance of a band coincidentally named “Burn”. – Source

14. In 1989, the world’s longest sentence for corporate fraud of 141,078 years was handed down to Chamoy Thipyaso in Bangkok, Thailand, according to Guinness World Records 2006. She defrauded more than 16,000 Thais in a pyramid scheme worth $204 million at the time. – Source

15. In 2010, thousands of Bangkok demonstrators gathered to empty plastic containers of donated blood, collected from volunteers, on the fences of gateways to government headquarters. – Source

16. In 1986, the Robot Building was built in Bangkok to house the Bank of Asia. Complete with eyes and antennae, its design reflected the computerization of banking. – Source

17. There is a charity lets inmates of a high-security prison in Bangkok fight for money and shorter sentences. – Source

18. Bangkok used to be known as the “Venice of Asia” due to it being built around canals. – Source

19. 1 in 10 dogs in Bangkok estimated to be infected with the rabies virus. – Source

AskReaders: What is a dying tradition you believe should be preserved?