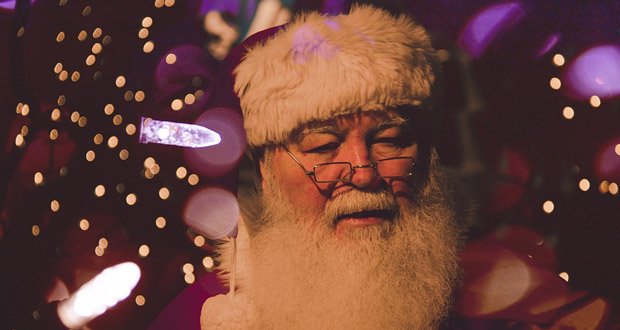 1. There is a Santa Claus University that teaches professional Santa Claus skills like toy knowledge, poses, and how to avoid a lawsuit. A top-level Santa Claus can make up to $100,000 a year. – Source

2. In 1961, a little girl wrote a letter to JFK asking if Santa Claus was okay during the Soviet’s nuclear testing at the North Pole. Kennedy wrote back to her saying that he spoke with Santa and that he’s okay. – Source

3. In the Marvel comics, Santa Claus is actually the world’s most powerful mutant ever registered by the X-Men. – Source

4. A former President of Equatorial Guinea celebrated the Christmas of 1975 by having 150 of his opponents executed in a soccer stadium by soldiers dressed as Santa Claus. – Source

5. Canada formally awarded Santa Claus official citizenship and gave him his own postal code (H0H 0H0) so children can send him letters. – Source

6. Shirley Temple’s mother took her to see Santa at the mall when she was young. The mall Santa asked for her autograph, and this is when she stopped believing in Santa Claus. – Source

7. The reason that NORAD annually tracks Santa Claus’ journey from the North Pole is that Sears printed an ad to talk to Santa on his private line, with a wrong phone number that was actually CONAD’s top secret hotline that would only ring if there was a national crisis. – Source

8. Will Ferrell was Santa Claus in a Pasadena mall with Chris Kattan as his elf sidekick until his career took off. – Source

9. The Dutch Santa Claus (Sinterklaas) delivers presents on a gray horse accompanied by black men and kidnaps children to bring to Spain if they’re naughty. – Source

10. Santa Claus was issued a pilot’s license from the United States government in 1927. – Source

11. In some Alpine countries, the Santa Claus character is accompanied by a devilish companion called Krampus, who murders naughty children by drowning them in a bathtub that he carries around with him. – Source

12. Santa Claus has been excluded from the “Forbes Fictional 15”, which lists the wealthiest fictional characters, since 2006, due to the fact that they had received countless letters from children insisting that he was real. – Source

13. There is a Finnish Christmas film called Rare Export in which Santa Claus is a killer monster. –Source

14. There is an American fraternal order for men with beards who resemble Santa Claus. They host seminars and training on how to best portray Santa professionally and even offer official certification to their members. – Source

16. There is a Christmas tradition that involves a pickle ornament. The finder of the Christmas Pickle ornament on Christmas morning gets an extra present from Santa Claus and will have a lucky year. – Source

17. It is illegal in Ohio for alcohol advertisements to represent, portray, or make any reference to Santa Claus. – Source

18. Santa Claus is actually an English pronunciation of the Dutch word “Sinterklaas,” which translates back into English as Saint Nicholas. – Source

19. In 1968, not only did Philadelphia Eagles fans throw snowballs at Santa Claus but that even today general consensus among fans is “Santa had it coming.” – Source

20. The first documented department store Santa Claus was in Brockton, Massachusetts in the year 1890. The idea was so intriguing that it attracted visitors as far away as New York and Rhode Island. – Source

22. The popular image of Santa Claus was not created by The Coca-Cola Company as an advertising gimmick; by the time Coca-Cola began using Santa Claus’s image in the 1930s, Santa Claus had already been used extensively in other companies’ advertisements and mass media. – Source

23. There is a statue of Santa Claus in Rotterdam that most people call, “Kabouter Buttplug(Gnome Buttplug)” because the Christmas tree Santa holds looks like a buttplug. – Source

24. Thomas Nast, the guy who designed the elephant for the GOP, also created the modern design for Santa Claus. – Source

25. In Iceland, instead of Santa Claus, they have 13 “Yule Lads” and one arrives every day from Dec 12 until Jan 6. Three of them are Sausage-Swiper, Doorway-Sniffer, and Spoon-Licker. – Source

26. The Russian Santa Claus lives with his granddaughter and typically delivers gifts in person on New Years Day. – Source

27. The legend of Santa Claus, the North Pole, Christmas trees, flying reindeers, and other Christmas legends seem all to be linked by the Amanita muscaria mushroom. – Source

28. Basques have there own version of Santa Claus, Olentzero, who keeps his presents in a beret and drinks wine instead of eating milk & cookies. – Source

29. There is a central Asian version of Santa Claus; “Ayaz Ata” the winter god, who is based on ancient Turkic mythology. –Source

30. The physical look of Santa Claus is largely based on the pagan god Odin. According to folklore, Odin the gift bearer rode a ghostly procession through the sky called the Wild Hunt during the celebration of midwinter known as Yule. Even today, the word for Christmas in Scandinavia is still Yule. – Source

AskReaders: How would you feel about a law that requires people over the age of 70 to pass a specialized driving test in order to continue driving?