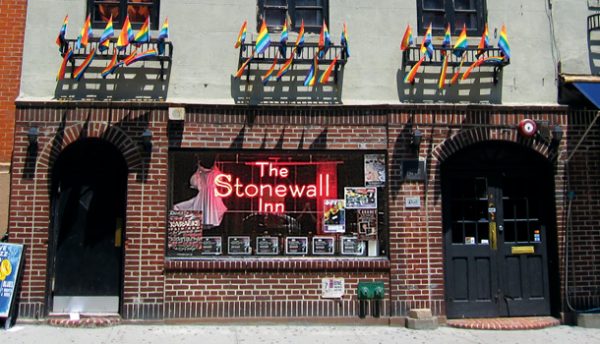 Kickassfacts.com has brought you part one and two of our Hate Crime series, now we bring part three: 10 Facts About The Stonewall Riots…

2. The Raid Sparked The First Riot

Police roughly hauled employees and patrons out of the bar, leading to six days of protests and violent clashes with law enforcement outside the bar. The 1960s and preceding decades were not welcoming times for the community, in fact, solicitation of same-sex relations was illegal in New York.

3. Clubs And Bars Were Places Of Refuge

For LGBTQ individuals bars and clubs were a place of refuge, where they could express themselves openly and socialize without worry. However, the New York Liquor Authorities penalized and shut down these places. Any place that served alcohol to known, or even suspected, LGBTQ individuals, was fined or shut down arguing that the mere gathering of homosexuals was “disorderly.”

4. The People Weren’t Pleased With The Police’s Behavior (To Say The Least).

Officers allegedly targeted Stonewall for its lack of a liquor license and owners’ possible blackmail attempts on gay attendees. They arrested thirteen people in total, some for violating the statue on inappropriate gender apparel.

5. Police Had To Hide Inside The Stonewall Inn

When customers saw the police striking a prisoner on the head, they lashed out. They hit the police with anything they could reach, including bottles, stones, and loose change. People even wrestled loose parking meters, trying to use them as battering rams. Police, fearing for their safety, locked themselves in the Stonewall Inn. People weren’t happy, and the riots only got worse from there…

6. The Angry Mob Got Worse Throughout The Night

The mob grew by the thousands. Some were attempting to catch the property on fire. Reinforcements were eventually able to get the crowd under control, or at least… For a night… While the crowd did disperse, the police’s issues were far from over. The next night the Stonewall Inn reopened and another mob formed to meet the police, only both sides were far more aggressive.

7. Protesters Were Enraged By The Village Voice

The police used violence to stop the mob. Tempers flared again over the next days, and The Village Voice published two stories using homophobic slurs to describe the scene at Stonewall Inn. Angry about the demeaning coverage, protesters took to the streets again. Some descending on the offices of the Voice (An NYC cultural newspaper), which was located just down the street from the Stonewall Inn.


8. Not All Protests Were Violent

During the uprising, some protesters opted for a nonviolent approach in order to be heard. An eyewitness reported residents forming Rockette-styles kick lines that performed in front of stern-faced policemen. Others chanted or sang in protest phrases like “Liberate the bar”.

9. This Eventually Led To The Gay Rights March

Once the riots subsided, after about six days, protesters were filled with motivation to organize for their rights. A year after the riots, residents started marching on Christopher Street and Sixth Avenue. June 28th was dubbed Christopher Street Liberation Day. While the march had thousands of participants, the change of how the LGBTQ community is treated has been slow going, with small leaps here and there.

Following the riots, Stonewall’s patrons were still faced with police harassment and were growing uncomfortable with the mob affiliation. Months after the event, Stonewall became a juice bar before subsequent owners tried operating it as a bagel shop, a Chinese restaurant and a shoe store in the 1970s and 1980s. New owners renovated the building in 2007. Today, Stonewall is once again operating as a bar and club at 53 Christopher Street in Manhattan. Naturally, everyone is welcome.

July 13, 2019
Latest Posts
Subscribe to Blog via Email
Did you know?
Loading...
Facts of the Day
Registration is disabled.