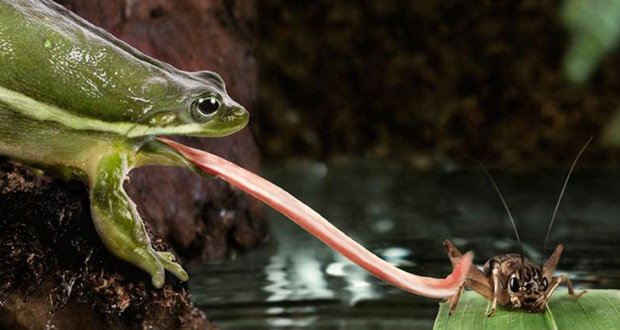 According to the Guinness Book of World Records, the longest human tongue in the world is 10.1 centimeters. Proportionally, that’s nothing compared to a frog’s tongue. On average, a frog’s tongue is about one-third of the length of its entire body length. Imagine reaching your refrigerator from the comfort of your living room with your tongue.

Even if you’ve watched frogs catch flies with their long tongues, you have probably never thought about the saliva on a frog’s tongue. Frog saliva can liquefy and solidify to maintain its grip on its prey. The saliva becomes solid, then liquid again before pulling its prey inside its mouth. The saliva is a non-Newtonian fluid, meaning it does not follow Newton’s law of viscosity. 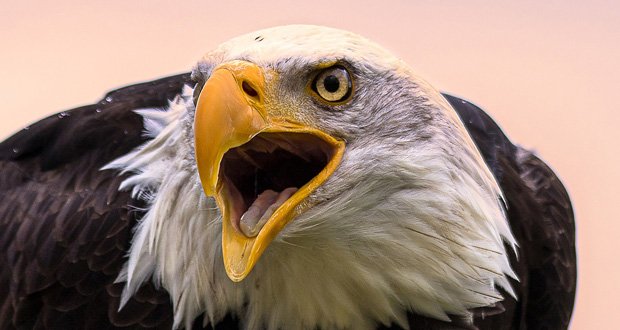 The bald eagle, that national bird with its fierce hunting abilities and resilience to survive after the population was threatened, also has a claim to fame in the world of strange animal tongues. However, the eagle’s tongue is on the opposite end of the spectrum of a frog’s.

The tongue of a bald eagle is quite flexible but is so short an eagle cannot even stick out its tongue. This is probably a good thing for the eagle, considering how incredibly sharp their beaks can be. Imagine biting your tongue with those sharp edges! Ouch!

You could say a chameleon’s tongue sticks to the truth…if the truth is food. Like the song’s lyrics “Karma Chameleon,” the chameleon tongue does, in fact, come and go. It is not as long, proportionally speaking, as the frog’s tongue, but it is approximately half the chameleon’s body length and contains a sticky substance with which to trap its prey and bring the meal to the reptile’s mouth.

A chameleon’s tongue comes and goes quickly, as it can spring out in a matter of microseconds. To put it in perspective, think about the speed at which a bullet leaves the barrel of a gun. Of course, the exact speed depends on the length of the barrel and the type of ammunition, but there’s not a lot of time to get out of the way of a speeding bullet. Like a bullet’s speed, a moving chameleon tongue is no match for an unsuspecting insect. The prey rarely sees it coming, considering the chameleon spends most of its time sitting still, camouflaged into its environment with its mighty tongue ready for its next tasty treat.

To have such a sharpshooting tongue, the mechanism of the chameleon’s tongue is fairly complicated, involving three basic structures. These are the Entoglossal process (base of the tongue), the accelerator muscle (which generates the tension), and the retractor muscle (which works like other muscles).