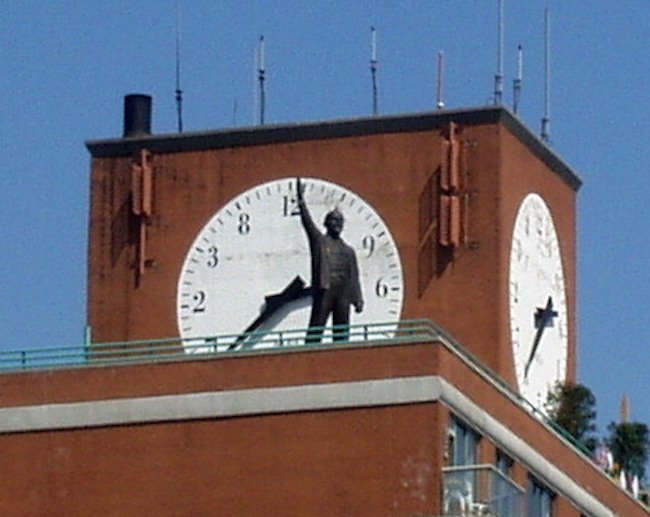 1. A 17-foot statue of Vladimir Lenin was removed from a rooftop in NYC’s East Village, where it stood for 20 years. The statue had been positioned to face Wall Street, the emblem of capitalism. – Source

2. In 1920 a horse-drawn wagon filled with explosives was blown up on Wall Street in NYC, killing 38 people and injuring hundreds. The perpetrators were never caught. – Source

3. Smedley Butler earned 2 Medals of Honor but said to his military career “…I spent most of my time as a high-class muscle man for Big Business, for Wall Street and the bankers.” – Source

5. There are thousands of slaves buried under Wall Street. – Source

6. The Trinity Church, located on Wall Street, owns 14 acres of Manhattan real estate with a net income of $38 million of real estate holdings making it the richest individual parish in the world. – Source

7. J.P. Morgan (Chase Bank) had so much money that he bailed out the U.S. Government twice and Wall Street once. – Source

8. Bear Sterns (now JPMorgan) executives were discovered to have cheated clients out of billions that were the likely core of the Wall Street bank bailout, but the U.S. Attorney General ignored the whistleblowers. – Source

10. Wall Street got its name when Dutch settlers erected a wall to keep out attackers and wild hogs. – Source

11. Hetty Green, AKA the Witch of Wall Street was considered the richest woman at the time and renown for her extreme frugality. – Source

12. Descendants of Welsh pirate Robert Edwards claim the right to 77 acres of Lower Manhattan, including the part of Wall Street after it was awarded to their ancestor in the 18th century by Queen Anne. – Source

13. Three Wall Street executives won the Powerball lottery in 2011. The $254 million jackpot was larger than the $82 million their small investment firm managed. – Source

14. On the day of the stock market crash in 1987, Ben & Jerry’s sent a truck to Wall Street to hand out free scoops of “That’s Life” and “Economic Crunch”. – Source

15. Pete Dawkins is a man who won the Heisman Trophy at West Point in the 50s, received a Rhodes Scholarship to study at Oxford, fought in Vietnam and rose to the rank of Brigadier General, and now works as an executive on Wall Street. – Source