Here is part 6 of Interesting Portraits of Humanity. If you missed part 5 that we posted more than 6 months ago, here is the link to check it out. 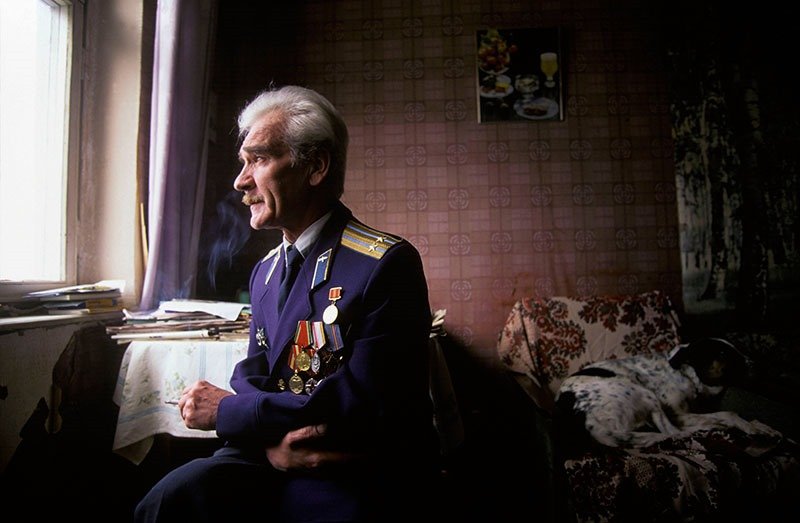 Stanislav Petrov, the man who made the decision not to fire at the United States after a faulty report from the Russian missile detection that a nuke had been fired, which probably prevented WWIII.

To clarify, Stanislav Petrov did not actually make a decision not to fire nuclear weapons in response to a false positive detection of an incoming nuclear strike from the USA. He did not have the authority to order a nuclear response. What he did do was choose not to follow hard and fast protocol to call and report the detection up the chain of command to his military higher-ups and members of the Soviet Politburo as he had been ordered to do once a detection had taken place.

This incident occurred on September 26, 1983. In that incident, Stanislav Petrov was a Lieutenant Colonel in the Soviet Air Defense Forces who was serving as the senior duty officer in charge of the command center at a Soviet early warning bunker (known as “Serpukhov-15”).

During his duty shift that day, the Soviet Union’s Oko early-warning satellite system made a detection that it erroneously interpreted as being an incoming ballistic missile launch from the United States. Thankfully, Petrov did not believe the warning to be authentic, and going against well established procedures, he refused to immediately notify his higher-ups in the military or Politburo political apparatus.

Interestingly, the reason Lieutenant Colonel Petrov did not believe the launch warning datastream coming in from theOko satellite was because luckily, he had actually been heavily involved in monitoring the development of the SovietOko early warning satellite constellation since its earliest design days (due to his rank and expertise, he was the top military liaison between the Soviet Air Defense Forces and the satellite design and testing team during the satellite’s development), and he knew it was a very poor, unreliable system and could not be trusted because, contrary to what the Soviets publicly claimed about Oko at the time, it was highly prone to the threat of giving false-positive detections.

The Oko satellite constellation did not actually detect the initial launch of a nuclear missile, but rather their orbital placement had these sats flying in highly elliptical “Molniya” orbits. This orbital profile allowed the satellites to observe the United States missile fields from high-oblique “look angles”, meaning they observed the target area from the side rather than overhead, looking for telltale infra-red signatures from the rocket motors. Rather than using radar or looking to detect a missile visually as it launched, the idea behind Oko was that once the nuclear missile had reached high altitude and its look angle breached the Earth’s horizon in relation to the Oko satellite, Oko’s onboard IR detection system would be able to pick out the heat signature from the rocket propelling the missile as it burned hot and bright against the cold stellar backdrop of space. Or, at least that is how it was supposed to work.

In the case of this famous incident, there happened to be some high-altitude clouds above the US missile fields that this specific Oko sat was monitoring at the time, and due to the coincidental location of the sun at this instant, these cloud tops actually reflected the sunlight directly at the Oko satellite onboard IR sensor array. The Oko satellite sensors detected that sudden infra-red bright spot “bloom” and, as it was programmed to do, the early-warning satellite interpreted that as an incoming missile and triggered the alarm.

Colonel Petrov was notified of the detection immediately since he was the senior duty officer at Serpukhov-15, and due to his past experience with and understanding of the very low reliability of the Oko system, and from the fact that it was initially only detecting a single IR bloom (signifying only one initial missile detection as opposed to a salvo of many missiles), he concluded that it was most certainly a false positive detection situation. He decided to wait for radar confirmation (which of course never came) before going up the chain of command with the news, and part of the reason for that, Petrov has admitted since, is because he was not sure due to the political climate at the time how the Soviet Politburo political leadership in charge would react. At the time of this incident, tensions between the USA and USSR were rather high, and had been increased further just a few weeks prior because the Soviet military had shot down Korean Air Lines Flight 007, killing 269 civilian passengers and crew.

In regards to this incident, it is worth noting that unlike the USA, the Soviets did not have extensive near-global radar confirmation capability at that time (and they really still don’t). Petrov had to actually wait for quite awhile after the Okosatellite sounded the initial incoming launch alarm that was triggered by its IR sensors before the nuclear missile (which did not exist) would have been close enough to Soviet-controlled airspace that they would have a direct line-of-sight on it to use radar to either confirm the incoming missile, or confirm the Oko detection as a false positive. Obviously, that radar confirmation of an incoming missile never came because there was no incoming missile.

Petrov’s real heroics in that incident was waiting for the radar confirmation before going up the chain of command. He has stated in interviews since that he was sure it was a false positive, and was not at all surprised when the radar screen never picked up a track of anything incoming. At the time, there was a lot of strife within the Soviet political apparatus, and Petrov was well aware of that in-fighting that was going on due to his position as a high-ranking military officer. He simply did not trust the ability of the Politburo higher-ups to (in just the few short minutes they would be given to react) properly weigh the evidence, take into account the reality that the Oko constellation design flaws were so great that the satellites could not be trusted to provide accurate data, then make the correct decision and chose not to order a retaliatory strike before the supposed incoming non-existent missile struck Soviet territory. The MAD doctrine and Soviet planned counter-response to a US first strike scenario required that the USSR try to get at least a portion of their retaliatory strike fired off before any incoming missiles impacted their soil, and Petrov felt that more than a few politicians and military men would have pushed hard to order the launch of a retaliatory strike in those few short minutes they would have had to decide.

What really took a lot of balls was when the Oko alarms went off at Serpukhov-15 and Petrov – a career military man – deliberately chose to not follow the very explicit orders he had which demanded he pick up the red phone and immediately notify Moscow that one of the early-warning satellites was signaling a launch detection and incoming missile from the USA. He knew that HUGE act of disobedience could have ended his career in a heartbeat once it was found out (and maybe even put him in a gulag somewhere in Siberia), but he also knew the signal from the Oko bird had a very high probability of being a false positive and that there was no real threat.

Luckily, after the news of this false positive detection incident came out, many within the Politburo realized that punishing Petrov for disobeying his orders would have negative propaganda results, and since his decision was the right one, they ended up letting his disobedience slide. 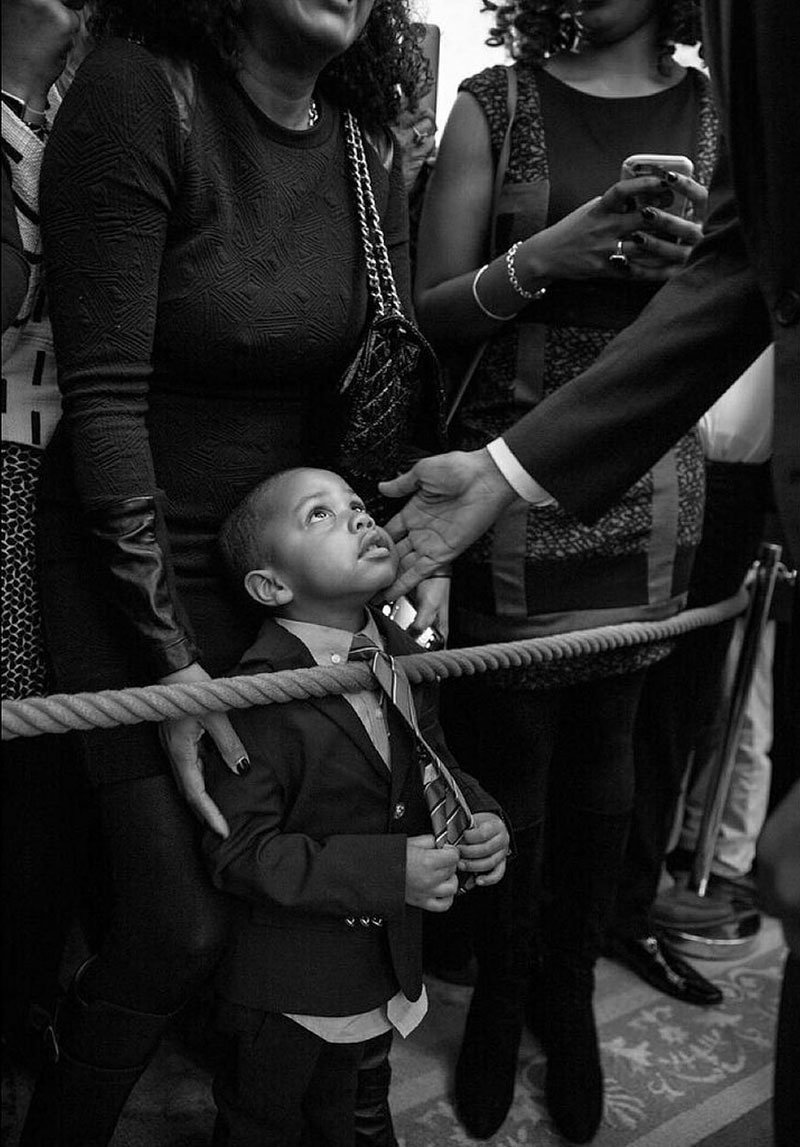 Obama and a little visitor at a Black History Month celebration. 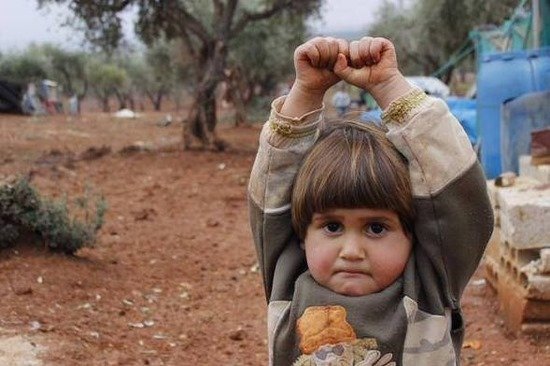 Little Syrian girl mistakes camera for gun and immediately surrenders instead of smiling.

It reminds me of the girl in this photo from WW2 Japan. Apparently her father had told her that if someone was going to shoot her, she had to be waving and smiling when she died. If a soldier is pointing a gun at a child and the child starts waving and acting happy towards them it would be a lot harder emotionally for the soldier to shoot that child. She saw the camera, thought it was a gun and started waving. 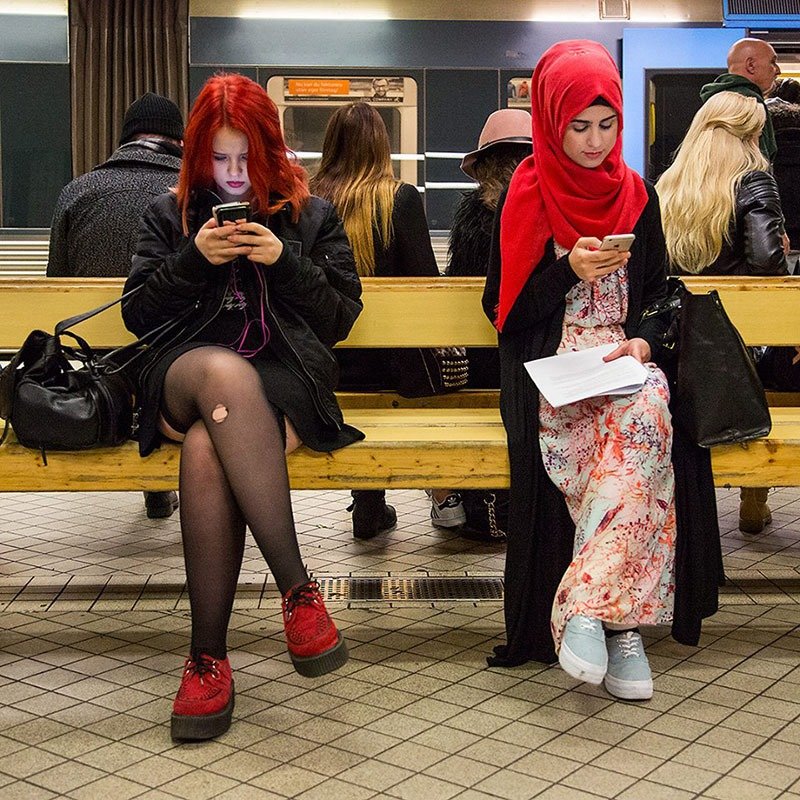 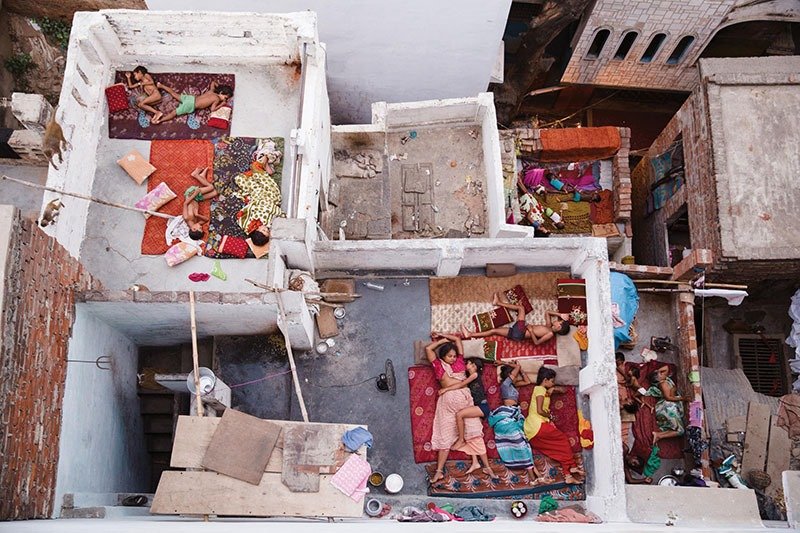 Families sleep on rooftops in Varanasi, India, to escape the summer heat.

There was an article in The New Yorker Magazine about 20 years ago, written by Arthur Miller about what life was like in New York before air conditioning. In summer heat waves, people would sleep out in Central Park, or on their fire escapes. Definitely an interesting read, and well written, of course. 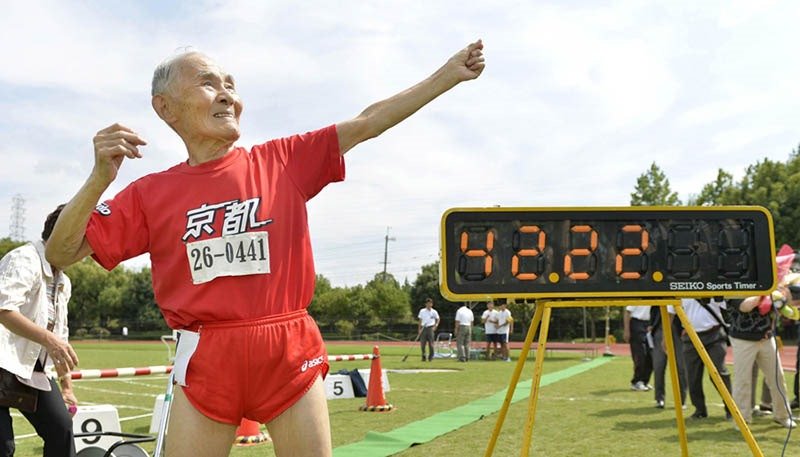 105-year-old Japanese Hidekichi Miyazaki poses like Usain Bolt in front of an electric board showing his 100-meter record time of 42.22 seconds at an athletic field in Kyoto, Japan, on September 23, 2015. 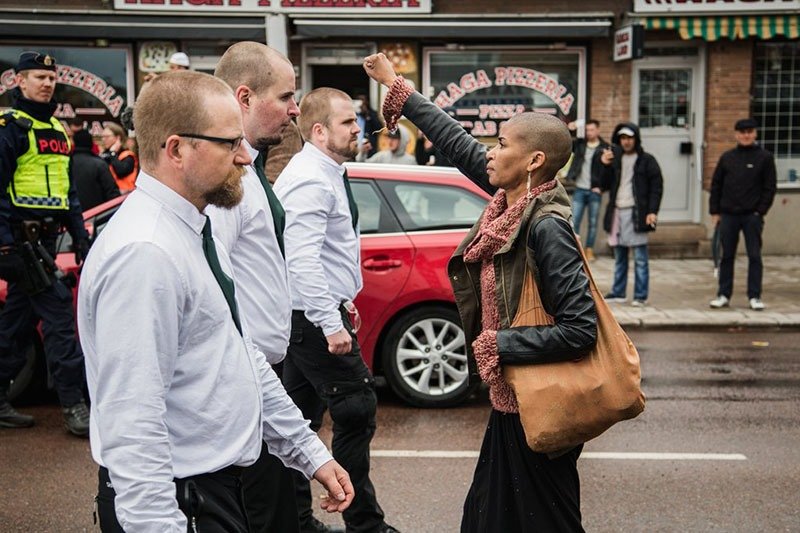 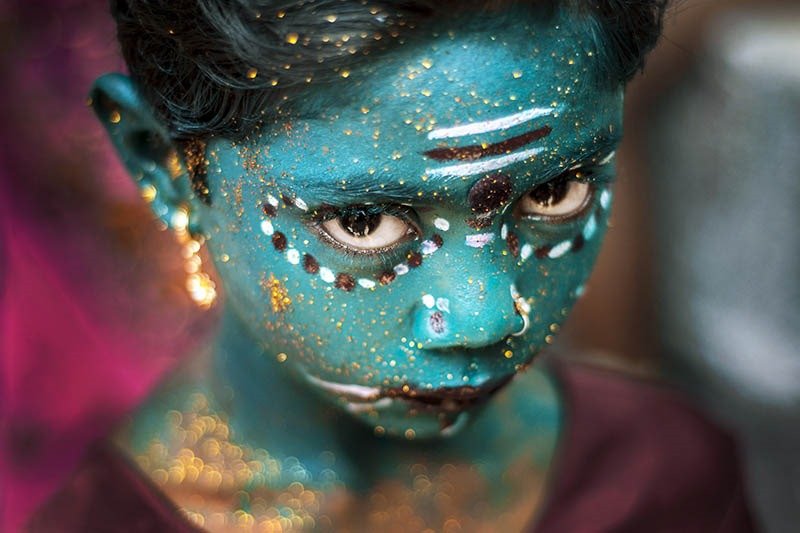 A girl with a face painted in aquamarine during the Maha Shivaratri in Kaveripattinam, India. Photographed by Saravanan Dhandapani 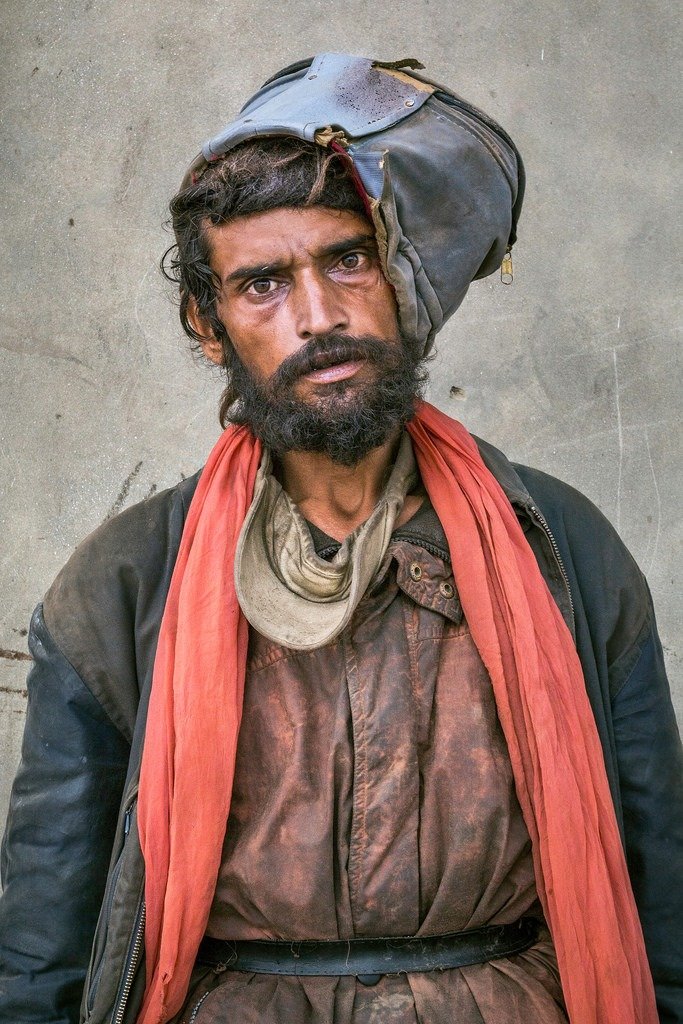 A Pakistani heroin addict with a makeshift hat, Photographed by Sohail Karmani. 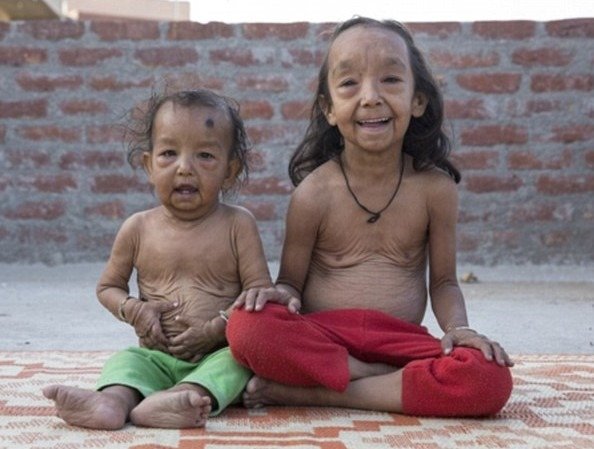