Maps like this are a good reminder that Scandinavia would be like northern Canada without the ocean and air currents. 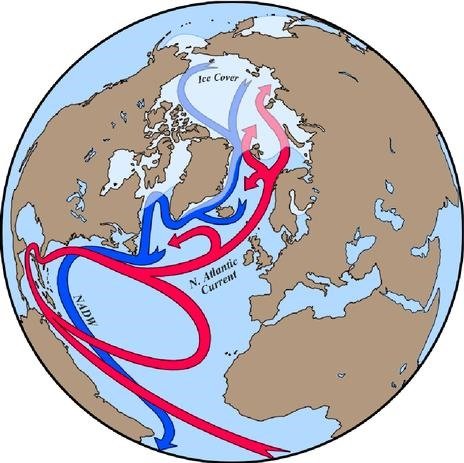 The Gulf Stream is part of the global ocean conveyor, but it doesn’t convey much extra warmth to Europe. The oceans do still play an important role in keeping Europe’s winters mild, but it is nothing to do with the Gulf Stream. The winds that blow northeast onto Europe from the Atlantic carry with them air that is relatively warm even in the winter; the large heat capacity of water means that the sea cools off more slowly in the winter, and this also moderates the temperature of the air above the sea surface.

This contrasts with the eastern US, where the prevailing southeast winds are cold, having lost their heat to the thousands of miles of land surface they’ve already passed over. 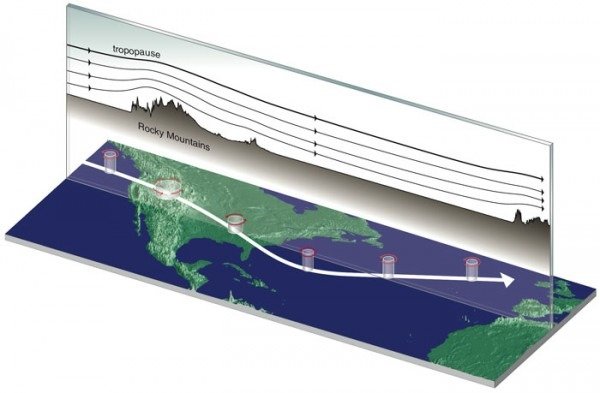 So the oceans are still involved, but it is the atmosphere that is the true key to explaining Europe’s mild winters; and in a pleasing geological twist, it is apparently the presence of the Rocky Mountains that causes the large-scale waviness of atmospheric circulation that magnifies the temperature contrasts on either side of The Pond (Richard Seager explains this in more detail in this more comprehensive piece at the American Scientist).