An accurate view of Roman Carthage(currently in Tunisia, Northern Africa), a city that was built by Julius Caesar on the site of the previously destroyed Punic capital.

After the destruction of Punic Carthage in 146 BC, a new city of Carthage was built on the same land by Julius Caesar in the period from 49 to 44 BC, and by the first century it had grown to be the fourth largest city of the empire, with a population in excess of 100,000 people(It sounds so impressive, until you realize that the entire square footage of Punic Carthage is serviced by just 4 light-rail stations in the modern city of Tunis). It was the center of the province of Africa, which was a major breadbasket of the Empire. Among its major monuments was an amphitheater, built in the 1st century, with a capacity of 30,000 seats.

Carthage briefly became the capital of a usurper, Domitius Alexander, in 308–311. Conquered by the Vandals in 435, Carthage served as the capital of the Vandal Kingdom for a century. Re-conquered into the Byzantine Empire in 533/4, it continued to serve as a Roman (Byzantine) regional center, as the seat of the praetorian prefecture of Africa (after 590 the Exarchate of Carthage) until it was finally destroyed in the Muslim conquest of the Maghreb in 698.

Today, Tunis is home to 10 times as many people of Punic Carthage, and it doesn’t even crack the list of top 100 cities in the world by population. Mankind has come a long way. 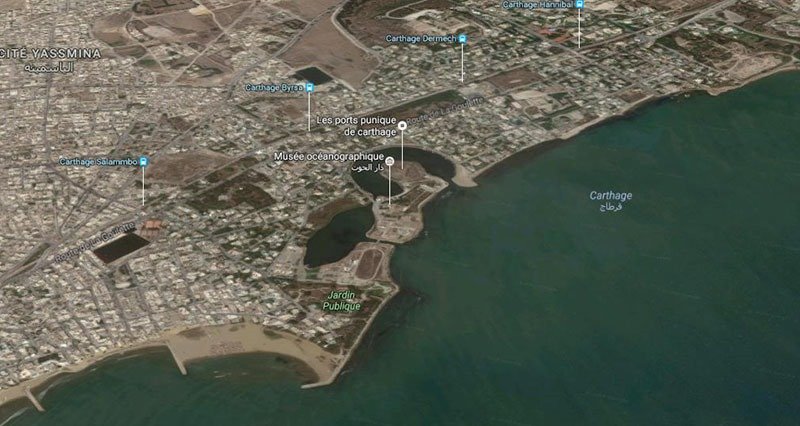 The harbor in the above map is still clearly visible today, albeit eroded a lot. It was actually a naval dry dock factory. The piers (~100) all were built on ramps in a circle around the “roundabout”, and the boats could slide onto the ramps or into the water. If a ship needed repairs, that could be done quickly or they could rapidly deploy. In effect, they were able to “scramble” their entire navy in under an hour. It was a marvel of engineering. As I recall, the Romans breached the main harbor (They had an exterior and interior gate) and were able to fight in the confines of the harbor, negating any Carthaginian advantage.

It was really a shame Carthage was destroyed. It was a democracy just like republican Rome and the ancient Greek city states. The fact that Rome conquered them and later turned it into a dictatorial empire is the reason democracy died for 1000 years. All would have been a lot better if Carthage and Greece would have been allowed to develop independently.

It is actually a pretty great place to visit. The neighborhood around there is still called Carthage and there are still plenty of roman sites to visit.