03. How Google keeps everyone happy 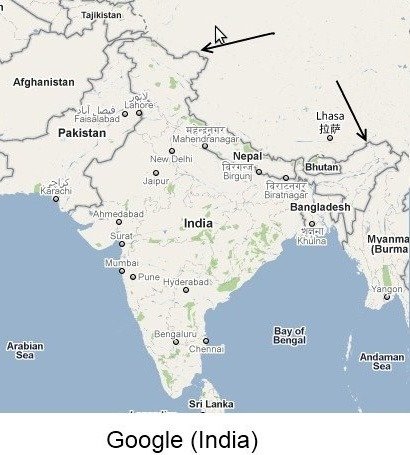 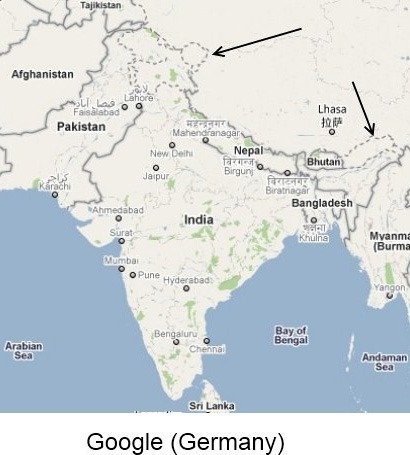 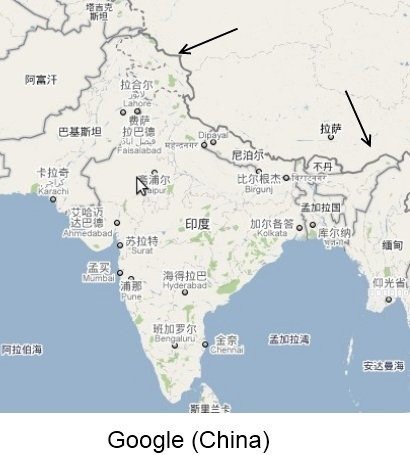 In these three maps from Google you can see how disputed borders of China and India are manipulated depending on the country you are viewing from.

Aksai Chin (the part indicated by the top arrow) is controlled by China. Aksai Chin is just the tiny circle where the arrow points, the rest of the northern region that is dotted is the state of Jammu and Kashmir. Jammu is entirely in India, Kashmir is disputed between Pakistan and India. You can see the Line of Control between India and Pakistan through the middle.  Arunachal Pradesh, the state indicated by the bottom arrow, is administered by India.

Apparently there are actual legal implications for using the wrong type of map in some regions. As in, it can actually be considered a crime against the state. Any map-containing apps that are to be released into certain countries absolutely have to get legal approval.

Interestingly, the very first thing that is listed as not allowed into India on the customs form is maps that depict the incorrect borders of India. This is before things like fruit and large amounts of currency, which top the list of most other countries.

Here are two maps that highlight the politicized name of the body of water between Japan and Korea. In Korea, the map reads “East Sea” and in Japan, the map reads “Sea of Japan” (as it is known in the US).