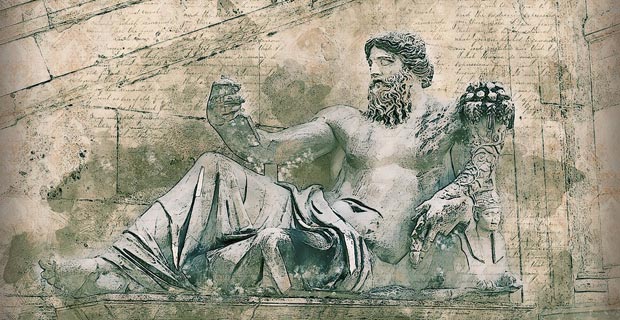 21. There is a fish that when eaten causes severe hallucinations lasting up to 36 hours. It was a party drug during the Roman Empire. – Source

22. In the Roman Empire, prosecutors that brought false accusations to court and then lost, would be branded on their forehead with a K. – Source

23. The Roman Emperor Nero bought a young boy, married him, castrated him and dressed him up as a girl at public events. – Source

24. Cincinnatus, a man was twice given near-absolute authority over the Roman Republic and he twice gave it up. – Source

25. Gaius Gracchus, the ancient Roman politician, had a bounty put on his head to the price of the head’s weight in gold. Although the head was delivered, the prize was never paid, as it was discovered that Gaius’ captor had emptied out his brain and replaced it with molten lead. – Source

26. The ‘Yin and Yang’ symbol was actually a shield design from the late Roman Army and predates Taoist representations by almost 700 years. – Source

27. The first recorded utterance attributable to a native of Scotland was made when a Roman lady criticized the sexual morals of Caledonian women, and a Caledonian woman replied: “We consort openly with the best of men while you allow yourselves to be debauched in private by the worst”. – Source

28. When Constantine, the last Roman Emperor fell to the Turks, he tore off his Imperial regalia before leading a last stand, making him difficult to identify. He was most likely buried in a mass grave with his men. – Source

29. The whoopee cushion was invented by a 14-year old Roman Emperor, who used it frequently on guests. He was assassinated by the time he was 18. – Source

31. Catullus, an ancient Roman poet, wrote a poem criticizing those who considered his poems too racy, and that poem both began and ended with a line that translates to “I will sodomize you and face-f*ck you.” – Source

32. In the Roman Empire, apartment buildings were common and could be up to 9 stories high. While the upper stories were more cramped and the rent was less expensive, the lower floors were more spacious and could have running water, lavatories, and heating. – Source

34. According to moderate estimates, the Romans possibly lost over 40,000 men in a single day at the Battle of Cannae (216 BC), which may have accounted for somewhere between 5 to 10 percent of the total Roman male population during the late 3rd century BC period. – Source

35. Rome has an artificial hill consisting of 80 million ancient, used, olive oil amphorae. Monte Testaccio was in use by the Romans from 140 to 250 AD for disposing of these terracotta pots. – Source

36. Ancient Roman philosophers sported different styles of beards to distinguish which school of philosophy they belonged to. – Source

37. The Roman senator Cato the Elder took the threat of Carthage so seriously that he would end all of his speeches, no matter the subject, with the phrase, “And, further, I think that Carthage should be destroyed.” – Source

38. A Roman envoy stopped the Seleucid invasion of Egypt by drawing a circle around their king and daring him to literally cross the line. – Source

39. In 458BC Roman farmer, Lucius Cincinnatus was named absolute dictator of Rome during crises. After achieving victory he resigned and returned power to Senate. His resignation of absolute authority is often cited as an example of outstanding leadership, serving the greater good and civic virtue. – Source

40. During a Roman Triumph, which was rare, spectacular parades commemorating the honor awarded to a victorious Roman general by the Senate, a slave would have to accompany the honored while whispering “Remember: you will die” into their ear so that they may not let the honor go to their head. – Source

25 Uplifting Headlines of the Week - Part 31

May 27, 2017
Latest Posts
Subscribe to Blog via Email
Did you know?
Loading...
Facts of the Day
Registration is disabled.