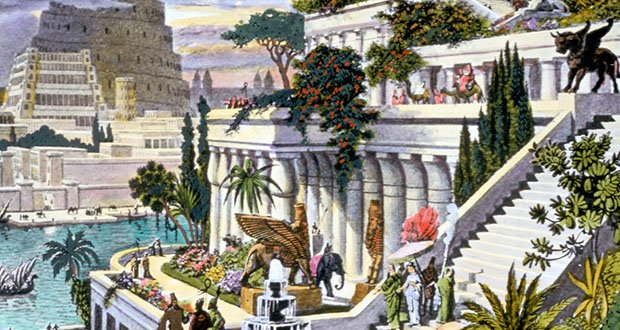 So one of our readers asked us this question the other day: Where does “Seven Wonders of the World” come from? Who coined the term and when? Were they always the same wonders?

The Seven Wonders of the Ancient World were so-called because of the magnificence of their creation. They were constructions that later men and women were in awe of; the work of ancient minds that operated on a grander scale than was thought possible.

Originally, they weren’t called wonders at all, ‘it was not as “wonders” that such monuments were first listed, but as “sights” – not, in the Greek, thaumata(wonders), but as theamata (things to be seen)’. To the ancients, they were the creations of contemporaries, and were essentially written about as an early form of tourist attraction. Travelers were told about them as marvelous things they should take in on their journeys. Many writers mentioned them in their texts, Herodotus being one of the most famous names, and credited with the earliest recording of the sights to be seen.

Over time, as people became more distanced from the creation of these structures, they were viewed with more incredulity or wonder. Clayton and Price write that the common usage in the Greek shifted from theamata (sights) to thaumata (wonder), and it was set. Concurrently, the passage of time provided more perspective on the wonders themselves, and the list was narrowed down by various people. Many people had differing lists through time though. Some wonders weren’t included, while others were. Gregory of Tour had a list that had a heavily Christian influence for example.

Clayton and Price argue that the list which we today call the Seven came about during the Renaissance. I’ve only ever heard of minor differences in the ancient lists and the modern one, the chief being the Lighthouse of Alexandria not appearing in ancient lists. The Renaissance list was fixed at a time when ‘[scholars] could discern with a dispassionate eye the monuments that had really made the greatest impact’ upon the world.

Maerten van Heemskerck illustrated the Wonders in engravings(so maybe illustrate is a bad word?), and this seems to have settled the list as it collected them all visually. However, this was drawn upon from ancient sources that he and other scholars had access to, and is therefore a list that could be missing some fantastic structures.

So to sum up, and answer your original questions. Where does the “Seven Wonders of the World” title come from? It comes from the Greek word for ‘sights’, and evolved into the word for ‘wonder’, which was similar in spelling(and presumably sound).

Who coined the term, and when? The historian Herodotus provided one of the first lists around the time of the Wonders co-existence, and later, it became a collective name that was more fixed by Renaissance artists and scholars.

Were they always the same wonders? No, different historians had different suggestions. Time narrowed the vision to these seven.

Sources: The Seven Wonders of the Ancient World, ed. Peter Clayton and Martin Price, 1988. This is available on Google Books, in chunks at least.

AskUs: How does using water irresponsibly remove it from the water cycle?