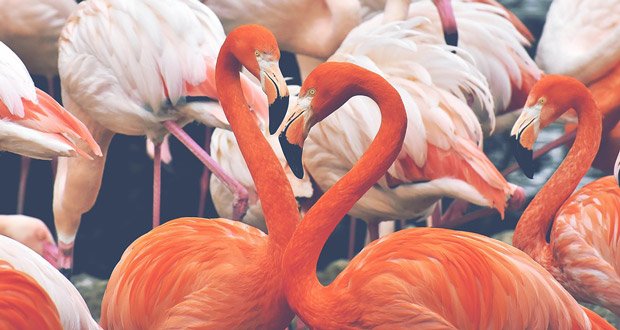 1. Flamingos are not originally pink. They get the color from consuming brine shrimp. – Source

2. The collective noun for a group of flamingos is a flamboyance. – Source

3. The Miami zoo put 30 flamingos in the bathroom during hurricane Andrew in 1992 to ride out the storm. An image of them huddled inside became one of the most iconic from that hurricane. – Source

5. In 2009, the city council of Madison, WI voted to make the plastic lawn flamingo the city’s official bird. – Source

6. Greater, who lived to be at least 83, was the world’s oldest greater flamingo. In 2008, the almost blind bird was attacked and beaten by four teenagers. It was euthanized six years later because of arthritis. – Source

7. Flamingos can sleep in ponds that freeze around their legs at night, drink boiling water, and survive conditions that expose them to arsenic and poisonous gases. – Source

8. A flamingo cadaver can stand upright on one leg without losing balance. It requires no muscle activity to stay in such a pose. – Source

9. Flamingo tongues were considered a delicacy in Ancient Rome, but poets of the time decried the slaughter of the birds for consumption. – Source

10. Flamingos can only eat with their heads upside down, and that they have erectile tissue in their mouths. – Source

11. Flamingos don’t feed their newborn young regurgitated food but instead puke up their own cells from the crop and esophagus made specifically to feed young. The sloughed cells have more protein and fat than mammalian milk. – Source

AskReaders: What’s the scariest story you know that is 100% true?