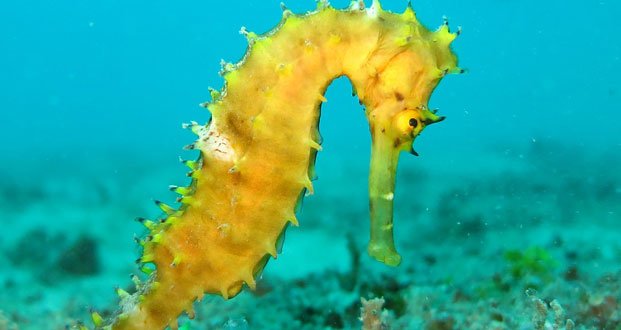 1. A seahorse’s head is shaped to minimize the disturbance of water in front of its mouth before it strikes. This evolutionary “no wake zone” has resulted in a 90% success rate of catching intended prey, one of the highest in the animal kingdom. – Source

2. Seahorses have no teeth and no stomach. They must eat almost constantly to stay alive because food passes through their digestive systems very quickly.

3. Pygmy Seahorses, only the size of your fingernail, change color after birth to match whatever sea fan they land on, regardless of the color of their parents. – Source

4. The hippocampus is named after its resemblance to the seahorse. – Source

5. Seahorses don’t have scales but are covered in bony armor plates with skin stretched over. – Source

6. The Dwarf Seahorse’s top speed is 5 feet per hour, making it the slowest-moving fish. It also grows to a length of about 1 inch. – Source

7. Seahorses mate for life and hold each other’s tails when they travel so they don’t drift apart in the current. – Source

8. Seahorses growl when stressed, especially in response to being captured. – Source

10. Seahorses prefer to swim in pairs with their tails linked together. – Source