31. Most Expensive Letter: 1953 Letter from Francis Crick Detailing the Discovery of DNA 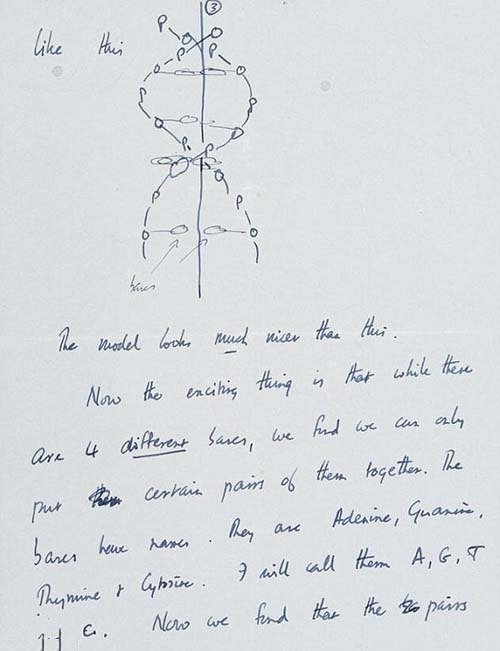 Written by Francis Crick in 1953 to his son Michael Crick, outlining the revolutionary discovery of the structure and function of DNA, this record-setting piece of paper was knocked down to an anonymous bidder in 2013. In the seven-page handwritten letter ‘Secret Of Life to his 12-year-old son, Francis Crick describes his discovery of the structure of DNA as something “beautiful”. It includes a simple sketch of DNA’s double helix structure. The letter began: “My dear Michael, Jim Watson and I have probably made a most important discovery. “We have built a model for des-oxy-ribose-nucleic-acid (read carefully) called DNA for short” and concludes “Read this carefully so that you will understand it. When you come home we will show you the model. Lots of love, Daddy.” Crick, along with James Watson and Maurice Wilkins, was given the 1962 Nobel Prize for Physiology or Medicine for “discoveries concerning the molecular structure of nucleic acids and its significance for information transfer in living material”.

32. Most Expensive Piece of Furniture: The Badminton Cabinet 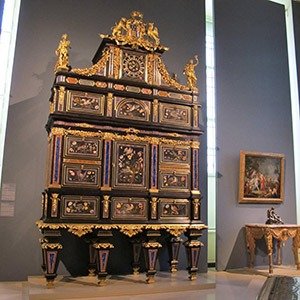 This piece is not actually used for the sport of Badminton in any way, but draws its name from the home of the Dukes of Beaufort, for whom it was made. Executed in ebony, gilt-bronze and pietra dura (essentially mosaics used in furniture), The Badminton Cabinet was made for Henry Somerset, 3rd Duke of Beaufort (who was 19 at the time of his order), by the Grand Ducal workshops in Florence, from 1720-1732, under the supervision of the Foggini family. Standing 386 cm high and 232.5 cm wide (151 ½ inches by 91 ¼ inches, more than 12.5 feet tall), this monumental Cabinet is considered the greatest Florentine work of art of its time, and possibly the most important work of the decorative arts to have been commissioned by a British patron in three hundred years. The Cabinet incorporates an amazing wealth of materials, from lapis lazuli, agate and Sicilian red and green jasper, to chalcedony and amethyst quartz. It was purchased at a Christie’s auction in 2004 by Dr. Johan Kraeftner, Director of the Liechtenstein Museum in Vienna, on behalf of Prinz Hans-Adam II of Liechtenstein for the same museum. 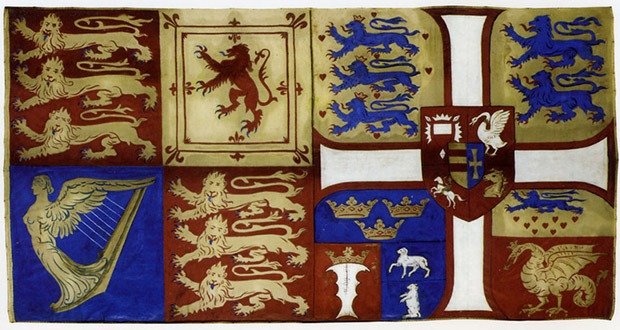 The most expensive flag sold at auction is the Royal Standard rescued by Sir Ernest Shackleton from his doomed ship, the Endurance, which went to an anonymous buyer in 26 September 2002 for £116,000 ($180,600) at Christie’s, London, UK. The flag was presented to Shackleton in 1914 by the dowager Queen Alexandra before he set off on his historic voyage to the Antarctic. The painted silk standard was one of only two things that Shackleton saved from his ship before it was crushed in the winter ice. The explorer then carried the flag inside his coat as he and his men set out on their heroic journey to Elephant Island. Shackleton eventually found help in South Georgia after making a 1,300-kilometer (800-mile) journey across treacherous seas in a small open boat. The National Maritime Museum of the United Kingdom has attempted to purchase the flag several times, but it still remains in private (anonymous) hands. 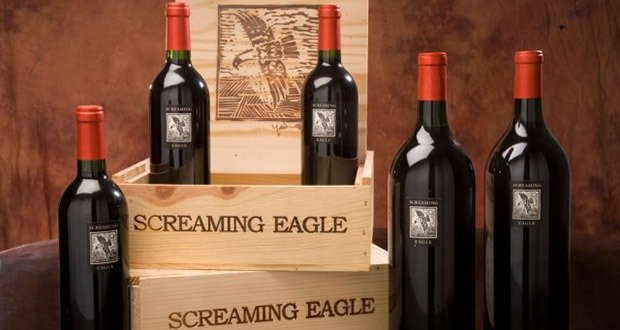 Sold in 2000, a six-liter bottle of Screaming Eagle Cabernet currently holds the unofficial title of most expensive bottle of wine ever sold at auction. It went under the hammer at a charity wine auction in Napa for the staggering sum of $500,000, and was reported to have been purchased by Chase Bailey, a former Cisco Systems executive. However, this record is considered invalid in the wine collecting world, due to its sale as a part of a fundraiser. 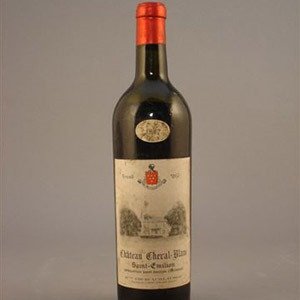 The “official” holder of the title is an imperial bottle of 1947 Cheval Blanc that was sold at auction for the sum of $304,375 in November 2010, setting a world record for the most expensive single bottle of wine ever sold at auction (and the highest of which public record is available). The now 68-year-old bottle, the only known bottle in the Imperial format from this particular Saint-Emilion vintage, was sold to a private collector at Christies, smashing the auction house’s estimated price of between $150,000 and $200,000. 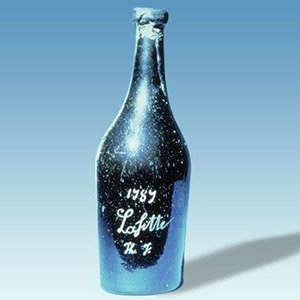 By glass, the most expensive wine ever sold is a bottle of Château Lafite, 1787 that was thought to be from the personal cellar of Thomas Jefferson. At $26,075 per glass, it should probably be saved for a special occasion. 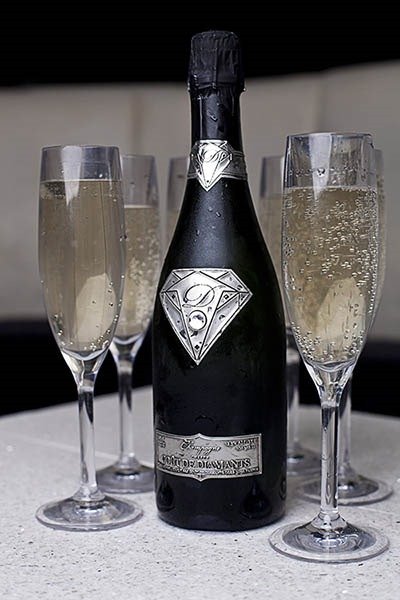 Made from 100% Grand Cru grapes, Goût de Diamants is produced at the 8-hectare, family-owned, Champagne Chapuy in Oger, and some varieties are aged for a minimum of 40 months. But don’t go looking for this in stores, you won’t find it. This brand sells exclusively to high-end bars, restaurants, hotels, and private clients. Each bottle of Goût de Diamants is adorned with a brilliant cut Swarovski crystal in the centre of a diamond-shaped pewter design resembling the Superman logo. That is, unless you’re the lucky purchaser of the unique “Limited Edition” version of this bubbly. The bespoke bottle saw the diamond logo crafted from 18-karat solid white gold while the Swarovski crystal was upgraded to a 19-karat flawless white diamond. The 18-karat white gold front label, meanwhile, was engraved with the client’s name. The champagne inside? Exactly the same.

Continuing the tradition of expensive bottles trumping expensive alcohol, most of the value of this bottle of tequila lies in the container rather than the contents. Made of 3.6 kilos of pure platinum and 6,400 diamonds, this bottle is the creation of Ami Mesika, one of the most prominent figures in New York City’s “Diamond District.” If you’re a bit more conservative, cheaper options exist. The least expensive option sells for $225,000 and comes in a hand-crafted white gold and pure platinum bottle. The logo is also solid platinum. The “middle ground” is diamond-encrusted and fetches close to $1.5 million dollars. There were only a few bottles produced, and somehow they’ve all been sold, meaning you’ll have to track down a billionaire booze hound and try to get him to sell you a bottle for 30 times the median household income of the United States. 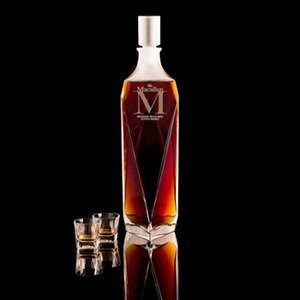 If whiskey is more your speed, you’re in luck; the most expensive bottle of single-malt is the Macallan “M”, which comes in a 6-liter Lalique decanter, and sold most recently in a Sotheby’s auction for $631,850.

37. Most Expensive Group (not Box) of Cigars: 828 Pre-Colombian Cigars 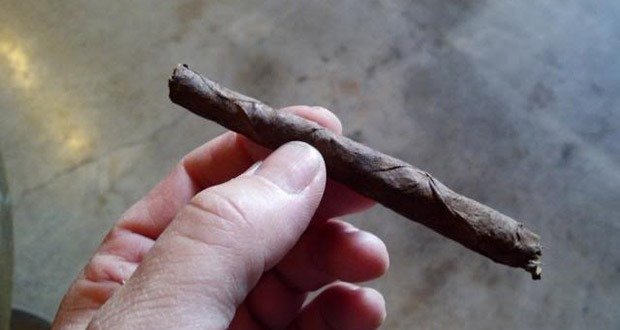 Rather than boring hand-rolled Cubans, the most expensive assemblage of cigars ever sold were found in April of 2012, when a team of archeologists from Tampa University working in the southeast Guatemala unearthed a collection of over 800 pre-Columbian cigars, believed to be at least 600 years old. The cigars were buried several feet below the cave surface in sealed clay pots, each of which bore syllabic glyphs labeling the contents as sicars, meaning, ‘to smoke rolled tobacco leaves.’ The cave in which the cigars were found contained large natural deposits of potassium nitrate, as well as relatively constant temperature and humidity levels, rendering the clay pots in which the cigars were stored into natural humidors. The entire collection was purchased by Gary Liotta, owner of Santiago Cigar Factory, and several have been smoked by professional cigar reviewers. A majority have remarked that they maintain a relatively even burn with a unusually hot flavor, similar to a pepper. 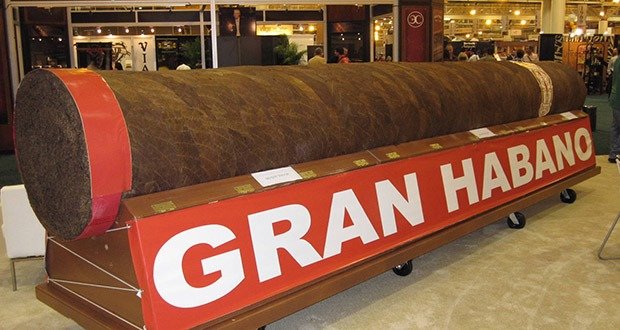 The most expensive single cigar ever sold is the Gran Habano Corojo #5 El Gigante, which is made to order, and contains 1600 pounds of tobacco, retailing for total price of $200,000. It comes with a “suction device” that allows 40 people to smoke the enormous stogie simultaneously. 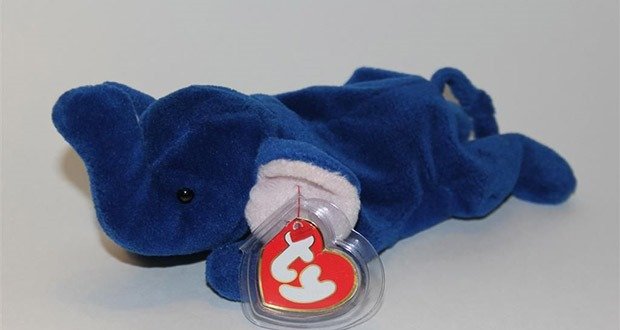 Even if you never played with them, odds are that they will never be worth much; the Beanie craze of the ‘90s, sparked by thoughts that the toys would one day be significant collectibles, has died down to record lows and doesn’t show any signs of resurfacing. This particular Beanie, Peanut the Elephant, was issued on June 3, 1995 and retired on May 1, 1998. However, the royal blue version was only produced (accidentally) from June 3, 1995 to October 1995, and was only made with a 3rd generation heart tag. It is believed that only 2,000 of the royal blue version were produced making it one of the rarest Beanie Babies ever made; this particular example, the most expensive Beanie sold (that I could find a record of), was sold for just over $3000 on an internet auction in 2000. Figures fly about the rare 1997 “Employee version”, of which only 300 were made, and were given to Ty employees and Reps on September 13, 1997 at the Second Annual Appreciation Night, or the “Princess Diana” Beanie, which has been listed on eBay for prices in the tens of thousands of dollars, but has never sold for anywhere near that range. The takeaway here is that you can most likely let your kids play with your old Beanie Babies. 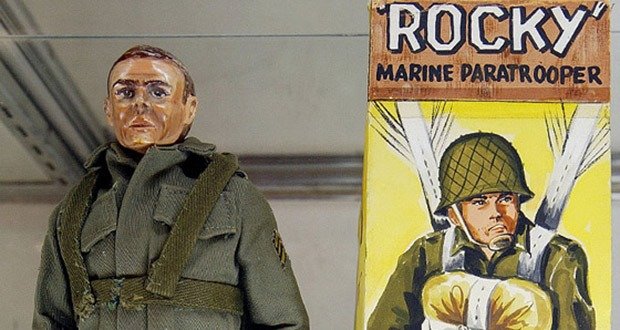 This prototype, carefully constructed of hand-shaped and shaved plastic, hand-crafted metal, and hand-sewn fabric, was the brainchild of Don Levine, Creative Director at Hasbro in the mid-1960s, who developed an idea first proffered by licensing guru Stan Weston, that little boys would play with a doll as much as little girls would — it simply had to be the right doll, and it had to be called an “action figure.” The prototype is crafted and consists of a plastic body with wire-spring joints, a hand-painted plastic head that was created by pulling a temporary mold from a carved wooden original and a completely hand-sewn uniform of olive-drab fatigues and requisite four-pocketed field jacket with a set of hand-stitched, superbly-detailed three-tiered chevrons worn on each shoulder, reflecting the rank of E-5 [sergeant]. Sold in a private sale overseen by Heritage Auctions in 2003, this piece, which serves more as a piece of pop culture than an average collectible, brought $200,000. 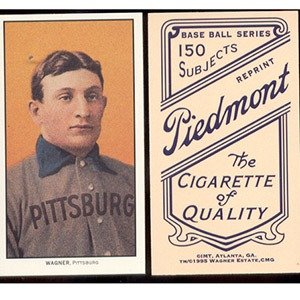 At more than five times the price of the second-place card in this category (a rare Babe Ruth rookie card from his brief career with the Baltimore Orioles, which sold for $517,000), the coveted Holy Grail of baseball cards is the American Tobacco Company’s T206 card of Pittsburgh Pirates player Honus Wagner (sports cards were issued by tobacco companies for approximately half a century before they were used in packs of gum). This card was pulled from circulation after 200 had made it to market because Wagner didn’t want to support tobacco use for his young fans; 57 exist today. A PSA 8 version (highest surviving grade) of the card traded hands with hockey star Wayne Gretzky and others. The card was discovered to have trimmed edges, which would greatly reduce its value, but that didn’t stop Arizona Diamondbacks owner Ken Kendricks to purchase the card in a 2007 auction for $2.8 million. While Wagner himself is not a common name today when thinking about the early, great players of the sport, he is considered to be the greatest shortstop of all time, holds a record eight batting titles, and was one of the first five players inducted into the National Baseball Hall of Fame, with the same number of votes as Babe Ruth. The above image is a modern reproduction of the card.

Could you stand on a gas planet or would you "fall" to the center?