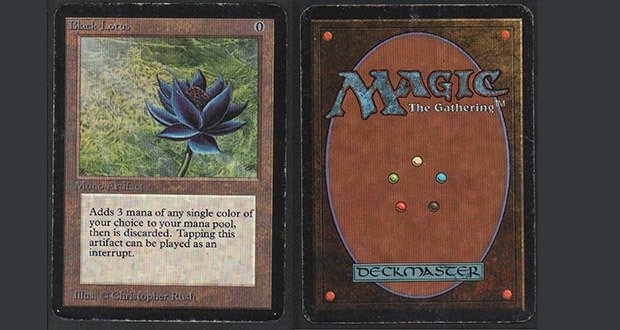 The “Black Lotus” card is part of Magic: The Gathering’s “Power Nine”– the nine most powerful cards printed in the early years of the game (“Ancestral Recall,” “Time Walk,” “Mox Sapphire,” “Mox Jet,” “Mox Ruby,” “Mox Emerald,” “Mox Pearl,” and “Timetwister” are the others). “Black Lotus” cards were printed for the Alpha, Beta and Unlimited sets, with the Alpha being the most valuable because there were only an estimated 1,100 copies printed (the Beta card set run is estimated at 3,300). Though valued for their rarity, Black Lotus cards have been banned from all official tournament styles except Vintage. An example graded 9.5 by Beckett Grading Services reached the price of $27,302 in an eBay auction held in late 2013. 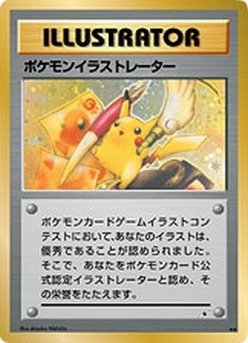 However, this card’s tenure as the most valuable may be short lived; the rarest Pokémon card in existence, has reached a price very close to the Black Lotus in the past. The Pikachu illustrator card, printed just one year after the franchise began and originally created as a reward for fans who submitted illustrations of their favorite characters, exists in just six examples, and a prominent card dealer, Scot Pratte, who owns two of the cards, claims to have received offers in excess of $50,000. But until a card actually sells for a price in that range, the title will remain with the Lotus. 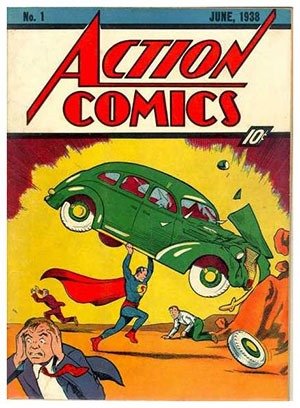 This 1938 comic features not only the first appearance of Superman, Clark Kent, and Lois Lane, but this comic began the entire superhero genre that has followed during the 77 years since. It is referred to as the Holy Grail of comics and this is the finest graded copy to exist with perfect white pages. Accepted as filler material after being rejected by 17 other publishers, Superman’s first adventure was so intent on shoehorning action in that creators Jerry Siegel and Joe Schuster only developed half a page’s worth of backstory for the hero. An original copy of the Action Comics #1 that initially cost 10 cents and introduced Earth to Superman became the world’s most expensive comic book in 2014 when it raked in $3.2 million on eBay. Just two hours after the start of the auction, the price had jumped from its $0.99 starting bid to more than $1,500,000. No other copies of Action Comics #1 have been graded higher and only one other has ever received a 9.0, with an estimated 50 copies remaining in existence. The multimillion-dollar issue topped another Action Comics #1, previously owned by actor and avid Superman fan Nicolas Cage, which sold in 2011 for $2.16 million, and maintains a firm lead over the second-place holder, Detective Comics #27, which brought in $2,200,000 for its most valuable example, and features the 1939 debut of Batman. 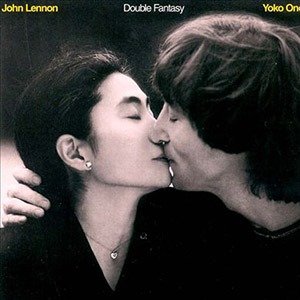 The copy of Lennon’s iconic “Double Fantasy” album, released in 1980 and featuring the former Beatle and his wife, Yoko Ono, currently holds the title of the most expensive music record ever sold. This copy was signed by Lennon on December 8th, for Mark David Chapman, who returned five hours later and killed the former Beatle. Phillip Michael, a maintenance worker, found the album outside the Manhattan apartment building where Lennon’s killer murdered the legendary singer-songwriter just moments earlier. He submitted the album to police, who later returned it to him after an investigation into Lennon’s death on December 8, 1980. The record itself was released just three weeks prior to the end of Lennon’s life, and despite initial poor reviews and slow sales, the tragedy associated with the singer prompted a buying surge, and the album would go on to win the Grammy for Album of the Year in 1981. An original 1958 recording of the Quarrymen, who would go on to become the Beatles, has been evaluated in excess of this price, but the unique acetate disk is owned by Paul McCartney with a very low likelihood of being sold in the near future. 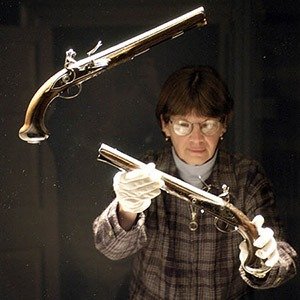 This pair of pistols, marked by Jacob Walster, were owned by President George Washington during America’s Revolutionary War. The young Marquis de Lafayette purchased the pair in Europe and brought them to America when he volunteered to fight for the United States. During the American Revolution, Lafayette presented the pair to General George Washington, who all but adopted him as a son. Washington is believed to have carried them at Valley Forge, Monmouth, Yorktown, and during the Whiskey Rebellion when he was president. He cherished the pistols until his death in 1799. Later, the weapons were given to General Andrew Jackson, who called them “sacred and holy relics” and prized them throughout his presidency and bequeathed them back to the Lafayette family. The guns were purchased at an auction by the Richard King Mellon Foundation, in commemoration of the 250th anniversary of the French and Indian War and the critical role that Washington played in the history of the region and the nation. They are currently on display at Fort Ligonier in Pennsylvania. 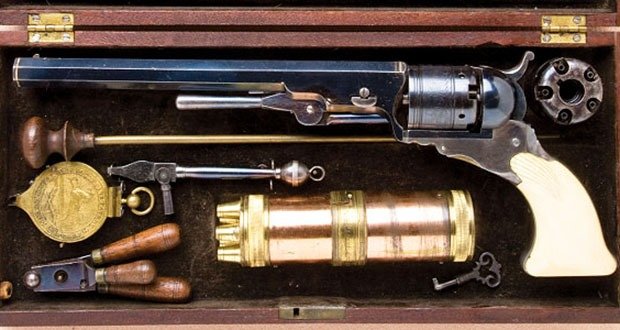 The highest price ever paid for a single pistol is $977,500, for a very rare, ivory-gripped Texas (Holster Model No. 5) Paterson Revolver, the finest known surviving example of Samuel Colt’s first revolver. 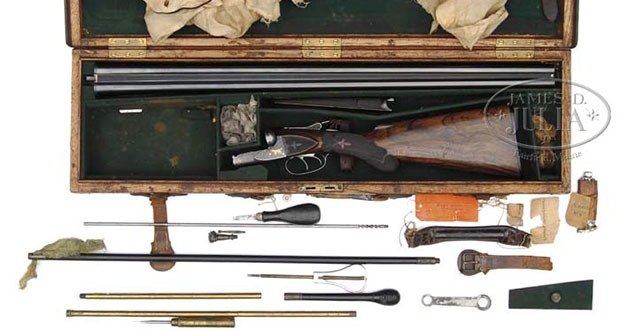 One common misconception about Theodore Roosevelt is that he was fond of hunting. In fact he was totally fanatical, to the point that he said hunting would be the first thing he’d do upon relinquishing his presidency. He wasn’t joking: Roosevelt embarked on a year-long Smithsonian African expedition in March 1909 — the very same month he left the White House. In about thirteen months, Teddy’s party killed and trapped an estimated 11,400 animals ranging from insects to elephants, including six rare white rhinos, for preservation in American Museums. Roosevelt’s epic excursion was all about killing rare species in the name of science and history – morally questionable as that may be – and the shotgun pictured above was part of this mission. The Fox Gun Company made the gun especially for Roosevelt’s safari as he ended his presidential term. That one of America’s most loved presidents remarked “it is the most beautiful gun I have ever seen” (and then got downright trigger-happy with it) certainly fueled its $862,500 selling price at a 2010 Julia Inc. gun auction. Those cleaning cloths — torn slivers of Roosevelt’s pajamas — also certainly added some value. 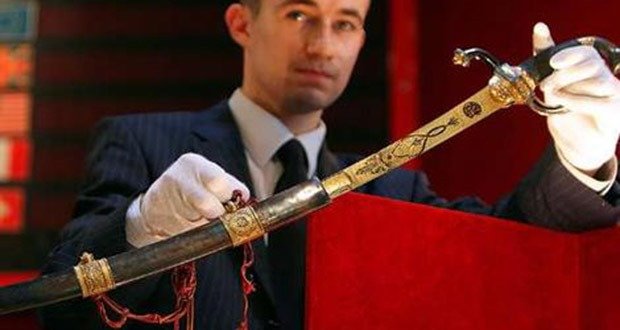 The most expensive antique weapon to have ever sold at auction is a gold encrusted sword used by Napoleon Bonaparte in battle around 200 years ago. The 32-inch sword brought 4.8m ($6.5m) against a 1.2m pre-sale estimate at an Osenat auction in Fontainebleau, France in 2007. Napoleon used the sword at the Battle of Marengo in 1800 to take control of northern Italy from Austria. He had just taken power in a coup and used his victory at Marengo to consolidate his power in France — a history that makes the sword even more valuable. Napoleon crowned himself emperor in 1804. Napoleon was so impressed with the swords used by the Mamelukes in Egypt that he ordered this one made in the same shape upon his return to France, having noticed that the curvature of the blade made decapitations easier. Discord within the Bonaparte family was the reason the sword was on the auction block; part of the family did not want to sell it. The sword was declared a national treasure in 1978 and, while it may be sold to a foreign buyer, they must have a French address and keep it in France for six months a year.

47. Most Expensive Piece of Disney Memorabilia: Film Celluloid from “The Band Concert” 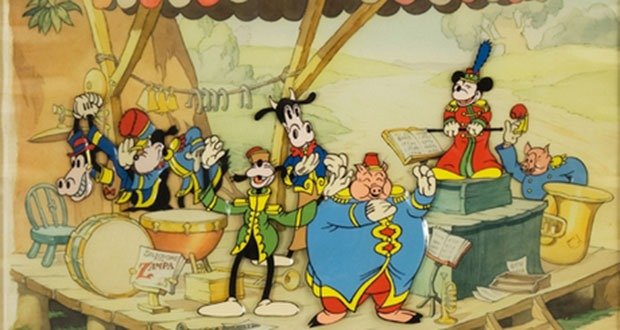 The most expensive Disney collectibles to have been sold has to be the most expensive celluloid to feature Mickey Mouse. The celluloid is from the short animation “The Band Concert” (1935); the first film to feature the lovable rodent in color. Its story follows the charming Mickey Mouse attempting to conduct his band in a rendition of “The William Tell Overture”, encountering many show stopping problems including a bee, a storm and a sales pitch from Donald Duck for popcorn and lemonade. The true value of the celluloid is found in the fact that it is the only one that shows the entire band playing together. It sold for its remarkable price tag in 1999 in a private sale.

48. Most Expensive Antiquity: The Guennol Lioness 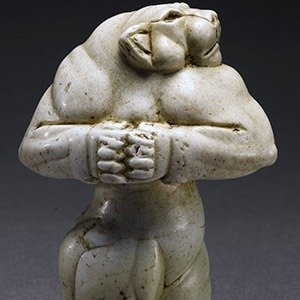 Diminutive in size, but monumental in conception, The Guennol Lioness is of Elamite origin and is thought to have been made between 3000 and 2800 BCE—the same period in which writing systems were being developed, the wheel was being invented, and cities were beginning to rise in the region of ancient Mesopotamia. The figure depicts a standing lioness looking over her left shoulder, her paws clenched in front of her muscular chest. Experts believe that the Lioness would have been used to ward off evil, and that it was probably owned by a person of high social standing. It also must be noted that many Ancient Near Eastern deities were portrayed as figures of both animal and human attributes, encapsulating the Mesopotamian belief in the attainment of power through the combining of the physical attributes of different species. The sculpture was acquired in 1948 by Alastair Bradley Martin and his wife Edith, whose revered Guennol Collection of choice masterworks across countless periods and cultures has been celebrated by scholars and museums for decades. The Guennol Lioness had been on view at the Brooklyn Museum of Art for nearly 60 years and extensively published prior to its sale. 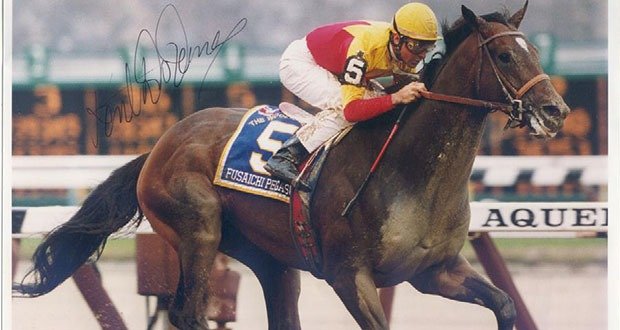 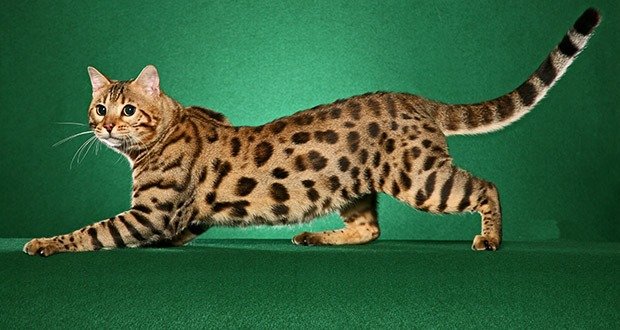 The most expensive conventional cat (excluding big cats) was Cato, a second-generation Bengal (the result of a cross between a house cat and an Asian Leopard cat) who was sold to Cindy Jackson of London by breeder Lord C. Esmond Gay of Bedfordshire, England in 1998. It is unknown if there is any viable rationale for this price, as Bengals typically cost between $1000 and $4000, but Gay is known for selling to celebrity clientele and has been claimed to use unorthodox breeding methods. Cato is known to wear an 18-karat gold and diamond Cartier necklace as a collar. (This record has claimed to be surpassed, but if it has, I could find no evidence of the sale itself). 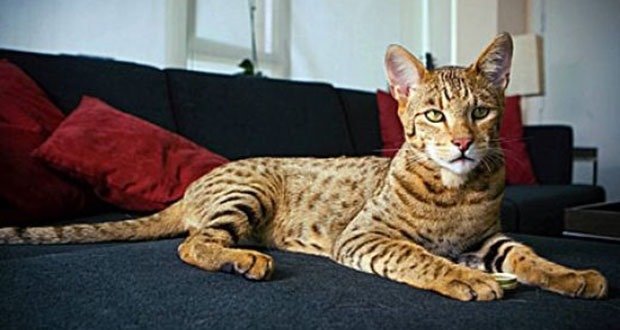 A possible contender for the title, though no specific sale was located, is the Ashera cat, a type of hybrid cat marketed by the controversial company Lifestyle Pets. The hybrid cat breed was allegedly a cross between the African serval, the Asian leopard cat, and a domestic housecat. The truth though — discovered with the aid of DNA testing — was that the “Ashera” cats were simply Savannah cats which were bought from a different breeder and then resold, with prices claimed to be as high as $125,000. Savannah cats are a well-known hybrid cat breed that was created by crossing the serval with the domestic cat; they are the largest domesticated cat breed and are known for their ability to leap approximately eight feet high from a standing position.

If I were traveling at near the speed of light, would I be able to "think" normally?