1. Penguins’ legs are longer than they look and they actually have knees. – Source

2. Male penguins have been observed having sex with other male penguins, dead penguins, and unwilling female penguins. When this was discovered in 1912, it was considered too lewd to publish. – Source

3. Penguins can drink salt water because they have a supraorbital gland, which lets them filter the salt from the water. – Source

4. Emperor penguins are over four feet tall, don’t eat for almost two months during incubation, and can dive up to 1,500 feet in search of fish. But that’s nothing compared to their ancestors who topped out at 6’8, nearly as large as in height and weight to LeBron James. – Source

5. A penguin’s wings act the same way while it’s swimming as a bird do while it’s flying. So penguins essentially fly through the water. – Source 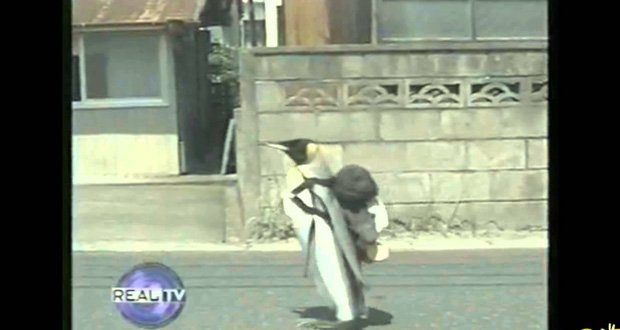 6. There is a penguin in Japan named LaLa who has his own air conditioned room, wears a backpack and walks freely to the fish market. – Source

7. Emperor Penguins can shut down organs that aren’t in use to let them stay underwater for up to 20 minutes. – Source

8. The last Great Auk (the extinct penguin of the Northern Hemisphere) seen in the UK was captured and tied up by 3 men. The men kept the bird alive until a large storm hit the area. Thinking the bird was a witch, they killed it. – Source

9. In 2011, Joao found a penguin (Dindim) covered with oil and nearly dead. He worked feverishly to save his life. Every year since Dindim swims 8,000 KM to meet and live with Joao in Brazil. – Source

10. In order to discover that penguins sleep more deeply in the afternoon, scientists crept up on sleeping king penguins at different times of the day and poked them with a stick until they woke up. – Source

11. The 20,000 landmines used during the Britain/Argentina conflict over the Falklands have led to a booming population of penguins. Cows and humans avoid the fenced-off fields, but penguins are too light to set off the mines. The deadly fields have turned into penguins sanctuaries. – Source

12. A zoo in Germany attempted to have a group of gay penguin couples to behave heterosexually, but the penguins would not participate and longed their mates until they were reunited. – Source

13. At the temperature below -20 degrees C Emperor Penguins form a huddle like the rugby players to stay warm. The temperature inside the huddle sometimes gets so hot (37 degrees C) that some penguins come out or eat ice to cool off a bit. – Source

14. Penguins were once introduced in Norway. One of them was promptly shot by a Norwegian matron who claimed it was a freak of nature that had invaded her yard. – Source

15. Penguins, when depressed (or had enough), tend to travel by themselves on a path of certain death. – Source

16. Female penguins will sometimes engage in elaborate courtship rituals just to run off with a male’s pebbles. Also, prostitution. – Source

17. In 1912 three men set out to recover emperor penguin eggs from Antarctica. It was so cold one man’s teeth chattered so violently that they shattered. When he returned to the UK the National History Museum refused to accept the eggs. – Source

18. There is an island off the coast of Australia where trained Maremma sheepdogs protect a colony of penguins from wild foxes; the first dog used kept the colony from being wiped out. – Source

19. At the Edinburgh Zoo, there is a voluntary daily penguin parade, which sometimes gets canceled if the penguins do not wish to go out that day. – Source

20. Due to the high fat content and a scarcity of available wood, penguins were often used by whalers in the 19th century to fuel the fire needed to melt the whale blubber. – Source